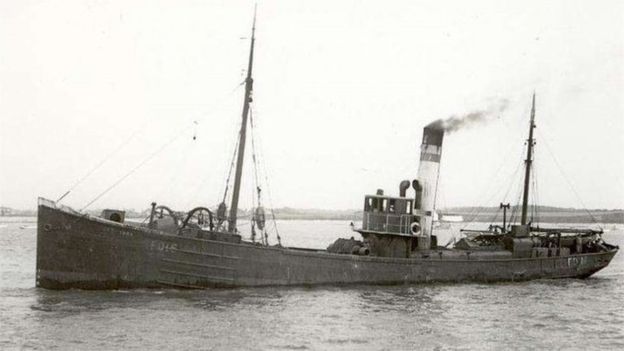 Hit mine when she was sweeping with the trawler VERA GRACE. 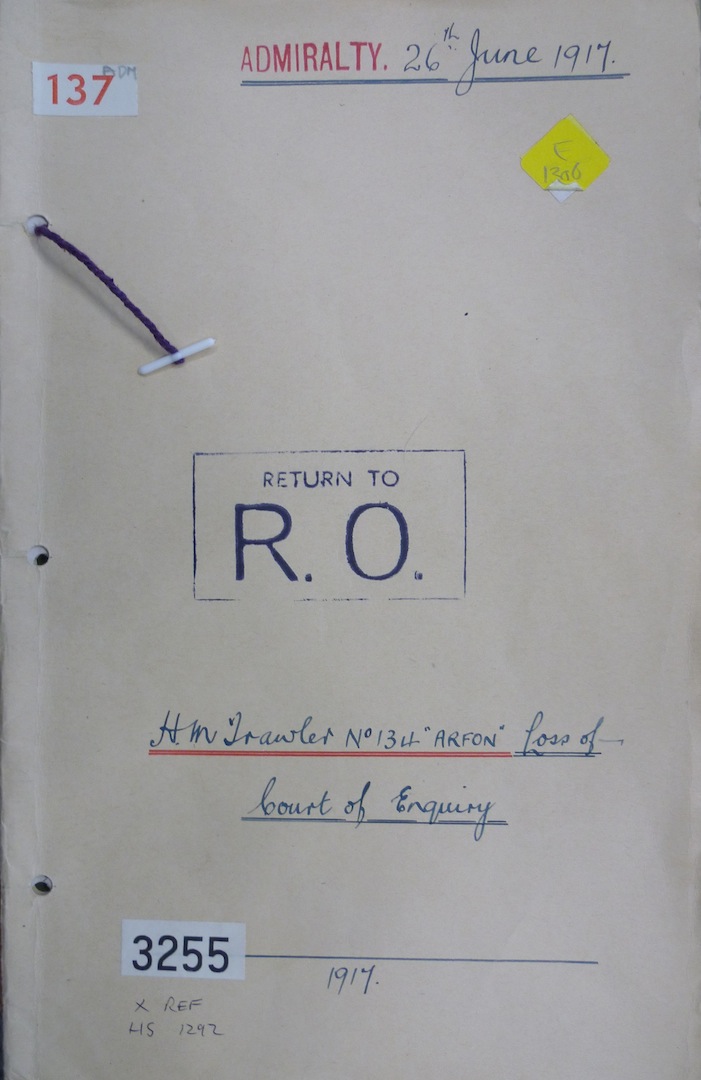 MINUTES OF COURT OF INQUIRY INVESTIGATING THE CIRCUMSTANCES ATTENDING THB SINKING, BY ENEMY MINE, OF H.M.TRAWLER 134 “ARFON” AT 9.45 A.M. 30 TH APRIL 1917.

Q. Do you wish to make any alteration or correction in your report ?.

A I Would like to add that after the explosion two of the survivors were sent on board Trinity House Vessel “Warden” who was on the way into Weymouth. The other survivor I brought into Lulworth and whilst signalling there he was transferred to a Motor Launch for transport to Hospital.

Q. When you heard the first mine being fired at what was your relative position ?.

A. The mine was fired on my Starboard quarter.

Q. Who was sinking the first mine ?

A. Trawler “Alaska”, a Portsmouth Auxiliary Patrol Vessel who was escorting the Trinity Vessel “Warden”.

Q. When you had passed the sweep, what was your relative position to “Arfon ”

A. We were sweeping ENE and “Arfon” was on my Starboard beam i.e. to seaward of me.

Q. When “Arfon ” was blown up did you see the smoke before you heard the explosion ?

Q. How many explosions did you hear ?

A. Two, first under the fore foot of the “Arfon “, and the second when the boiler exploded. 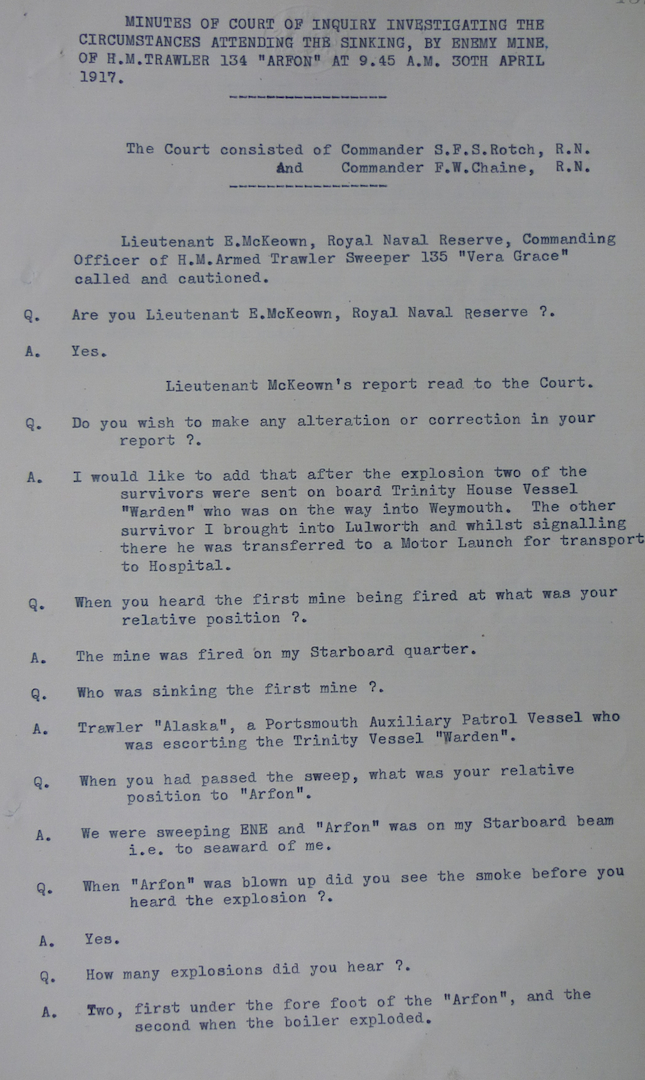 Q. Do you think the magazine exploded ?.

A. No, the second explosion was only smoke, no fire.

Q. Could you see what men she had on look-out ?.

A. Three men, 2nd hand, a leading seaman and a deck hand were all right forward on forecastle.

A. Flat calm and water clear, but the reflected light on the water made it impossible to see below the surface.

Q. What speed was ships going ?.

A. Against the tide, about 6 knots over the land.

A. Yes, in about two minutes.

Q. How do you account for only three survivors being picked up

A. I think they were stunned by the explosion.

Q. Where are the crew generally stationed ?

Q. Had all your men got their life belts on ?.

Q You are one of the three survivors of the “Arfon” ?.

Q. Where were you when the mine exploded ?. 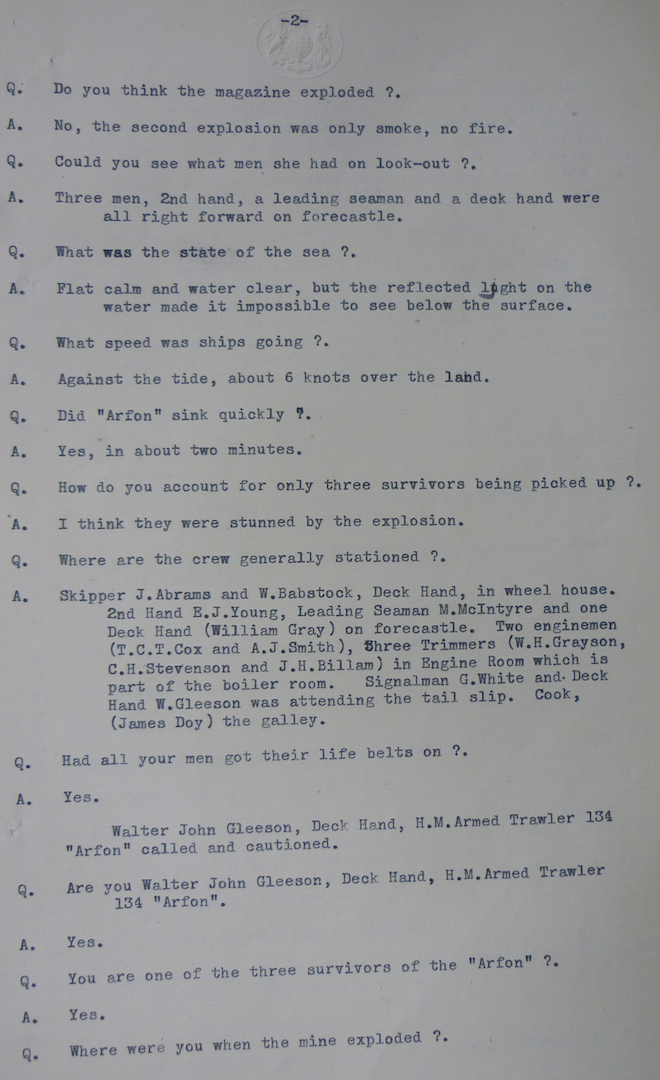 A. Abreast the wheel house. had just knocked off the tail slip and was walking forward the port side. The explosion took place under the starboard gallows and knocked me down. I got up and jumped over the starb0ard quarter and was sucked under. I was afterwards picked up by the “Alaska’s” boat and taken to the Trinity Vessel “Warden” and thence to Portland Hospital.

Q. Did you see any of the crew Jump overboard ?.

A Yes. Cook, James Doy came out or the galley and jumped overboard. He had no lifebelt on as the galley door was too narrow, but he grabbed a lifebelt off the side of the vessel before he jumped. I did not see him afterward. I als0 saw another man jump over the stern and he was caught by the propeller which was still going round, I could not distinguish which man it was.

Q. Was there more than one explosion ?.

A. I don’t know. I was not fully conscious after I was in the water.

Q. Where were you when the explosion happened ?.

A. On the wheelhouse steps.

A. Skipper J. Abrams and W. Babstock, Deck Hand at the wheel.

A. After the explosion I went aft and got a lifebelt but had no time to put it on, as the ship sank. After I was in the water I lost consciousness and was picked up so. Before I was in the water, however, I remember seeing J.F.Billams, Trimmer, aft.

Q. Why were you not wearing a lifebelt ?.

A. I had just come out of the wheelhouse and could not have got out if I had had one on.

By the Court. The third survivor M. McIntyre, Leading Seaman, is still in Hospital. 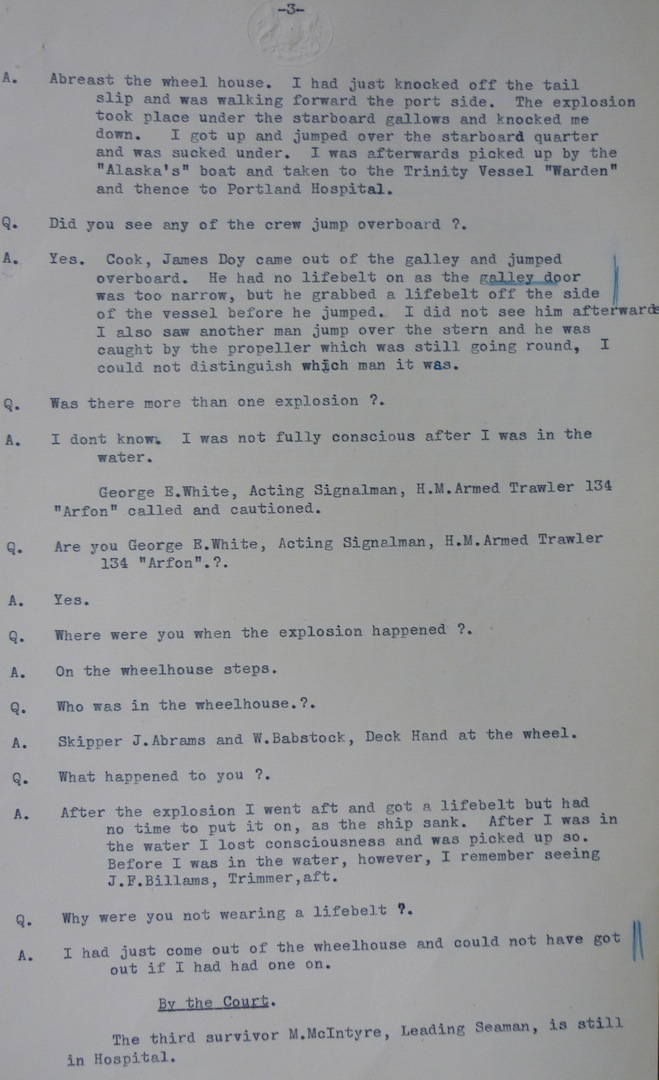 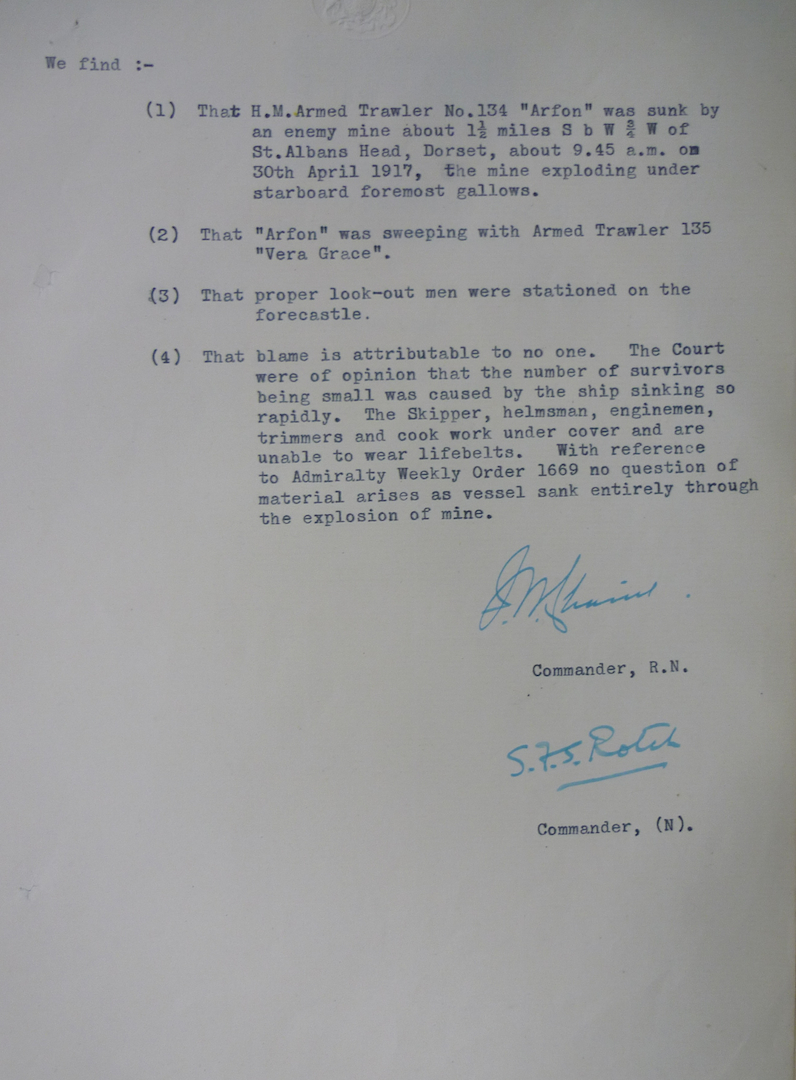