Early on Saturday morning the North German Lloyd mail steamer Dresden, bound from Bremen to Baltimore, ran into and sank, off Portland Point, the coasting brigantine Annie Herris, and four of the crew of the latter vessel were drowned. The sailing ship was on a voyage from Swansea to West Hartlepool, and at the time of the collision was going up Channel, close hauled, with whole sail set. The Dresden struck the Annie Harris on the port bow, cutting her clean in two and carrying away the masts of the vessel, which sank almost immediately. Timothy Biscombe, master, and George Couch, mate, jumped clear, but the other men on board, four in number, must have gone down with the vessel, as they were not seen after the collision. Biscombe and Conch were in the water three-quarters of an hour before they were picked up by one of the Dresden’s boats. They were transferred to a Plymouth fishing vessel, which landed then at 11 o’clock. The survivors state that at the time of the accident the weather was fine and the moon shining brightly. For some time previous to the collision the Dresden was seen by the crew of the brigantine, who frequently sounded the foghorn and fog-signal bell to attract the attention of the steamer. The men drowned are Elliott, able  seaman, Brixham; Porter, able seaman, Lowestoft: Frederick Mace, apprentice, Hull; and the cook, whose name is not stated.

A Reuter telegram from New York, says it has now been ascertained that among the vessels which foundered during the stormy weather that began on the Atlantic coast on the 4th inst, were the British ships Muriel and Mangalore, and the Norwegian ship Aino, seven of the latter’s crew being drowned. 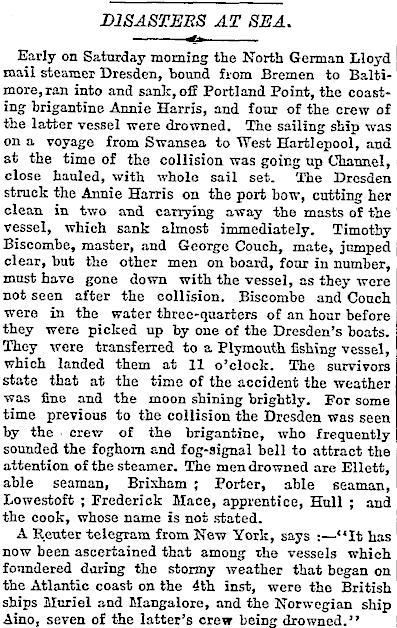