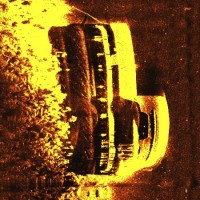 Sonar image of the unit in Portland harbour also showing the hull of a PAS (Port Auxilary Service) boat that went down with it.

These units were part of the structure of the Mulberry Harbour and were designed to provide protection for the concrete units, the Phoenix Caissons.  An experimental floating wave breaking barge, which was powered and star shaped.  It was a Dr F. H. Todd who was tasked with finding a design for breaking up the waves.  He tested numerous designs and models at the large indoor water tanks at the Hydraulics Research centre at Teddington and eventually implemented a plan for two floating breakwaters known as ‘Bombardons’.  They constructed over six miles of these units to protect the temporary harbour.  Valves were incorporated into the design to adjust the buoyancy.  The two units in Portland Harbour are part of this historic construction.  Whether they were reserve units, damaged or scuttled is currently unknown.