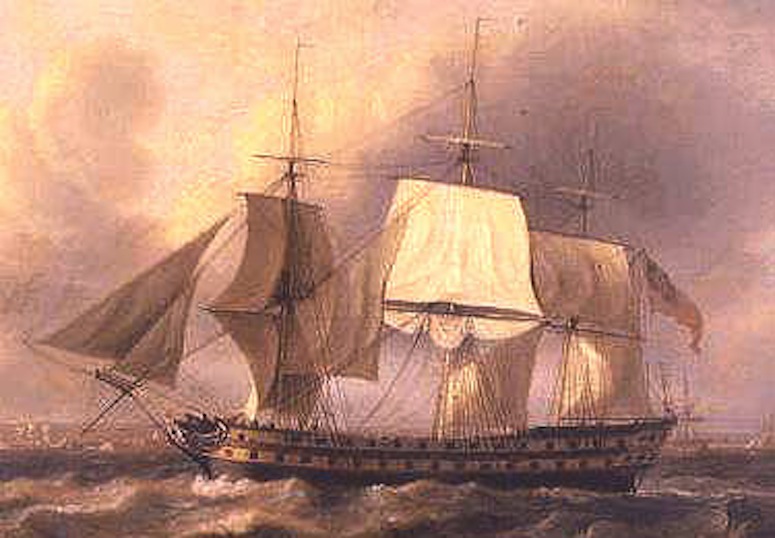 The Earl of Abergavenny

It was the start of the Earl of Abergavenny’s fifth voyage since she was launched in 1797 at Pitchers Yard on the Thames. The whole Wordsworth family had invested a huge sum of money in a very diverse cargo, hoping that the proceeds would enable William to concentrate solely on his poetry. The voyage was ‘jinxed’ as soon as the ship left her homeport of Northfleet, Kent. There were arguments over wages, one crew member was recalled by his wife because of her premonitions of an impending disaster, and a collision occurred in which some upper deck rails and the figurehead were damaged. Finally, after making her way via the Needles in the Solent, the Abergavenny joined a convoy in the Portland Roads under the protection of the frigate HMS Weymouth. After several days of poor weather in which the convoy became dispersed, a Portlander was hired on the strength of his local knowledge as a pilot to guide the ship safely out of the channel and on her way to Bengal and China. Within two hours of his arrival, at 5.00 PM, in daylight and in sight of Portland, he put the ship on the Shambles Reef, the most feared navigational hazard in the area. The ship struck three times and finally stuck fast. Two chain pumps and several hull planks were badly damaged causing a massive leak. John Wordsworth, who was said to have a mistrust of pilots, was heard to exclaim “oh pilot, pilot, you have ruined me”. The ship eventually drifted clear of the reef and headed for Weymouth Harbour. Signal guns were fired on several occasions but for several hours nobody came to the rescue. Troops, who were returning to duty in India, manned the pumps until they dropped from exhaustion.

A report of the day stated “Not one boat was readied and slung out since it was felt that this would distract the men working the pumps”. Another report states “Many seeing the end was nigh attempted to loot the large stocks of liquor but were turned back by armed officers with primed muskets who, in reply to their entreaties for strong drink, said they should ‘die like men”. The leak soon overwhelmed the pumps and at 11.00 pm the ship gave a great lurch and sank. Scores of people below deck drowned immediately; the lucky ones were able to cling to the spars and shrouds that fortunately remained out of the water when the heavily laden ship sank on an even keel. The last quote attributed to Commander Wordsworth by a survivor was “it cannot be helped, God’s will be done”. It seemed to be the general impression of many of the survivors that he made no effort to save himself and went down with his ship.

The loss to the East India Company was enormous; £74,000 in silver dollars, copper, tin, lead, iron, haberdashery, glass, millinery, Wedgwood ware, horse tack, wines, beer, liquors, military stores and, of course, countless other items listed as private trade goods. The publicity at the time was intense and there were several pamphlets written within a few weeks of the tragedy, in addition to newspaper reports, many referring to the tragic loss to the Wordsworth family and the effect on William.

The Coastguard Service and Customs Officers maintained close watch on the wreck. It was not long before the Directors of the Honourable English East India Company sent instructions to their Weymouth agent for him to seek tenders for salvage. The initial contract was awarded to a Mr. Tonkin whose proposed salvage is depicted in a famous print now in the National Maritime Museum. Apparently the massive timbers of this huge East Indiaman beat his diving apparatus and he only managed to succeed in retrieving a few minor items from the wreck. There was, in fact, a public sale in Weymouth that listed items such as anchors, cables, planks, spars and sundry materials.

A new contract was awarded to John Braithwaite who, in the September of 1805, sailed from Blackwall, London, in his salvage vessel Endeavour and arrived at Weymouth on the 23rd of that month. The Log of the Endeavour has survived to this day and it gives a fascinating insight into the salvage operations that were carried out over two years. He recovered all manner of items by removing the ships deck beams which had beaten Mr. Tonkin, using large charges of gunpowder; these items included all the silver dollars which were found in 62 chests. He continued to salvage until, to use his own words, “The cargo got so thin that it was not worth bringing up”.

Explosives during the early part of the 20th century flattened the wreck because it was a danger to navigation in and out of Weymouth and Portland Harbours. The site was re-located by local divers in the early 1960’s and for the third time in the wreck’s history explosives were used to recover a few more items. Unfortunately none of these artefacts appear to have been recorded or displayed.

In 1980 the Chelmsford Underwater Archaeological Unit, now the members of Weymouth LUNAR Society  undertook to excavate the site and record any finds. This group has been active ever since and many of the records are available for reference in Portland Museum.