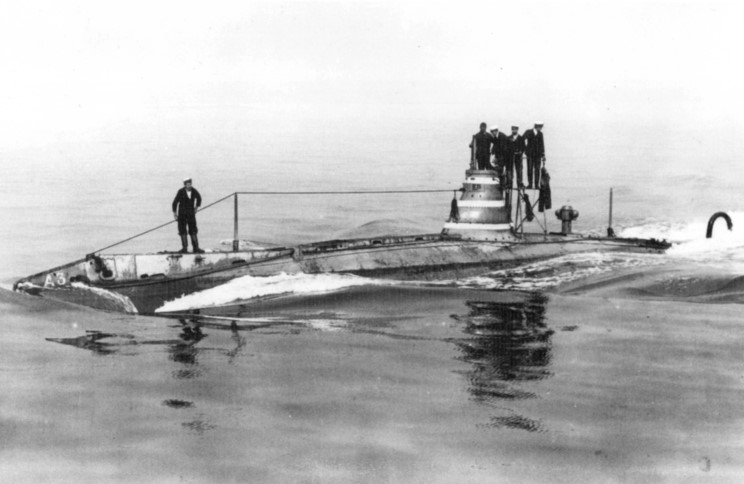 HMS A3 was a member of the first British A-class of submarines, although slightly bigger than the lead boat, HMS A1. She was built at Vickers, Barrow-in-Furness and was commissioned on 13 July 1904.

Left Portsmouth Harbour at 09.30 with several other ‘A’ & ‘C’ class submarines for exercises off Bembridge, Isle of Wight. The exercises had been in progress several hours when A-3 blew her tanks and surfaced directly in the path of the torpedo gunboat the 1070 ton HMS HAZARD. With a large hole torn in her side the A-3 sank to the seabed out of control drowning all 14 crew. She was raised five week later and moved into St Helen’s Bay, IOW. On the 12/03/1912 she was taken to Portsmouth and having been pumped out all 14 bodies were removed for burial at the Royal Naval Cemetery.

Concur in finding of Court of Enquiry. The attack which A3 was carrying out at the time she collided with “Hazard” appears to have been carried out under normal conditions. A good and proper look-out was maintained aboard “Hazard”, and no blame is attributed to any one aboard her. The collision was probably due to an error in judgement on the part of the Commanding officer of A3, in underestimating his distance from “Hazard”. 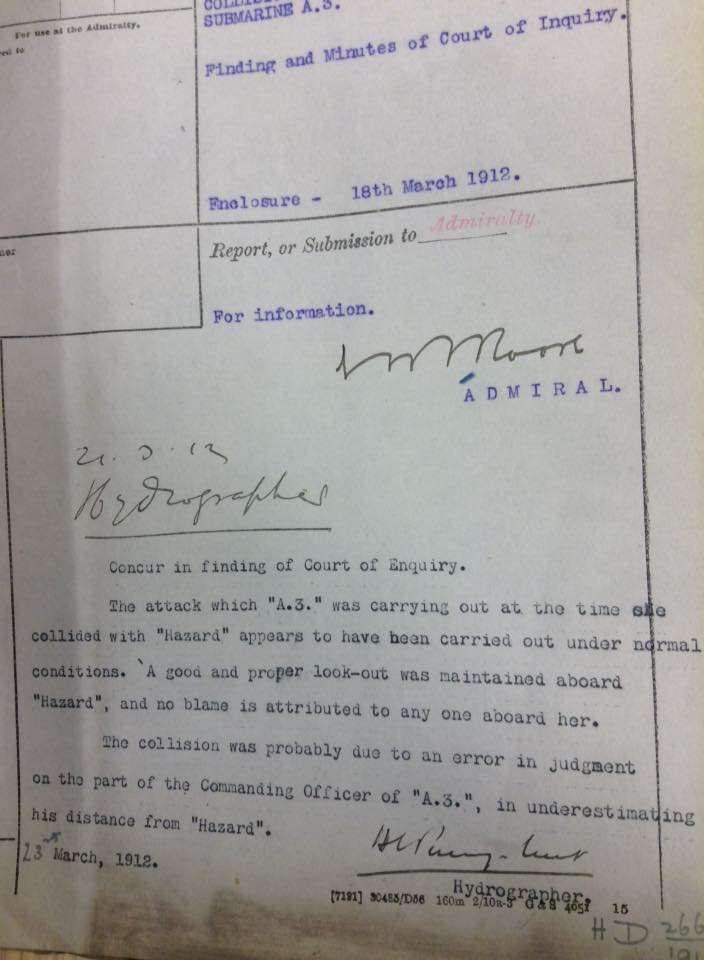 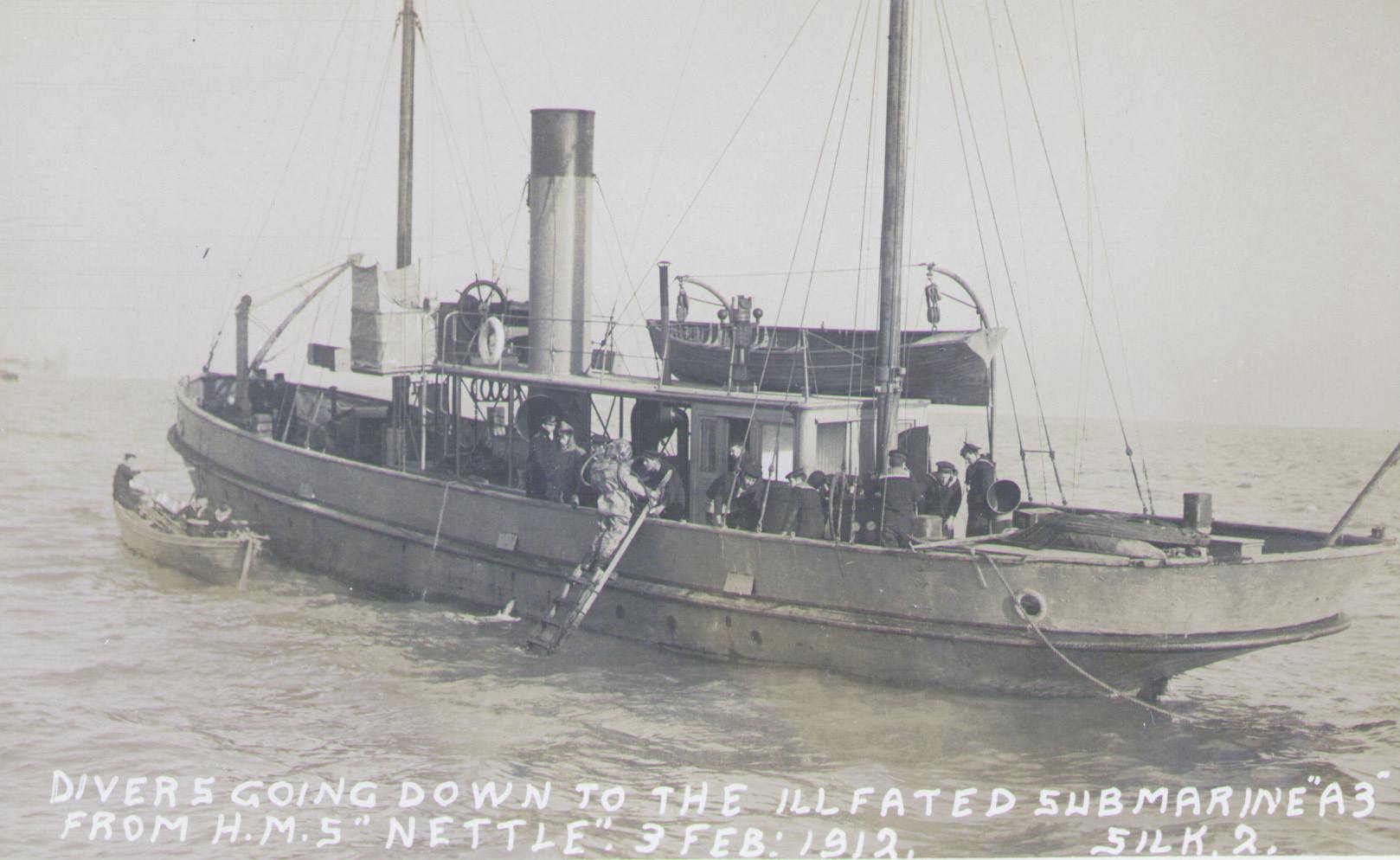 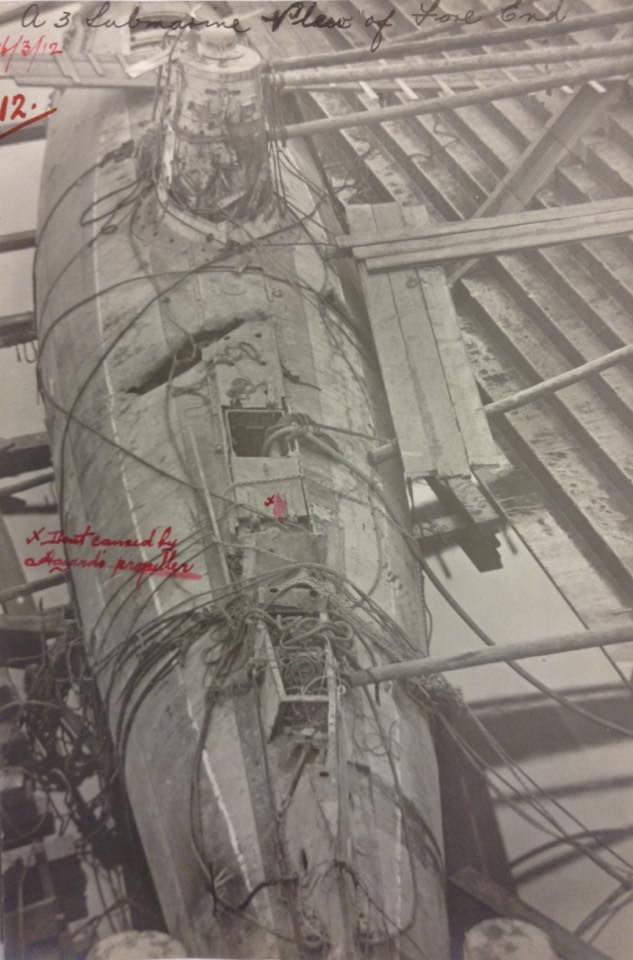 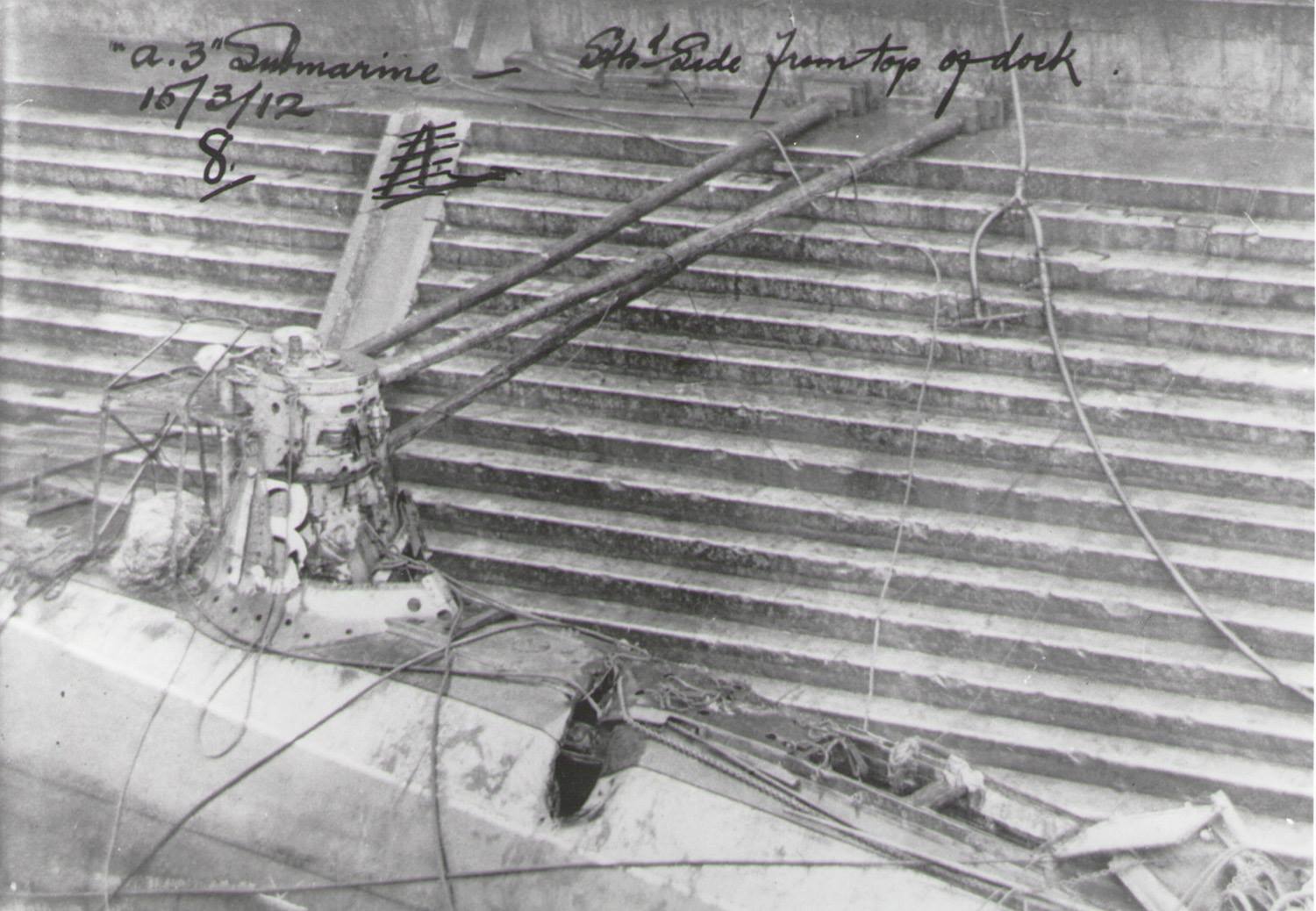 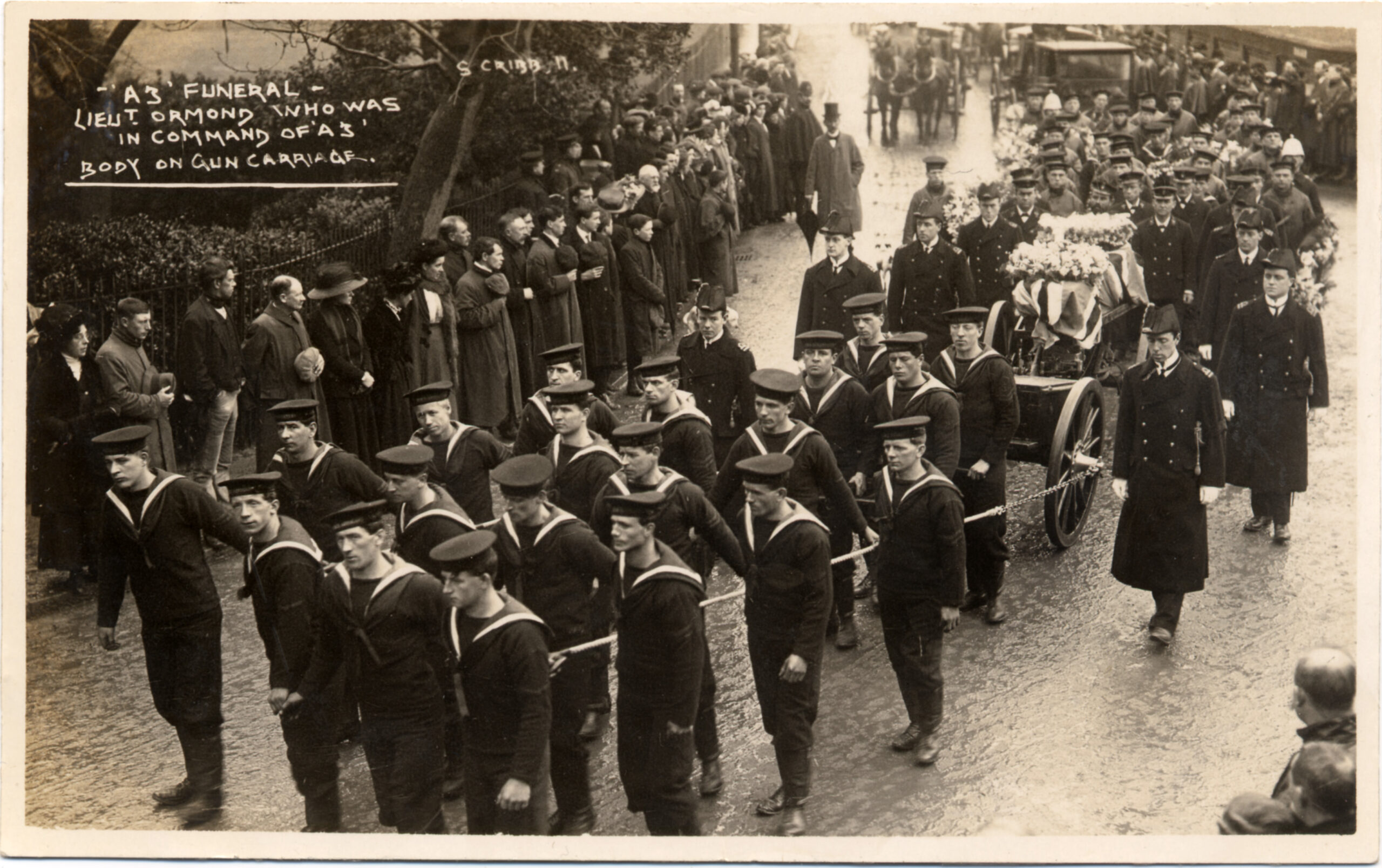 It was September 1989, on one of those rare occasions when the weather and visibility was perfect. We were returning from diving the Aeolian Sky on board Trio, it was her last trip, as she had been sold ready for a new vessel. Tony Williams and myself were in the wheel-house, when on the echo sounder appeared what looked like a submarine in 38 metres. After turning the boat around and searching for a while we managed to locate the object on the sea-bed. A shot was got ready, by this time the tide was running, two 56lb weights were joined together and dropped up tide of the object. We did not need to ask for volunteers to dive that day as Banstead Club were on board and everybody wanted to go down, eventually two members of the club descended to the object below. On investigating they saw what they thought was a U Boat. After much excited talk we returned to the harbour. The next day I rang the submarine museum in Gosport and spoke to Gus Britain who at the time was the archivist and told him what we had found, he was needless to say more than interested. After several more dives taking measurements noting different characteristics of the submarine, a visit to Gosport was needed to talk to Gus. A few agonising weeks passed when the museum rang and told us they had identified our submarine as the A3 built by Vickers Sons and Maxum Ltd. of Barrow-in-Furness. The keel was laid on the 19th February 1902, and she was launched on the 9th May 1903 with a displacement of 180 tons surfaced and 207 tons submerged. Total length was 105ft Sins, beam 12ft 9ins, draft 10ft 8ins, she was driven by a petrol engine developing 450B.H.P.giving a surface speed of 11 knots and 7 knots submerged, her range 360miles at full power, 20miles at 6 knots under water. Her armament consisted of 2, 18 inch bow torpedo tubes, 4 torpedoes (two in tubes and two spare), her total crew was eleven, two officers and nine ratings. On the 2nd February 1912 she was on naval exercises off the Isle of Wight. “HMS A3” with Lieutenant F.T.Ormand in command was in collision with submarine support ship “HMS Hazard’ and was lost with all hands. It was five weeks before weather permitted salvage. The wreck was recovered from near the East Princess Buoy where it had sunk, and the boat still with it’s crew was towed to Gosport. Thirteen of the fourteen victims were buried at Hasler Hospital Cemetery in Gosport, near the crew of the ‘Al’. Lieutenant D.P.C.Craven was buried at Oban Scotland. Lieutenant Craven the regular captain of the A3 was luckily absent on leave at the time. In April of 1912 the salvaged A3was declared unfit for further service. Two months later she was towed and sunk off Portland as a target by HMS St. Vincent, and there she has laid undisturbed until September 1989. The location is approximately 1.5 miles south west of the Aeolian Sky, and best dived on neap tides, very difficult to find when the tide is running. 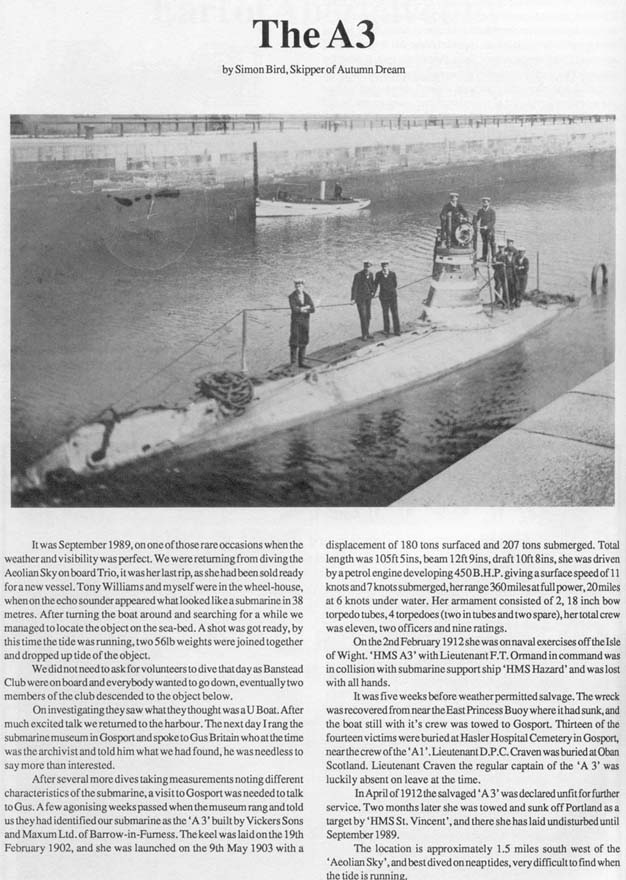 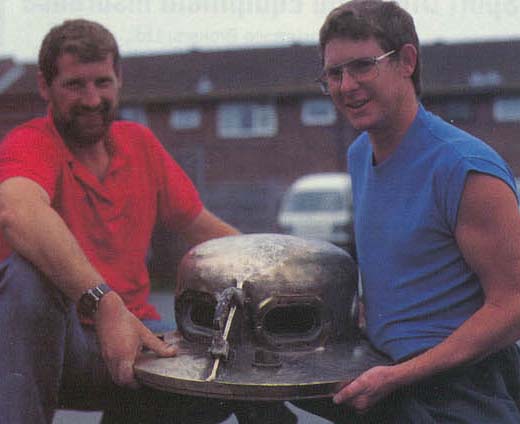