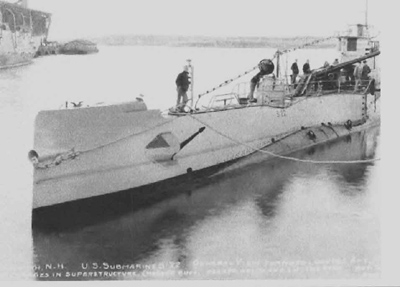 Rod Thompson, skipper of Out-Rage, suggested the P555. Rod has a particular interest in this sub because his father Leslie served on it as engine-room Chief Petty Officer during World War Two.
The P555 was originally the US Navy submarine S24, a design dating from WW1 and transferred to the Royal Navy under Lend Lease during WW2.
Rod found out about his father’s connection with the P555 only in 1992, many years after Rod had first dived it. It was a family Christmas and Leslie was browsing through a copy of Dive Dorset from Rod’s bookshelf when he exclaimed: “I served on that boat. We used to call it the State Express, after the American cigarette brand.”
It was only a short posting in 1944, just six weeks while Leslie’s usual submarine HMS Unbending was being refitted (when he later returned to shipbuilding work on Tyneside he witnessed Unbending being towed in for scrap).
The P555 was nominally returned to US ownership in 1945, but ended up being scuttled as a sonar target on 25 August 1947, about four miles west of Portland Bill.
It’s a perfect diving day and Rod schedules our journey to get on site early, allowing plenty of time to shot the wreck. An intact submarine lying along the tide is not the easiest of targets to shot, because there isn’t much for the shot to hook onto. Rod takes his time and makes three or four drops before he is happy.
We have a few minutes to chill out while waiting for perfectly slack water, then I get to dive first and make sure the shot is in. Rod’s efforts have paid off, and as my eyes adjust to the gloom I see the line draped perfectly across the conning tower.
I quickly tie it in and release the float so that the other divers know it is OK to come down.
The dive averages about 10m deeper than the M2, with the conning tower at 36m, the deck at 40m and the seabed at 45m. I take my time swimming the length of the wreck, knowing that even with an average depth of 40m I will have plenty of time to see it all without getting into silly amounts of decompression.
After 55 years sitting in the current off Portland Bill, the P555 remains in almost pristine shape. Some obvious bits like propellers and the 4in deck gun were removed before it was sunk, the wooden deck planking has rotted and some of the thinner metal trim has rusted through, but you don’t get many wrecks in such good condition as this.
Hatches are intact, periscope housings in place, propeller-shafts and control rods stick out of the stern alongside intact hydroplanes and rudder. At the bow the forward hydroplanes are retracted, with a small anchor recessed on the starboard side and four torpedo tubes below, two on each side. A wedge-shaped section is missing from the upper tip of the bow; I would guess that this is where the sonar was removed.
Sessile life is a dense covering of hydroids with a scattering of small anemones, particularly at the bow and stern.
Just about every dive boat in Weymouth has a diver lift of some sort, and many have electric or hydraulic cage/platforms at the stern. Out-Rage has what I would describe as the KISS approach to diver-lifts, a hinged spine ladder with a line to the lower end taken over a pulley to the capstan.
I step onto the bottom rung and the ladder is lifted horizontal to the gunwhale, where I just step off into the boat. Simple and it works.