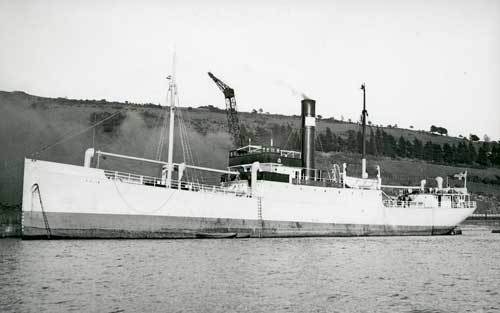 On July 9-1942, Kongshaug was commodore ship for convoy WP-183, on a voyage from Swansea to Poole with 1250 tons of patent fuel, having departed Swansea on July 7-1942. On board were 17 crew and 5 naval personnel. An unidentified aircraft was observed on the 8th but nothing further happened until the following morning, July 9 at 01:00 when she was torpedoed on the port side just n front of the bridge by the German E-boat S-48 (Mirbach),. The ship immediately took on a list and the crew was ordered to the lifeboats, but she sank so quickly they had to jump overboard. Only 30 seconds after the explosion the captain, who was on the bridge, was standing in water up to his waist and started to swim away, but was entangled and pulled under with the suction, though managed to get himself free and to the surface, only to get pulled under again. When he came up the second time he found himself close to some debris and held on to that until he was picked up by the escorting British destroyer Brocklesby about half an hour later. He was extremely saddened to learn that 8 men were missing, 6 Norwegian crew and 2 British signallers from the commodore staff.

2nd Mate Johannes Strømmen had attempted to assist Steward Eritsland and Able Seaman Augustsen and some others in launching the starboard lifeboat, but the ship listed so heavily to port that the boat got caught and he ended up between the ship and the forward davit and was pulled under. When he came to the surface he found a mattress to hold on to, as well as a box of lifebelts to support him until he was picked up by the destroyer about 45 minutes later. The 2nd engineer was last seen by Able Seaman Numme, who later stated that he appeared to have been paralyzed by shock. He had managed to get him aft and under cover, but had to leave him to help lower the starboard lifeboat and never saw him again. Numme jumped overboard with the others who had tried to launch this boat, and was on a raft until picked up. Able Seaman Haavik (helmsman at the time; he had only been on board for 6 days) had also been among those who tried to launch the lifeboat, had jumped overboard and had been floating on his lifevest until the destroyer picked him up after I 1/2 hour, he was unconscious when rescued. Stoker Berge had been asleep when the attack occurred. He was on the raft with Able Seaman Numme and another able seaman until picked up by the destroyer.

BrockIesby landed the survivors at Portsmouth that afternoon. The captain was admitted to the naval hospital as were the 2nd mate and some of the others from the crew, as well as the Commodore. Apeland was anxious to go into town to see to the rest of his men, but was under strict orders to keep to his bed as he could get a “secondary shock”. He told the staff that he had no need whatsoever tor such a thing, he had already had plenty. Eventually he was allowed into town where he found the rest of the crew, none too pleased as they had been placed in a “lousy Seamen’s hostel, with bad food and not a shilling to their name. Apeland borrowed some money from the agent which he distributed among his men, whereupon they were instructed to meet him at the station that evening so that they could travel to London. The maritime hearings were held there on July 17-1942 with the captain, the 2nd mate, Able Seaman Numme, Able Seaman Haavik and Stoker Berge appearing. 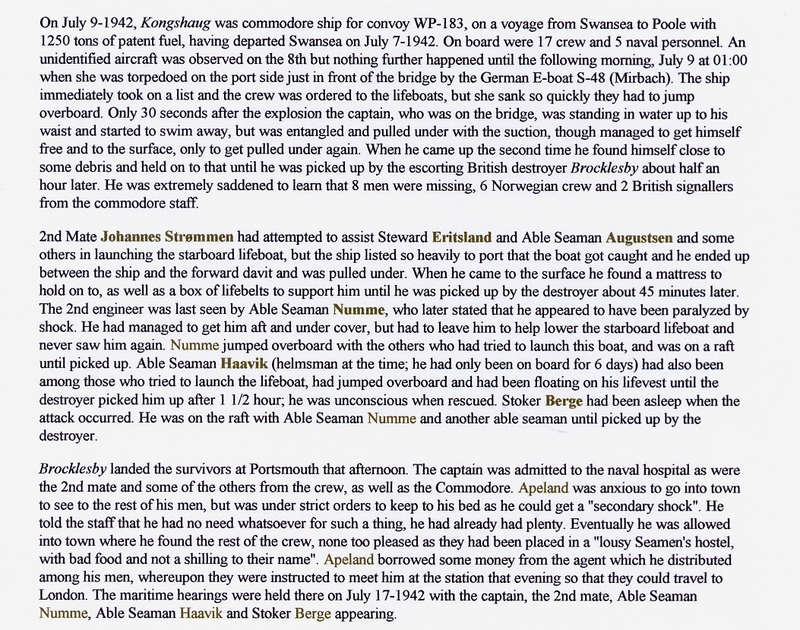