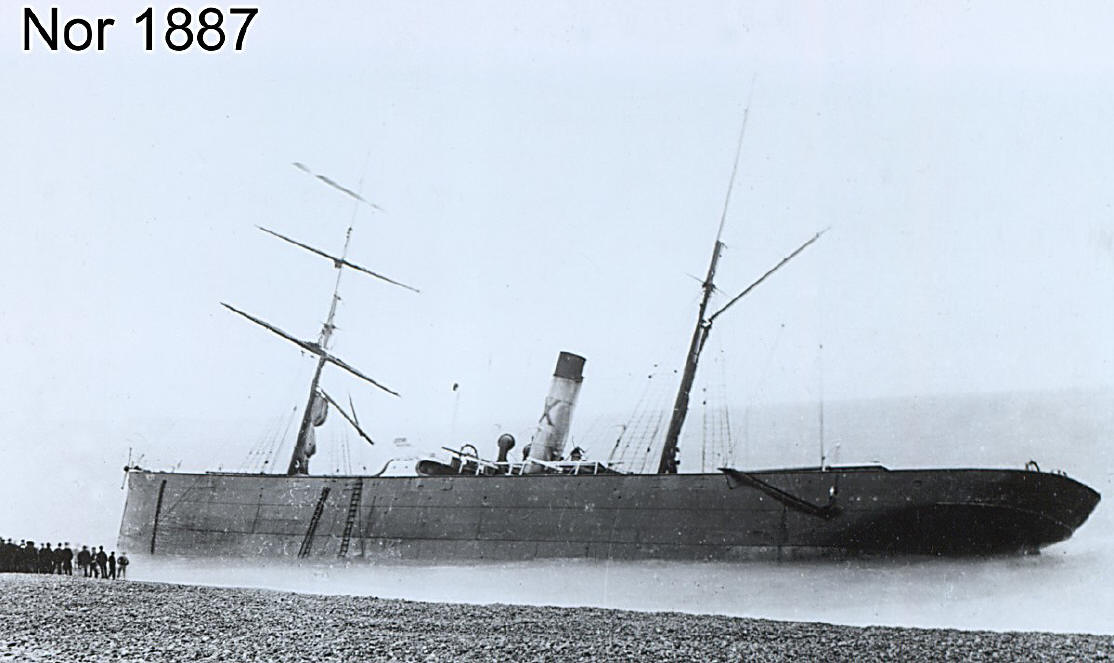 “WRECK OF A NORWEGIAN STEAMER Another vessel, this time a steamer, is to be added to the long list of those wrecked on the Chesil Beach. The unfortunate craft is the Norwegian schooner rigged steamer NOR of Bergen, Captain H. Sianoe (Larn has H. Svance?), on a voyage from Cadiz to the former port with a cargo of salt. The NOR is of 943 tons register, and carried a crew of 20 hands all told. She left Cadiz on Wednesday morning and had fine weather until Tuesday morning, when a dense fog set in, and during this, as she was making for Portland for coals, she ran on the Chesil Beach not very far from the spot where the ROYAL ADELAIDE was wrecked some years ago. So dense was the fog that until the steamer ran heavily into the beach there was nothing to show the dangerous position those on board were in, and it was not until the NOR grounded with a loud grating noise that the captain and crew had any idea of where they were, The engines were then reversed, but every attempt to move the vessel proved futile. In order to attract attention the steamer whistle was blown continuously and at last the attention of a coastguard was attracted by the sound. Information was conveyed as soon as possible to the coastguard station below the hill, and some men and the rocket apparatus were at once despatched. Without much difficulty the whole of the crew, including also a dog and cat, were safely brought on shore, and found shelter at the Sailor’s Home at Weymouth. Fortunately the sea was calm at the time, otherwise in all probability the ship would have gone to pieces very soon after beaching. As it was, before the crew left her, she was very much holed and was about half full of water. Later in the day some men went on board of her and assisted in removing all the gear and other movable things, but there is no doubt with the first heavy weather the NOR will speedily become a total wreck.

DCC: 27/01/1887; “WRECK – The unfortunate steamer NOR, which went ashore on the Chesil Beach as stated in our last, became a total wreck in the course of the day on Wednesday. Towards the afternoon the wind increased, and as time wore on there was a rather heavy sea, which at times broke some way up the beach, submerging the vessel, and lifting her from her position only to settle down again. As each wave broke over the stranded ship the rending of her plates could be distinctly heard, and about 3.30 the first indication of her parting was observed by a crack in her plates about midships. After a few more waves had gone over her she parted, her masts falling by the board, and in a very few minutes afterwards there was nothing left of her. The beach was strewed with wreckage, but nothing of any value came on shore. Amongst some of the live stock saved from the steamer were several black geese and a pig, but the latter, though escaping death from drowning, met with the fate of all pork soon after being landed. Supt. Gale and several of the County Constabulary were on the beach. Mr. C.F. Arden, the Norwegian Vice-Consul and Lloyd’s agent, superintended the landing of the gear, being assisted by Mr. W. Butt, hi