Written off (destroyed) 29/5/1928 when force landed into the sea at Weymouth Bay, off Weymouth, Dorset 29/5/1928 after failing to pull out of a spin. Pilot and registered owner, Flying Officer Arthur Gabbetis Cooper (RAFO, aged 39) killed. Passenger, Ernest Francis Carpenter was injured, but rescued. 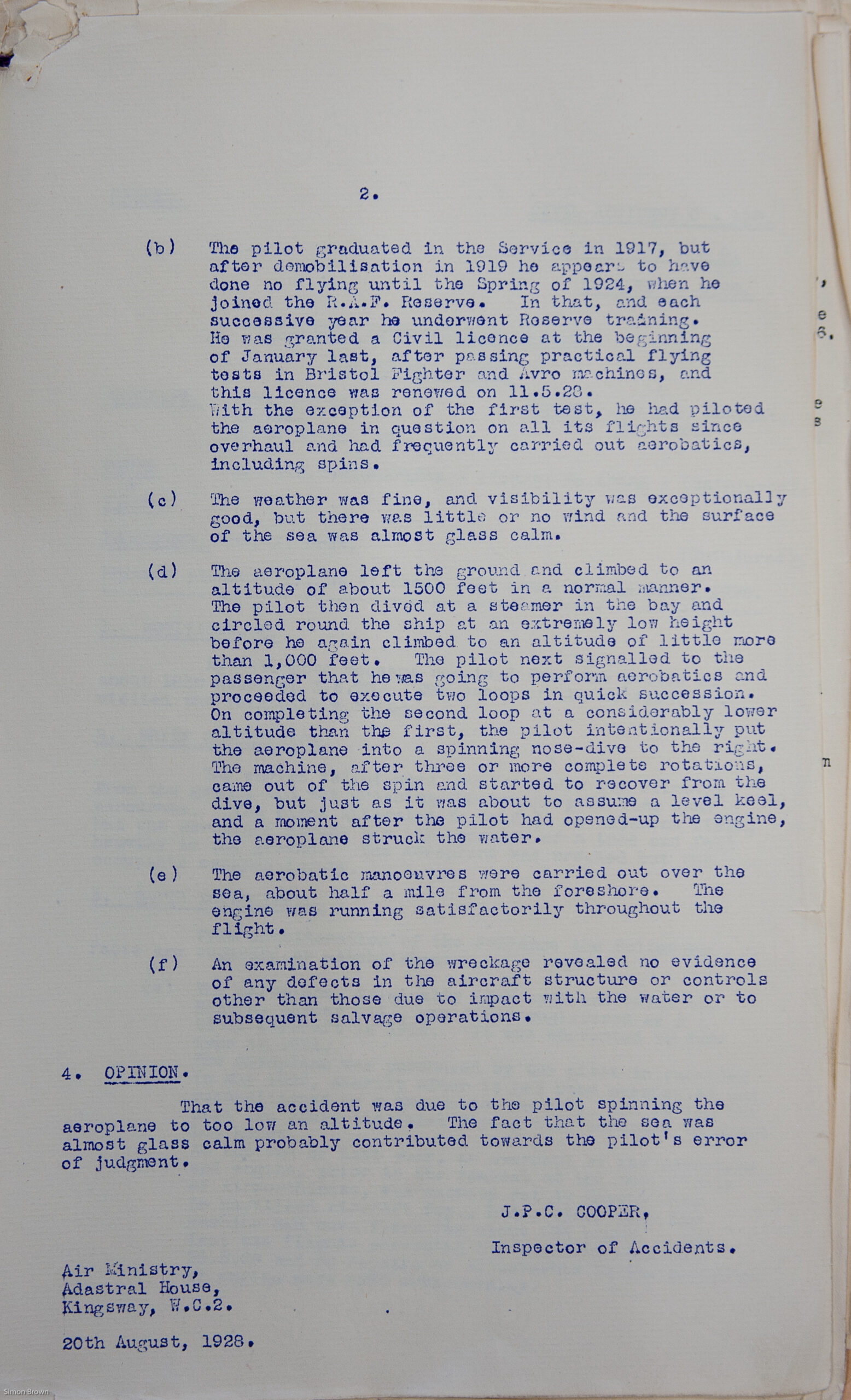 The pilot graduated in the Service in 1917, but after demobilisation in 1919 he appears to have done no flying until the Spring of 1924, when he joined the R.A.F. Reserve. In that, and each successive year he underwent Reserve training. He was granted a Civil licence at the beginning of January last, after passing practical flying tests in Bristol Fighter and Avro machines, and this licence was renewed on 11.5.29. With the exception of the first test, he had piloted the aeroplane in question on all its flights since overhaul and had frequently carried out aerobatics, including spins.

The weather was fine, and visibility was exceptionally good, but there was little or no wind and the surface of the sea was almost glass calm.

The aeroplane left the ground and climbed to an altitude of about 1500 feet in a normal manner. The pilot then dived at a steamer in the bay and circled round the ship at an extremely low height before he again climbed to an altitude of little more than 1,000 feet. The pilot next signalled to the passenger that he was going to perform aerobatics and proceeded to execute two loops in quick succession. On completing the second loop at a considerably lower altitude than the first, the pilot intentionally put the aeroplane into a spinning nose-dive to the right. The machine, after three or more complete rotations, came out of the spin and started to recover from the dive, but just as it was about to assume a level keel, and a moment after the pilot had opened-up the engine, the aeroplane struck the water.

The aerobatic manoeuvres were carried out over the sea, about half a mile from the foreshore. The engine was running satisfactorily throughout the flight.

An examination of the wreckage revealed no evidence of any defects in the aircraft structure or controls other than those due to impact with the water or to subsequent salvage operations.

OPINION. That the accident was due to the pilot spinning the aeroplane to too low an altitude. The fact that the son was almost glass calm probably contributed towards the pilot’s error of judgment.

Reason of Loss: Crashed in to the sea