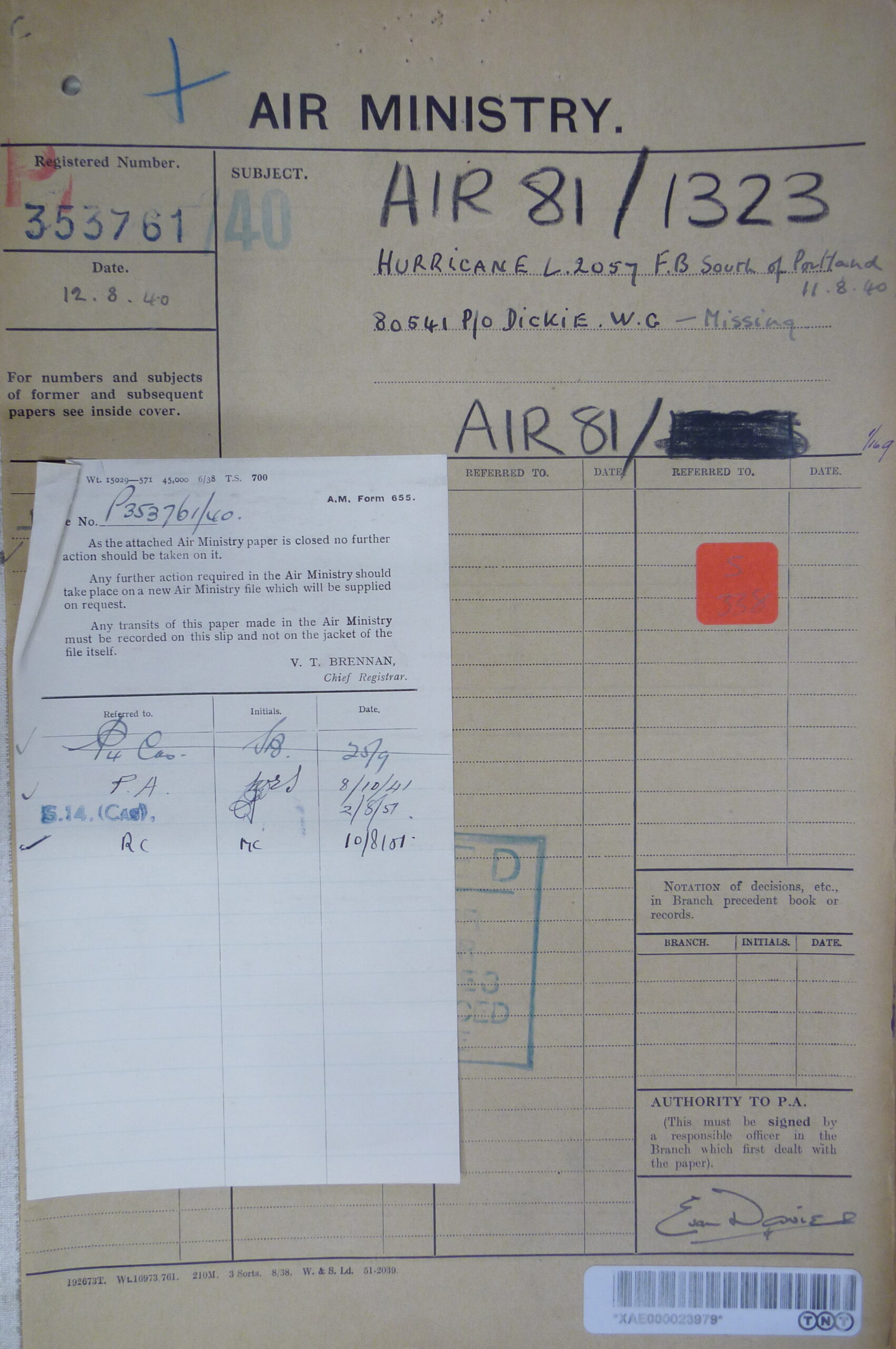 I duly received your letter of 12th inst., and note the Air Council must conclude that my son lost his life and that his death will be presumed for official purposes to have occurred on 11th August, 1940.

I shall be glad to know whether there is any further certificate of presumption issued by the Air Ministry or whether this letter is all the documentary evidence necessary to enable me to deal with my son’s estate and effects.

I appreciate very much the Air Council’s expression of sincere sympathy in our present trouble but if we have to presume the worst we know that he has done his bit for his country. 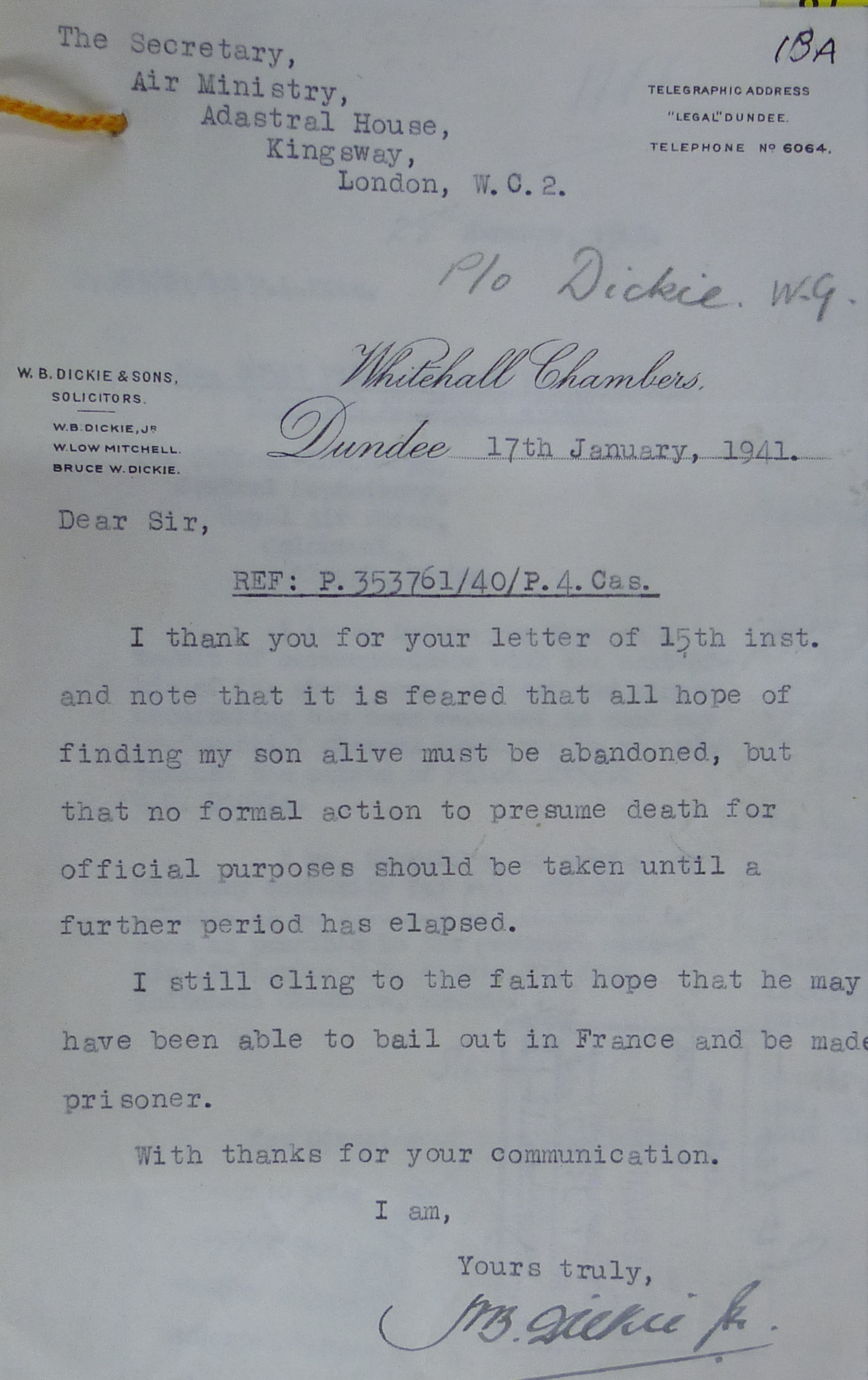 I thank you for your letter of 15th inst. and note that it is feared that all hope of finding my son alive must be abandoned, but that no formal action to presume death for official purposes should be taken until further period has elapsed.

I still cling to the faint hope that he may have been able to bail out in France and be made prisoner. 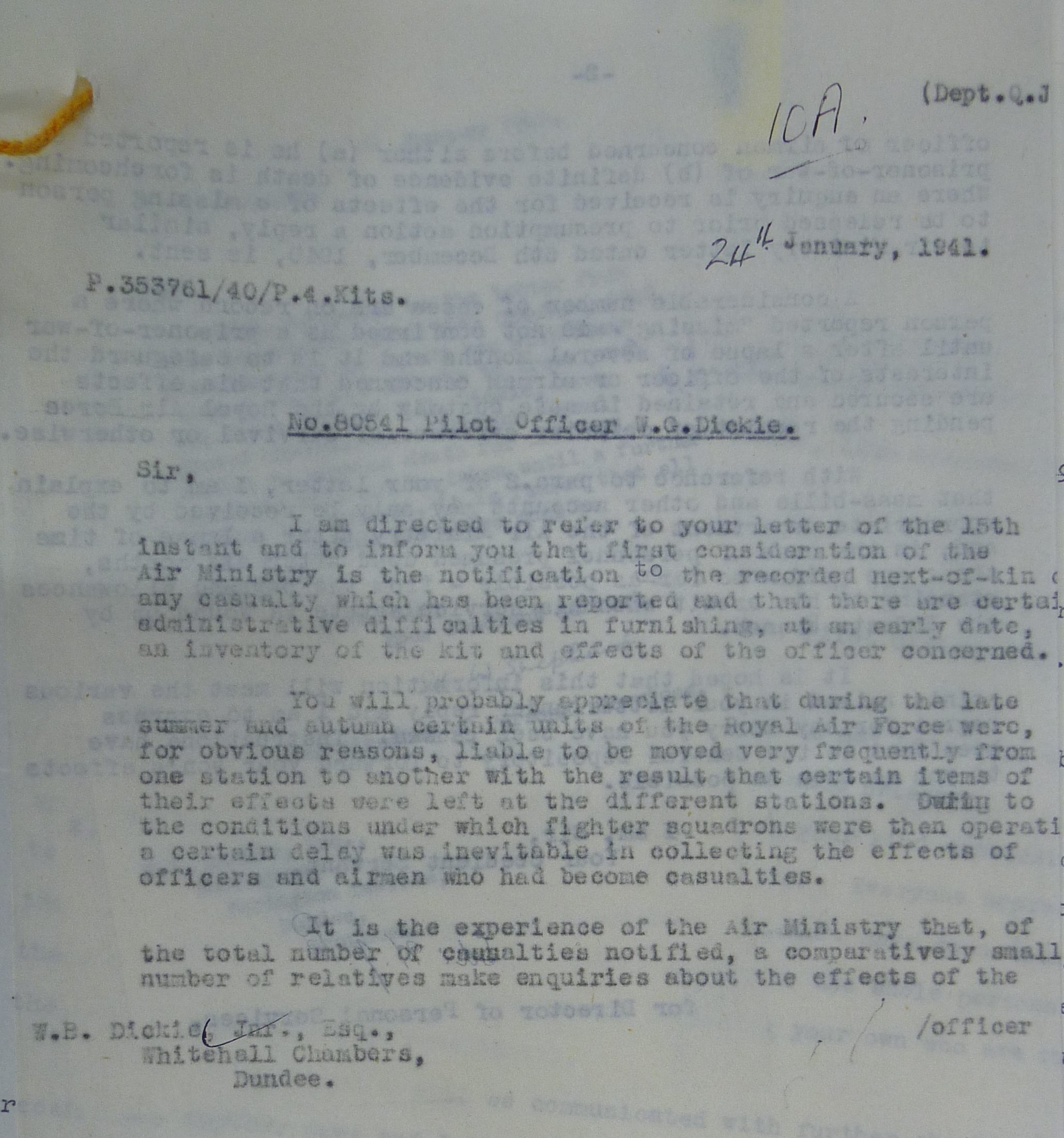 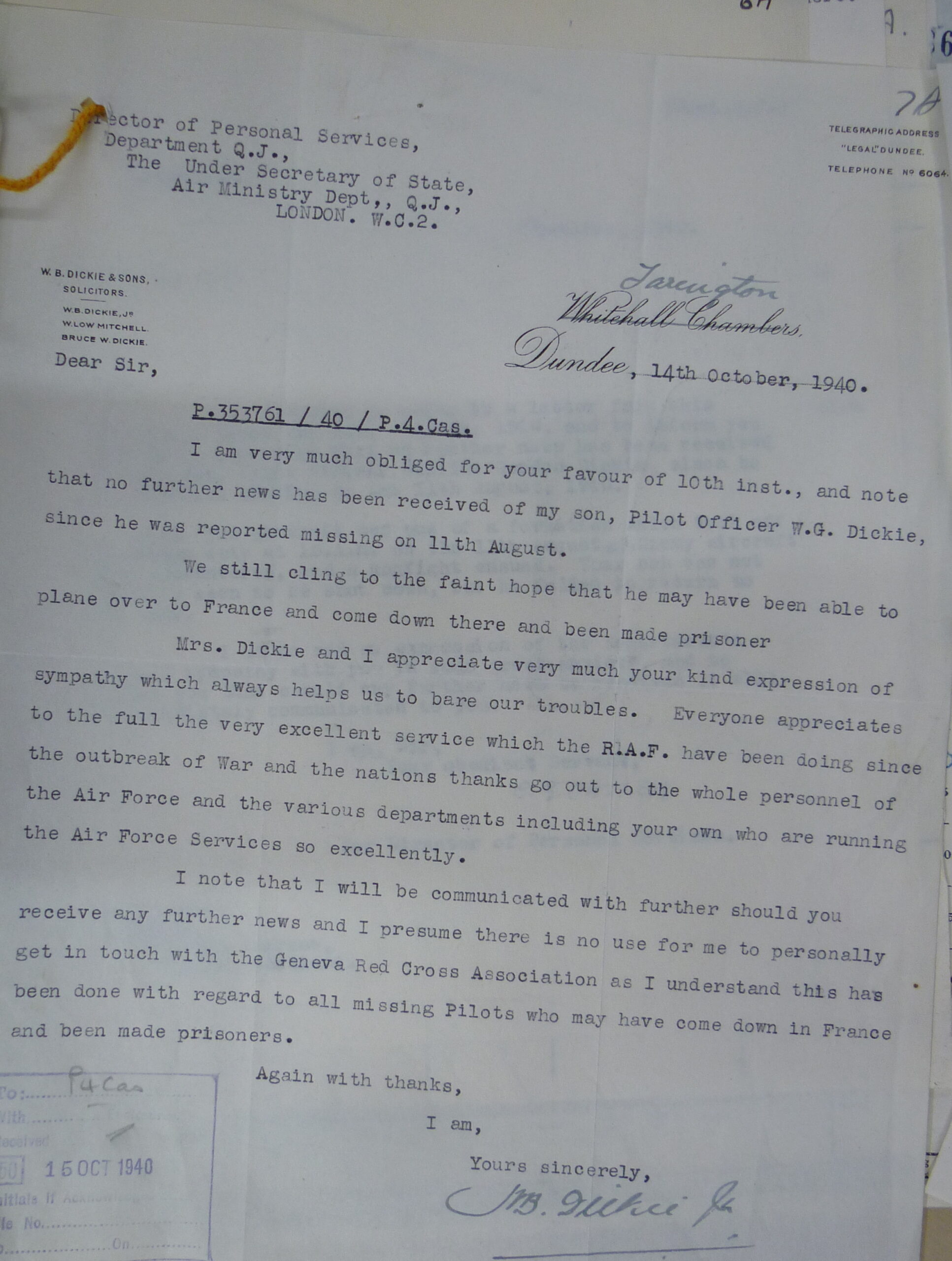 I am very much obliged for your favour of 10th inst., and note that no further news has been received of my son, Pilot Officer W. G. Dickie, since he was reported missing on 11th August.

We still cling to the faint hope that he may have been able to plane over to France and come down there and been made prisoner.

Mrs. Dickie and I appreciate very much your kind expression of sympathy which always helps us to bare our troubles. Everyone appreciates to the full the very excellent service which the R.A.F. have been doing since the outbreak of War and the nations thanks go out to the whole personnel of the Air Force and the various departments including your own who are running the Air Force Services so excellently.

I note that I will be communicated with further should you receive any further news and I presume there is no use for me to personally get in touch with the Geneva Red Cross Association as I understand this has been done with regard to all missing Pilots who may have come down in France and been made prisoners. 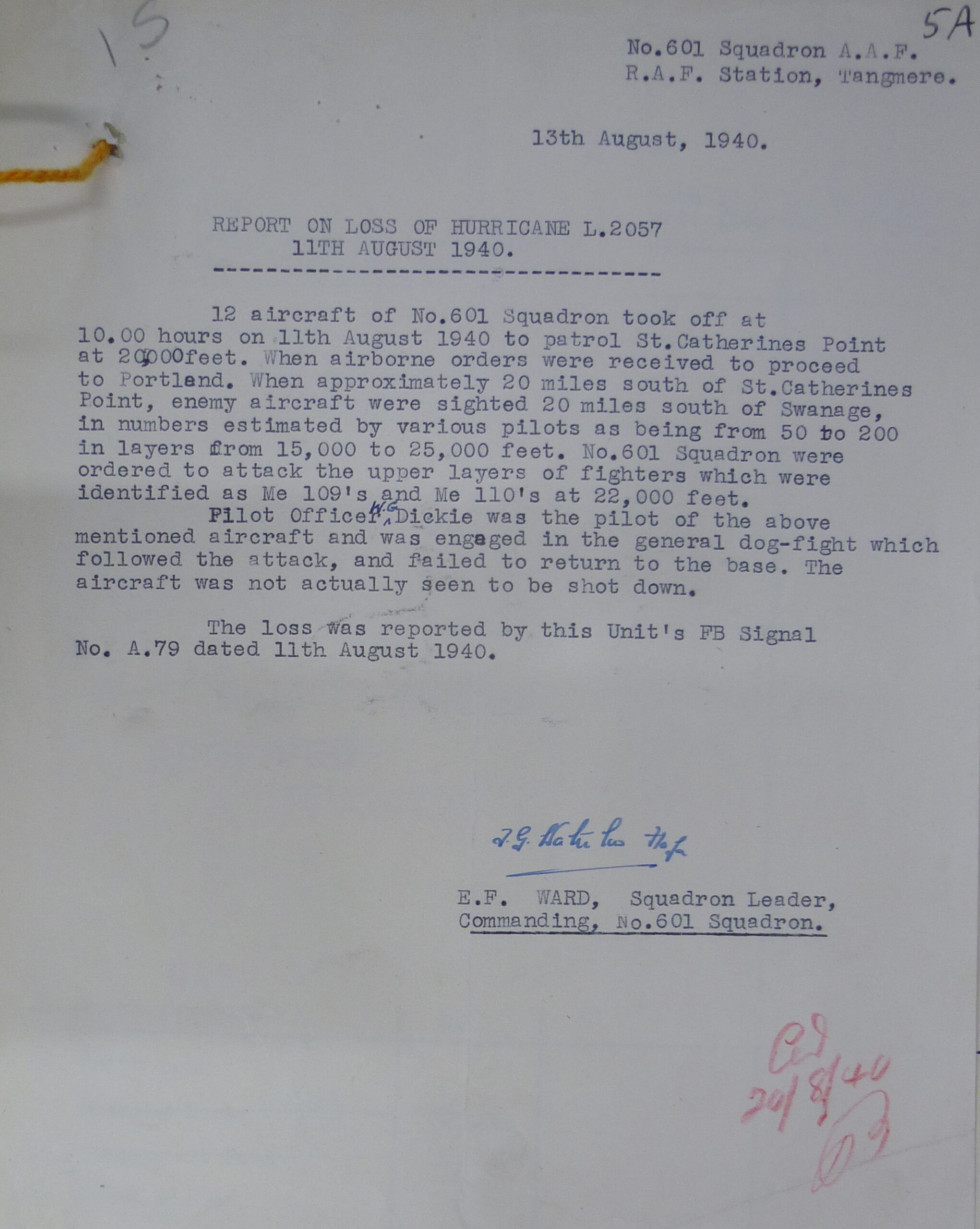 12 aircraft of No.601 Squadron took off at 10.00 hours on 11th August 1940 to patrol St.Catherines Point at 20000 feet. When airborne orders were received to proceed to Portland. When approximately 20 miles south of St.Catherines Point, enemy aircraft were sighted 20 miles south of Swanage, in numbers estimated by various pilots as being from 50 to 200 in layers from 15000 to 25000 feet. No.601 Squadron were ordered to attack the upper layers of fighters which were identified as Me 109’s and Me 110’s at 22000 feet. Pilot Office W. G. Dickie was the pilot of the above mentioned aircraft and was engaged in the general dog-fight which followed the attack, and failed to return to the base. The aircraft was not actually seen to be shot down.