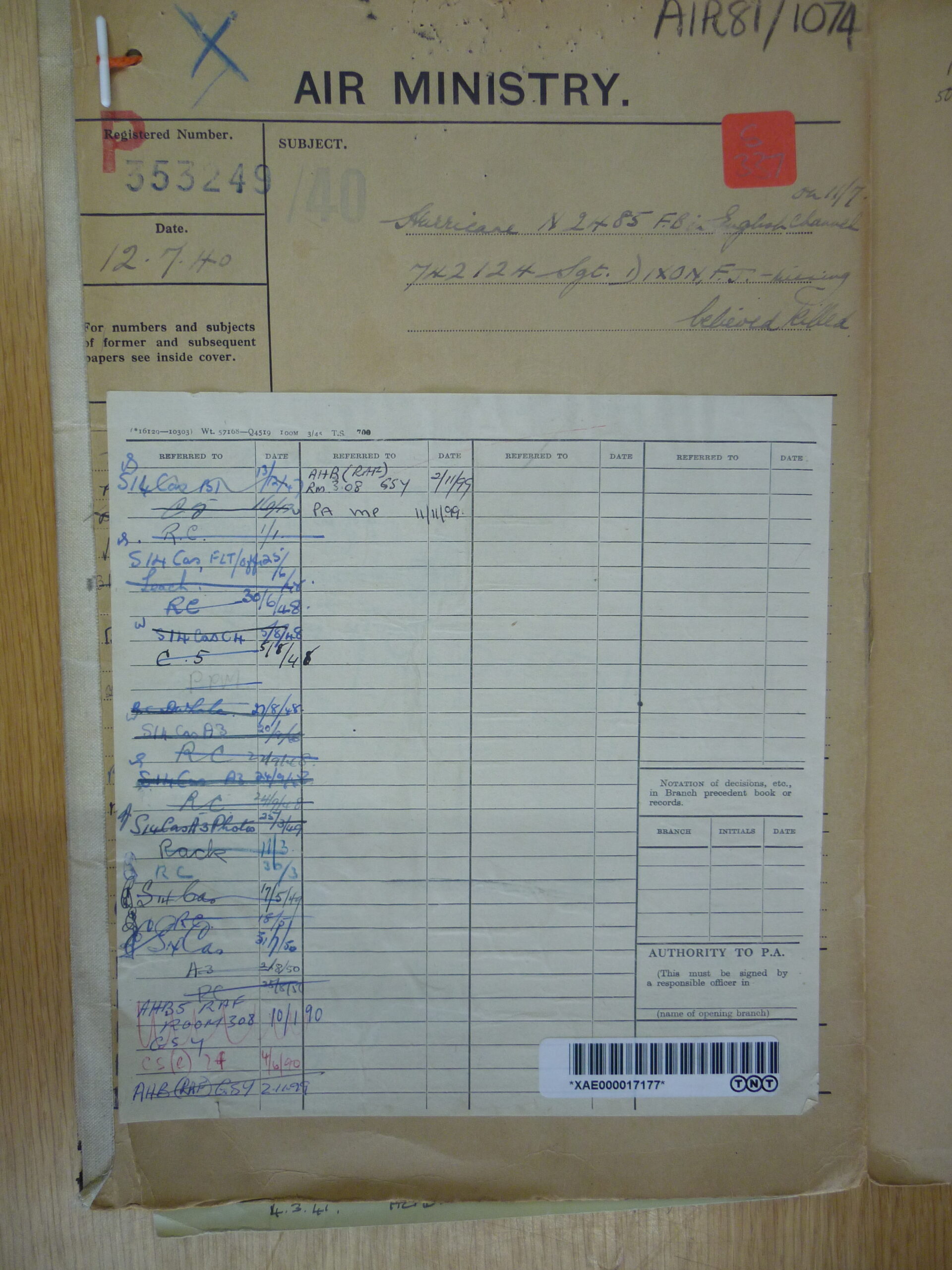 His Mother, Mrs. E.H.Dixon, who is my Mother-in-law, has asked me to make arrangements for her to visit France to see her son’s grave. In the above quoted letter you mentioned that he was buried at Ault, a village 17 miles West of Abbeville.

Before I get in touch with travel Agents about Mrs. Dixon’s proposed trip, I would be grateful if you could let me have further information about the grave.

1. Is it in a Service cemetery or a French civilian one?

2. If the latter, have any arrangements been made for it’s upkeep?

3. To whom should I write in Ault for details? 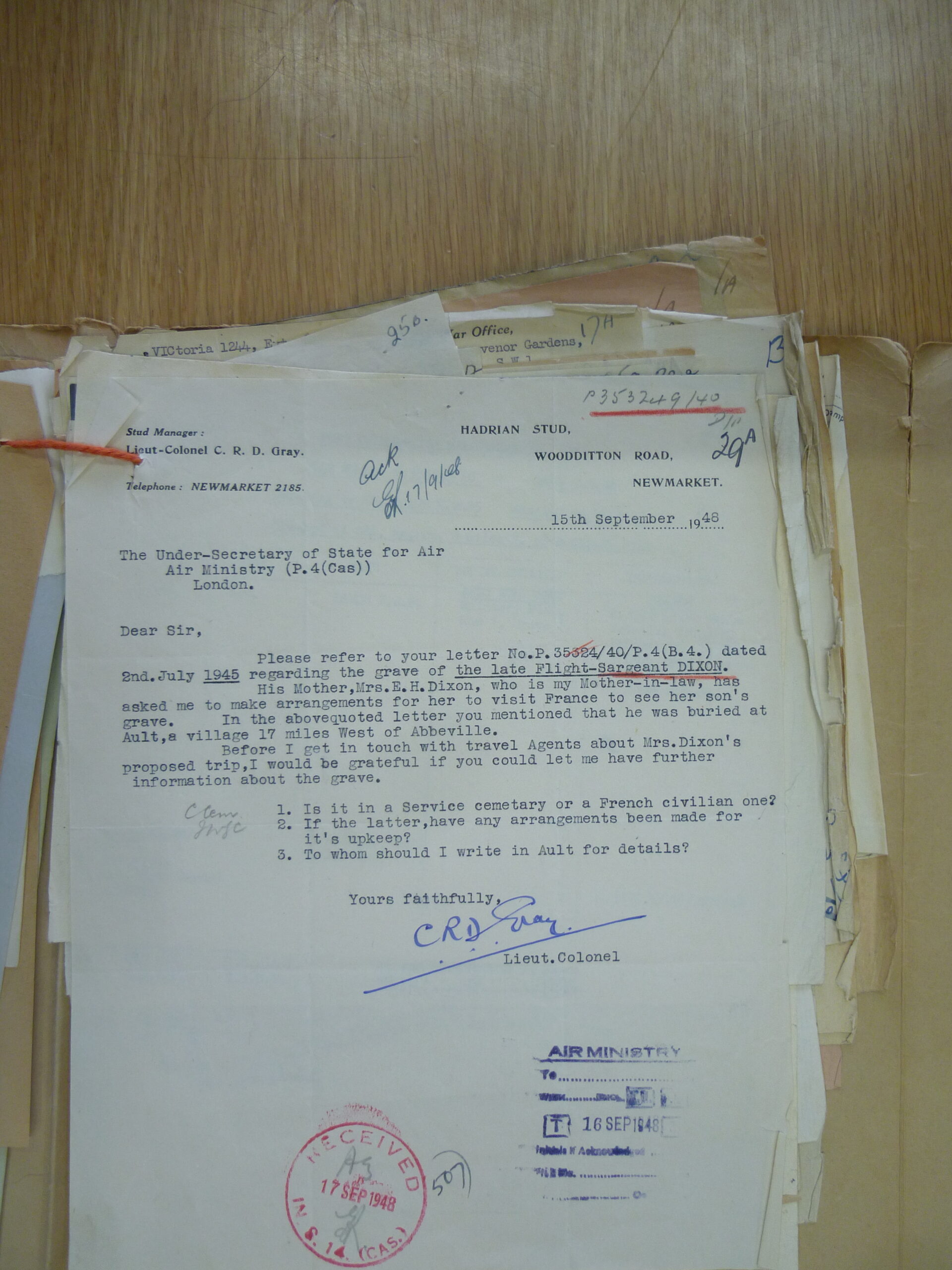 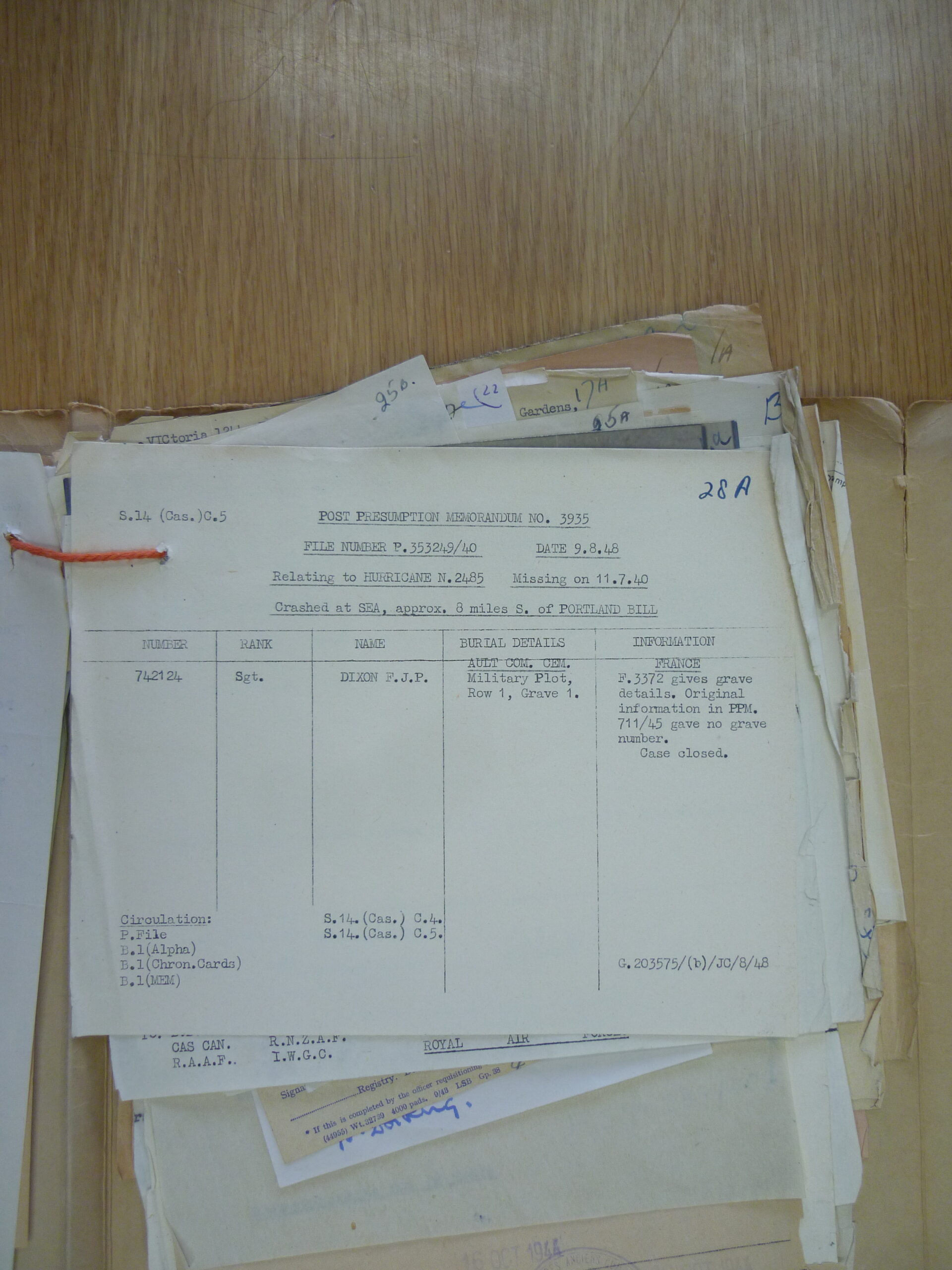 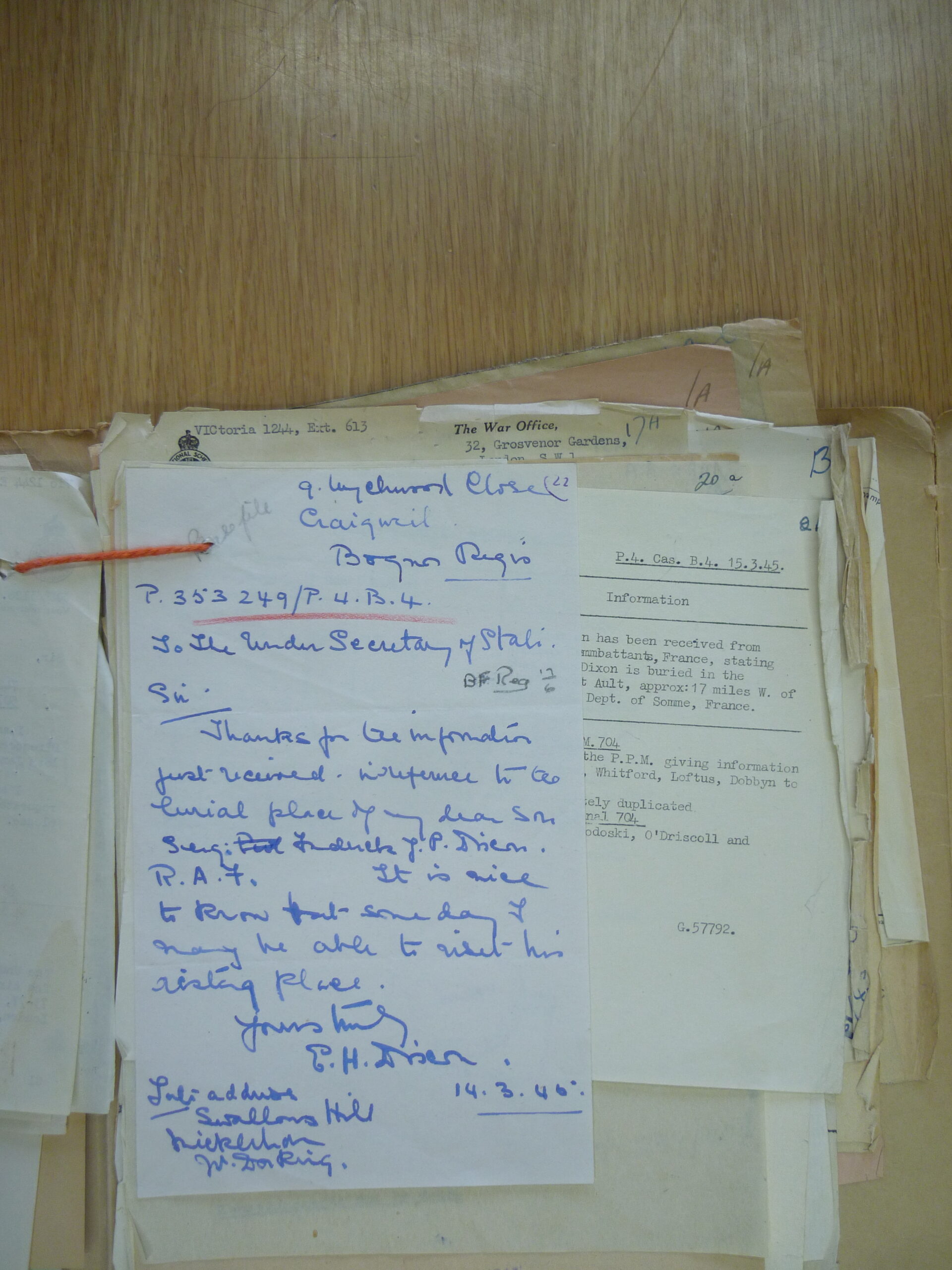 I an commanded by the Air Council to state that in view of the lapse of time and the absence of any further news regarding your son, 742124 Sergeant P.J.P. Dixon, since the date
on which he was reported missing, they must regretfully conclude that he has lost his life, and his death will be presumed to have occurred on the 11th, July, 1940.

The Council desire me to express again their sincere sympathy with you in your bereavement and in the anxiety which you have suffered. 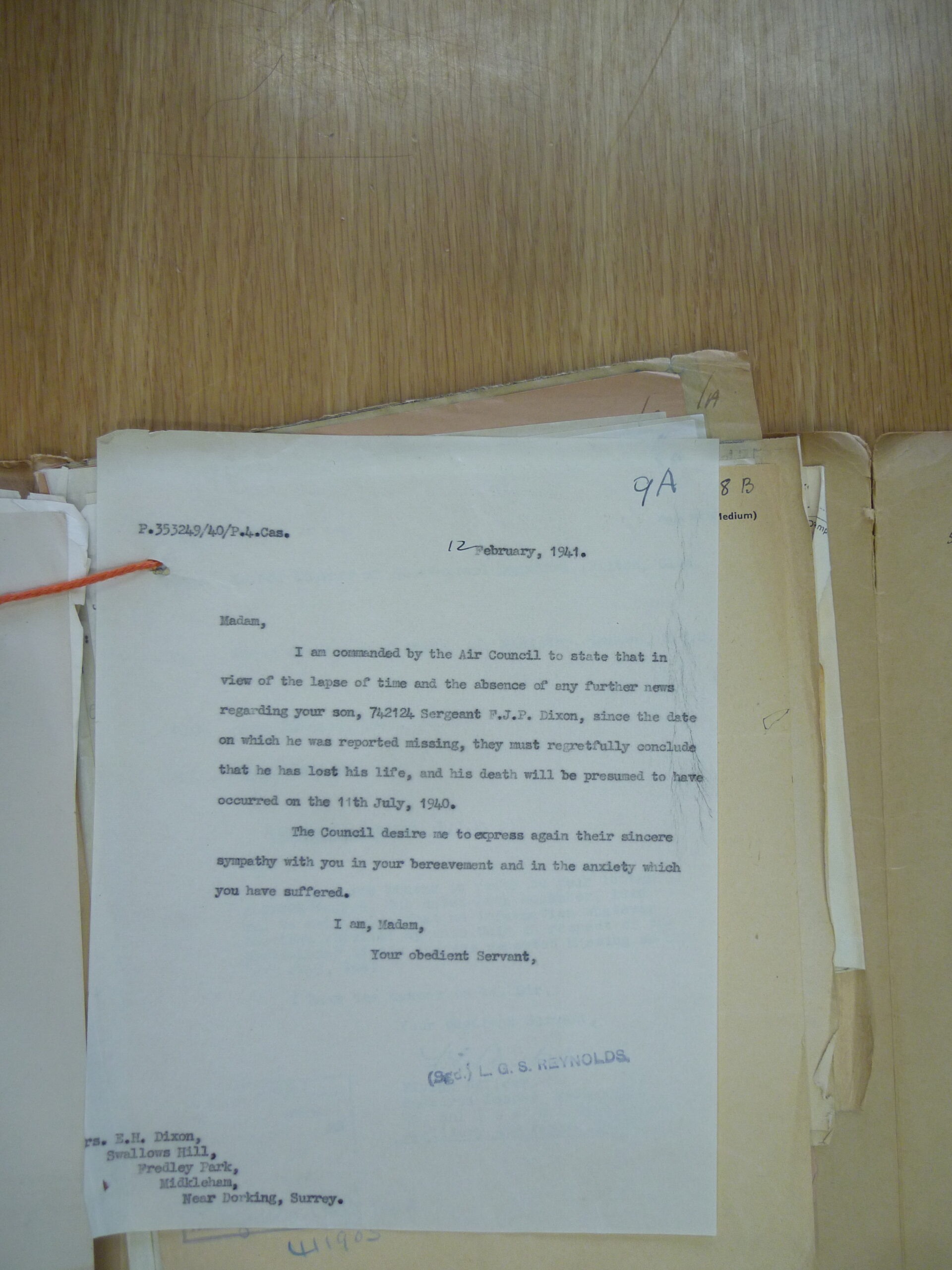 Sergeant Dixon was No 5. of Green Section. At 0730 hours on the 11th July 1940 Green Section took off from Middle-Wallop for Patrol over convoy 5outh of Weymouth Bay.

Green Section had difficulty in locating convoy owing to broken clouds, on coming beneath the clouds it was observed that the convoy which was 6 miles south of Portland Bill was being bombed by a number of Bombers which left the convoy as our fighters approached.

Green Section climbed up above the clouds over the convoy and were intercepted by a number at least nine 109’s a dog fight ensued and almost immediately the leader of Green Section saw a parachute descending below. This is later assumed to be Sergeant Dixon.

The other member of the Section whose statement is slightly incoherent also confirm that he saw one parachute going down and probably two.

It is possible that the Convoy or other craft may have picked up Sergeant Dixon. A Pilot of the Squadron went out to search an area of 10 miles to the South of Portland Bill. The search lasted for 1 hour 50 minutes. A Naval vessel was also searching in the same area. No reports have been received but it is presumed that Sergeant Dixon is missing. 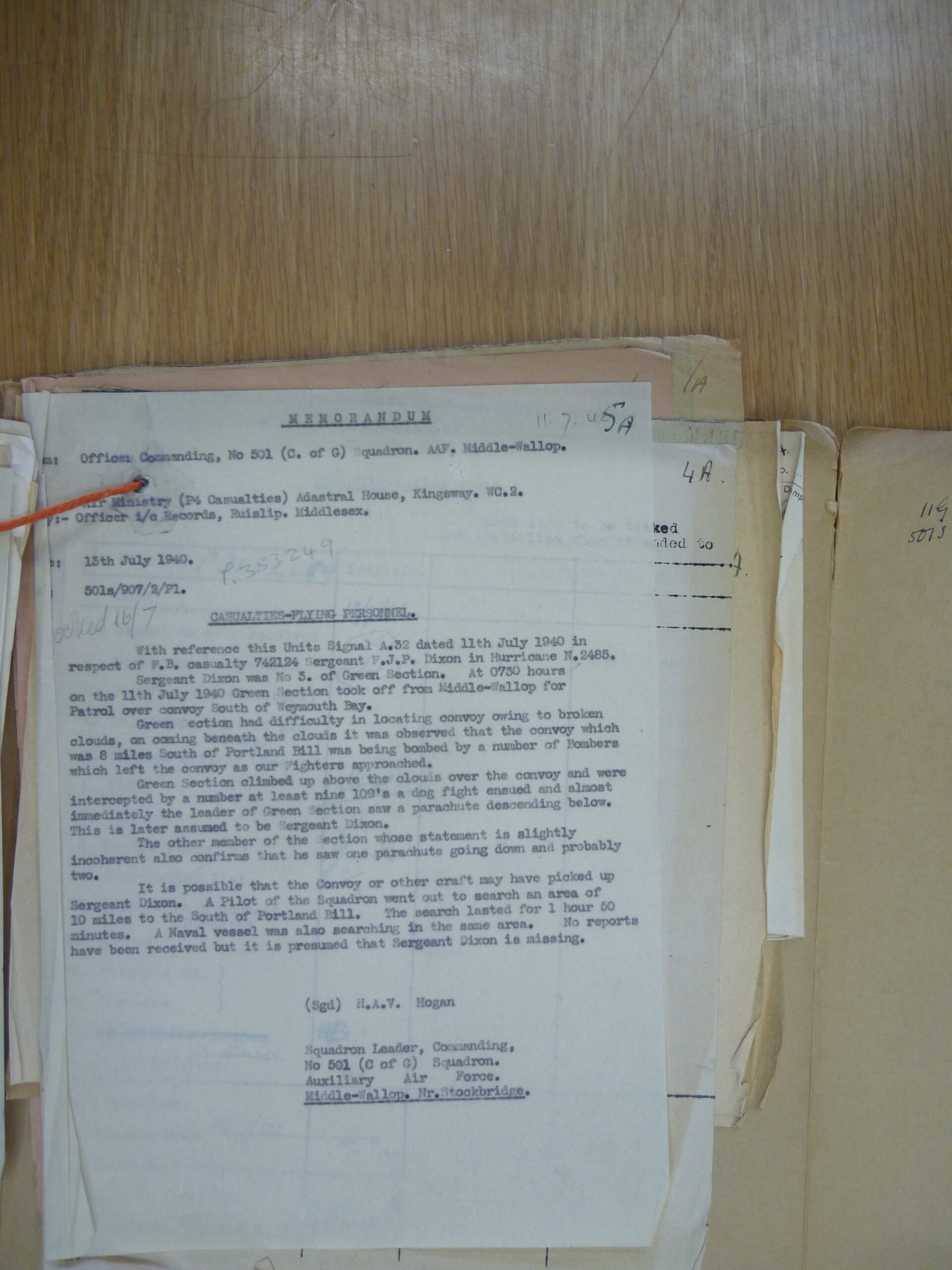