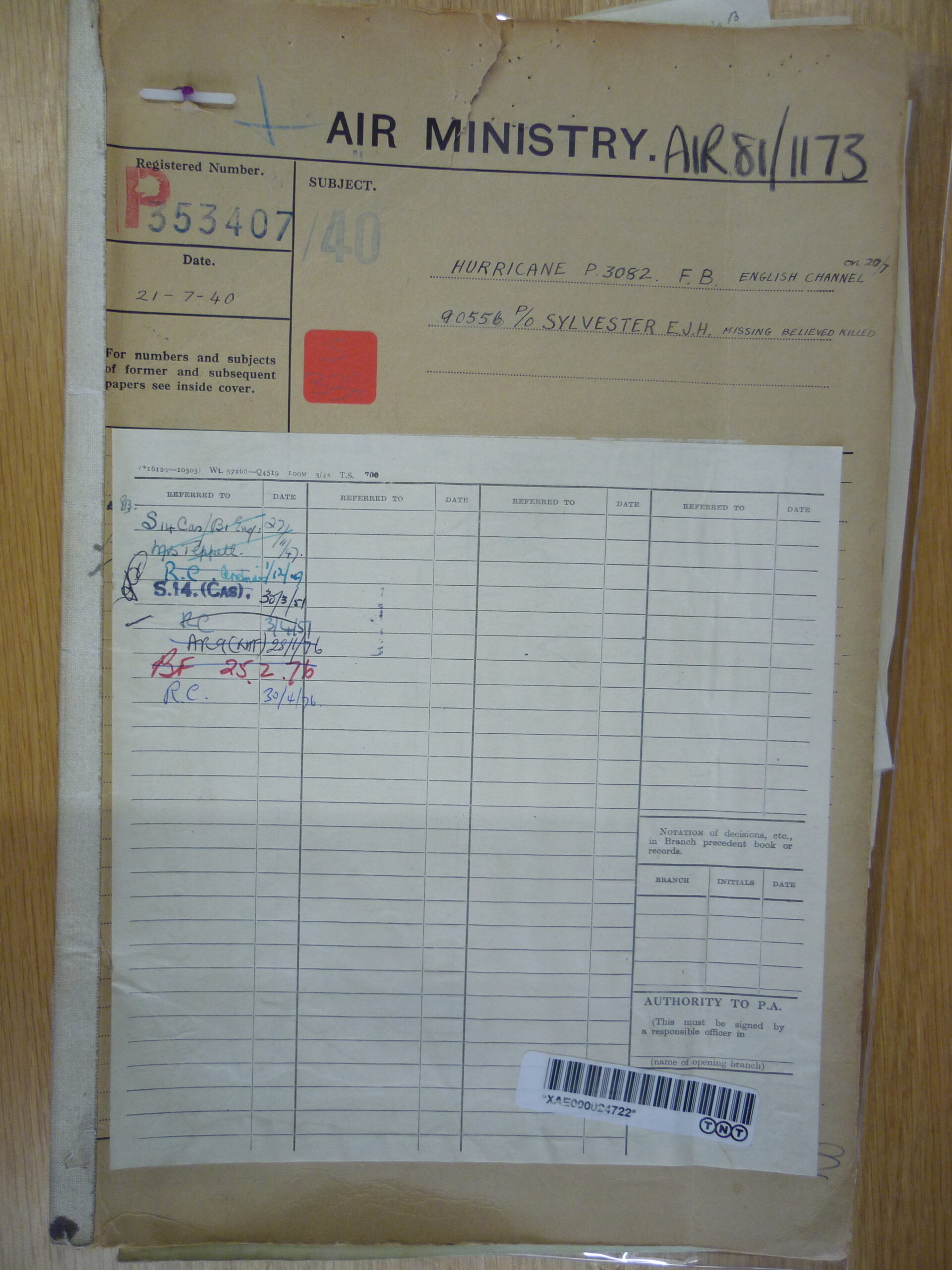 Details of the loss of Hawker Hurricane P3082.

Referring to yours of the 1st instant, as requested, I confirm that I have received no further evidence or news regarding my late son. Pilot Officer E.J.H. Sylvester, who was reported missing in July last.

I shall be glad if official notification can be given to the Estate Duty Office that it is a suitable case for exemption from duty. My late son died intestate, and, for several reasons, it was desirable that Administration should be taken out to his estate as soon as possible; and this was done by way of Grant of Administration, out of the Bristol Registry; to myself, (Frederick Arthur Percy Sylvester, of Trowbridge, Solicitor), on the 1st Novemter last. 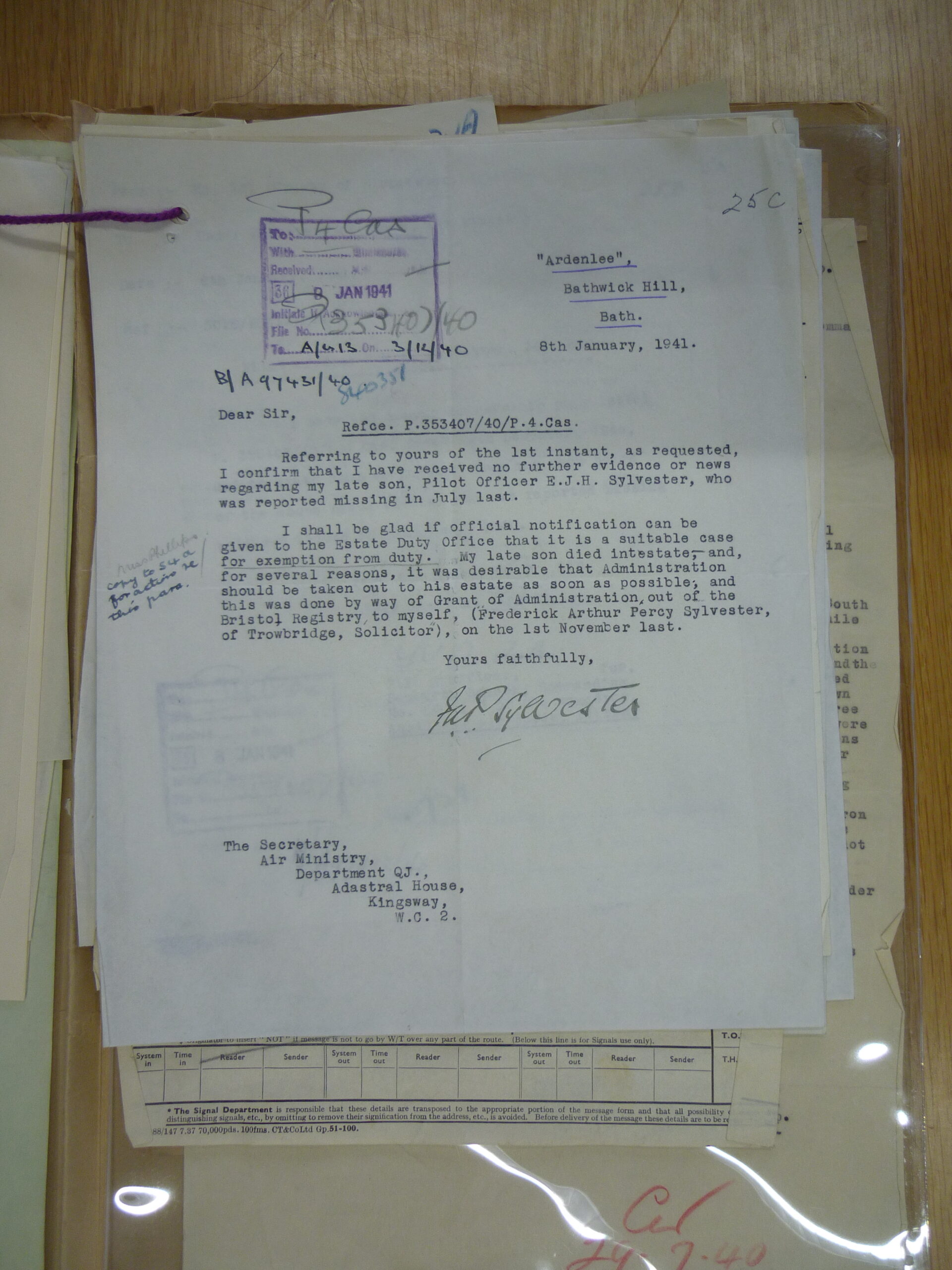 I am directed to acknowledge your letter of the 16th August, 1940, and to inform you that it is regretted that no further news has been received of your son, Pilot Officer Edmund John Hilary Sylvester, since he was reported missing and believed to have lost his life on the 20th July, 1940.

Your son’s aircraft took off with his Squadron at approximately 4 p.m. on the 20th July, to patrol a convoy in the Channel. Observing a destroyer being bombed, the Squadron dived from 8,000 feet to 3,000 feet to attack the enemy, whose numbers were unknown owing to poor visibility. The enemy made off and were chased by all sections, some pilots making contact with the enemy. Pilot Officer Sylvester was leader of the rear section and dived with the Squadron. The remainder of his section did not see him again, and it is presumed that his aircraft was singled out and shot down by the enemy.

In the absence of definite news of your son it will be necessary, after the lapse of approximately six months from the date of the occurrence, to presume his death for official purposes. When such action is contemplated a further letter will be addressed to you.

Your change of address has been noted. It is regretted that Mrs. Sylvester was erroneously addressed as the wife of Pilot Officer Sylvester, but the Squadron informed us that his next of kin was his wife at that address.

I am to add an expression of the Department’s sincere sympathy with you in your great anxiety. 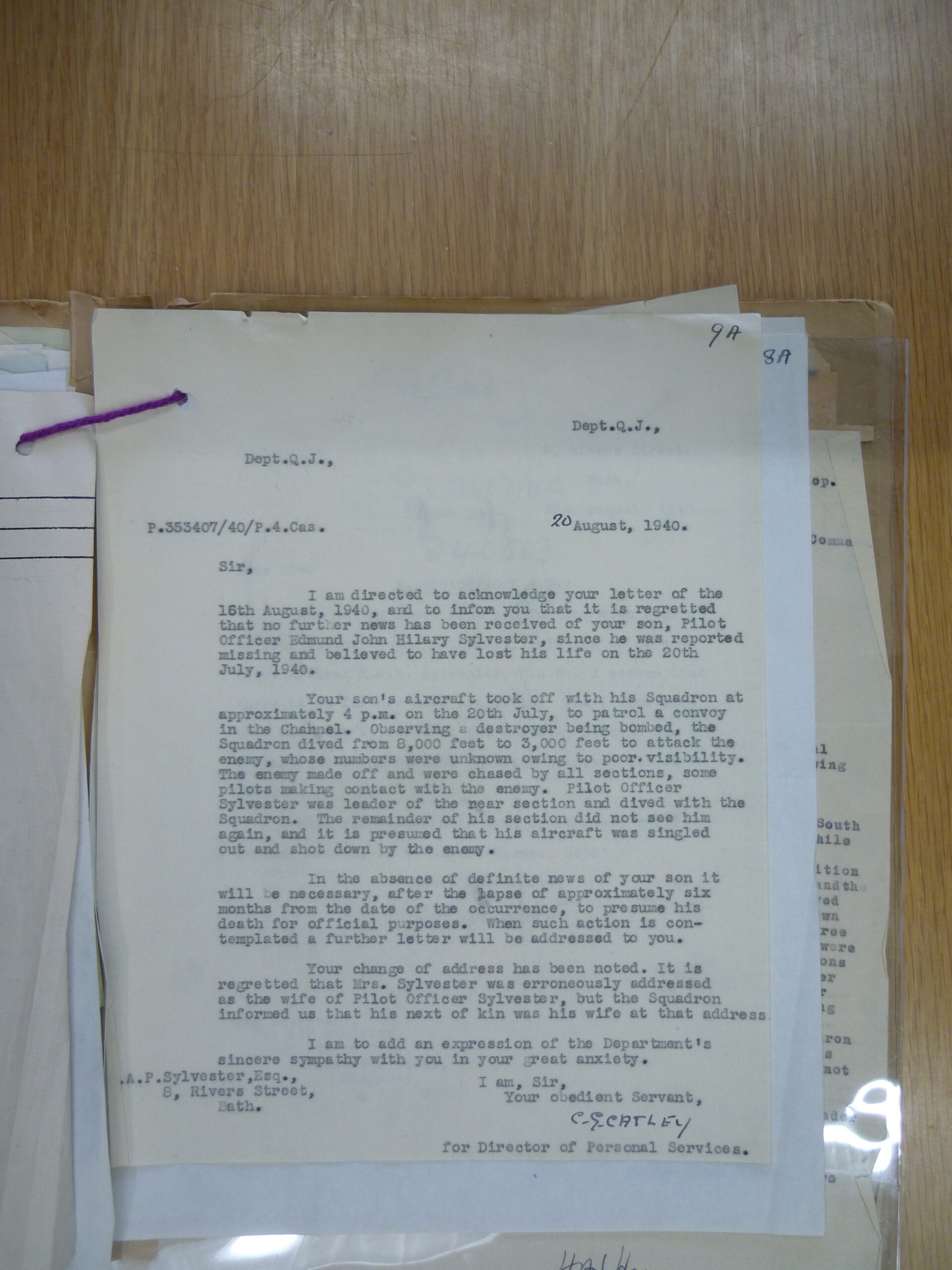 I have the honour to refer to this unit’s signal A. 57 dated 22nd July, 1940, and to forward the following report on the above F.B. Casualty.

At about 15:30 hours on Saturday 20th July, 1940 501 Squadron were ordered to patrol a convoy 20 miles South of Swanage. At 1555 hours the Squadron took off and while proceeding to the convoy were subsequently ordered to patrol 20 miles South of Warmwell. At this second position the Squadron Leader observed a destroyer being bombed and the Squadron which was at 8,000 feet and in line astern dived 3,000 feet to attack the enemy whose numbers were unknown owing to the haze and poor visibility as only two or three enemy aircraft were seen, but it was obvious that more were about. The enemy made off and were chased by all sections some pilots making contact with the enemy. Pilot Officer Sylvester was leader of Green section which was the rear section. Green 2 and Green 3 were carrying out a weaving search at the commencement of the attack. Pilot Officer Sylvester – leader of Green Section dived with the Squadron whilst Green 2 and Green 3 remained above the Squadron as they were late in seeing their leader dive down and did not follow suit.

Green 2 and Green 3 did not see their section leader again and it is presumed that Pilot Officer Sylvester was singled out and shot down by enemy action. 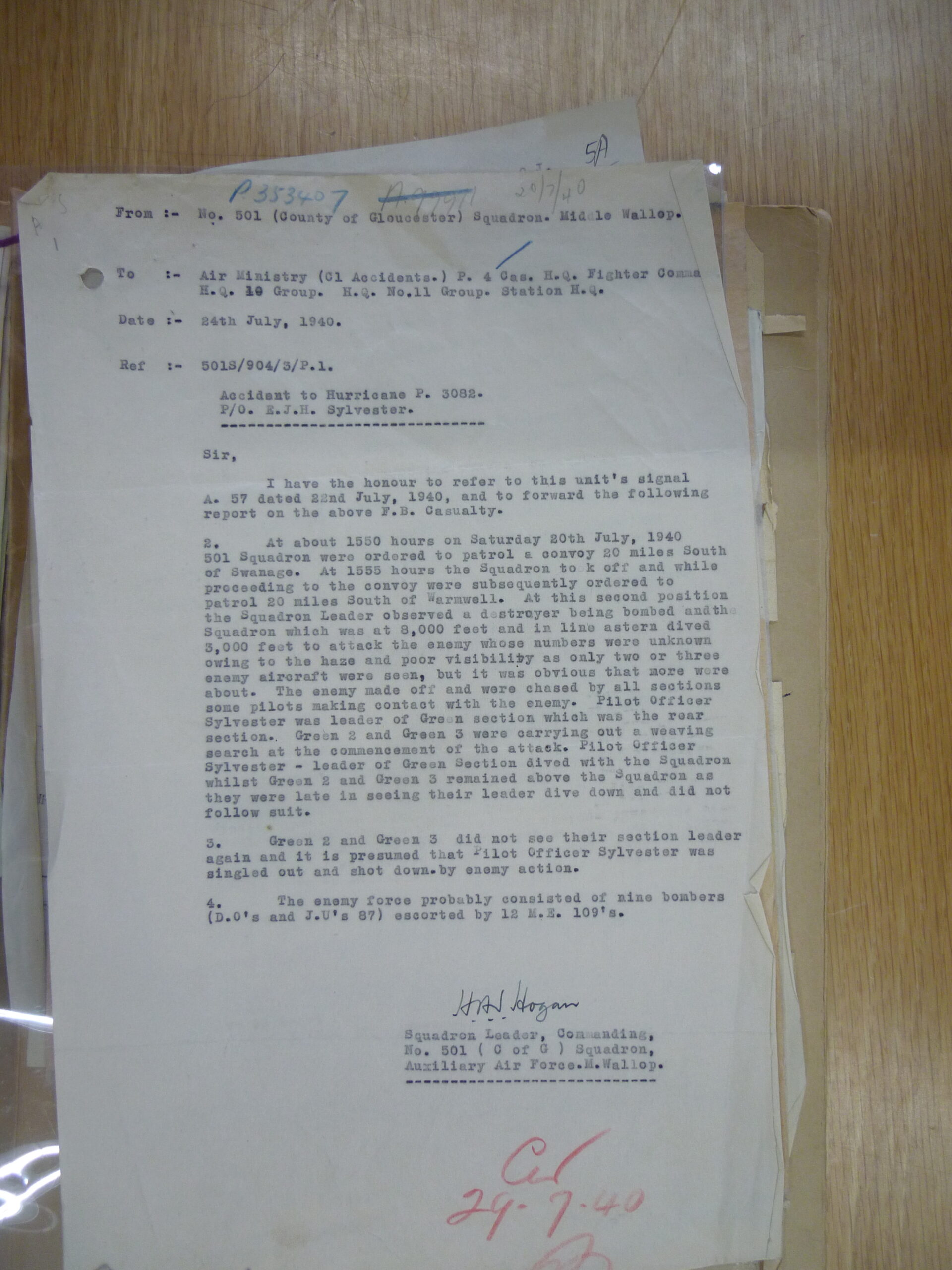