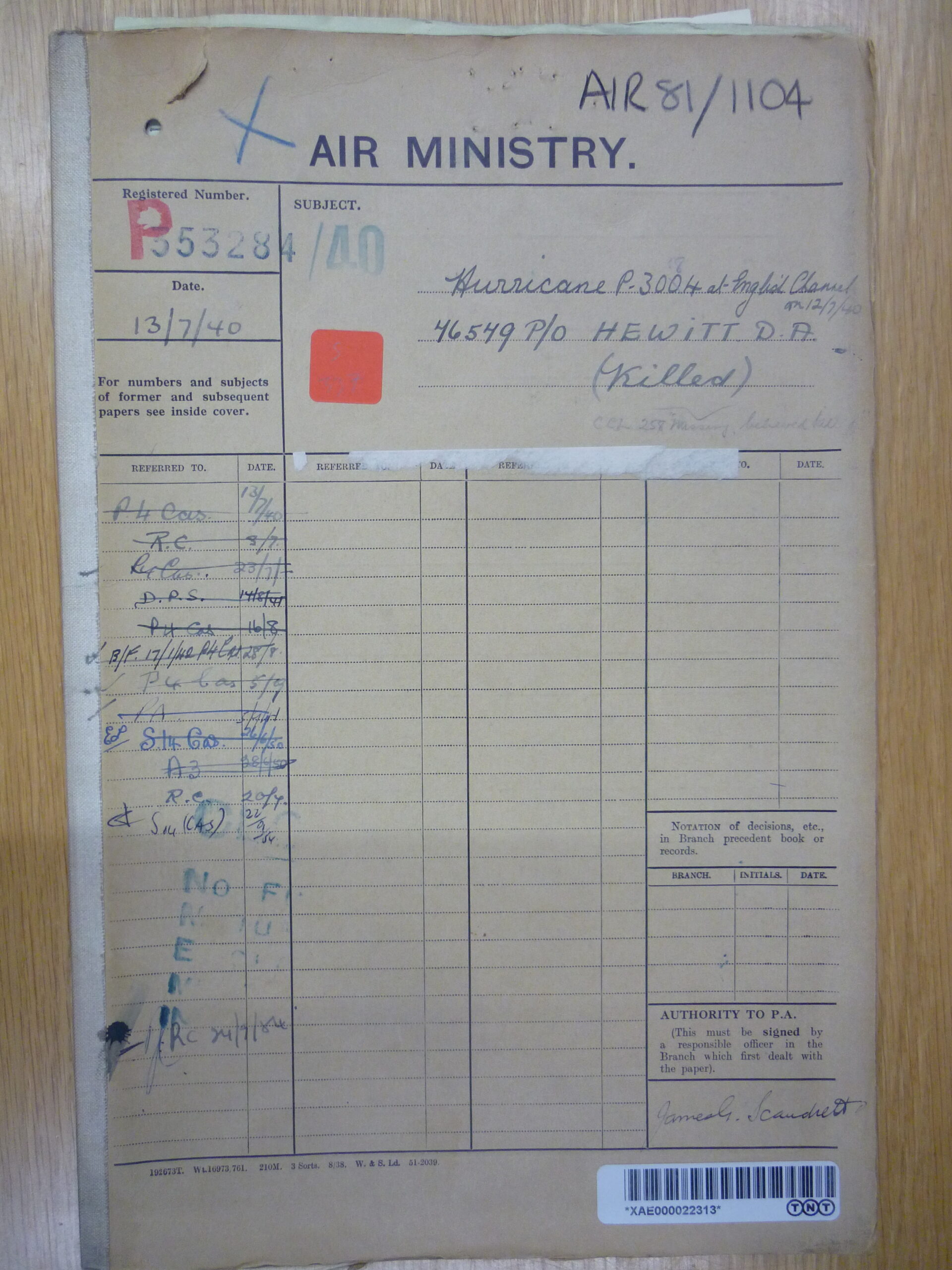 It appears that P/O Hewitt, in company with others, was ordered to intercept an enemy raider. In the course of this operation the Hurricane hit the water at great speed and broke up. The body of the pilot was later seen floating on the surface of the water, but was not recovered. (enclos. 13A).

In view of the fact that the original signal reported P/O Hewitt as “killed”, presumption action was not taken. It is now apparent, however, that as the body of this officer was not recovered, his death must be officially presumed.

It is submitted, therefore, that in view of the evidence shown 13A and of lapse of time, the death of P/O Hewitt be presumed, for official purposes, to have occurred on 12th July, 1940. 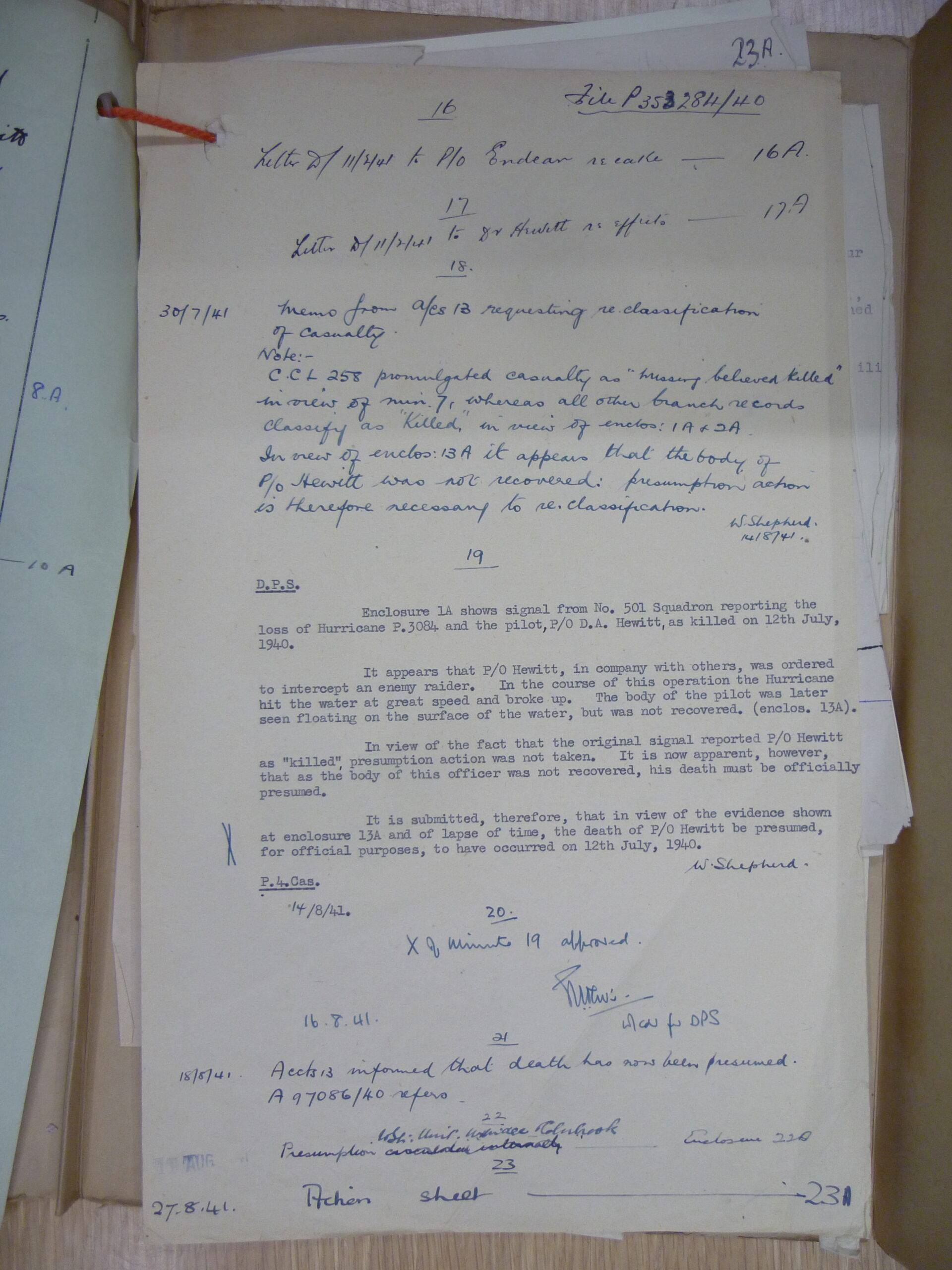 I am directed to refer to your letter dated 2nd January, 1941, and to inform you that as the metal box containing the cake was so well packed, and appeared to be airtight, it has been forwarded to Pilot Officer Endean as requested.

With reference to your letter dated 2nd October, 1940, received at the Central Depository, Colnbrook and briefly acknowledged in Air Ministry letter dated 28th November, 1940, I am to inform you that letters were addressed to “The Occupier”, Underwood, Catlands Avenue, Weybridge, Surrey, by the Officer Commanding, Central Depository on 23rd October and again 5th December last. As no replies were received a registered letter vas sent and this was delivered, and signed for by “H. Creasey”, but no reply has been received by Colnbr00k.

A further letter is being sent by registered post asking for full particulars of any effects left there by your son and on receipt of a reply a further letter will be addressed to you. 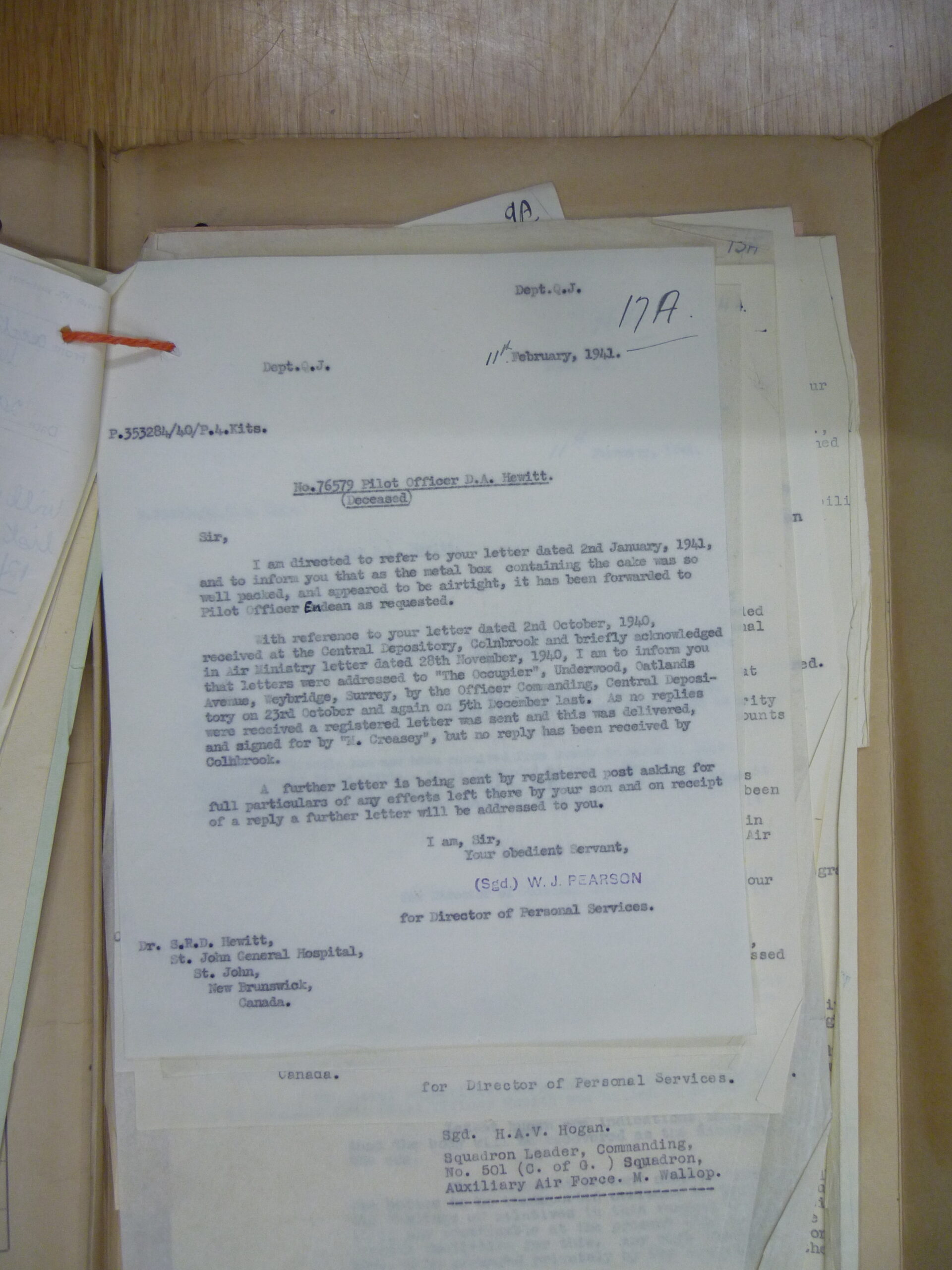 I am to inform you that a tin, containing a cake, was received in this section in November last, and was addressed to the above named deceased officer.

As we were corresponding with the next of kin – Dr. S.R.D. Hewitt – about his son’s kit and effects his instructions were sought as to the disposal of the cake.

A reply has now been received from Canada in which he asks that – provided it is edible – it be forwarded to you. The cake is securely packed in a tin or metal box and is being forwarded to you under separate cover without having been opened or examined. 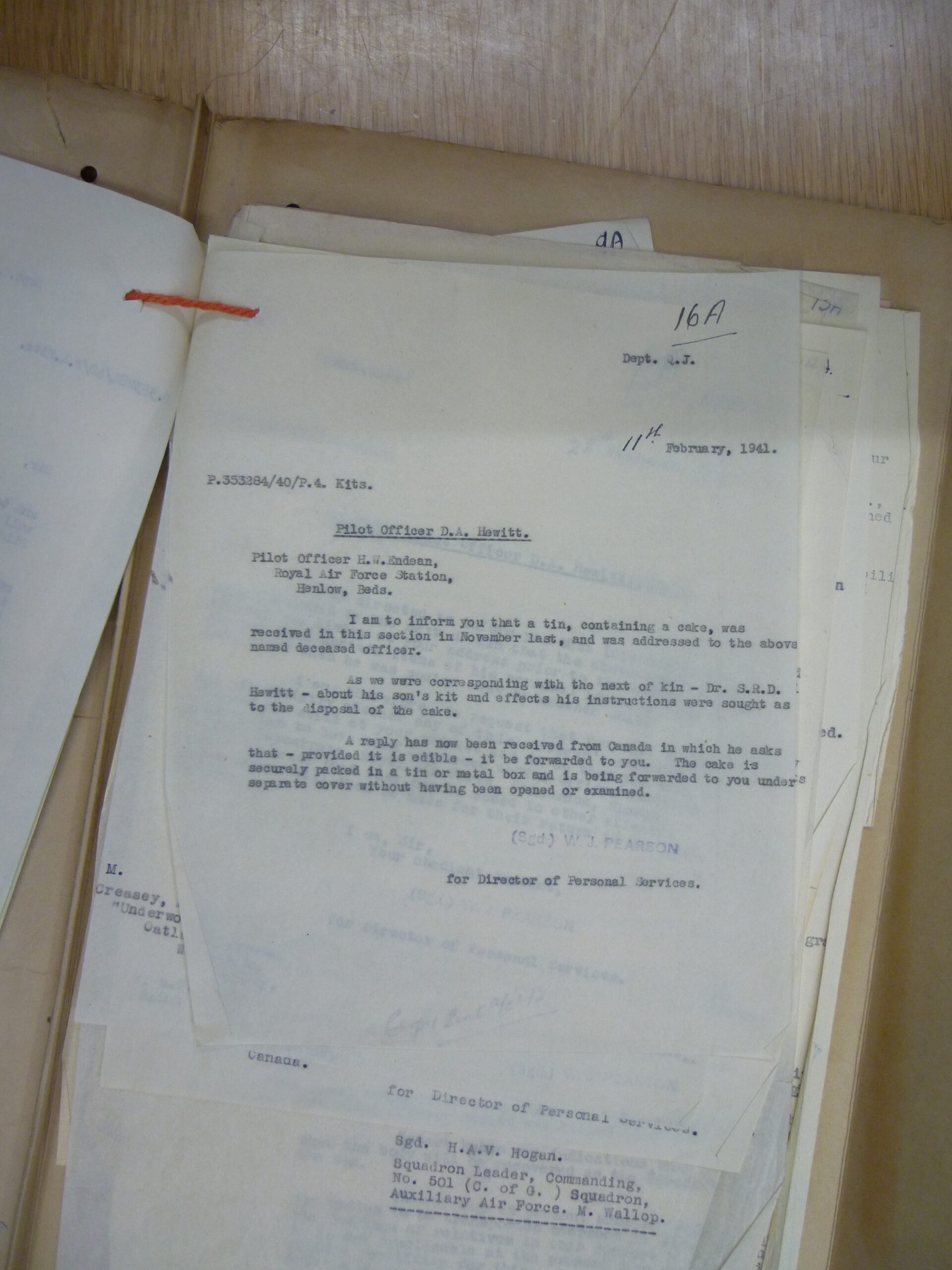 I am directed to inform you that information has been furnished by the next of kin that the above-named officer was living at your address prior to the outbreak of war and that certain items of his personal property were left there when he was posted away to another unit.

I am, therefore, to request that you will inform the Air Ministry whether any of this officer’s personal effects are still at your address. if so that you will be good enough to have them forwarded to “The Officer in-Charge, Central Depository, Royal Air Force, Colnbrook, Slough, Bucks” in order that they may be added to other effects: arrangements will then be made for their return to the next-of-kin. 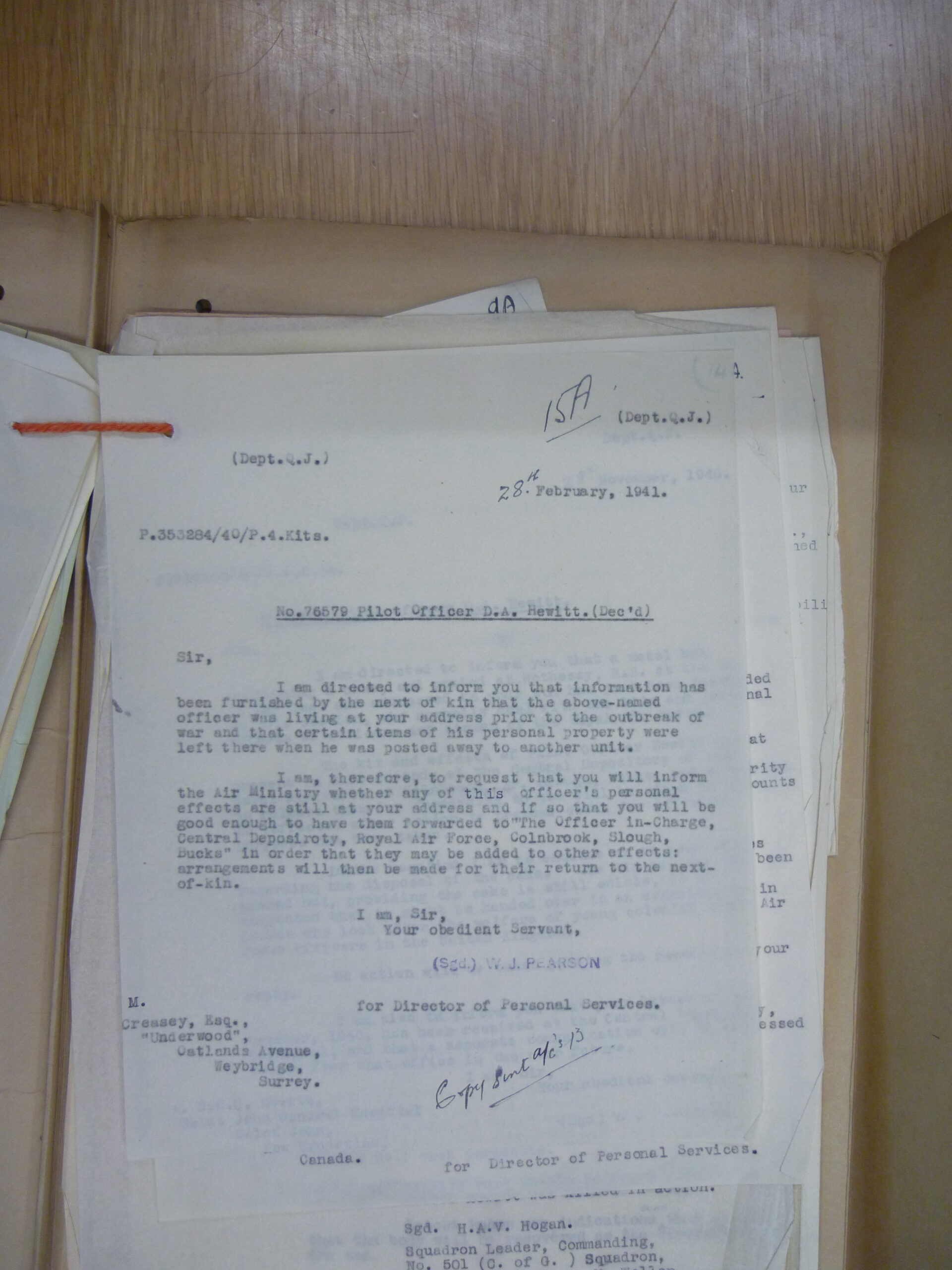 I am directed to inform you that a metal box containing a cake, and posted at Rothesay, N.B. at the and of May last and addressed to your son has just been forwarded to this section, who normally deal with the kits and personal effects of officers and airmen of the Royal Air Force.

The kit and effects of Pilot Officer Hewitt are at present in safe custody at the Central Depository of the Royal Air Force at Colnbrook, Nr. Slough, Bucks, and authority to release them for forwarding to you will be given by Accounts 13 (Effects) after action to presume death for official purposes has been taken.

In the meantime I am to enquire as to your wishes rergarding the disposal of the cake. The tin has not yet been opened but, providing the cake is still edible, it is suggested that it might be handed over to an organisation in London who look after the welfare of young colonial Royal Air Force officers in the United Kingdom.

No action will be taken pending the receipt of your reply.

I am also to inform you that your letter of 2nd October, 1940, has been received at the Central Depository, Colnbrook, and that a separate communication will be addressed to you from that office in the near future. 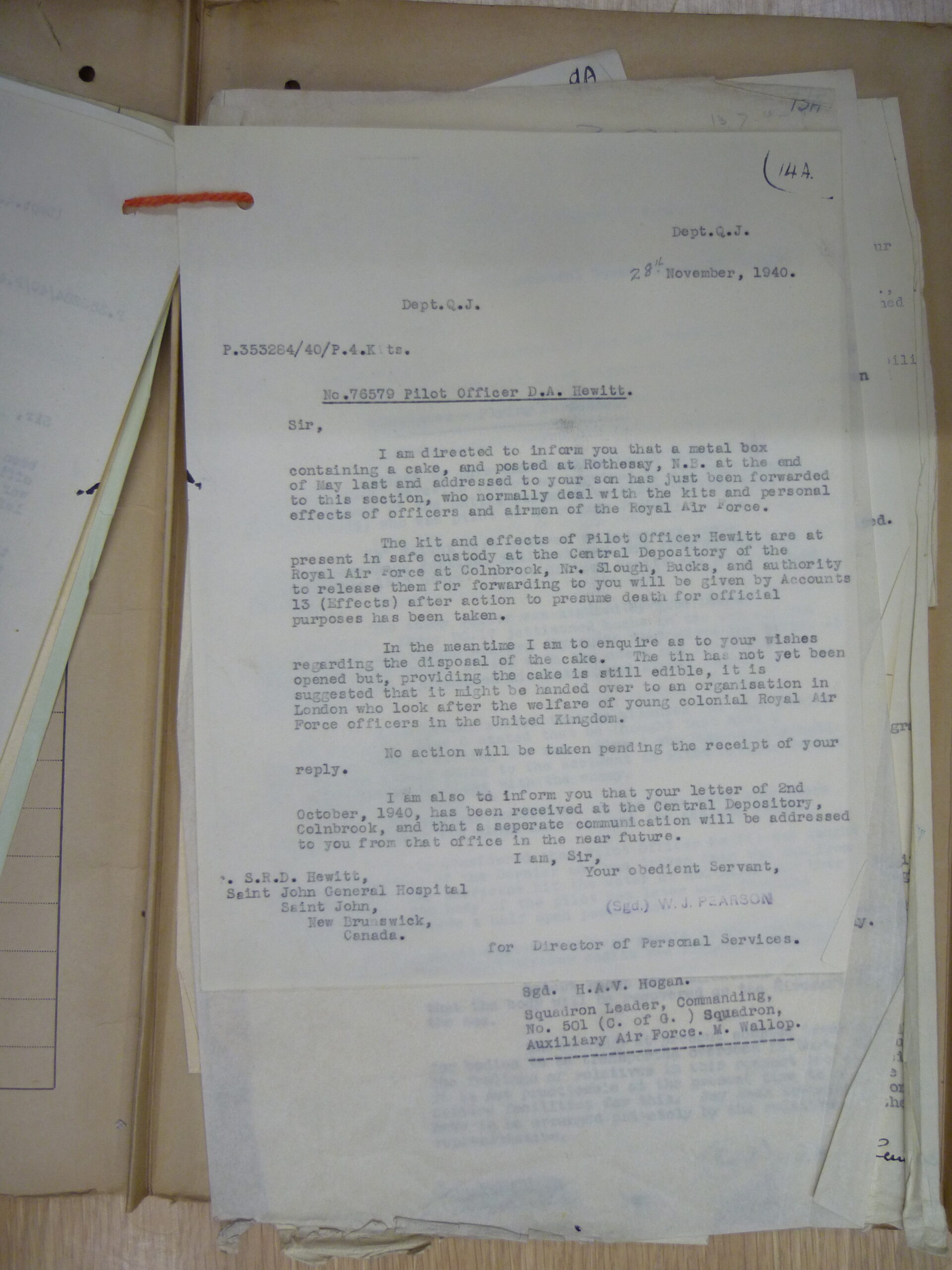 “B” Flight were ordered to intercept enemy raider approaching Portland Bill and took off from Warmwell at approximately 1515 hours. Pilot Officer Hewitt was No.2 of Blue Section.

The enemy raider was sighted by Blue Leader at 5000 feet. Enemy DO.17 jettisoned bombs in the sea off the Chesil Beach and turned seaward flying 10 feet above the water. At 1540 hours Blue Leader closed with the enemy and fired all his ammunition. Blue 2 commenced his attack and almost immediately hit the water.

Blue Leader stated that he silenced the rear gunner of the Dornier. Blue 3 stated that he thought that Blue 2 was on fire before hitting the sea. Blue 3 who momentarily held off from the attack owing to the accident to Pilot Officer Hewitt was later unable to close with the enemy.

The weather conditions at the time were poor there being considerable low cloud and rain and the sea was rough.

It is considered that Pilot Officer Hewitt was caught in the slipstream of the Dornier and was driven into the sea from low altitude. The Hurricane hit the water at 250 miles per hour and broke up. The body of the pilot was later seen floating on the surface beside a half open parachute.

The Naval authorities were unable to recover the body. It is presumed that Pilot Officer Hewitt was killed in action. 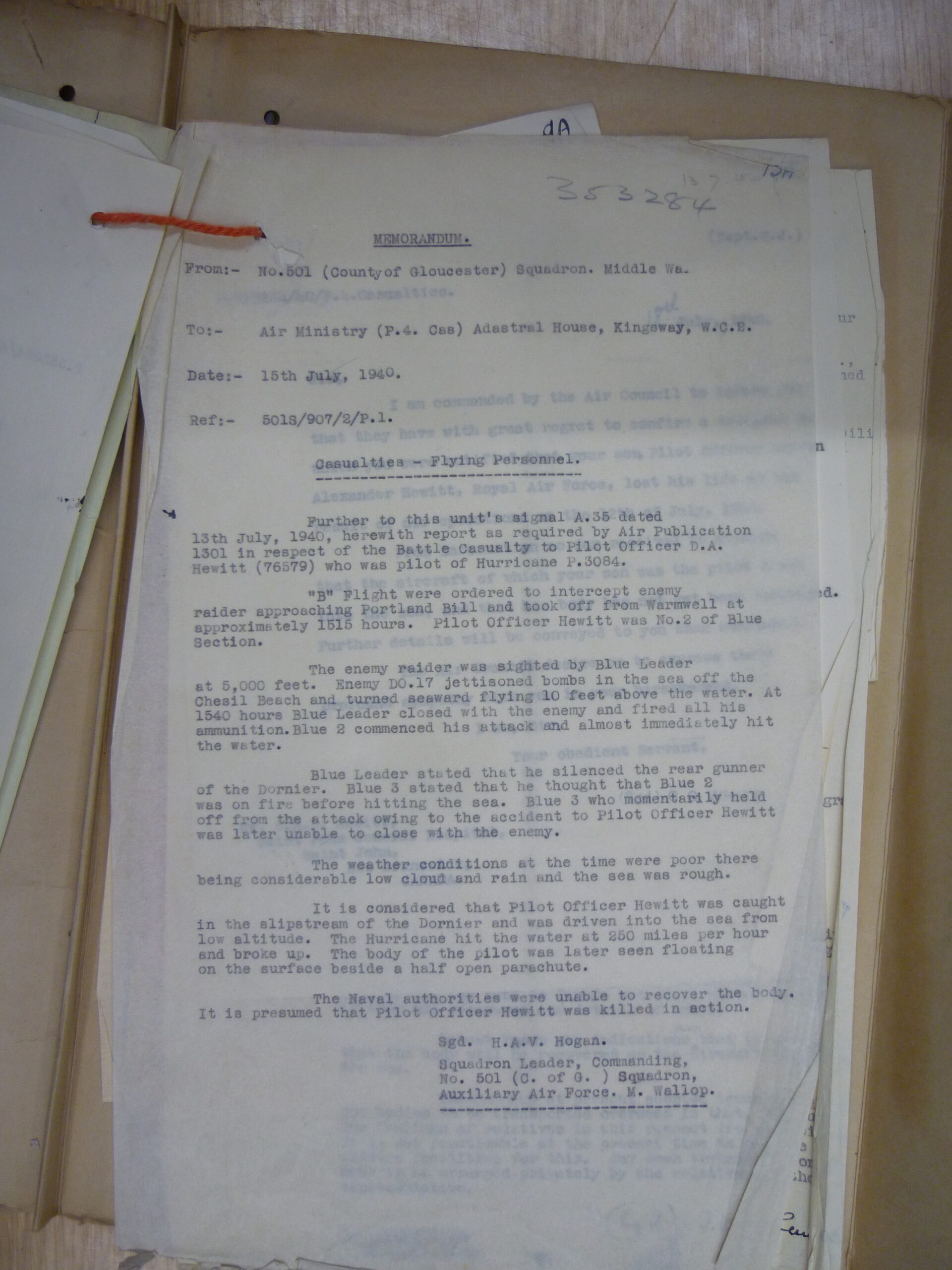 I am commanded by the Air Council to inform you that they have with great regret to confirm a telegram in which you were notified that your or Pilot Officer Duncan Alexander Hewitt, Royal Air Force, lost his life as the result of air operations on the 12th of July, 1940.

From information so far received it appears that the aircraft of which your son was the pilot dived into the sea, and that his body has not yet been recovered. Further details will be conveyed to you when available.

The Air Council desire me to express their profound sympathy with you in your bereavement.

Reason of Loss: Crashed into sea