James Gillan was born in Aberdeen on 24th January 1914 and joined the RAF in January 1936 on a short service commission. On 9th April he was posted for intermediate and advanced training to 4 FTS Abu Sueir, Egypt and he joined 55 Squadron at Dhibban, Iraq on 15th December 1936. Back in the UK, Gillan was supernumerary at No. 1 RAF Depot at Uxbridge in November 1938. He was probably instructing at 2 FTS Brize Norton in 1940 because he was posted from there to 6 OTU Sutton Bridge on 6th July. On the 13th Gillan made a forced-landing at Moulton March, Holbeach in Hurricane 2468 after his engine failed.

Gillan was posted to 601 Squadron at Tangmere on 3rd August 1940. He failed to return from a combat off Portland on the 11th in Hurricane P3783.

He was 26 and is commemorated on the Runnymede Memorial, Panel 5. 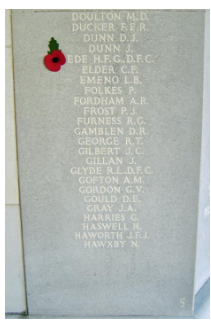