Samuel Leslie Butterfield was born in Leeds and educated at Watford Boys Grammar School. He joined the RAF as an apprentice in September 1929 and later progressed to pilot training. He was with 213 Squadron in early 1940. On May 17th the squadron was sent to Merville in France and took part in defensive patrols, bomber escorts and army support operations until it was withdrawn on the 21st. It continued to operate over France from Biggin Hill and in a period of several days Butterfield shared in the destruction of two Hs126’s and a Do17.

On May 28th over Dunkirk 213 engaged a large enemy force. Butterfield shot down two Me109’s and a 3u88. He was then attacked by a Me110 which he destroyed but his Hurricane suffered three more hits and was set on fire. He baled out and was picked up by a passing ship, the paddle steamer ‘Sundown’, which landed him at Margate.
Three days later Butterfield destroyed a Me109 and probably another. He was awarded the DFM (gazetted 14th June 1940).
He failed to return from a combat over Portland on August 11th 1940. His body was washed up on the French coast and he is buried in Boulogne Eastern Cemetery.
Butterfield was 27 years old.
His Hurricane, P3789, was subsequently found on the seabed off Lulworth, Dorset. 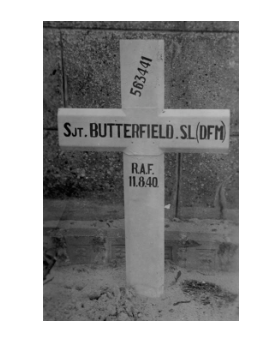 Sgt S L Butterfield DFM RAF 213 Sqn Hurricane P3709 Shot down by fighters off Portland Bill. His body was later recovered and buried in Boulogne Eastern Cemetery France. He was 27, from Leeds, son of Samuel H & Mrs Evelyn Butterfield, and husband to Dorothy L Butterfield of Windsor. A former aircraft apprentice (metal rigger) in 1932 he volunteered to become a pilot and was with 213 by early 1940. 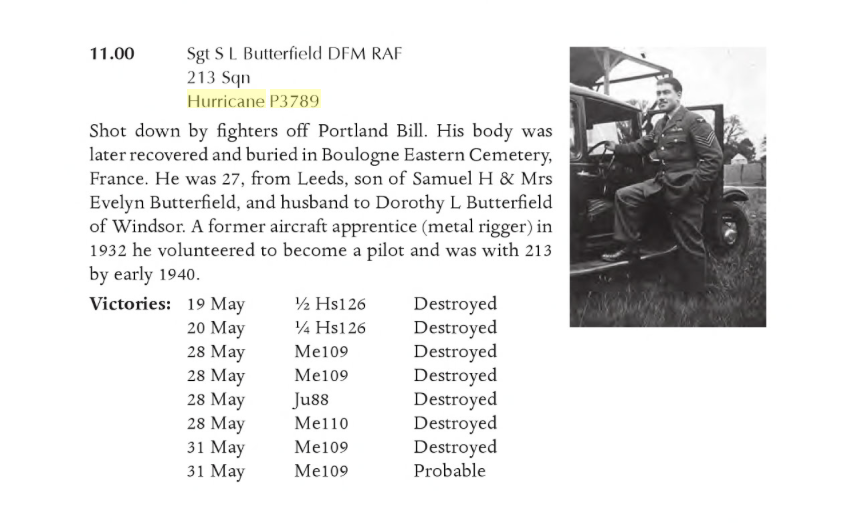 Reason of Loss: Lost at sea