Kenneth Barton Smith was born in Bromley on 29th May 1919 and educated in his early years at Tonbridge, Kent. He then went to Wintringham Grammar School in Grimsby, where his family was then living.

In 1936 he moved to London and worked for an insurance company. He joined the RAFVR on 14th August 1939 as an Airman u/t Pilot.

Called up on 1st September 1939 he went directly to 10 EFTS Yatesbury for elementary flying training. He moved to 3 ITW Hastings on 2nd October and then to 3 FTS South Cerney on 18th November.

When the course ended on 20th May, Smith joined 257 Squadron two days later at Hendon where it was reforming. It was originally intended to have Spitfires but in June it was Hurricanes that arrived.

On 8th August 1940 Smith failed to return from an action off St. Catherine’s Point in Hurricane R4094.

Two days later ‘Lord Haw Haw’ broadcast his name and address as a PoW but Smith was not heard of again.

He was 21 years old and is remembered on the Runnymede Memorial, panel 19. 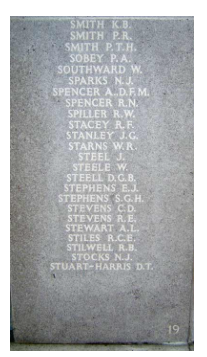