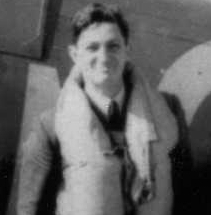 Supermarine Spitfire K9880 pilot FREDERICK HYAM POSENER joined the RAF as a short service commission in December 1938. He was posted to 152 Sqn at Warmwell in early July 1940. On the 27th he was shot down By Oberleunant Homuth of 3/JG 27 over the channel off Swanage, in Spitfire K9880. He is remembered on the Runnymede Memorial panel 9. He was 23 years old. 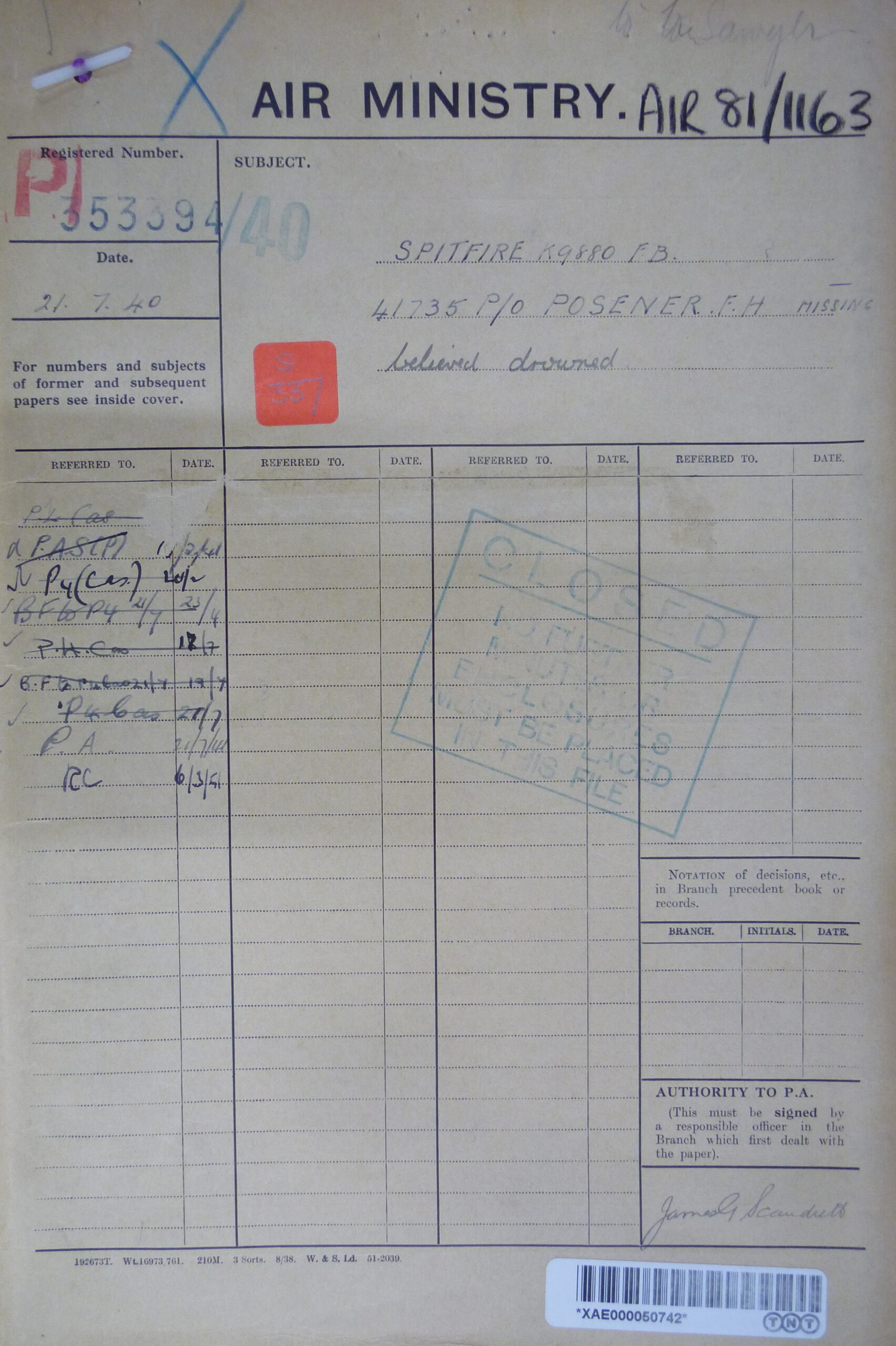 I am directed to refer to your letter dated the 15th of October, and to forward a certified notification of the death of Pilot Officer F.H. Posenor. This departmental notification which is supplied by the Air Ministry free of charge, and is the only notification issued in respet of members of the royal Air Force who are reported missing and subsequently presumed dead, is usually accepted in place of a death certificate by the Principal Probate Registry in Great Britain, and by the chief Assurance Companies. 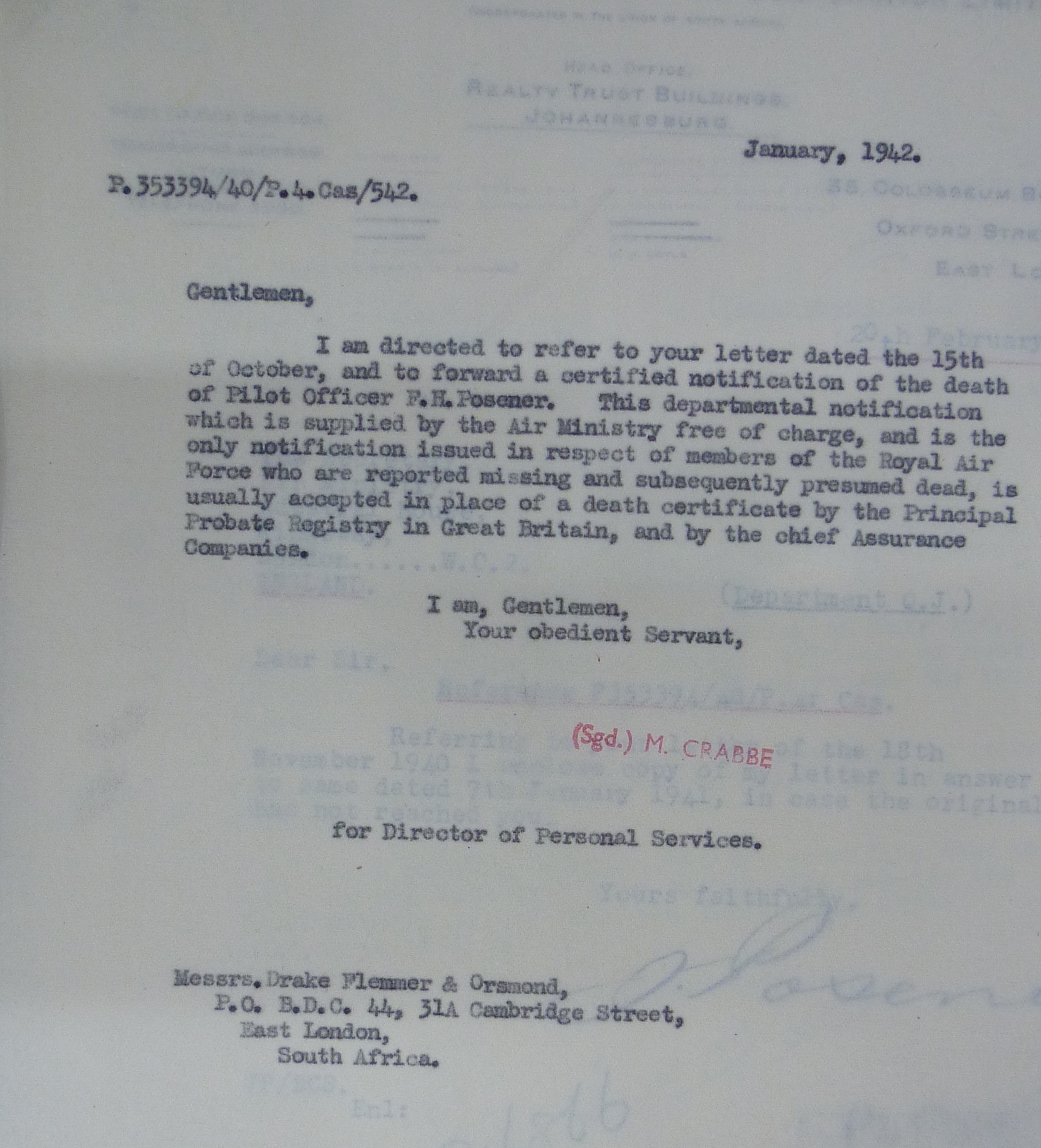 I thank you for your letter of the 18th November 1940 received this day and deeply regret to hear that all efforts to trace my son Pilot Officer F.H. Posener have proved unavailing.

Since he was reported missing on July 20th 1940 I must confirm that no further evidence or news regarding him has been received by me except the information forwarded by your department.

I appreciate all that you have done to trace my dear son and must accept with deep sorrow the inevitable.

I venture to hope that the sacrifice that my only son has made will be a little help towards the final victory of our dear old England and those associated with us. 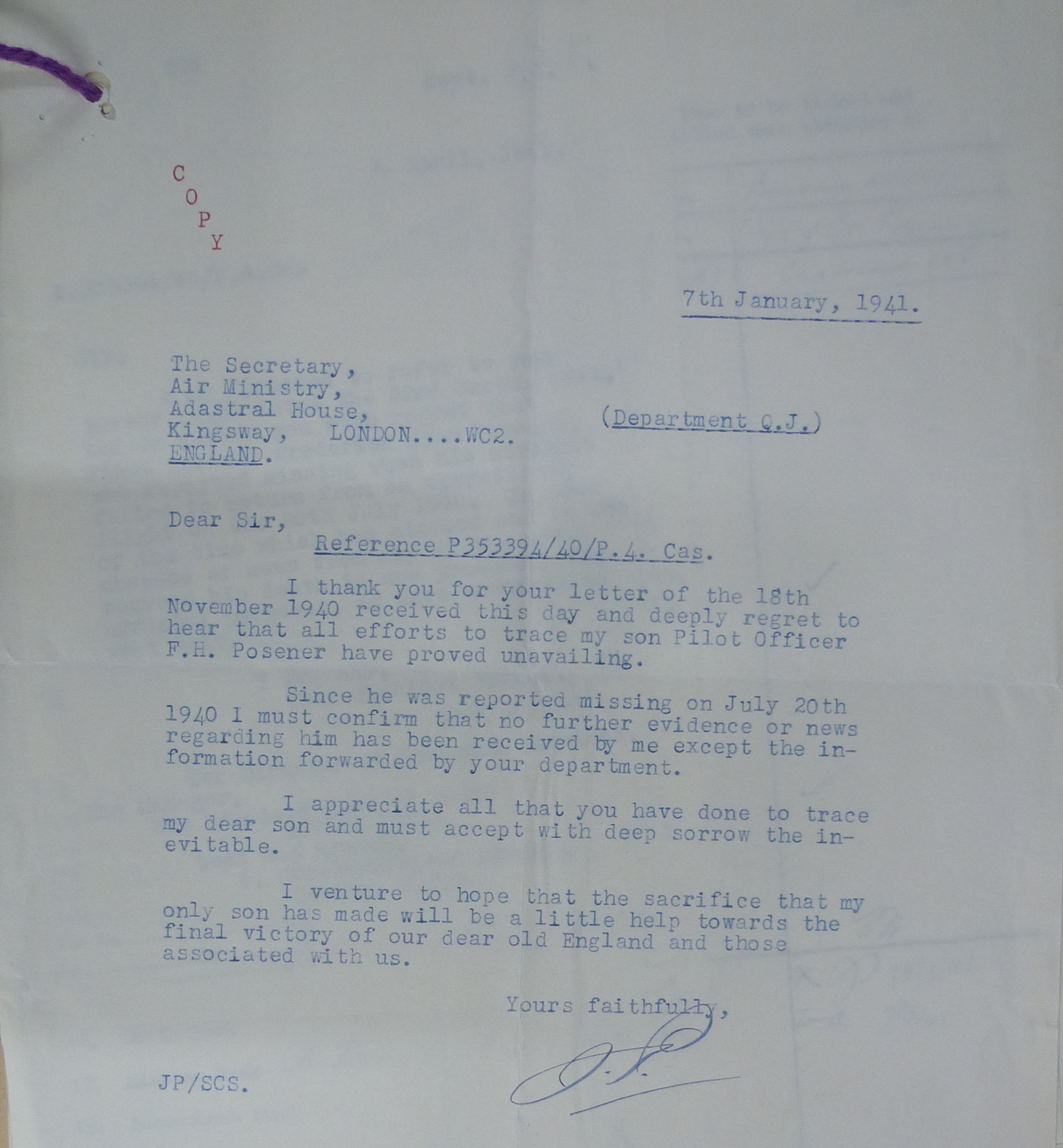 I am directed to refer to your letter (A.R) dated the 22nd March, 1941, and to inform you with regret that Pilot Officer Frederick Hyam Posener, was reported missing when his aircraft failed to return from an operational flight on the 20th July 1940. In view of the which has elapsed and in the absence of news from any of the usual sources his death is now presumed, for official purposes, to have occurred on that date. 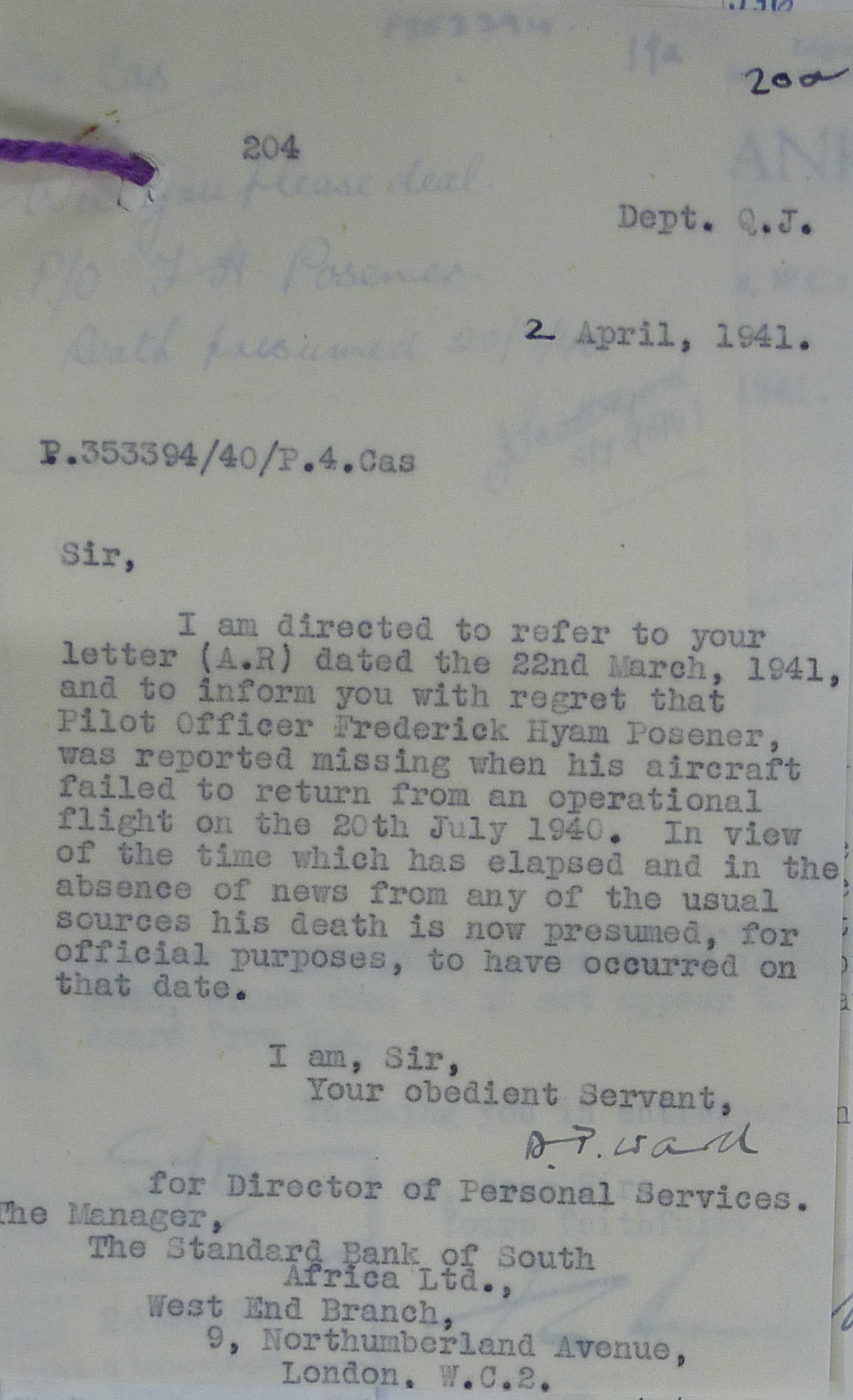 I thank you for your letter of the 18th November 1940 received this day and deeply regret to hear that all efforts to trace my son Pilot Officer F.H. Posener have proved unavailing.

Since he was reported missing on July 20th 1940 I must confirm that no further evidence or news regarding him has been received by me except the in-formation forwarded by your department.

I appreciate all that you have done to trace my dear son and must accept with deep sorrow the inevitable.

I venture to hope that the sacrifice that my only son has made will be a little help towards the final victory of our dear old England and those associated with us. 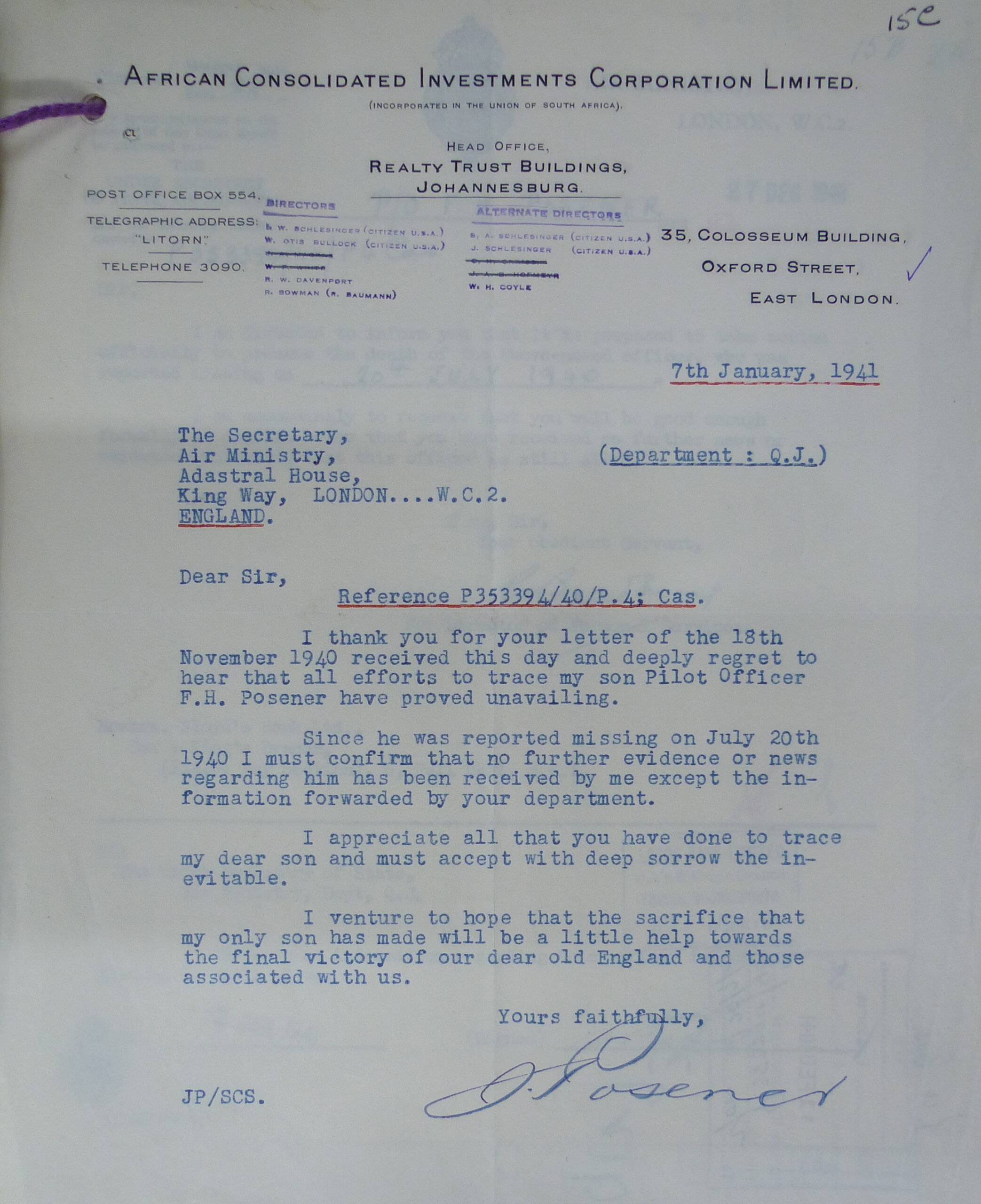 I am directed to refer to a letter from this department dated the 23rd July, 1940, and to inform you that it is regretted that no further news has been received of your son, Pilot Officer Frederick Hyam Posener, since he was reported missing and believed to have lost his life on the 20th July, 1940.

The aircraft was one of a formation which took off at 12.45pm on the 20th July on patrol duty with a convoy. According to a report from one of the pilots who returned from the patrol it is stated that your son’s aircraft was lost sight of when enemy aircraft were encountered.

He failed to return to the base, and it is known that a pilot descended by parachute, it is feared that his aircraft may have been forced down into the sea. A search was made by aircraft and surface vessels, but with no success.

In the absence of definite news of your son, it will be necessary, after the lapse of approximately six months from the date of the occurrence, to presume his death for official purposes. When such action is contemplated a further letter will be addressed to you.

I am to add an expression of the Department’s sincere sympathy with you in your great anxiety. 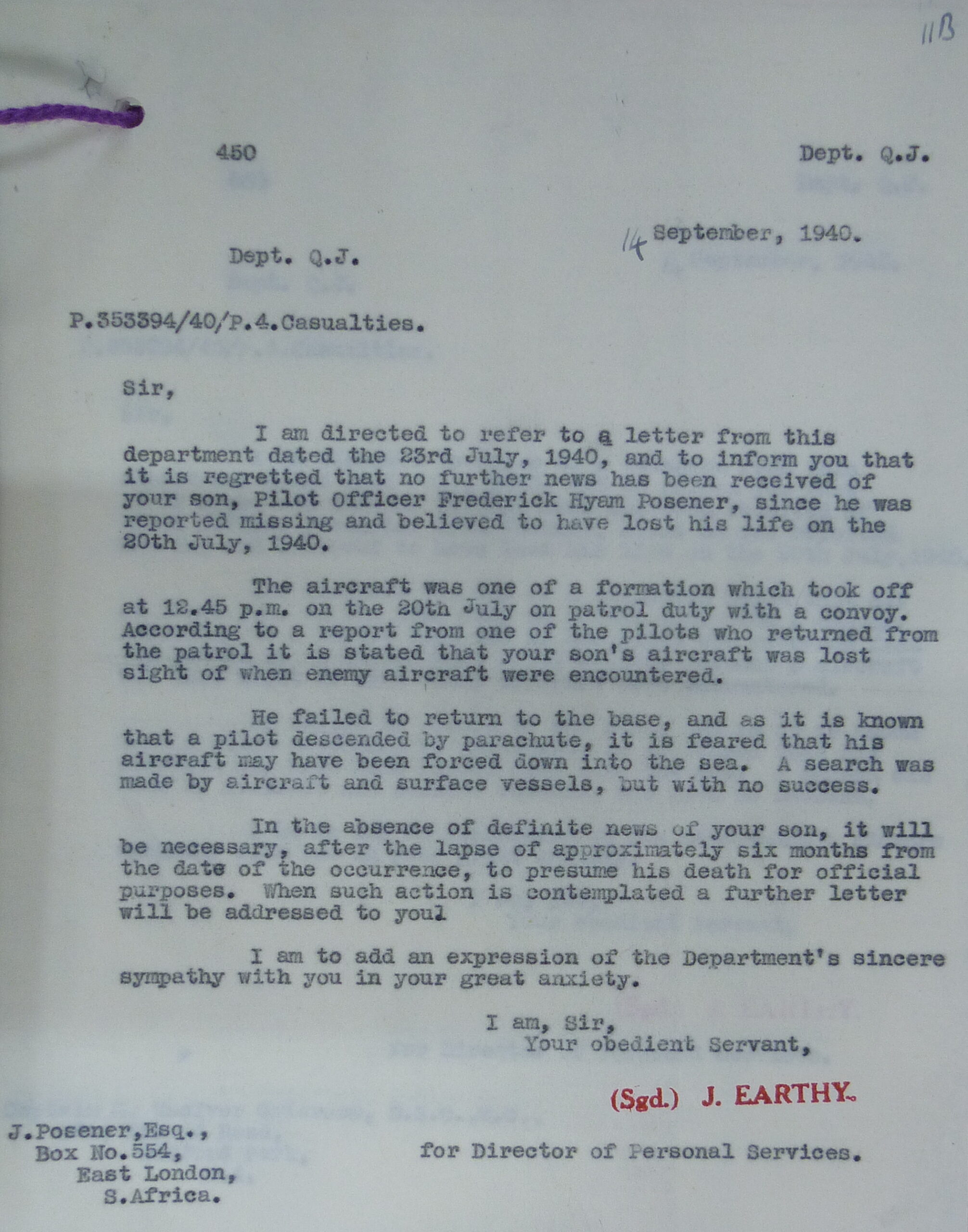 I was leader of green section when B Flight were ordered to take-off and patrol convoy 7 miles S. of coast at 1245 hours on the 20th. Green 2 and 3 were P/O Williams and P/O Posener, respectively.

The section was in vic for the take-off and for a short time afterwards until we left the coast we went into sections astern with blue section leader, and green 3 covering our tail by weaving about behind and above. The last time I remember noticing him consciously, was about one mile out to sea, when I looked back to see if he was covering properly and was he doing fairly wide sweeps out to each side. Afterwards, my attention was concentrated ahead as bandits were expected.

After reaching and patrolling the convoy for a short time, the flight went into line astern. We were S. of the convoy in this formation, when I heard and R/T transmission ending in the word “tail”. This was followed immediately by another transmission which I thought was from the same person, but evidently came from blue 2. R/T reception was very bad and I could distinguish very little of the message until blue 2 took over the lead and led the flight down on to the rear of the convoy, after two machines which he had seen. We failed to find them but in circling we saw a patch of mud and oil on the surface, and circled there for some time.

In the meantime, green 2 was trying to get a message to me, but I could not understand it until I looked round and discovered green 3 was missing. I then deduced that the patch on the surface was made by his machine and we cruised around until the destroyer picked up a pilot whom I thought must have landed in the sea by parachute. We then returned from patrol. That evening I was informed that the pilot who was picked up by the destroyer was not P/O Posener, but a Sgt/Pilot of 238 Squadron. 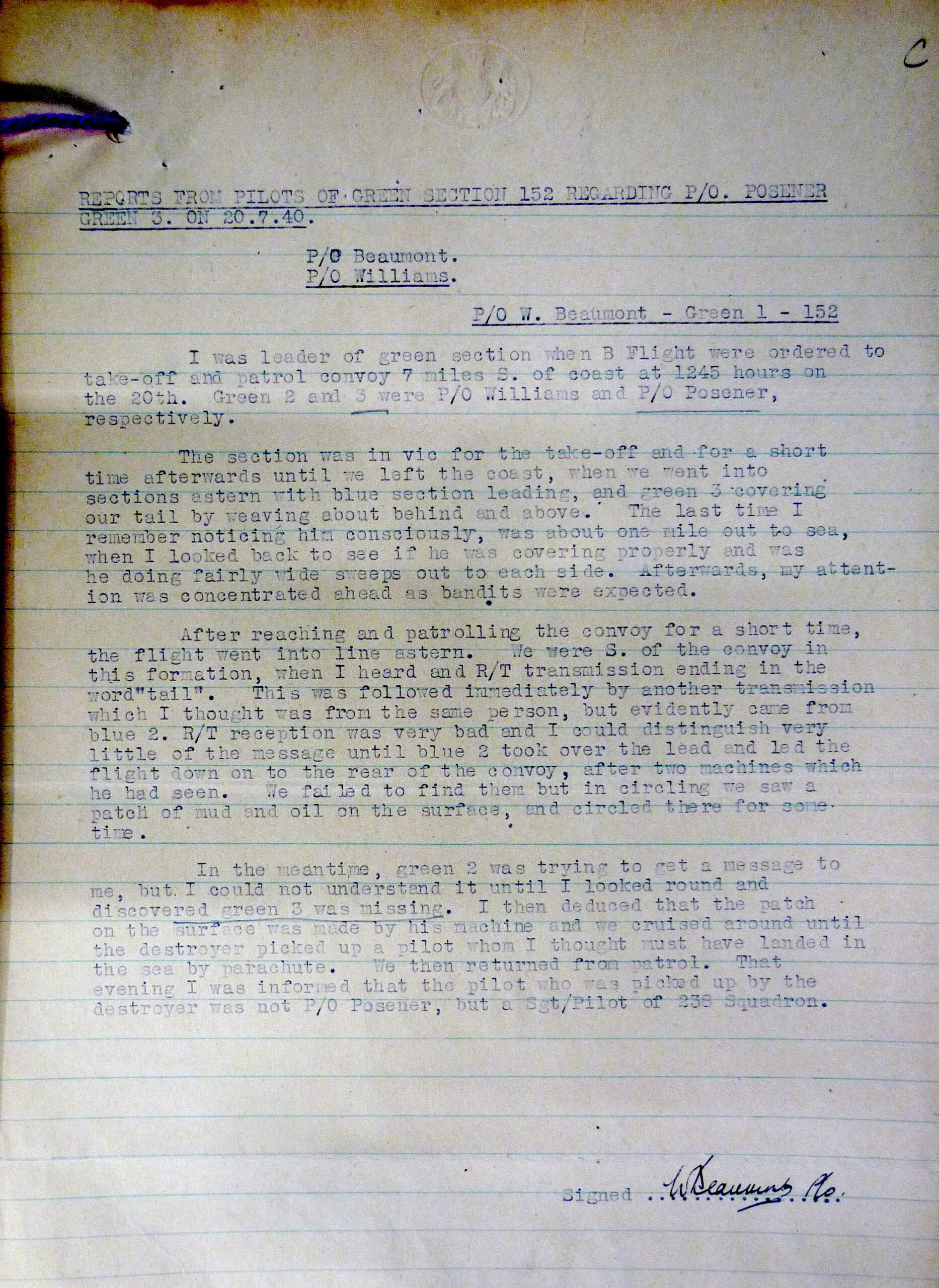 The last time I saw green 3 we were about 1/2 mile to the N.W. of the convoy, and I saw him in my mirror and would say he was from 2/300 yards behind me. At that time, we were patrolling at 10,000 feet. The sky was clear, but as there was bright sun, visibility upwards was very difficult.

I continued to patrol with green 1, and never saw green 3 again.

I saw one aircraft dive on the south side sometime afterwards (probably about 20 mins.). This aircraft dived into the sea and was being fired at by two aircraft. As this happened at some considerable distance away, I could not identify whether the aircraft was ours or hostile.

5 mins afterwards and to the E. of me, I saw parachute descending approx 26 miles out to sea S. of Bournemouth. i spoke on R/T to my leader, but he could not hear me, and I could not hear him. R/T during the whole patrol was very bad. We then returned and circled parachutist. 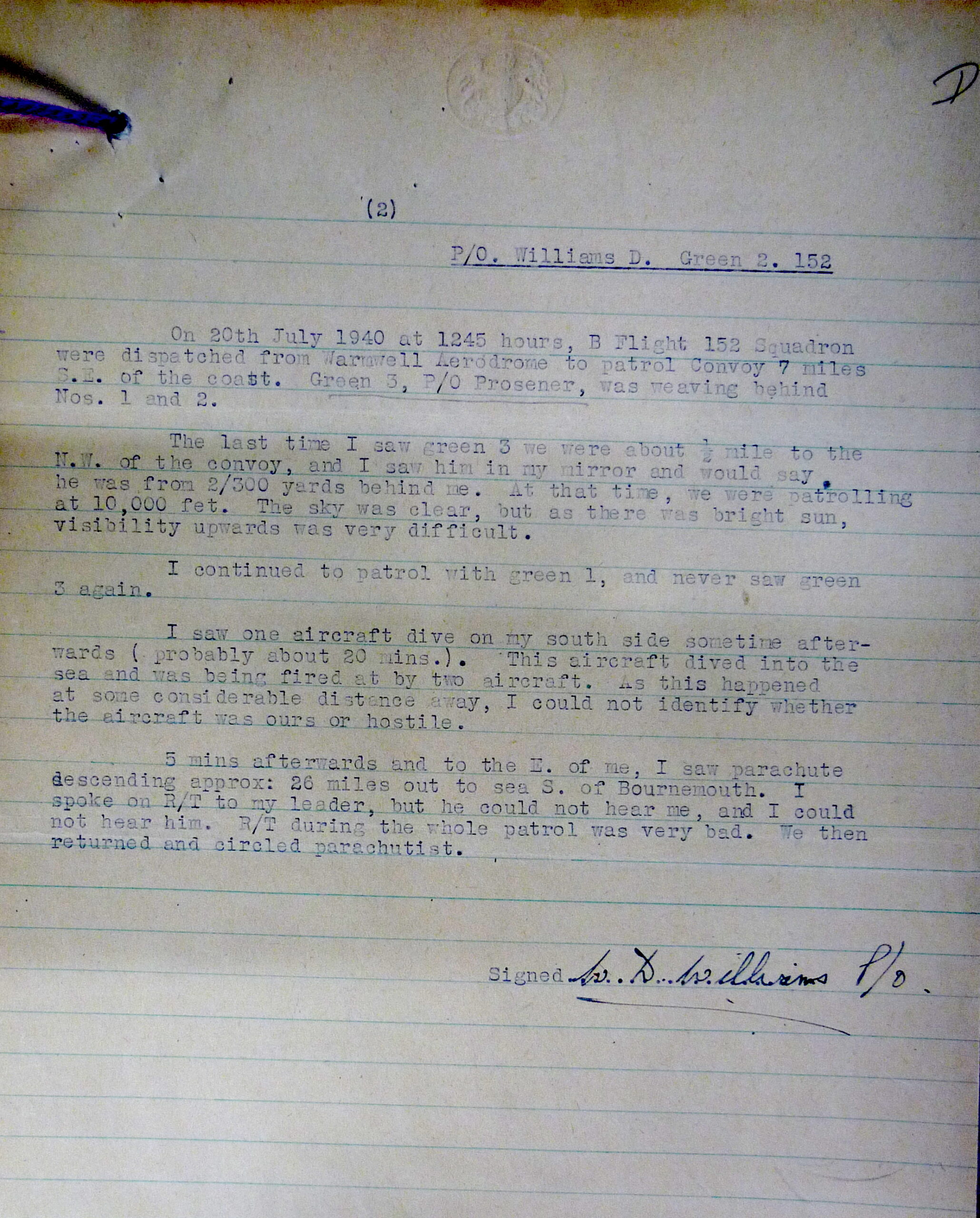 I was milling about over convoy with my section, and getting into position to attack E/A at 9,000ft.

The following more or less happened simultaneously. I first saw a Hurricane going down in flames below me, the pilot got out and landed ahead of the convoy and out to starboard. He subsequently turned out to be Sgt. Parkinson. He was my No. 3. Secondly I saw below me another aircraft going down, not in flames. The pilot of this also baled out and landed fairly near the convoy, but slightly astern to starboard. I could not go down after him, because at this moment I caught sight of a ME.109 passing underneath me going in the direction of France. I attacked this aircraft and shot him down, into the sea I when I returned to the convoy there as no aircraft in sight, but I noticed the destroyer had picked up the pilot who had landed in front of the convoy. I could not see any sign of the pilot who had landed behind. I then received orders to land as apparently I was the only aircraft left flying. I am very surprised that no vessel in the convoy made any attempt to pick him up as apparently he landed so near it. No other pilot in my section saw this aircraft or the parachutist go down. 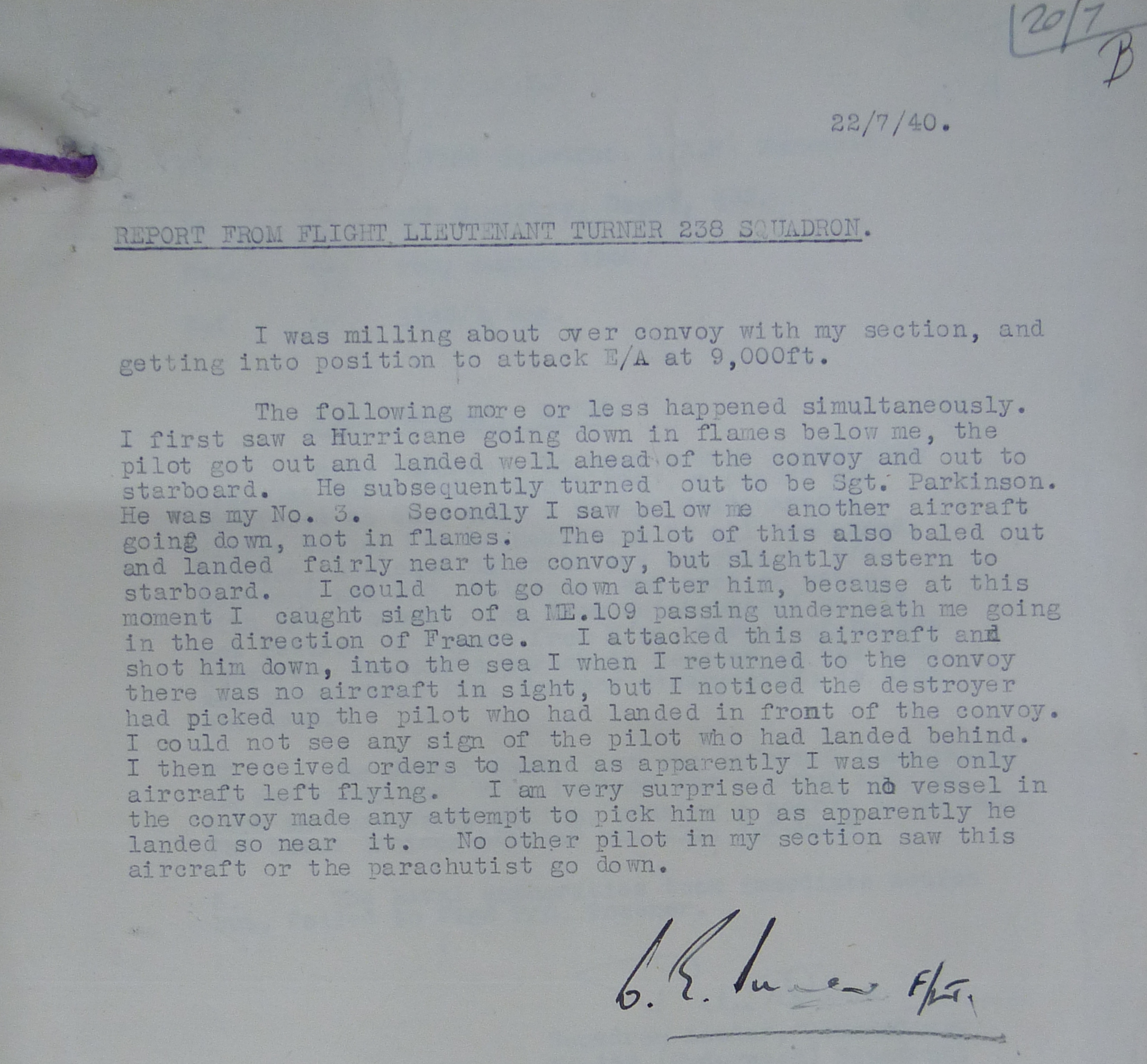 With reference to your letter A.99919/40/ P.4. Cas dated lst. August 1940, a report was submitted to this unit’s Sector Headquarters, Middle Wallop for transmission to all concerned. However, enclosed herewith are reports by P/O. Beaumont and P/O. Williams, who were on patrol with P/O. Posener, and from which patrol he did not return. A report from F/Lt. Turner of No.238 Squadron, who saw a parachute descend at the time and place where P/O. Posener disappeared, is also enclosed.

2: The Sector Controller was informed immediately it was known that P/O. Posener was overdue and, he took the necessary action, causing a search to be made. The Naval liaison Officer was also informed. 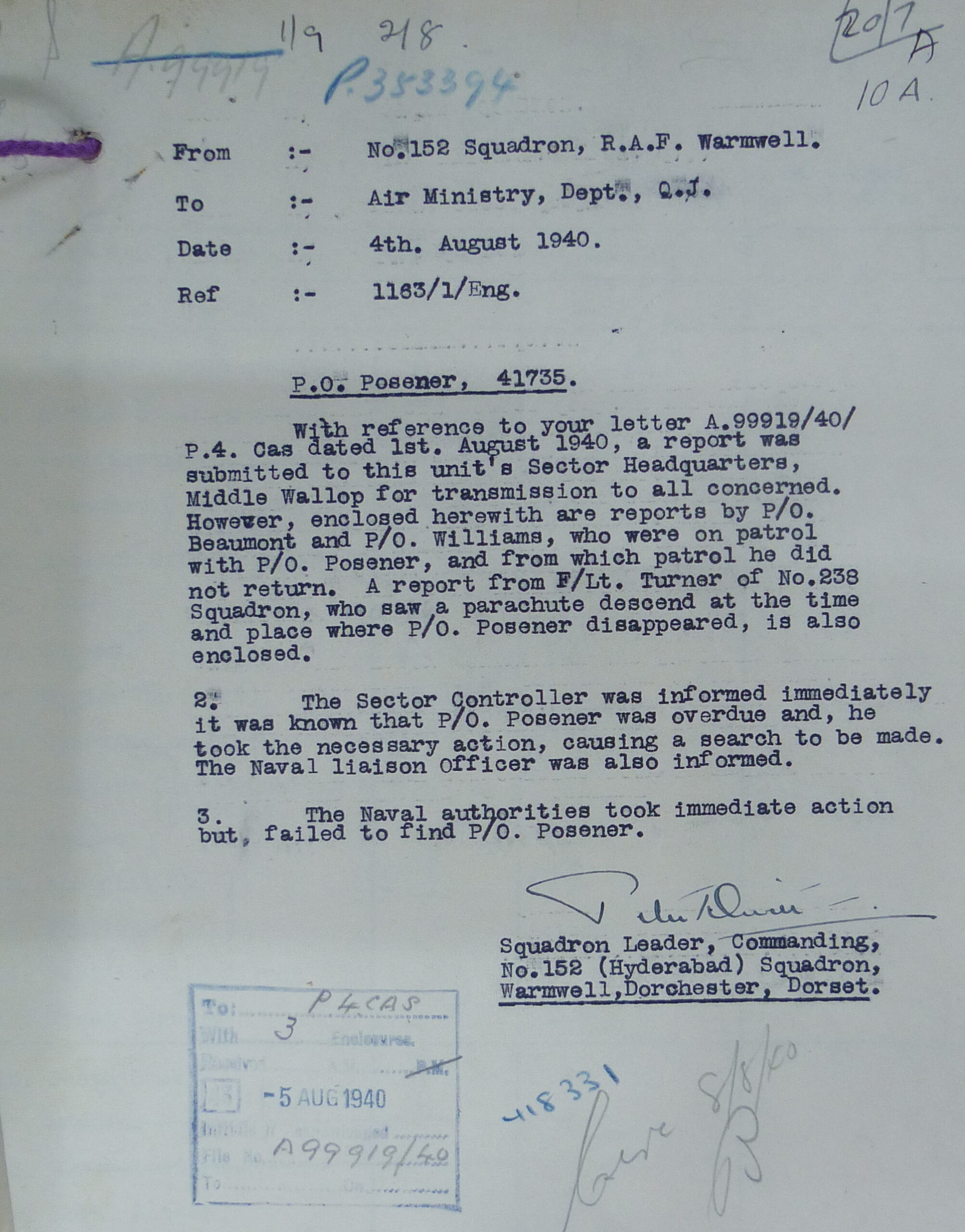