F/Lt E.Chritopher Deanesly of No 152 Squadron was slightly wounded in combat with a Ju 87 on the 25th of July 1940. He was was shot down 3 miles off Portland in a Spitfire I (K9901). After being rescued by a ship he spent some time in hospital before flying again. On the 26th of September 1940 he was shot down and wounded again. This time, 10 miles off Swanage he baled out of his stricken Spitfire I (K9982) after combat with a He 111 and a Bf 109. Deanesly was located by a Lysander and then picked up by the S.S. Empire Henchman.

Edward Christopher Deanesly was born on 27th January 1910 in Wolverhampton and educated at Wellington College. He joined 605 Squadron, Auxiliary Air Force in early 1937 and was commissioned on 18th March.

Called up on 24th August 1939, Deanesly was posted to 152 Squadron when it was reformed at Acklington on 1st October. He was still with the squadron in early July 1940. On the 25th he shared a Do17 and a 3u87. His Spitfire, K9901, was damaged by return fire from a 3u87, which punctured his glycol tank. He ditched in the Channel south of Portland, was picked up by the SS Empire Henchman, landed at Lyme Regis and admitted to hospital, wounded.

Deanesly was shot down again on 26th September during a combat with Me109’s twelve miles south of the Needles and baled out, wounded. He was rescued by a Royal Navy launch and landed at Swanage. His Spitfire, K9982, crashed into the Channel. After a spell in hospital, Deanesly became a Fighter Controller. On 23rd November 1940 256 Squadron was reformed at Catterick with Defiants as a night-fighter unit and Deanesly joined it as a Flight Commander. Over the Birmingham area during the night of 10thillth April 1941 Deanesly, with Sgt. W3 Scott (of New Zealand) as his gunner, destroyed a Neill, on 3rd/4th May they shot down a Ju88 over Merseyside and also a Do17 which crashed in North Wales. On 7th/8th May they destroyed a Neill over Manchester.

Above: Deanesly (left) and Scott
Deanesly was awarded the DFC (gazetted 30th May 1941) and Scott the DFM. They were decorated by the King in October. Deanesly took command of 256 Squadron in September 1941 and led it until April 1942. He commanded RAF Castle Camps until October, being then posted to West Africa where he was involved with maintaining the aircraft ferry route from Takoradi to Egypt. After commanding 298 Wing in the Middle East from January to August 1943, Deanesly took over 114 Wing until March 1944 when he was posted back to the UK. He became CFI at 107 OTU, Leicester East, training pilots on Dakotas for paratroop and glider-towing operations. Deanesly took command of 575 Squadron, equipped with Dakotas, in December 1944. He took part in the Rhine crossings in March 1945, towing a glider.
Deanesly was released from the RAF in September 1945 as a Wing Commander. He died in 1998. 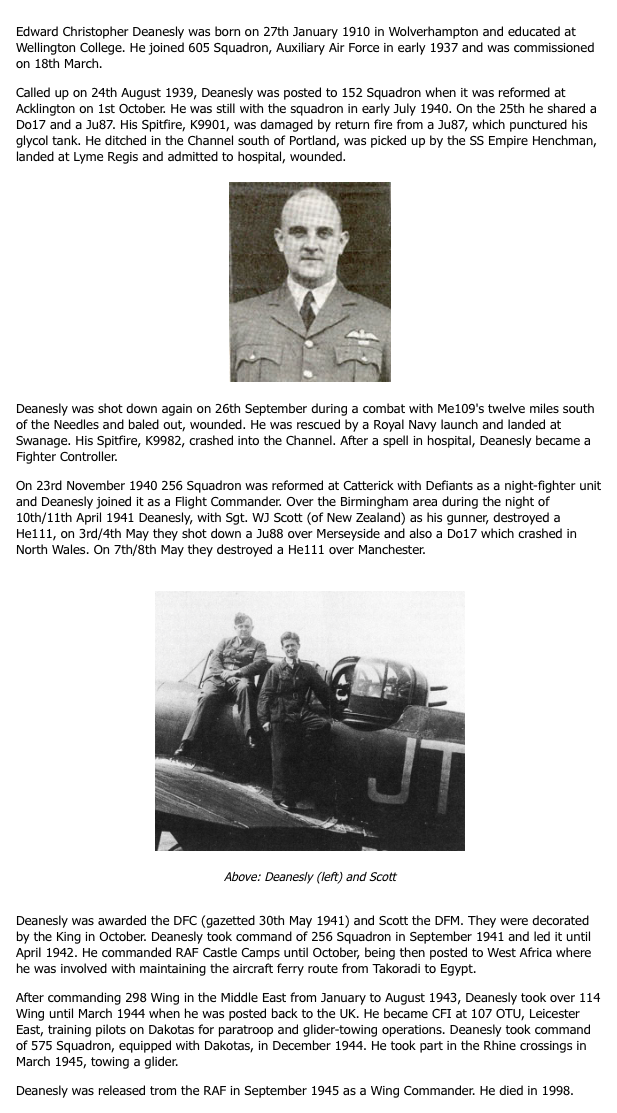 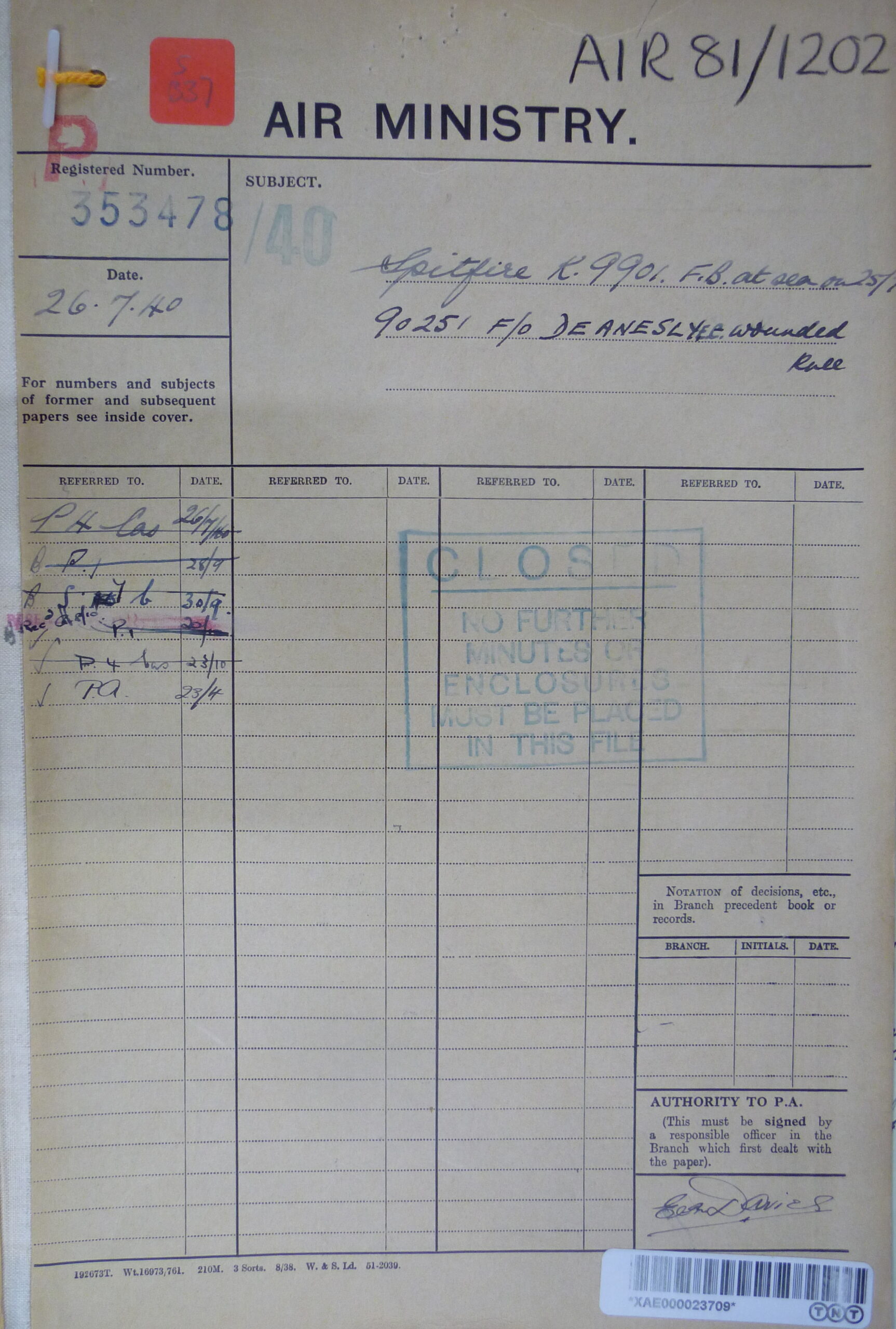 I have the honour to refer to your letter of the above reference dated 22nd. August and to confirm that the rescue referred to concerned a pilot of this Squadron, as reported in my signal T.206 dated 25/7.

As far as I am concerned, I have done nothing in the mater of recommending the crew for good work carried out. I have no doubt that they it very efficiently, but so have all the others.

I have no recommendation to make.

I understand that F/O. Deanesly wrote to J.E. Fisher, Master of the tug “Empire Henchman” thanking him for the way in which they promptly rescued him. I think that this is sufficient. 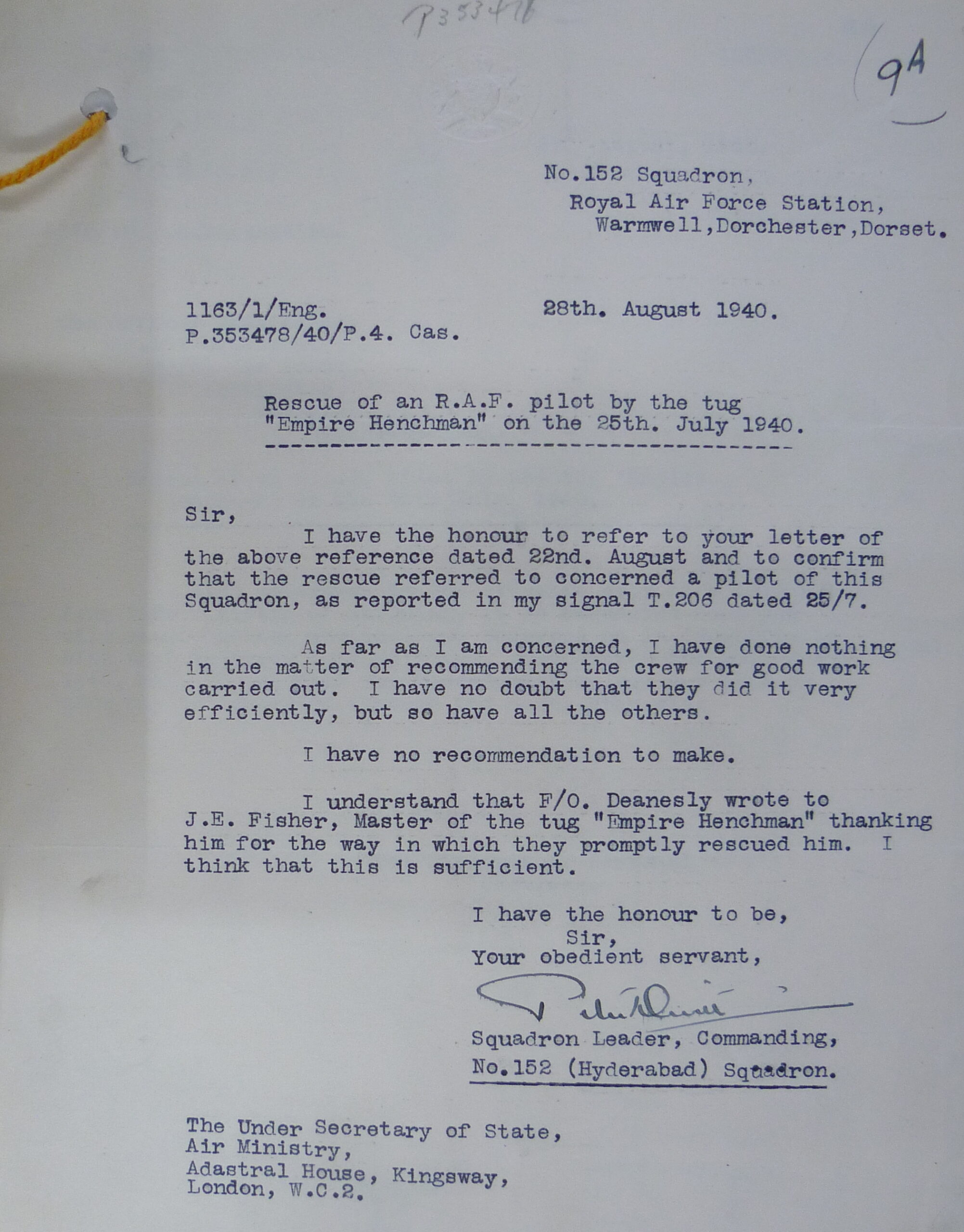 I am directed by the Minister of Shipping to state, for the information of the Air Council, that a report has be received in this Department from the Master, J.E.Fisher, of the Tug “EMPIRE HENCHMAN” Official No.167402, managed by Mr. Thomas C. Spink, Nelson Street, Hull, regarding the rescue of an airman.

The report states that on the 25th July the Tug was attacked 10 miles south west of Portland by a formation of 25 to 30 enemy aircraft. After dropping 9 or 10 bombs, with causing any damage to the Tug, the enemy aircraft were chase off by R.A.F. fighters. On a signal from one of the Fighters, the Master of the Tug steamed the direction of his flight and after steaming about one hour picked up a British pilot who had crashed into the sea. The Tug then proceeded to Lyme Regis and transferred the airman to a Motor Boat sent off from the R.A.F. Station.

The Minister of Shipping would be glad to be informed, or the purposes of record, of any action taken by the sir Council in recognition of the above services. 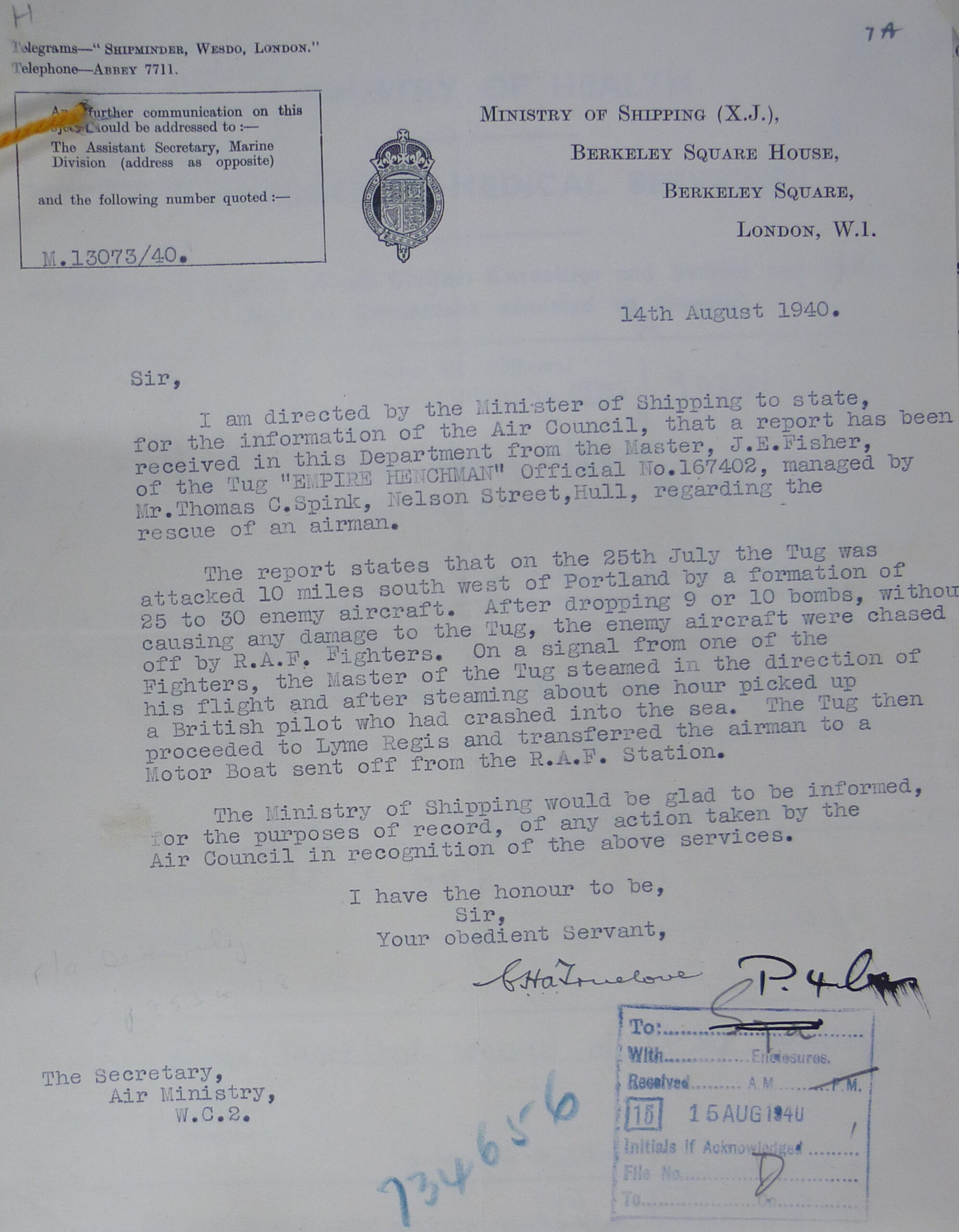 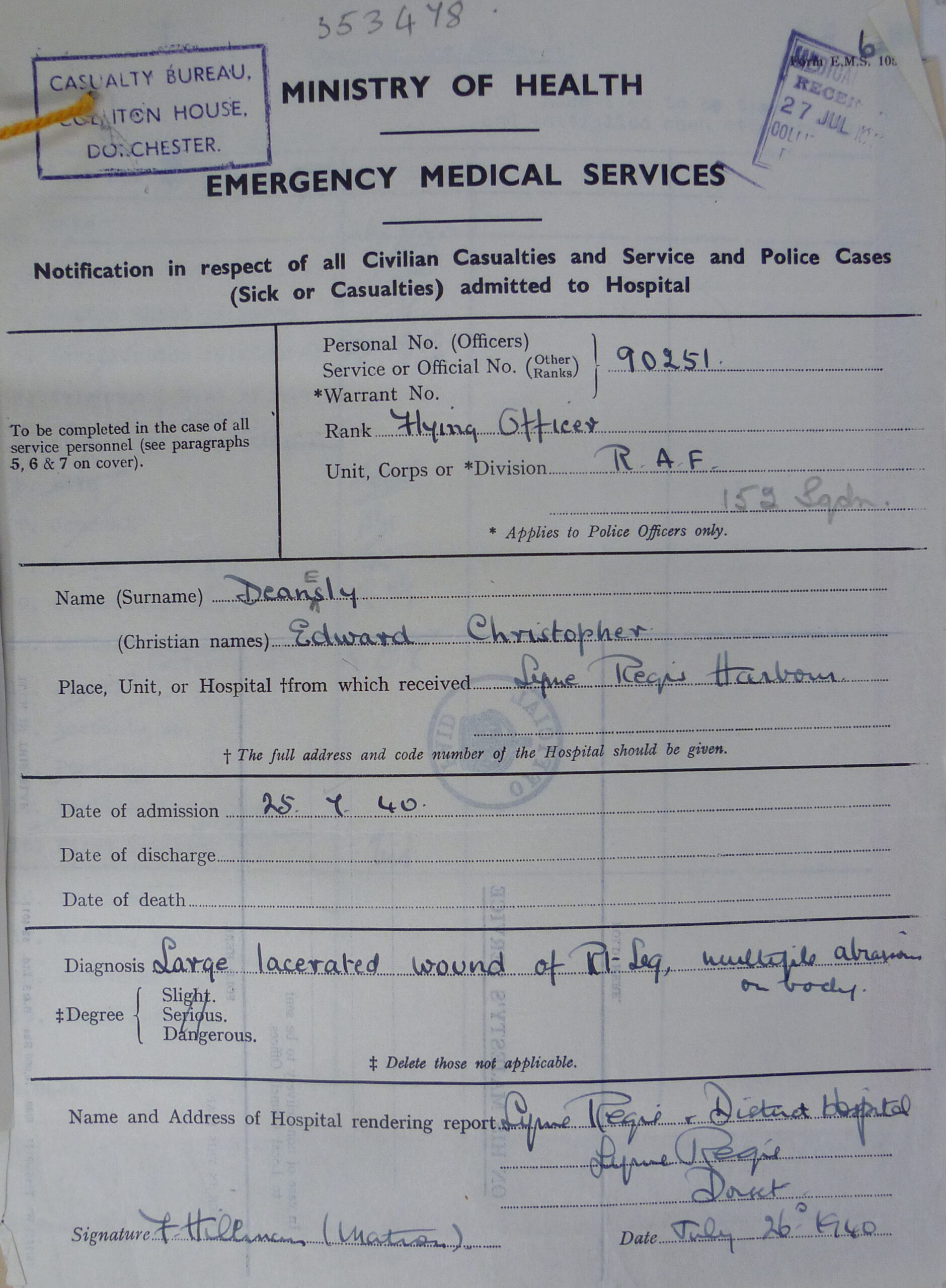