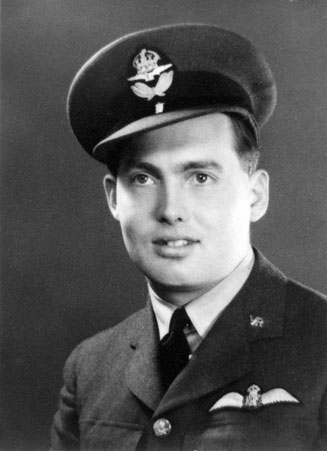 James Buchanan from Iden, Sussex was a fully trained RAFVR pilot at the outbreak of the Second World War. He was commissioned in December 1939 and was posted to No 609 Squadron.

By July 1940, the beginning of the Battle of Britain, No 609 had been moved south to Middle Wallop, Hampshire. On 27 July, James Buchanan was reported ‘missing’ after being shot down by a Bf 109 (later found to be flown by Oberleutnant Framm) in combat when protecting a convoy off Weymouth, Dorset. His Spitfire, N 3023, was seen to crash into the sea. James had died, only 25 years old.

After his death, his war medals were posthumously presented to his family. Eventually due to deaths in the family, they found their way to a distant cousin who had never known James. He decided to pass them on to his girlfriend at the time of his death, Stella Burton.

Stella, who during the war was a WAAF plotter at Fighter Command’s main filter room at Bentley Priory, kept his medals in safe keeping at her home for almost sixty years. She decided to look for a museum that would display James’ medals to remember him and the other pilots of the ‘Few’ who died that summer in 1940. She chose Tangmere Military Aviation Museum and Alan Bower, Director of the museum, accepted the medals from Stella Burton on 15 June 2007.

JAMES BUCHANAN’S MEDALS CAN BE SEEN DISPLAYED IN THE CENTRAL CABINET IN THE MUSEUM’S BATTLE OF BRITAIN HALL.

James Richebourg Buchanan of Iden, Sussex was born on 17th May 1915 and joined the RAFVR in December 1937 as an Airman u/t Pilot. He was fully trained when called up on 1st September 1939. Commissioned in December, he was posted to 609 Squadron at Kinloss on the 26th.
Flying from Drem on 27th February 1940, Buchanan shared in destroying a He111 which was attacking a convoy near St Abb’s Head. Over Dunkirk on 31st May he destroyed a Me109 and damaged a He111. Buchanan was reported ‘Missing’ on 27th July 1940 after engaging a force of Ju87’s over a convoy off Weymouth. The top cover of Me109’s came down and it is thought that Buchanan was shot down by Oblt. Framm of 1/JG27. His Spitfire, N3023, crashed into the sea.He was 25 years old and is commemorated on the Runnymede Memorial, Panel 7.

CERTIFIED that, according to the records of this department, 77033 Pilot Officer James Richebourg BUCHANAN, Royal Air Force Volunteer Reserve, was reported missing and is presumed, for official purposes, to have lost his life on the 27th day of July, 1940, as the result of air operations. 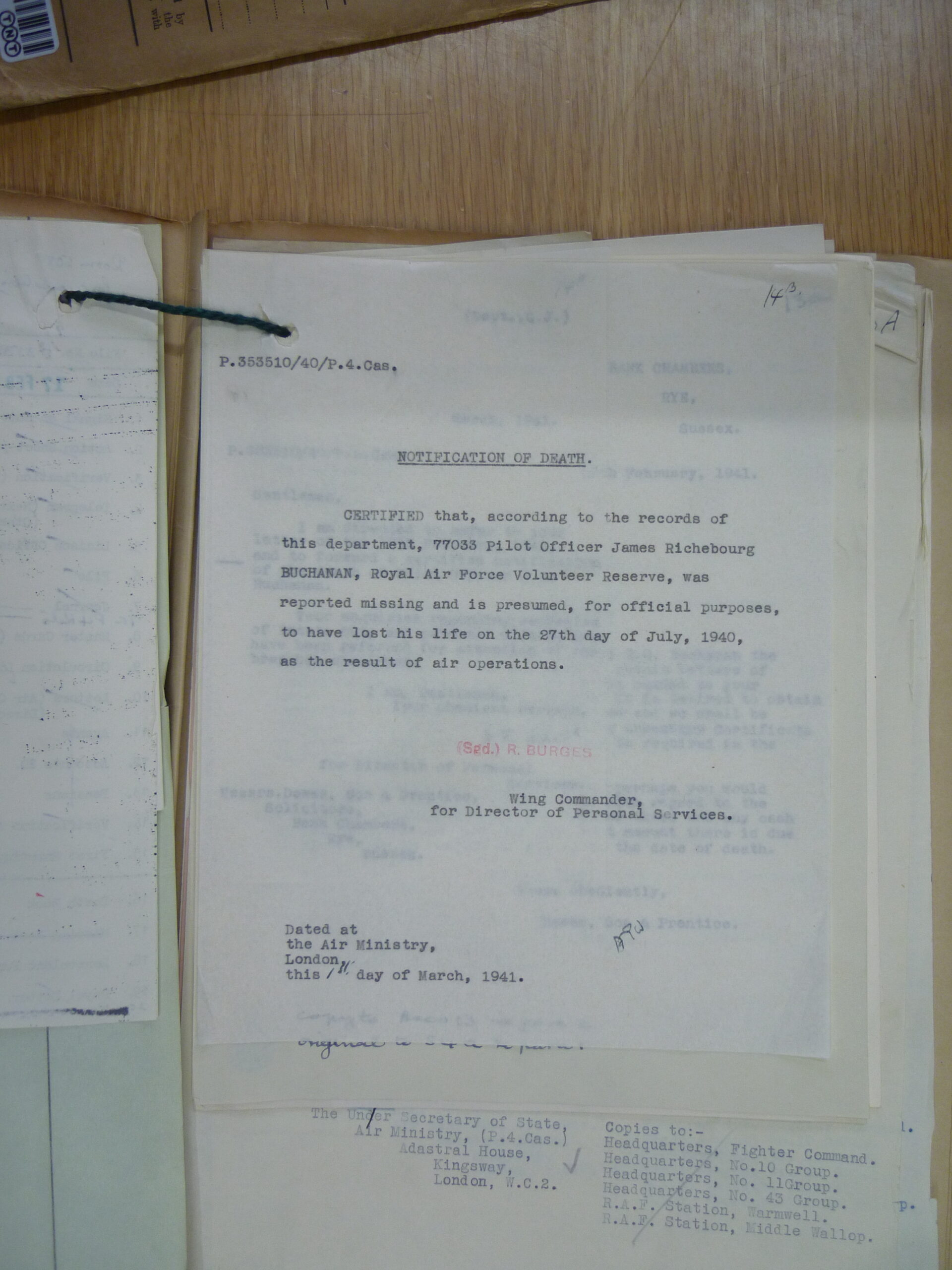 I have the honour to refer to my signal A.817 dated 27th July, 1940 regarding the above incident and submit the following report:-

2. Three Sections were ordered to intercept enemy aircraft near a convoy. Two sections remained over the convoy while “B” Flight flew to the south to engage a force of Ju.87’s which were in three lines astern in parallel formation with one outrider at each side. The Ju.8’s were at 17000 feet with a large force of Me.109’s some 3,000 feet above. Two aircraft dived and fired a short burst on an Me.109. Pilot Officer J.R.Buchanan flew south and his Section lost sight of him. Squadron Leader Fenton of No.238 Squadron saw a Spitfire shot down but could not state definitely if it the one Pilot Officer Buchanan was flying.

3. When the Squadron landed at R.A.F. Station, Warmwell enquiries were started but with no result and Pilot Officer J.R.Buchanan was therefore reported as “missing”. 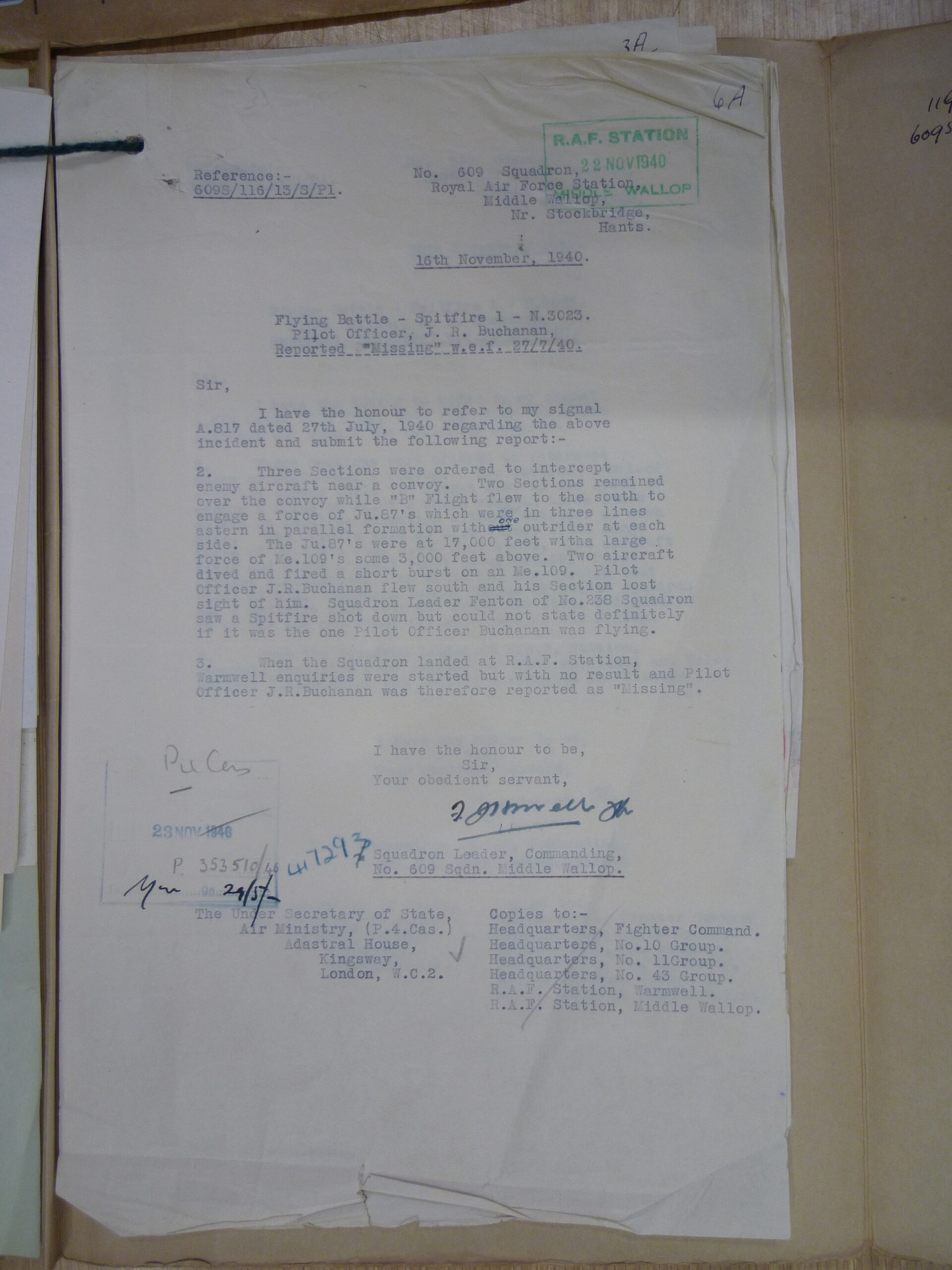 I an directed to refer to a letter from this Department dated the 29th July, 1940, and to inform you that it is regretted that no further news has been received of your son, Pilot Officer James Richebourg Buchanan, since he was reported missing on the 27th July, 1940.

The aircraft was on patrol over the Channel, approximately 15 miles south of Swanage, early in the morning of July 27th, and failed to return to the base. Nothing further has been heard of your son or his aircraft.

I am to add an expression of the Department’s sincere sympathy with you in your great anxiety, and to assure you that should any further news be received it will be immediately communicated to you. 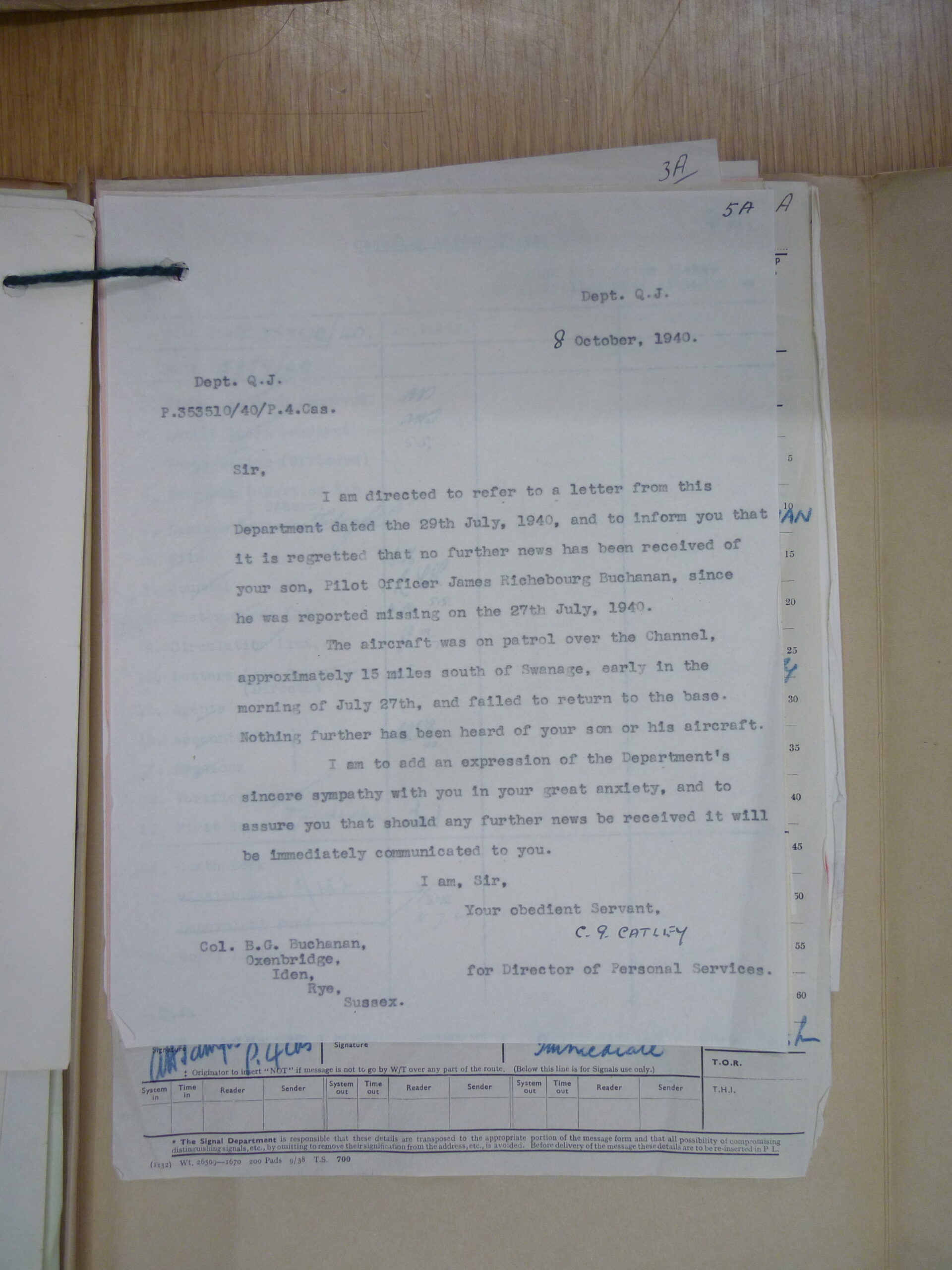