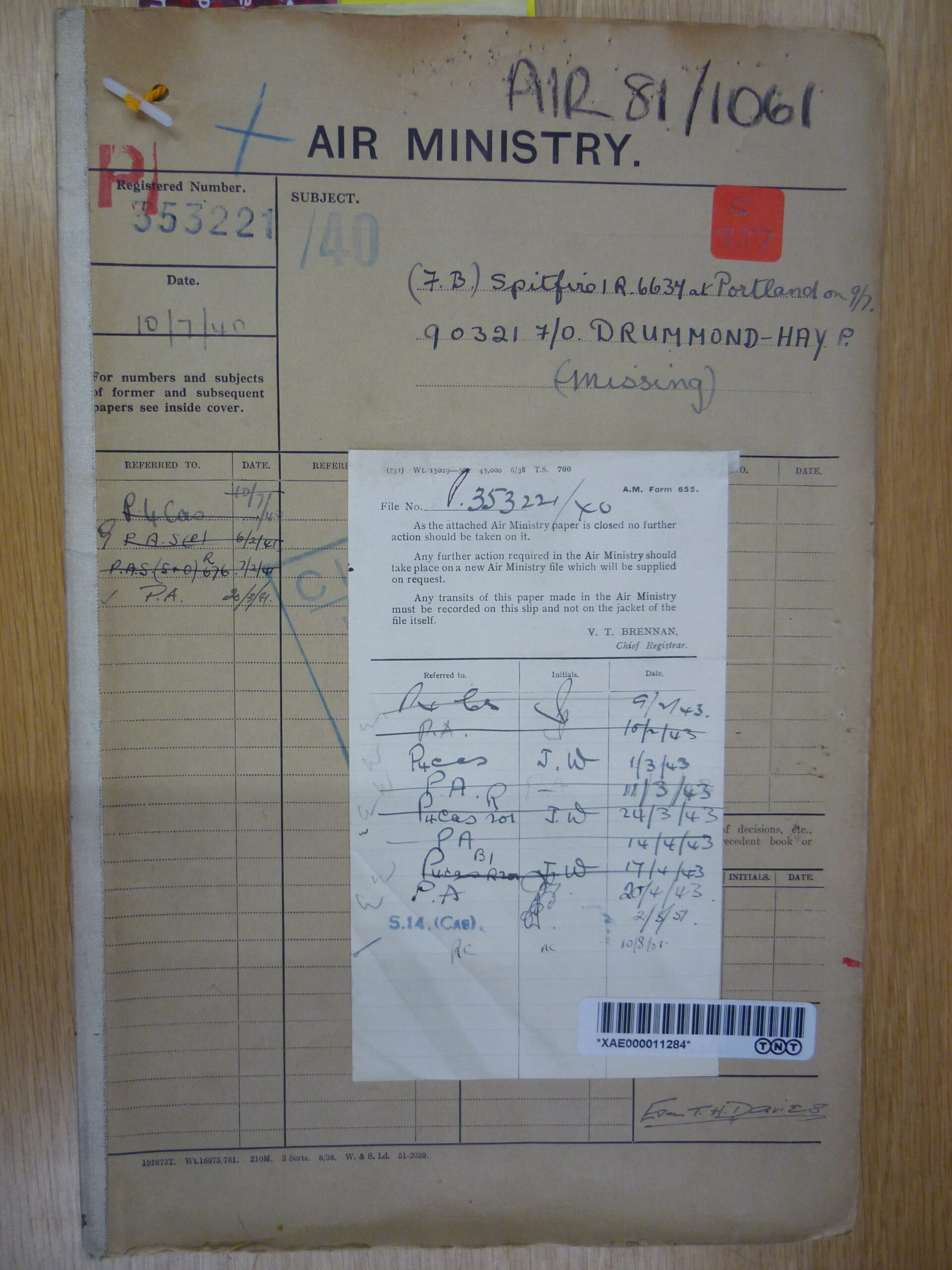 I am commanded by the Air Council to state that in view of the lapse of time and the absence of any further news regarding your husband, Flying Officer P. Drummond-Hay, since the date on which he was reported missing, they must regretfully conclude that he has lost his life, and his death will be presumed to have occurred on the 9th July, 1940.

The Council desire me to express again their sincere sympathies with you in your bereavement and in the anxiety you have suffered. 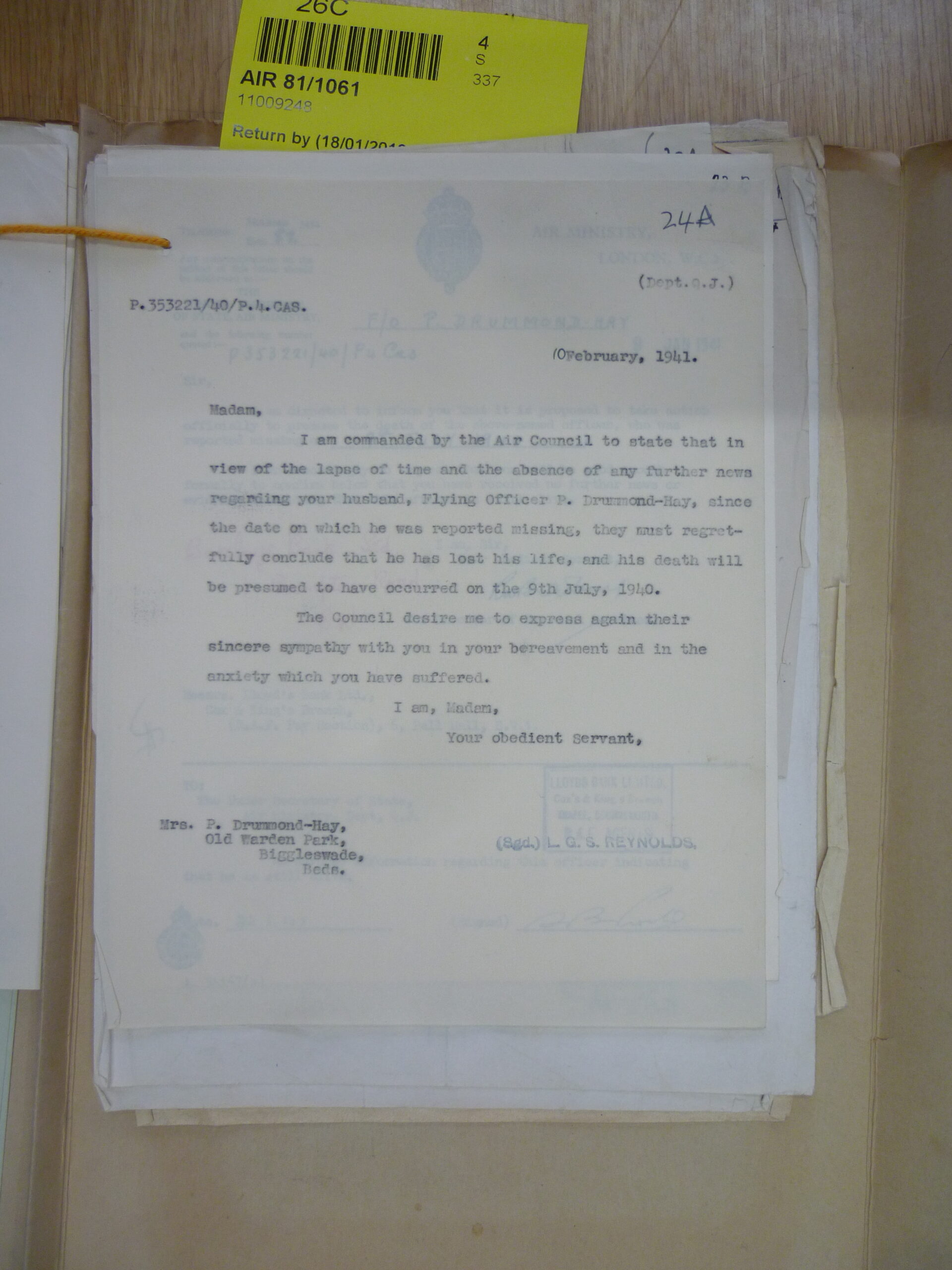 I directed to refer to your letter dated November 28th, 1940, concerning the effects of your husband, and to inform you that under existing regulations the kit and effect’s of Royal Air Force personnel reported missing are secured by the unit and forwarded to the Central Depository of the Royal Air Force at Colnbrook where they are stored for safe custody.

Normally, these effects are retained until the Officer or airman returns, or death is established, or has been presumed for of purposes (this action is usually taken approximately six months after the date of the casualty) but in view of the circumstances mentioned in your letter the Air Ministry is prepared to authorize the release of the effects of your husband provided you are willing to :-

I am to explain that under the Regimental Debts Act, 1893, mess-bills and bills for service uniform ordered within eighteen months of decease rank as preferential /charges. 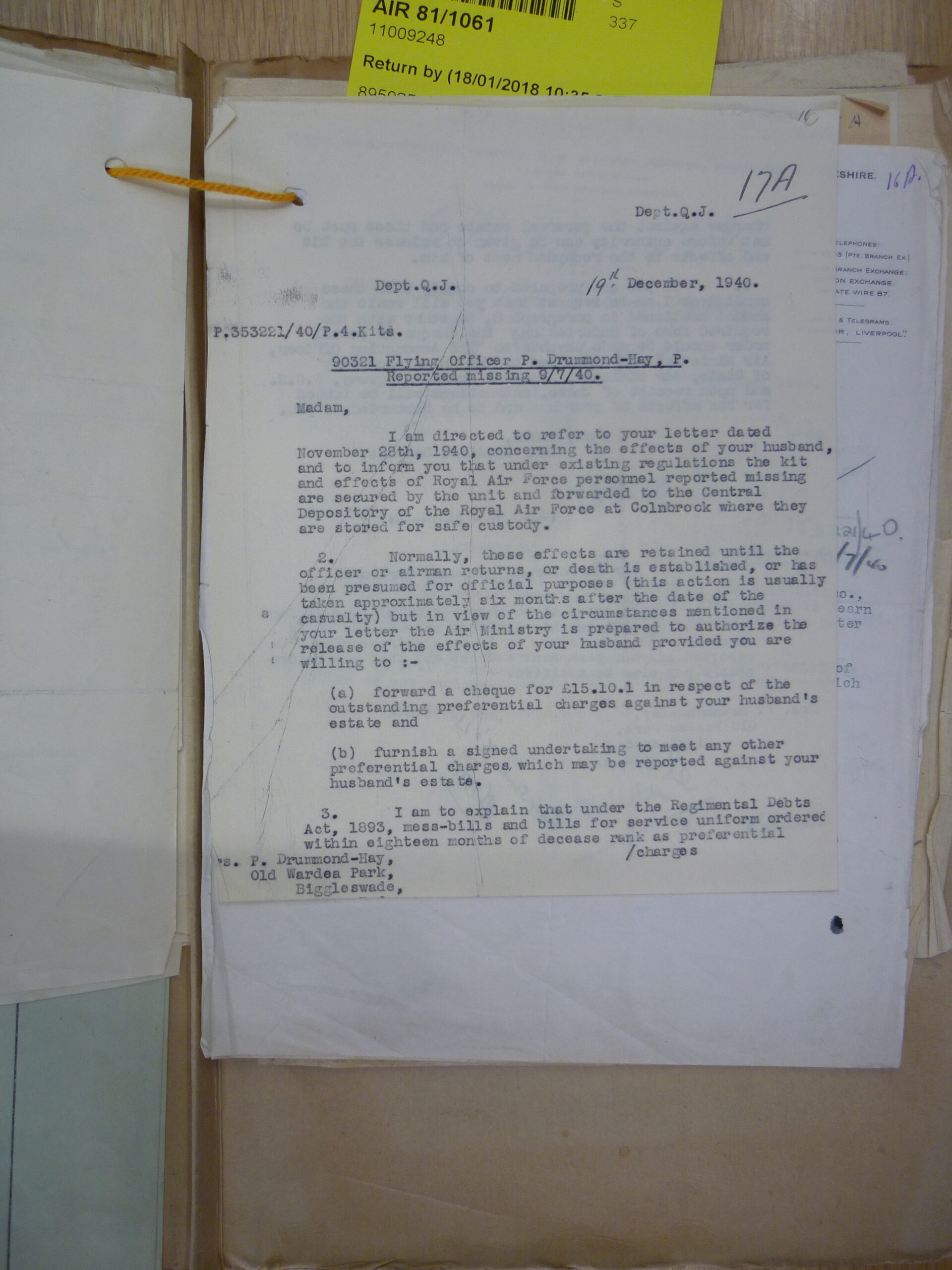 charges against the personal estate and those must be met before authority can be given to release the kit and effects to the recorded next of kin.

It you arc prepared to comply with those conditions I am to request that you will remit the amount mentioned in paragraph 2, together with the required form of undertaking; the cheque or postal order should be made payable to “The Accounting Officer, Air Ministry” and addressed to The Under Secretary. of State, Air Ministry, Adastral House, Kingsway, W.C.2. and upon receipt of these, instructions will be issued for the effects of your husband to be forwarded to you. 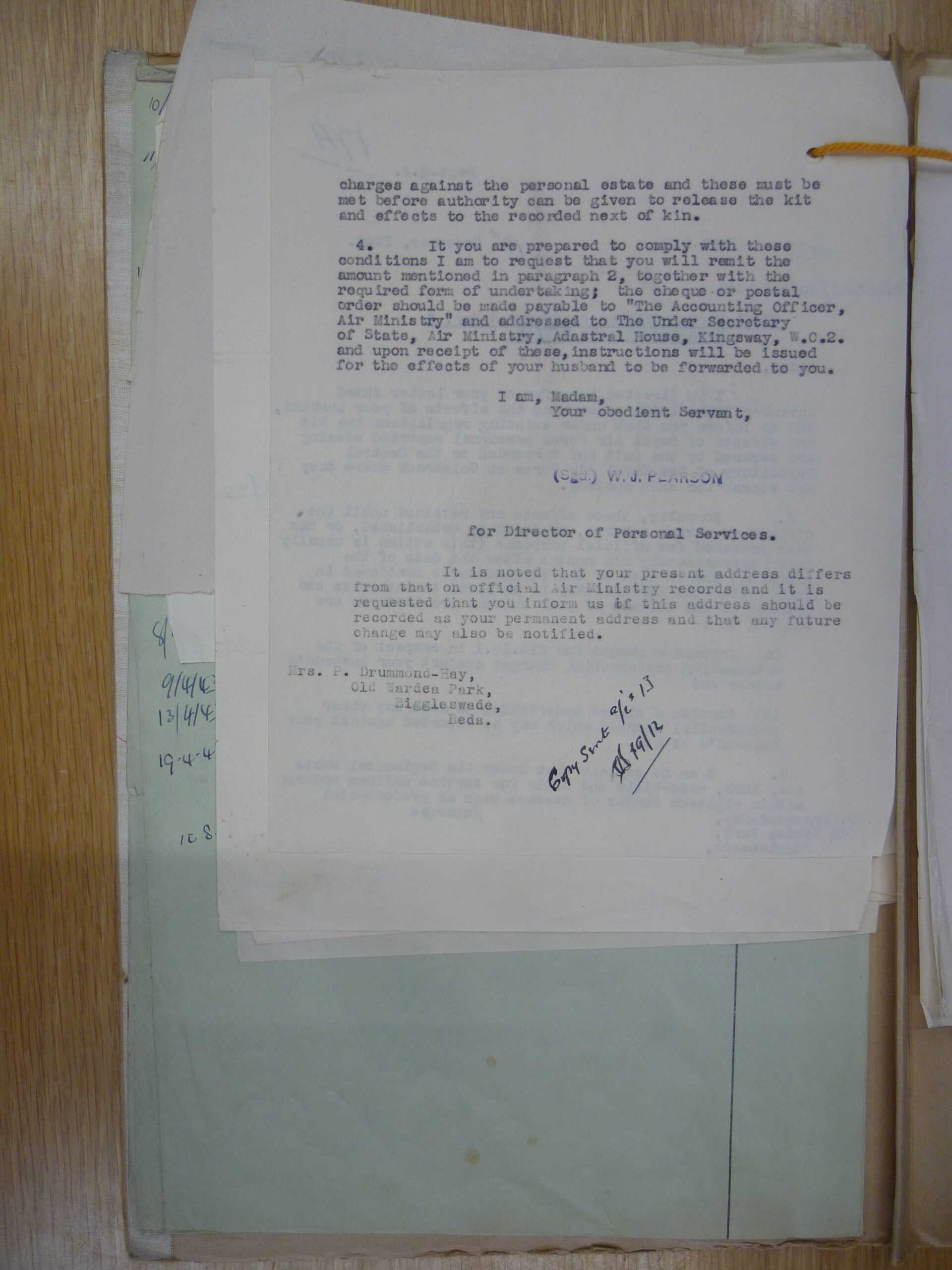 With reference to the letter from this department dated 11th July, 1940, I am directed to inform you with deep regret that all efforts to trace your husband, Flying Officer. P. Drummond—Hay, have proved unavailing. Although formal action to presume death for official purposes will not be taken until a further period has elapsed, it is feared that all hope of finding him alive must be abandoned. 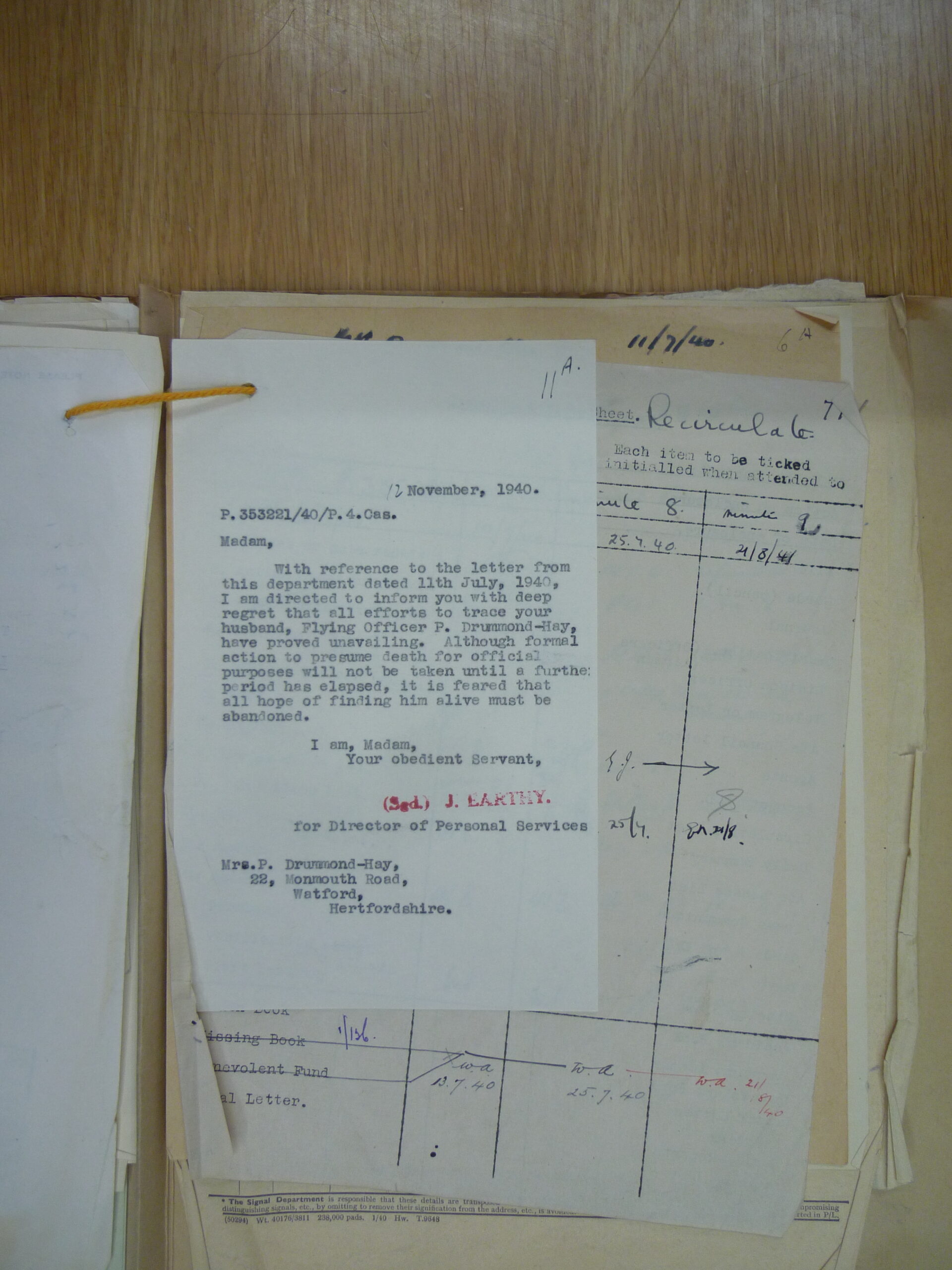 I am commanded by the Air Council to confirm a telegram in which you were notified that your husband, Flying Officer Peter Drumnond-Hay, Royal Air Force, is missing as the result of air operations on the 9th of July, 1940.

I am to explain that this does not necessarily mean that he is killed wounded and that if he is a prisoner of war he should he able to communicate with you in due course. Meanwhile enquiries will be made by the Air Ministry through the International Red Cross Society. As soon as any definite news is received, you will be immediately informed.

In the event of any information regarding your husband being received by you from any source it would be appreciated if you would kindly communicate it immediately to the Air Ministry.

The Air Council desire me to express their sincere sympathy with you in your present anxiety. 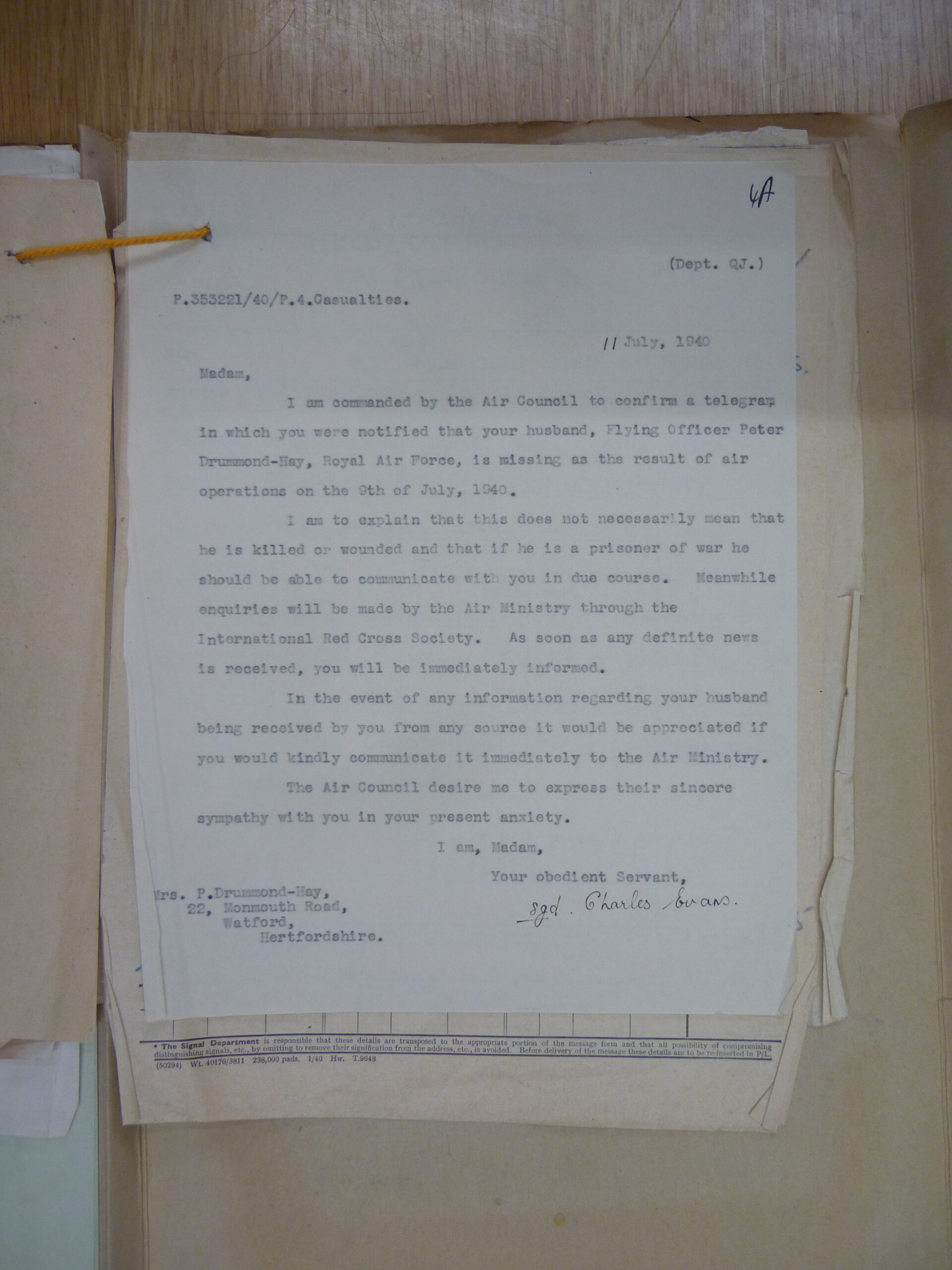 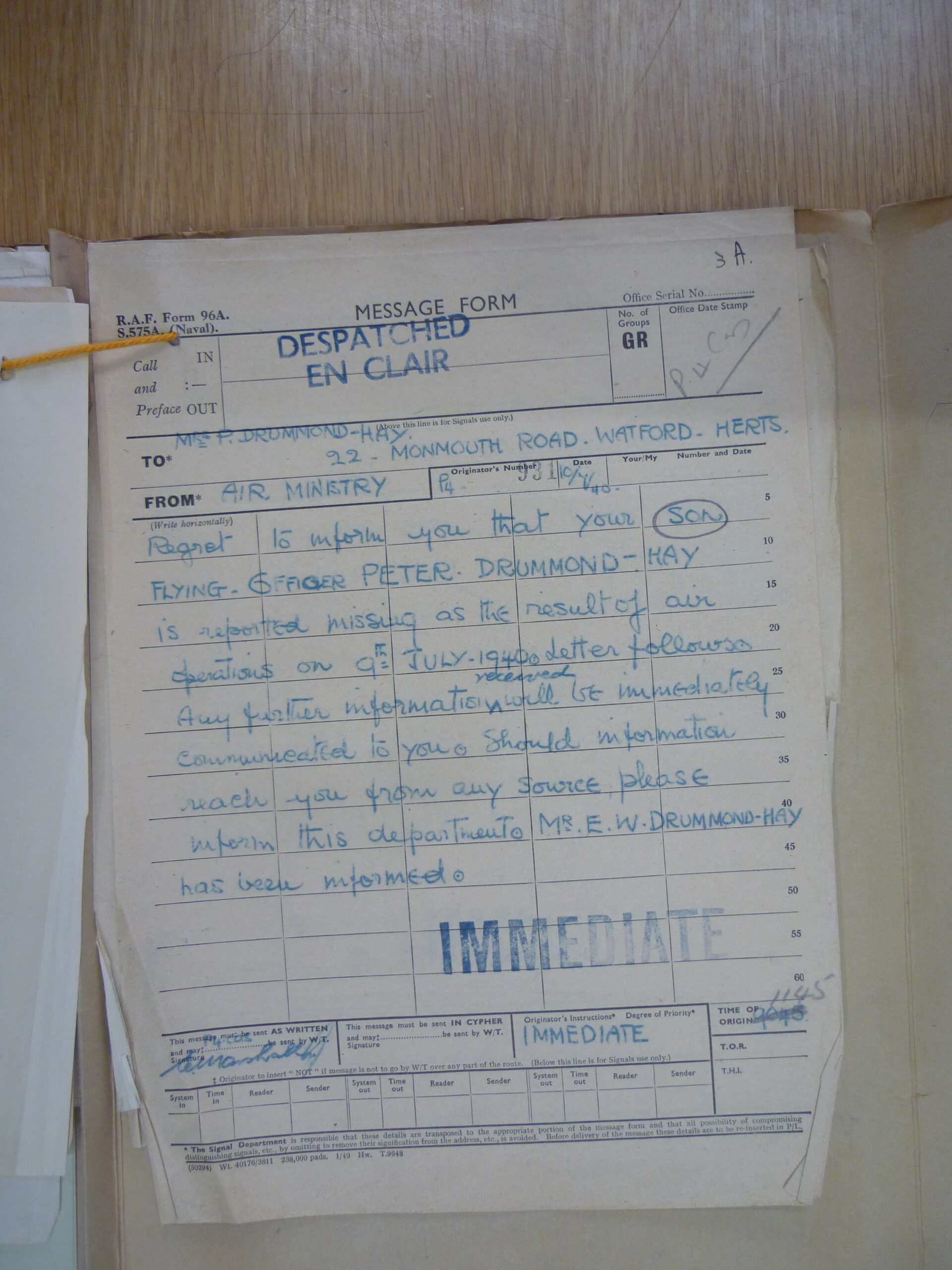 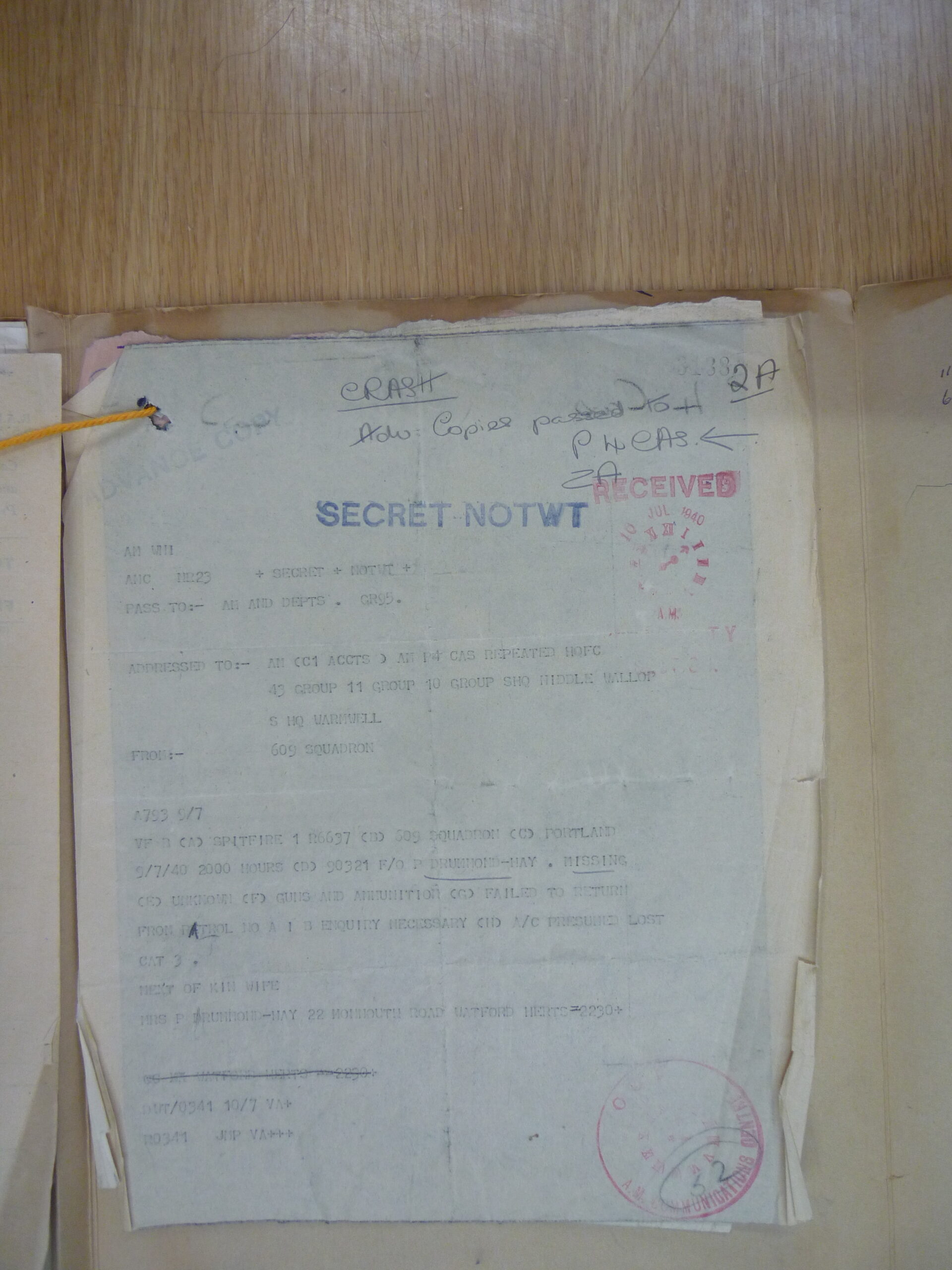