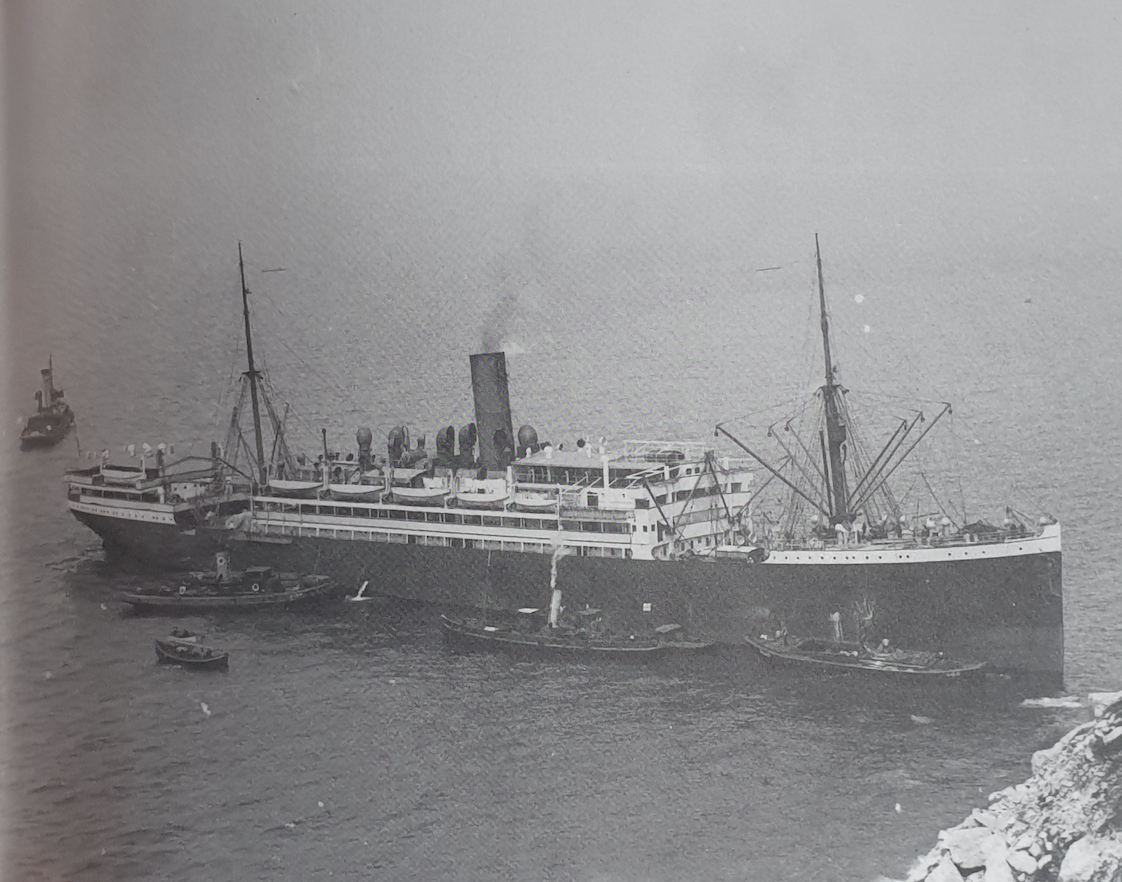 Another Victim to Fog. After the terrible disaster to the EMPRESS OF IRELAND which involved the loss of so many valuable lives, the predicament of a vessel in a fog now appeals to the imagination of everyone. So it was that on Thursday morning, when a thick fog enveloped the island and a large vessel was heard blowing her siren, the people of the island awaited anxiously the lifting of the curtain of mist to see if the steamer had met with any accident. The deep note of the siren throbbed through the still air, telling one and all that the ship was very close in to shore in the West Bay, and more than one fisherman put off in his boat to seek the vessel and warn her of her dangerous proximity.

After a little time the sound of the sirens betokened that the steamer had gone to the southward a little but at about 11.30 a.m. continuous blasts told all within hearing that she had stopped near Blacknor. The coastguard understood the frantic signals first, and hastening to the spot found a large steamer fast ashore in Mutton Cove, between Blacknor and the Bill, in almost the same spot as the PATROCLUS struck seven years ago. The ship proved to be the Norddeutscher-Lloyd BULOW a vessel on her way to Southampton from Yokohama, with some 400 passengers aboard and a crew largely composed of Japanese.

The news was flashed to the harbour, and the tug PETREL (the Channel Coaling Company) set out to give assistance, at once followed by other vessels. The PETREL was the first to arrive on the scene, and, the water still rising, she offered her help. Shortly afterwards Messrs Cosens’ boats appeared, and also the dockyard tugs PILOT and EGERTON, which had been despatched by the Captain-in-Charge (Captain J R. Bridson R. N.) immediately it was known that the BULOW had passengers aboard. All efforts to refloat the ship proved futile, and after some time it was decided to transfer the passengers to the EMPRESS and QUEEN for conveyance to Weymouth, and then by rail to Southampton.

In the meantime the fog had lifted and a rapidly increasing crowd on the cliffs saw all that was going on. They could obtain a splendid view from the cliff edge of the stranded liner below, with her bows resting on the cruel rocks just showing in a sea of glass There was scarcely a ripple on the water, and it seemed impossible that such a splendid boat could have come in so far as to strike the shore, save by one of those unaccountable accidents which befall even best shipmasters at times.

As is the case of the PATROCLUS and also of the MYRTLEDENE, whose remains lie close at hand, it is assumed that the captain of the BULOW, on finding himself out of his course in the fog, had tried to make for the open channel again, and had confused Blacknor Point with the Bill, turning in to come clear of the race and piling his ship up on the rocks at Flew’s Gangway or Pier, one of the few spots where it is possible to descend the cliffs by a well defined path.

Arrival of the Shipwrecked Passengers at Weymouth. – The arrival of the passengers of the BULOW at Weymouth Pier was awaited by a large crowd at the pier entrance, as by this time the news had spread like wildfire through the town that they were being brought off by Messrs Cosens and Co’s steamer, QUEEN. Capt. H. W. Hemmings (Lloyds’ agent) and Mr. M. C. Frowde (joint manager and secretary of Cosens and Co.), were on board and the latter superintended the landing arrangements. Post office officials wore also in attendance with batches of telegrams for those on board and ready to transmit messages from them to their anxious relatives and friends with the utmost despatch. The passengers, 240 in number, gave anything but the impression that they had been shipwrecked. They were talking gaily of their experiences and many of them gleefully narrated them to Press representatives in the Customs House.

The passengers generally testified to the extreme caution showed by the captain in proceeding very warily through the impenetrable bank of fog. That a certain amount of apprehension was felt on board was but natural in view of the fact that it was fog – perhaps the most dreaded enemy of those who go down to the sea in ships – which was primarily responsible for the appalling disaster in the Gulf of St. Lawrence. But curiously enough, after the BULOW had grounded, and the lifting fog showed the passengers their whereabouts there was a sense of relief felt almost throughout the ship, and the assurance was given by the captain that the damage was comparatively slight. But the BULOW had her nose well into the rock and sand, and it simply meant waiting patiently for one of the larger tugs from Weymouth to take the people off. The only thing which distressed them was the anxiety which the news of the accident would be certain to cause to their relatives and friends before it became known that there had been no loss of life, otherwise the trip round the Bill and across Weymouth Bay was rather more in the nature of a pleasure cruise, and the whole party evinced the liveliest interest in the French and British Fleets lying at anchor in the Bay and Roads.

Captain Holyoake, of the steamer EMPRESS, which brought the BULOW people to Weymouth, stated in an interview that he arrived or the scene at 4 o’clock and waited an hour before transferring the passengers. Opinions were conflicting, he said, as to the speed the steamer was going when she struck, but he saw that she was badly holed forward. The passengers were very quiet and they came on board the EMPRESS about 5 o’clock. It took about an hour to get all the people off. One old lady, over 90 years of age, had to be transferred in an invalid chair. Captain Hemmings, Lloyds’ agent, and Mr. Frowde returned in the same boat. The heavy baggage was left behind and taken off afterwards by the tug QUEEN. Thirty of the passengers stayed the night at the Victoria Hotel and journeyed to Plymouth on Friday morning by the 12.20 G.W.R. train. The great majority of the passengers, however, had a special train provided for them, and left for London just after midnight on Thursday.

The liner was towed off into deep water on Friday afternoon. Two Southampton tugs and two government tugs were engaged in the operations, and after a series of attempts the huge steamer glided off the rocks. The fine weather favoured the work of salvage. She was then taken round to Portland under convoy of the tugs, and later left for Southampton.

Times: Friday, June 19, 1914, Issue 40554 – “Bülow, German vessel, is ashore in fog stranded near Portland. Tugs removed the passengers to Weymouth. The North German Lloyd steamer went ashore near Blacknor Point to the west of Portland Bill. The vessel had been beating about the Bay in the fog for some hours, and apparently lost her bearings. In response to wireless messages for help, five tugs from Portland and Weymouth went to her assistance. The Bülow was wedged firmly in the rocks, and her fore compartments were believed to be making water. The tugs stood by for some time, and an attempt was made to get Bülow’s end to the shore but without success. The passengers were transferred quickly and without excitement to one of the Weymouth steamers, which took them to that port.

The passengers left Weymouth by special trains last night for Southampton, London and elsewhere. The Bülow is stated to be only slightly damaged, and the tugs will make an effort to get her off at high water early this morning. Lloyd’s report that the salvage steamer Em. Z. Svitzer proceeded from Dartmouth to the assistance of the Bülow, and that the Government tugs were in attendance. The vessel was understood to be in a favorable position, providing the weather remains fine.” Ship Incident