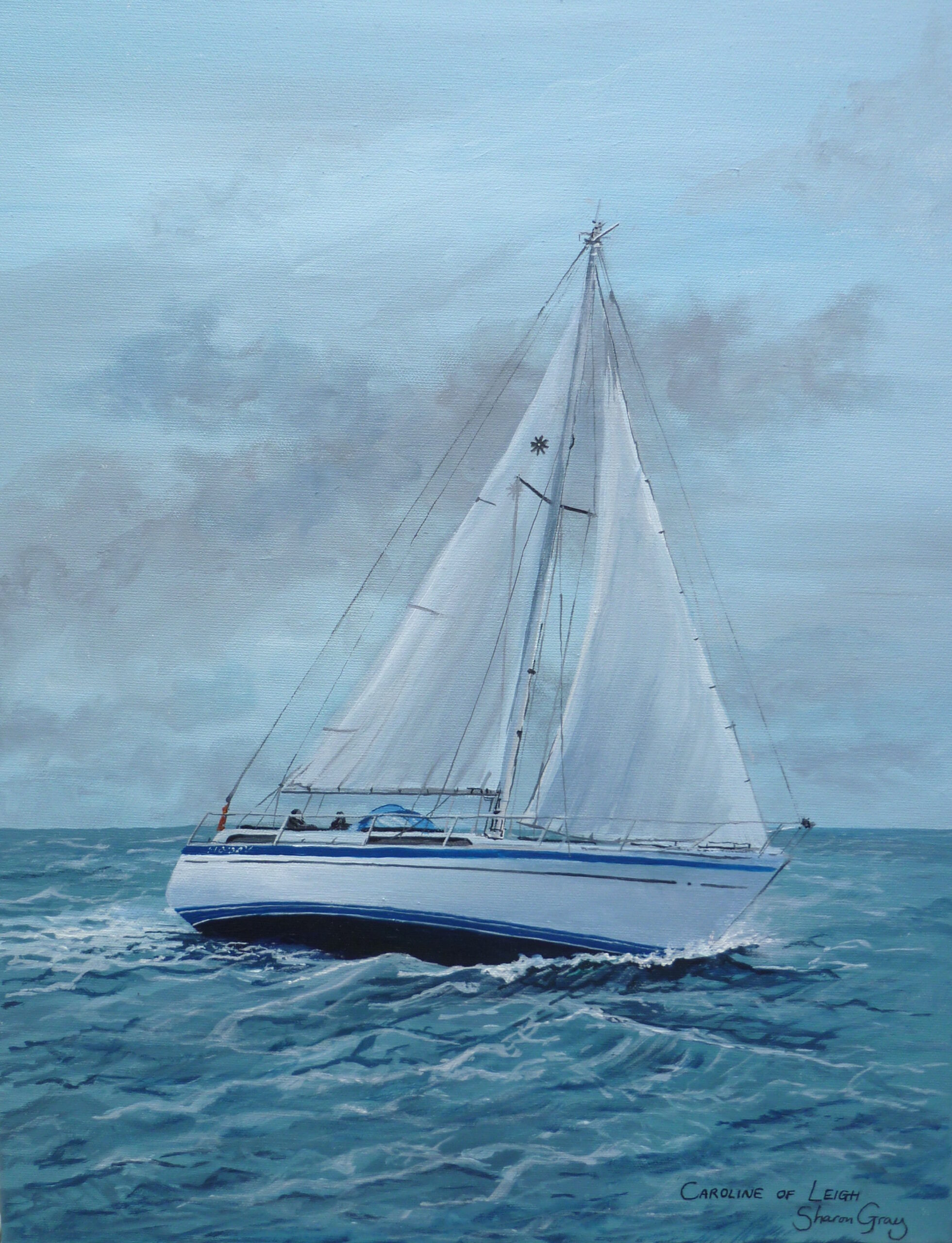 The mysterious demise of the Caroline of Leigh

Yacht – Captain Wilfred Niemann. (LARN) – Off Lulworth Cove. A brand new yacht on its maiden voyage called into Weymouth on 14/12/1979 and departed soon after. Wreckage of the yacht was found in the net of a trawler off Lulworth Cove 07/02/1980. On board had been the 30 year old skipper, Lothar Griep (37), Ursula Buth (27) and the 45 year old English owner. The wreck of the Yacht was found on 01/07/1980 by four amateur divers at a depth of 110 feet, lying on a flat sandy sea bottom, broken in two pieces, but still held together by the stain steel rigging of the deck rails. A Weymouth fisherman David Pitman, trawled up her engine and gearbox complete on 10/07/1980. Diver 01/1981 Vol. 26 No. 1. Local research would suggest that there was a report of a red flare but the Weymouth Lifeboat was not launched. Two bodies were found soon after the incident and the third much later. Experienced locals are convinced the yacht was hit by a submarine. Obviously there is absolutely no proof whatsoever, but it is more than likely that it sank very quickly.

The mystery first became known when a storm jacket was found on a remote Dorset beach. That was on December 18, 1979. A coroner, police and four divers have, since then, pieced evidence together like a jigsaw. But the final piece is missing – why should a £35 000 luxury yacht lie split in two on the seabed?

The jacket was found to contain personal documents of a German national – Lothar Griep. Police enquiries revealed that he had entered the country a few days earlier as one of a crew who were to take a yacht, Caroline of Leigh, on her maiden voyage to Greece for use in the following year’s charter season.

The yacht was a Moody 36, an 11m craft with the hull and super-structure in glass reinforced plastic. It had seven berths with three cabins, each luxuriously fitted out. On board as well as Lothar Griep, were the yacht’s English owner, Patrick Godfrey, his professional Niemann, and a German nurse, Ursula Buths.

The yacht left Weymouth, Dorset on December 14 bound for Bordeaux in German skipper, Wilfried France. She was not seen again until her remains were discovered on May 24, 1980.

December 14 was a wild day even by winter standards with force 10 winds. Gales and torrential rain swept the country. Why Patrick and his skipper Godfrey decided to sail on that day, after hearing the forecast, will never be known.

Nothing further was heard of boat and crew until, over a period of months, the bodies of the three men and some lifejackets were washed up. The body of Miss Buths was never found.

While information was being pieced together, the coroner, at an inquest into the death of the men heard from the police that a small control panel identified as having been fitted to the Caroline of Leigh had been found in the net of a trawler operating off Lulworth. He said he was “as satisfied as I can be that the Caroline of Leigh has foundered and the hull is off the Dorset coast approximately three miles south of Lulworth Cove”.

Four divers, Richard Farwell, of Dorset Sub-Aqua Club Dave Mountjoy Neil Rowley and myself, all of Weymouth and Portland BS-AC, decided to search for the missing vessel.

We were fortunate that a local electronic manufacturer Waverley Electronics, with whom most of our small group are employed, made available to us the company boat Sea Searcher, an 11m research and survey vessel. She was equipped with a Waverley-made side scan sonar.

The side-scan system can search large areas up to 600m wide in one sweep, giving a print-out “picture” of the sea bed directly below. A grid was established around the marks given by the fisherman who had found the control panel in his net.

We then started a systematic search. During February to early May, 1980, many uncomfortable hours were spent tabulating positions and noting any seabed anomalies. But appalling under water visibility and conditions prevented diving.

Towards the end of May conditions improved and many anomalies were checked. Most turned out to be rocky outcrops or ledges. There was no sign of the yacht.

We were diving in 30 to 33m of water with visibility down to one metre even with a torch. It was an eerie feeling, never knowing what might be found, and always in the back of your mind was the thought that if the wreck was discovered the missing body might still be found on board.

Usually we made a quick circular search using a shot and stay-line and returned to the surface. As the number of anomalies investigated increased, hopes were fading.

One evening we were talking to Brian Randall, a local fisherman and diving skipper – I’m sure many have dived from his boat Sea Raider. He had a set of marks on an obstruction found when trawling, and this related closely to an anomaly shown up on the side-scan print-out. We decided to have a look. So on June 4, again in Sea Searcher, we dropped the shot into 33m of water and I dived with Dave.

Sticking up out of the sand was a small aluminium-and-plastic tray. When described later to the company that marketed the missing yacht, it was said to be a toothbrush holder, the same as fitted to their Moody 36. An examination of the echo-sounder trace next day revealed two distinct contacts!

The weather prevented our return to the site until June 24. We decided to carry out a side-scan search of the area. This time the wind was Westerly Force 3-4, and conditions were a little lumpy. The side-scan showed only a small shadow-no definite reading.

We put this down to its being slack water with very little turbulence around the object to provide a good acoustic reflection, on which the side-scan operates. We resorted to an echo-sounder search over the area. Mostly by luck we made immediate contact and dropped the shot.

Richard and Neil dived first. As they descended they noted the visibility had improved, since the last dive. And at 30m their powerful quartz lights revealed a white hull. They connected a line from the shot to the wreck, then swam to the stern to seek identification. The name Caroline of Leigh was clearly visible in blue letters.

The divers surfaced, collected under water ciné-camera and lights, and dived again to film the wreck. I dived with Dave to take black-and-white still photographs and survey and search the wreckage.

The hull had suffered severe structural damage and was split completely in two. Part of the centre cockpit and half the saloon area complete with the keel and hull section below the stern were missing. As proof of our find (just in case our filming was unsuccessful) the auxiliary motor instrument panel, with the ignition keys still in place, was removed and recovered.

We told no one of our discovery while anxiously awaiting developing and printing of the films. The relief was evident among us all on first viewing. We now had photographic evidence of the fate of the Caroline.

The photographs and films were shown to the coroner before the story of our find was “broken” by the Daily Mail on July 2, with a follow-up in our local paper. The quality of the ciné film was excellent, and it was shown on Westward TV that evening. Dave and myself were interviewed by TV for the evening news. It was quite an exciting day. But the story was not to end there.

Shortly afterwards a report in the Bournemouth Echo told of a clairvoyant who believed she knew where in the wrecked yacht were vital documents, which could help the family of the drowned owner clear up financial problems left in the wake of the disaster. She “saw” a briefcase in a locked cupboard in the upturned bow of the boat.

Then a Thorneycroft marine engine believed to be from the Caroline was trawled up about half a mile away from the main wreck, this was taken into police possession. We returned to the wreck to carry out a search on behalf of the coroner. His principal concern was the possibility of recovering the body of Ursula Buths.

To make most use of the slack-water periods, and in view of the amount of work the initial team of four divers was increased to seven, with Jon and Barbara Ayling an Graham Blake joining us. Each of us had 20 minutes’ time on the bottom.

Despite accurate marks, it took more than 30 minutes to relocate the wreck. The underwater visibility on this occasion was in excess of 12m-fantastic!

Two half-ton capacity lifting-bags were attached to the hatch opening on the aft cabin. These were inflated by air bottles.

A line was then taken back to the boat which then “snatched” at the wreck to break the suction effect of the sand. The aft section was raised at an angle of about 75 degrees enabling a search to be made. It was then lowered back to the seabed.

On the next slack tide we intended to perform the same operation with the bow, but more difficulty was experienced finding a firm securing for the lifting-bags. although they were fastened eventually to some of the bare frame members exposed through the bottom of the hull. Again two bags were inflated and the boat was used to free the wreck from the sand. But the sharp edges of the fibreglass cut through one of the bag’s retaining straps-and it shot to the surface like a rocket. We were all sharply reminded of the extremely powerful forces we were working with.

A small cupboard beneath a washbasin was reached only by removal of a cabin door. This supported the clairvoyant’s mental picture of a cupboard. But it was empty. During the whole of these operations we were watched by a huge conger eel, two metres long, which swam freely in the wreckage, guardian of the mystery.

Here it seems the saga ends. The tragic yacht will keep its secret. With its partial lifting, and the discovery of its engine revealing no new clues to the reason for the vessel’s fate, the coroner, while regarding the situation as unsatisfactory, has been forced to close the file.

…. But have we? Keep watching for updates as Deeper Dorset don’t think this is quite the full story of the demise of the Caroline of Leigh. 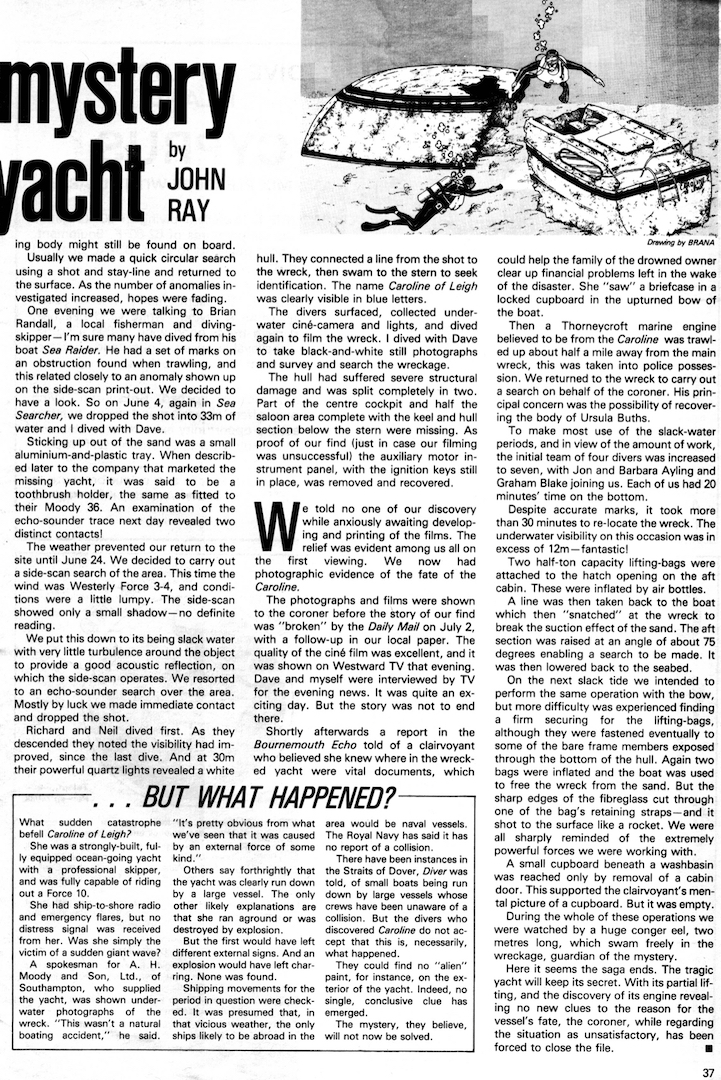