REPORT OF AN INTERVIEW WITH MR. J. D. HOLM

CHIEF OFFICER OF THE S.S. DEUCALION

We were bound from London to St. John Newfoundland in ballast. We had wireless on board and were flying the ensign at the time of the attack. We were unarmed. All confidential books went down with the ship. The number of the crew including the master was 27, two of which were injured.

We left London on June 28th and called at Gravesend where we stayed for one day adjusting our compasses. We then went on to Southend where we waited until the 2nd July on which date we went ashore for the conference. On the following morning, the 3rd July, at 8 a.m. we started our engines and joined the convoy which consisted of 50 snips, but later on we were joined by another 20 vessels, making the total in the convoy 70. When we were passing the South Foreland, we heard an attack over the land, and we remarked then that perhaps it would be our turn tomorrow.

At 12.45 on the 4th July, when we were about 20 miles south of Portland Bill we were attacked by enemy planes. The Captain and I with several other officers were sitting down to dinner at the time. The 2nd. Officer was on the bridge and he sent down a message to the Captain saying that enemy aircraft were approaching. The Captain ran up to the bridge immediately, and just then the enemy started to attack. They attacked from a height of about 1000 ft, and dropped quite a number of bombs. Every one missed but there were about 5 or 6 which fell quite close but caused no damage to the ship.

The planes then started bombing a tanker and the ANTONIO which was ahead of us. They made a direct hit on the tanker; we saw a lot of smoke, and she sank almost immediately. I think there were about 6, 7 or maybe 8 vessels damaged in this first attack. No. 13 in the convoy was badly damaged and fell out immediately, then No. 14 fell out, and then about 10 minutes afterwards No. 12 also dropped out 0f the convoy. This left a very big opening between my vessel and No. 11 so we increased our speed to close the gap.

At about 2.30 p.m. on the same day I was on the bridge with the Captain when I saw some planes approaching. I told the Captain who remarked that he thought they must be British… 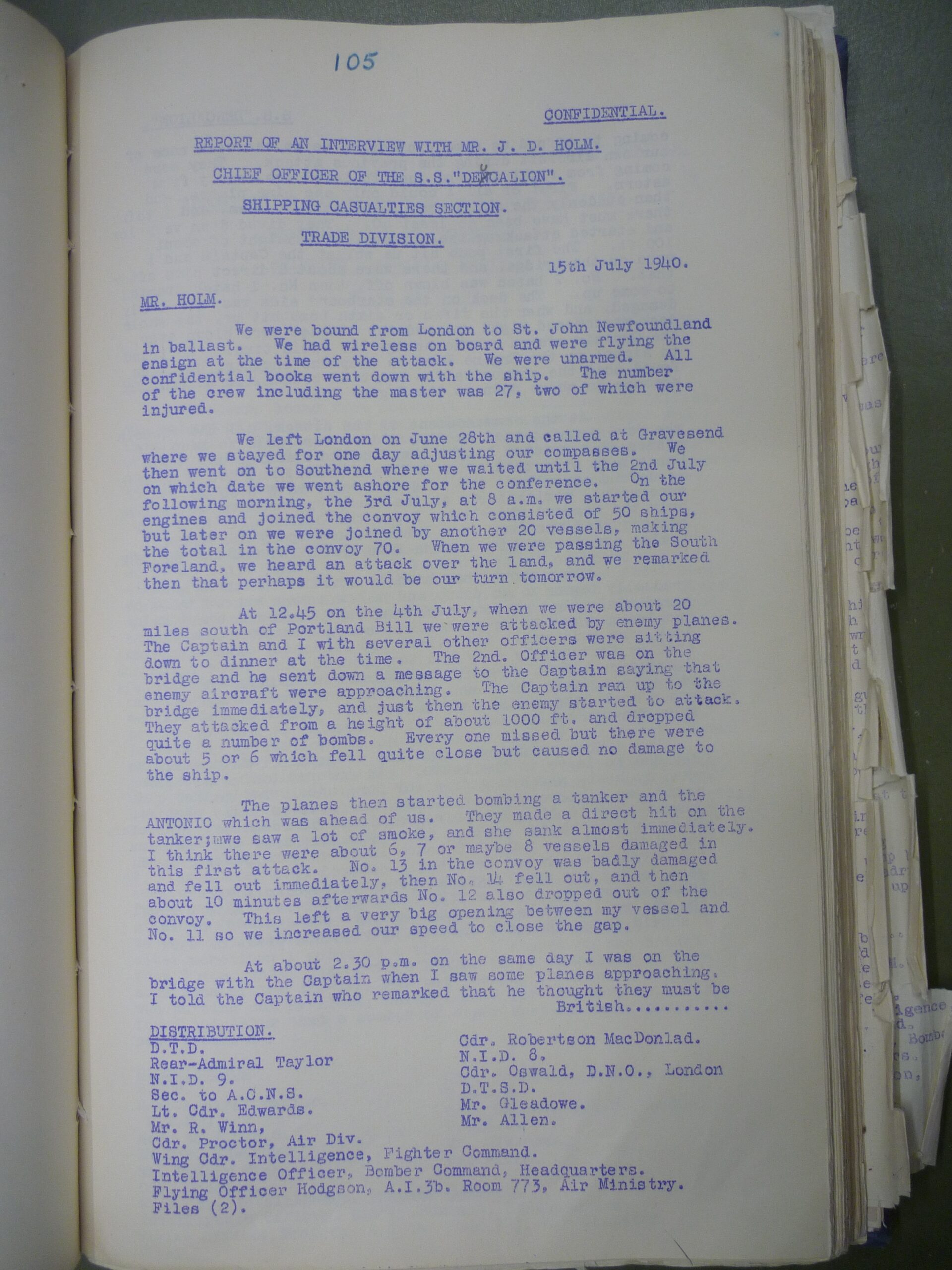 coning to afford us some protection as we had seen none of our own aircraft during the previous attack. They were coming from right aft and just followed the convoy from astern. First of all I could only see nine planes, and than suddenly the sky seemed to be full of them, and I think there must have been at least 40. They dived down and started attacking the convoy from a height of about 100 ft.  The first bomb hit us whilst the Captain and I were on the bridge, and there were about 8 direct hits after that. No. 2 hatch was blown off, then No. 1 hatch started to come up. The deck on the starboard side was very badly damaged, and when the fifth or sixth bomb hit us he whole deck was opened right up, and the winches were blown away. The Captain stayed on the bridge the whole time. He tried to signal to the engine room to stop the engines, bus then found that the communication had been broken, so he sent someone to shout down to the Engine Room.

At the commencement of the attack, all the vessels who were armed opened up fire and so were able to keep he planes at a greater height than those attacking us. The Captain is sure that if we had been armed, and had been able to defend ourselves the raid would not have been so successful, particularly as the enemy appeared to be seeking only the unarmed vessels. I saw the DALLAS CITY hit and believe that the crew were later picked up by the ANTONIO. I also saw direct hits on the KING FREDERICK and the BRITSUM.

After about the third or fourth hit the ship gradually began to go down, and all the crew wanted to leave immediately, but as with each bombing attack the enemy were machine-gunning us we persuaded them all to take cover on deck and wait until the attack had finished, with the result that we fortunately only had two injured, the Captain and the Carpenter. Both were hit by bullets which made a small hole on entering into the flesh and where the bullet left there was a much larger hole, which seemed to indicate that they were dum-dun bullets.

When we thought that the attackers had finished we decided to leave in the boats. We lowered both boats and when my boat, which was from the port side, was in the water, we discovered that it had been been so badly machine gunned that it filled with water almost immediately. However we used both boats, getting 13 of the crew into one boat and 14 in the other. About 2 hours later we were picked up by the ANTONIO which had been badly damaged by a near miss. We were landed the same night at Portland and the next day were taken by trawler to Weymouth. The last we saw of my vessel she was well down by the head, and her decks almost awash. I should think she sank about 2 hours afterwards. 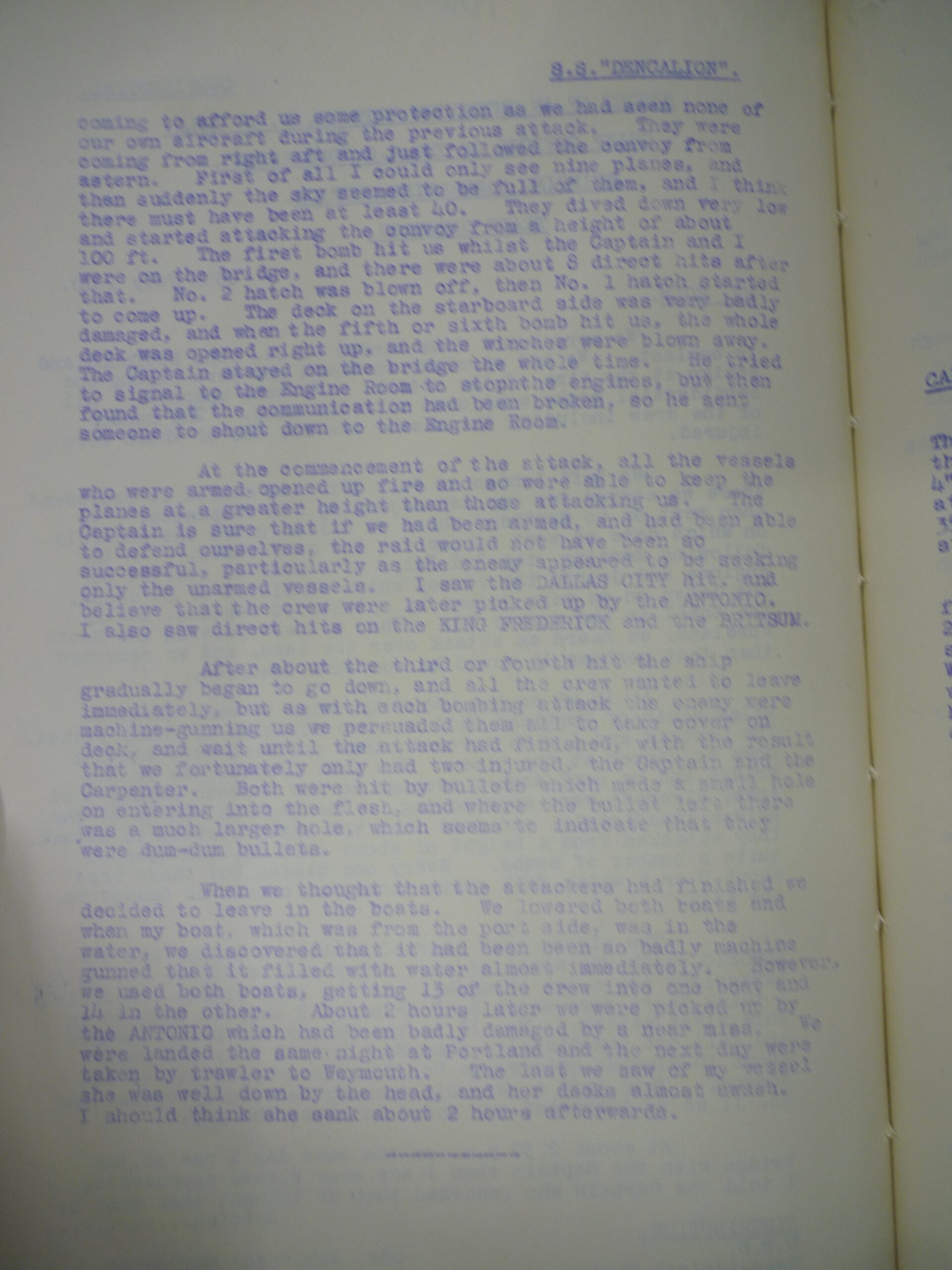 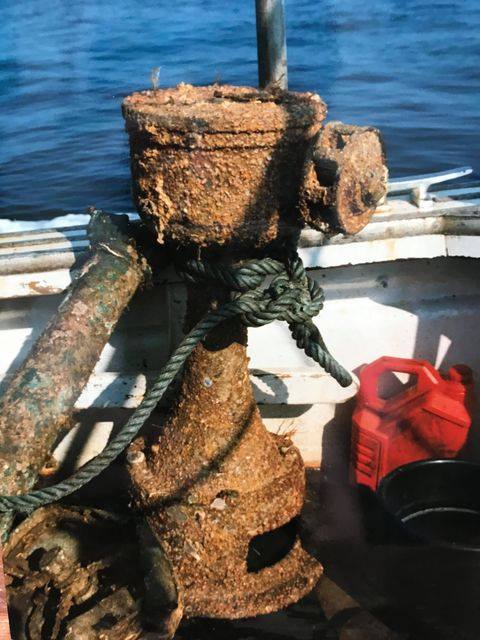 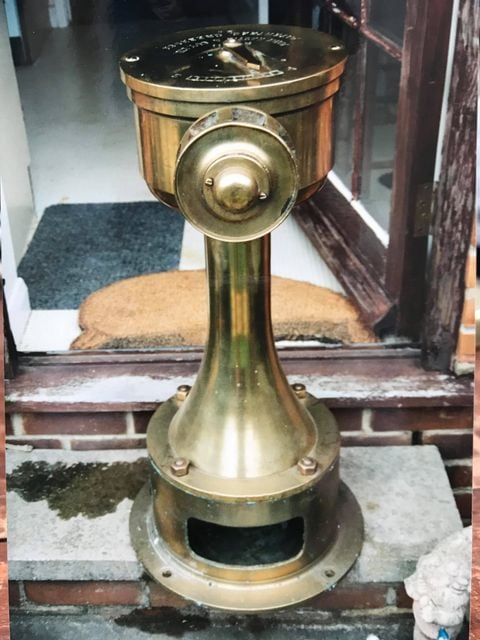 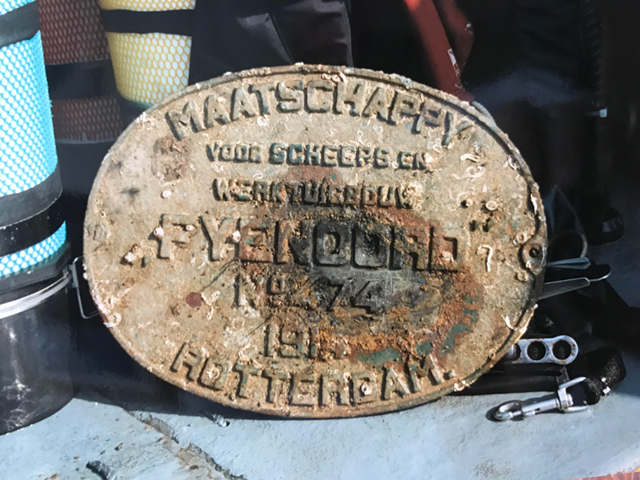 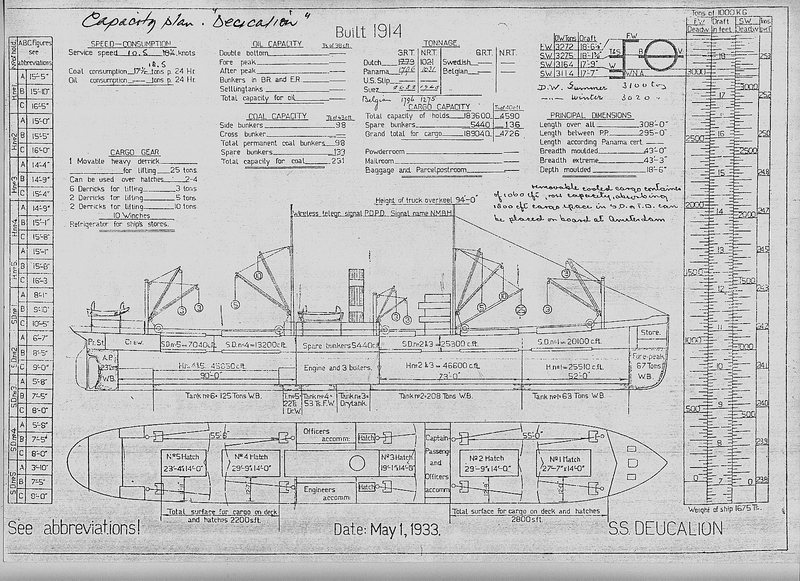