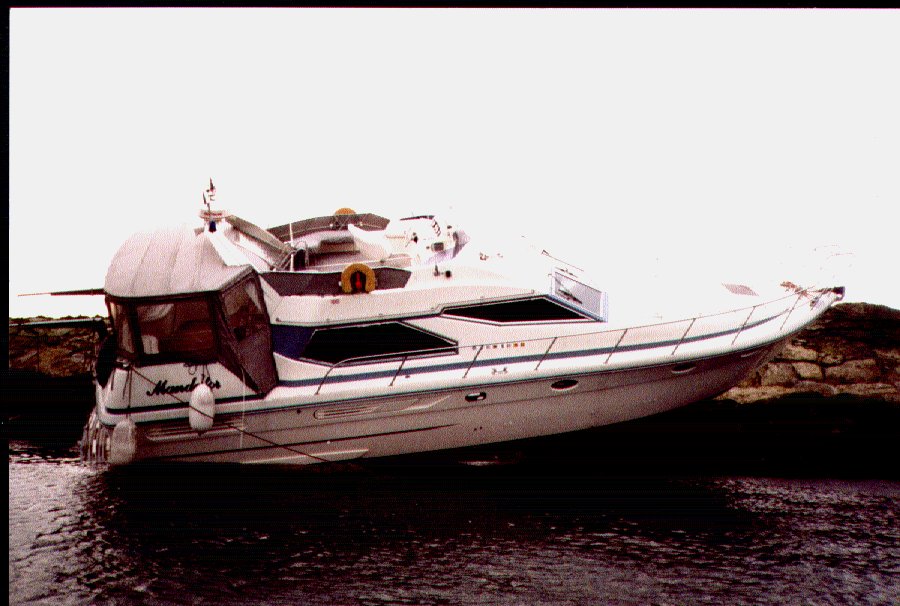 Pleasure Boat MANDATOR returning from France hits the Portland Breakwater at speed. The craft was salvaged.

A group of local Weymouth businessmen returning from France set the Auto Pilot and GPS to return to Weymouth. They apparently set the course without taking account of the position of the Portland Harbour wall. On approaching Weymouth there was no one at the helm and they hit the wall at speed!! Fortunately no body was very badly hurt, but you can imagine the bottom of the craft was very badly damaged. A 24/7 watch was kept on Mandator until salvage was undertaken.

Later Rodney Shipley was fined for not keeping a lookout and having out of date flares. There is strangely very little in the local press.

“The owner of a motor cruiser has been prosecuted in Weymouth after his vessel struck the Portland breakwater. Mr Rodney Shipley was fined £1500 for failing to keep a proper lookout and £1000 for offences relating to out of date pyrotechnics and other safety equipment infringements. Mr Shipley’s 50 foot motor yacht ‘Mandator’ struck the breakwater at high speed on the evening of October 28 2001 injuring one passenger and severely damaging the vessel. The three people aboard were rescued by the Weymouth Lifeboat.

A spokesman from the Southampton Marine Office said: “Mr Shipley endangered himself and his passengers both by passing so close to the breakwater at speed and in the dark without keeping a proper lookout, and by failing to ensure that vital safety equipment was in good order. Fortunately the prompt response of the RNLI meant that (he) did not need to call upon this equipment after the accident.”