Times: Tuesday, September 27, 1910, Issue 39388 – “Captain Bogle, of the Indian Army, and his sister, Miss Bogle, the son and daughter of Colonel Bogle, R. E. and Mrs. Bogle, of Weymouth, were drowned off Weymouth yesterday. In a squall in Weymouth Bay the boat in which they were sailing (WAVE) capsized. Captain Bogle made a gallant attempt to save his sister, but failed and both were drowned. The bodies had not been recovered last night.”

Times: Thursday, September 29, 1910, Issue 393390 – The inquest on the body of Miss Ethel May Bogle, daughter of Lieutenant Colonel Bogle, late of the Royal Engineers, who with her brother, Lieutenant Bogle, of the 40th Pathans, was drowned owing to the capsizing of a sailing boat in Weymouth Bay on Monday was held in the Guildhall, Weymouth, yesterday, before Mr. G. P. Symes.

Major Adam Bogle, late of the Royal Engineers, having identified the body as that of his niece, Frederick Damer, a licensed boatman, gave evidence that he let out the sailing boat Wave to Lieutenant Bogle and his sister. He knew that they had previously been out sailing, and Lieutenant Bogle said he could manage the boat himself. As a fresh wind was blowing, the witness took a couple of reefs in the sail and told the officer he could shake out one if he desired. The lady took the tiller and her brother held the sheet in his hand. They sail out into the bay. The witness noticed that when a steamer from Jersey came in the sailing boat jumped about in the wash of the vessel. Immediately after he missed the boat he examined through his telescope the spot where he had last observed it, but could see nobody in the water. Russell Tanner, a visitor from Beckington, stated he was sailing with a boatman named Cooke when the accident happened. When the boat capsized they both bore down to the spot and saw Lieutenant Bogle floating, apparently unconscious. They could see nothing of his sister. James Cooke gave corroborative evidence, and added that when he saw the Wave he thought there was too much wind in her. He had no doubt that the accident was due in some measure to the wash of the steamer and the rough sea. Lieutenant Bogle was washed about by the sea for some time and was apparently lifeless. When they were almost within reach of him Lieutenant Bogle sank. A diver named Vallance stated that he found the capsized boat with its nose in the mud, as if it had gone done bow first. The ballast had been shifted by the heavy sea. The main sheet was tied. The jury returned a verdict of ‘Accidently Drowned’. The search for the body of Lieutenant Bogle, for the recovery of which a reward has been offered, has been unsuccessful.”

Issue 39391 – The body of Lieutenant A. H. Bogle, who with his sister was drowned by the upsetting of a sailing boat in Weymouth Bay on Monday, was recovered yesterday morning and an inquest was held in the afternoon. The jury returned a verdict of ‘Accidently Drowned’. At the close of the enquiry the jury suggested that representations should be made to the authorities with a view to visitors, when boating, be warned against the approach of the Channel Island Steamers. Colonel Bogle, the father who agreed with the theory that some of the ballast of the boat had shifted, was of the opinion that it was probable the boat was swamped by the wash from the Jersey steamer. He had personally witnessed the effect of the wash from such steamers. The Coroner said he would write to the Licensing Committee of the Corporation and call their attention to the matter. The funeral of Miss Bogle took place at Radipole yesterday. The mourners were Colonel and Mrs. Bogle, Mr. and Mrs. Woolff, Mrs. Davis, Miss Savile, Mr. B. B. Savile, and Major Bogle (Uncle). The service was conducted by the Rev. T. Lancaster and Rev. B. C. Pownall. Lieutenant Bogle will be buried at Exeter to-day. 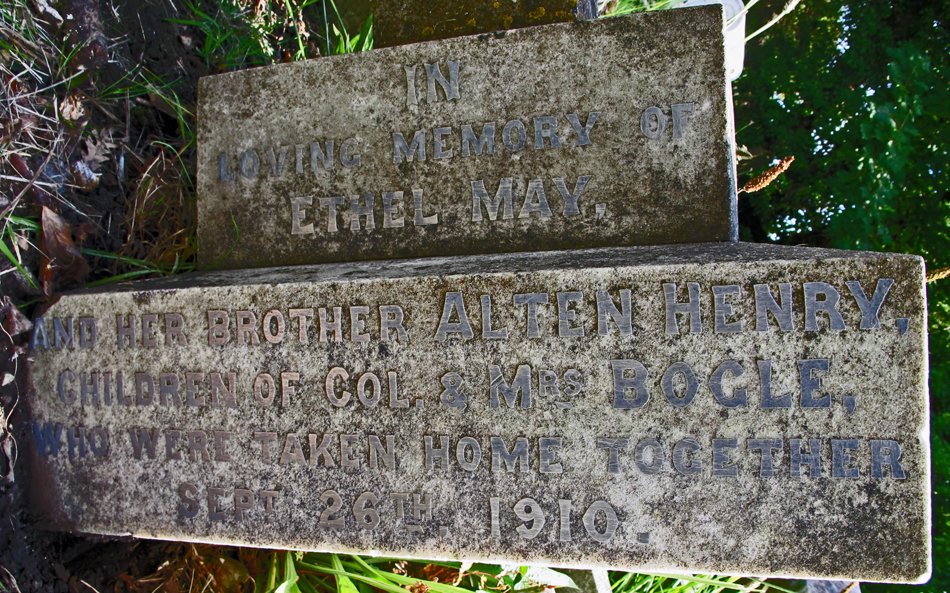 The Grave has been located at St Ann, Radipole as is located behind the Old School House on the other side of the road to the Church. As you face the School House there is a gate, in the wall on the right. Follow the bend in the path until there is a right angled bend in front of a very large, well kept grave on your right. The Bogle grave is the second one in on the left side of the path, on the corner. As of September 2011 the marble cross is over on its side and at first it was assumed that it had been vandalized. It was however laid over because it was in the danger of falling over. Memorials are to: Ethel May Bogle; Alten Henry Bogle; and John Du Terview Bogle, the father. Only Ethel and John are buried here. Alten & Ethel, Age 22, 26/09/1910. The father, age 72, was buried 19/06/1917. According to the records the mother, aged 87, was buried in 1932 close by, but the grave has not been located as yet.

Alten is recorded in the London Gazette (5th October, 1906) as; Unattached List, Gentleman Cadet, 19th August 1903 from the Royal Military College waiting appointment to the Indian Army. On the 22nd December, 1904 as Second Lieutenant, & on the 19th November 1905 he was a Lieutenant in the 40th Pathams.