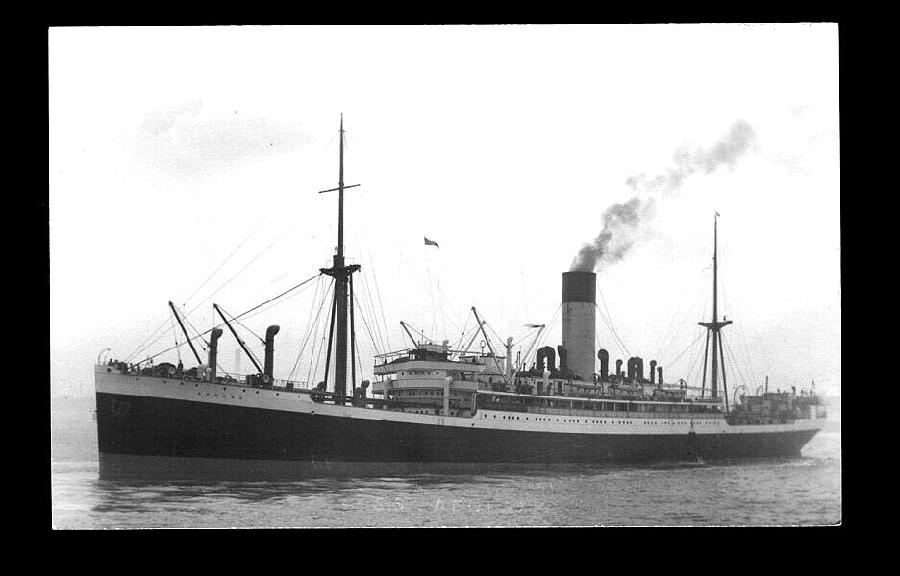 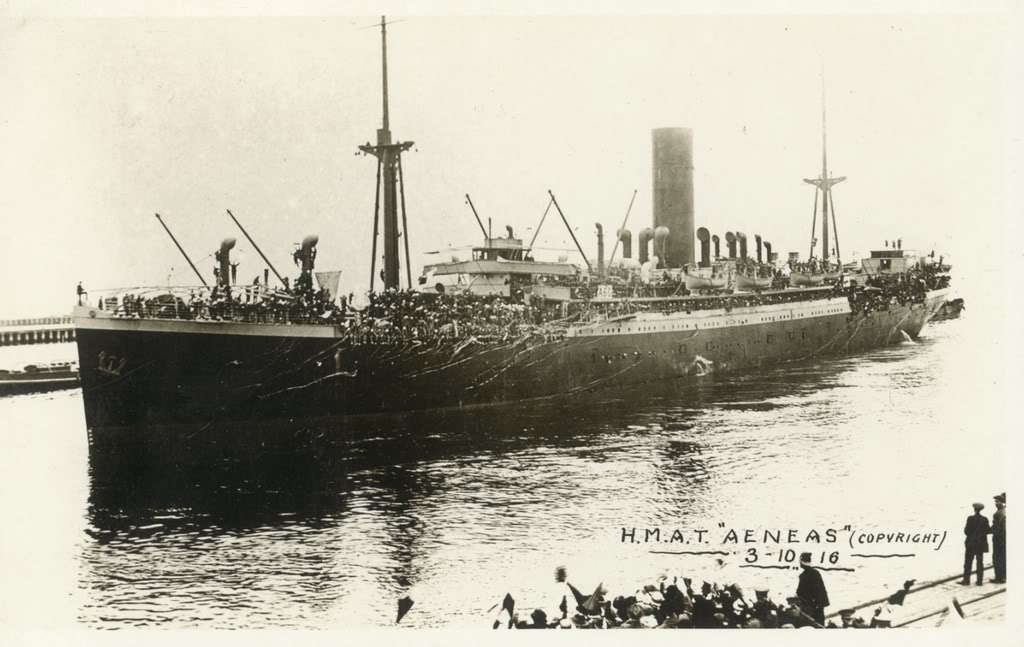 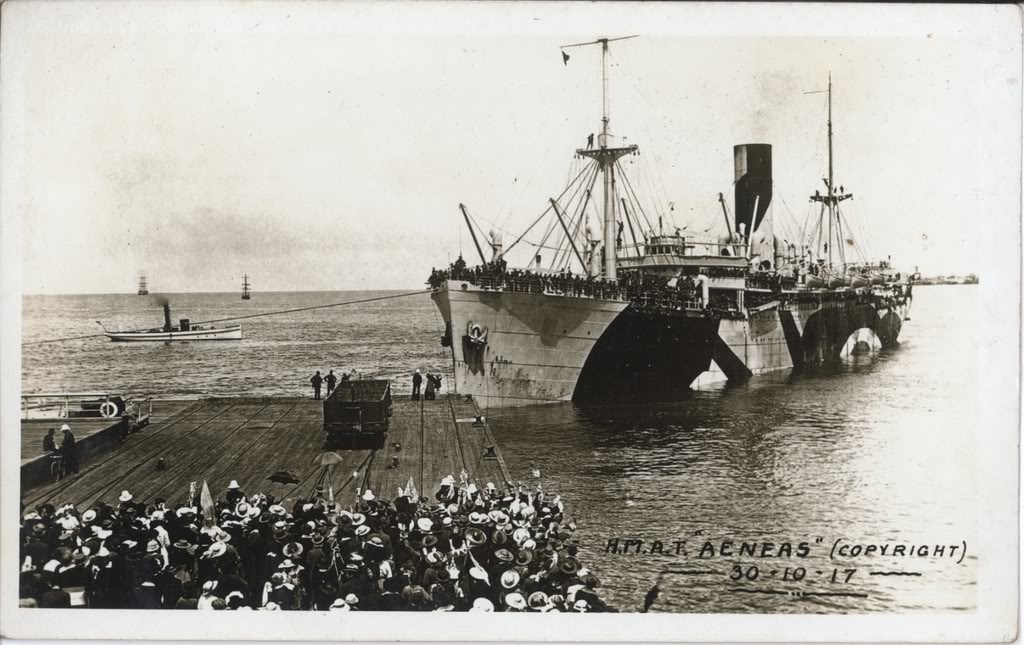 REPORT OF AN NTERVIEW WITH CAPTATN DAVID L EVANS

MASTER OF THE S.S. AENEAS

We were bound from London to Glasgow with a general cargo of 5000 tons. The colour of our hull. was black superstructure and funnel grey. We were armed with a 4.7″, 12 pdr. and a Lewis gun. We had wireless on board. We were flying he ensign at the time of the attack. The confidential books were put 1nto a weighted bag and thrown overboard. The number of the crew, including myself, was 109, and we also had aboard Vice Commodore (Capt. Roberts), 3 ratings and one Lewis gunner. There are 18 of this crew missing, 3 killed and about 9 injured seriously. The ship was degaussed.

We left Southampton at 6 a.m. on the 2nd July and trave1led without incident as far as Dungeness. Soon after We sighted some M.T.S. travelling at full speed. They were engaged but arterwards found to be friendly.

We were travelling at 7 knots, and carrying out No. 10 zig-zag throughout the night; we had the blue signal several times during which we kept the gun crew at their stations in readiness. At about 7 a.m. when we were about 20 miles S.E. 0f the start, we got another blue signal. We were already on the alert, and at about 7:50 a.m. I saw a plane at a great height. My orders when leaving Southend were to fire at all planes up to 2 W; I took these orders very seriously and would most certainly have fired, but the Vice Commodore advised me not to do so as the plane might have been British. If he hadn’t been there I shouldn’t have hesitated. The plane came right at us from an approximate height of 30o0 – 4000 ft. and dropped a bomb which fell fairly close to the starboard side, but that attack did not bother us much. I think that this plane had British markings.

Soon afterwards, when the 0fficers and myself were all on the bridge I am quite sure I heard machine-gun fire, but the others say that they heard nothing. Afterwards we learned that the BARON  RUTHVEN had been attacked and five men… 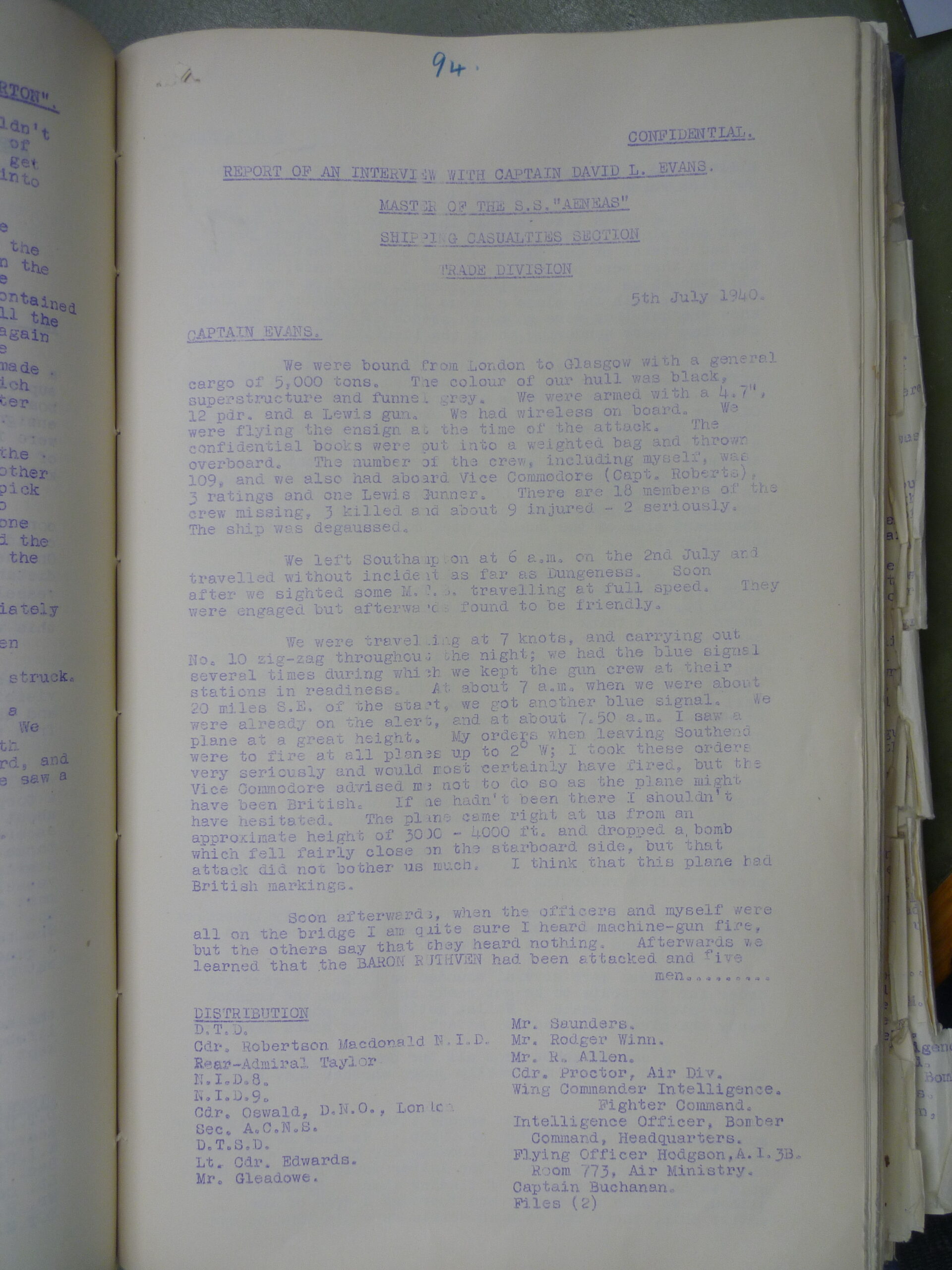 killed, and I assumed that these were the bursts of machine-gun fire which I had heard.

I would like to take this opportunity of saying that our planes bother us much more than the German planes. We had several of our planes flying over us that day, and whether they were practising or not I don’t know, but they all came at us in a semi-dive, z0omed, and flew away again. Naturally, with the plane at some little distance, we didn’t know whether they were going to attack or not, and just standing there wondering about the identity was terrible.

At 1415 I went on the bridge, and I sent one officer away to have a rest as they had all had a fairly bad time. I was over on the starboard side with the 2nd. Officer and at 1430 we heard the drone of a machine fairly high. The weather at the time was beautiful, but there was a slight haze overhead and we couldn’t see him for a few seconds. When he did come into view he was coming straight for us. He then bombed us. It fell fairly close on the starboard side of the quarter deck but missed. There was a big splash.

At 1630 we were again attacked. The attack came from right over head. The plane seemed to start at about 3,000 ft. and dived almost vertically, and from photographs shown to me I think I can a most certainly identify the machine as a Juncker 87. The first bomb dropped ahead of the port side and made a hole about 6″ diameter amidships, but it dropped back into he sea. The explosion shook the vessel considerably and set her on fire. The second bomb fell abaft the funnel. She took a list of about 25 to starboard. He dropped an0ther bomb about 100 yards away on the starboard beam.

We were again attacked at 1700 by a plane which I think only had one engine and no undercarriage. The high angle gunner, who was a marine, said he saw the commencement of this final attack but the bomb, which was dropped almost simultaneously with the outburst of machine-gun fire, and was a near miss on the starboard quarter, shook the poop so badly that he was unable to retain his position and was thus prevented from returning the attack.

I could see now that they were definitely intending to get us so immediately put all confidential books in a weighted bag and threw it overboard.

There were several wounded on deck: I gave the order for the boats to be got ready and we put the wounded the in the starboard b0ats. Whilst getting the port boats ready the plane made another attack, but the bombs missed us.

I saw splashes from all the bombs, but did not see the size, and I could not really judge whether they had a delayed action.

At the time of the second attack the 3rd officer was speaking to the 2nd. Officer Mr. Robb. We knew he should be about somewhere so we started looking for him, and als0 the Chinese crew, but as we knew the latter would be in the stoke hold we had not much hope finding them. However although we made a complete and thorough search of the entire ship, there was so much debris we could find no one. 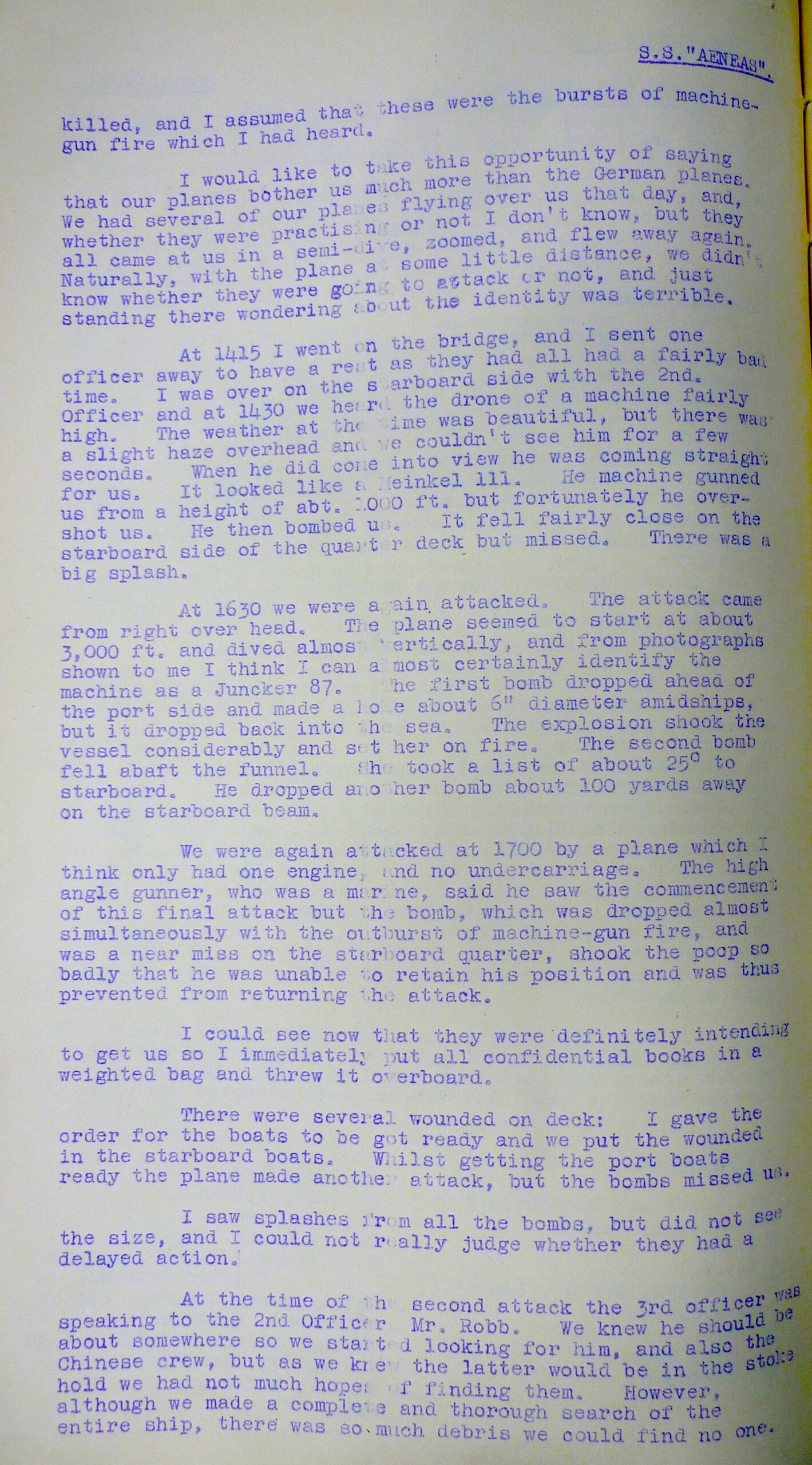 We got the starboard boats away, and when getting the port boats away we heard someone calling from the the bunker hatch – there was an awful lot of smoke – and discovered one of the firemen there. He tied himself to a rope which we lowered and we pulled him up. He was very badly burned.

I was not at all worried about the ship capsizing although she kept g0ing over, but the Vice Commodore said we must abandon the ship. The steam pipe had burst, and, although I realised we could not do anything I did not like leaving the vessel .They were all in the boats end kept calling for me to leave, but I said I was going to have another try to find the missing men. I again went all over the ship, listening mainly for groans, but I could hear nothing at all, and I felt satisfied that there could not possibly be anyone left alive. I then left the ship.

Our escort the WITHERINGTON convoyed the ships a little while before coming back for us, and as the small boat we were in was damaged by the last attack, he picked us up first.  After getting aboard the WITHDRINCTON we saw a man on the AENEAS waving his arms. It turned out to be the steward. The WITHERINGTON sent over a boat to bring him back. The crew had another look around the AENEAS but could find no one else.   The steward said that although he had no 1njuries, some debris must have hit him end made him unconscious for a time. He was in his room when the explosion occurred.

We returned to Plymouth that night, I did not see my ship sink. 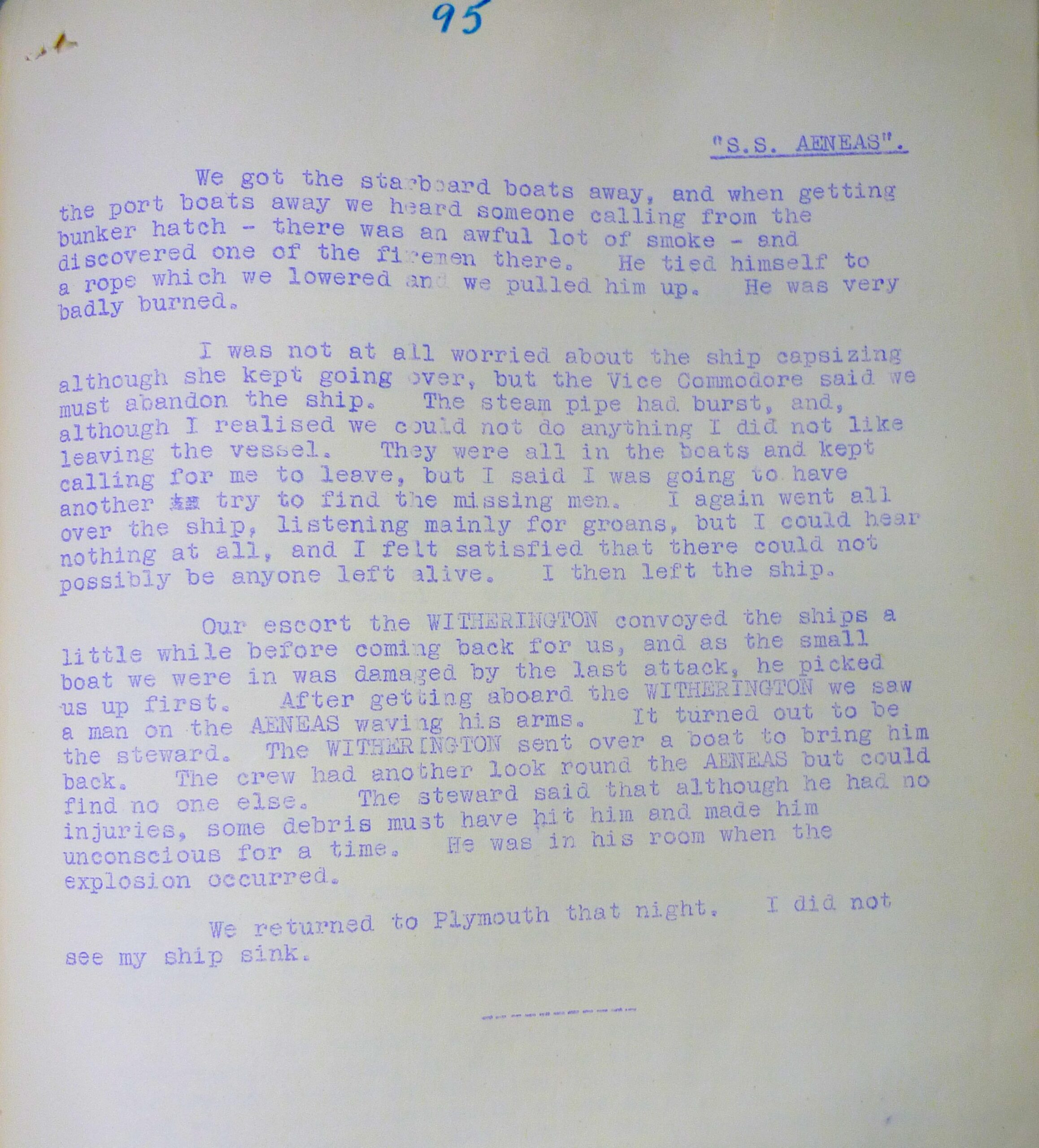 Passenger Liner [56M] (Clarke: GPS not given.)  This vessel was a troop ship in WW1 and was stranded in Rathlin Island in 1918 but was re-floated.  In WW2 she was part of a convoy carrying the Convoy Commander and his staff.  She was sunk by German Aircraft 11 miles and 45 degrees from Portland Bill.

Aliases, aka: The spread out wreck