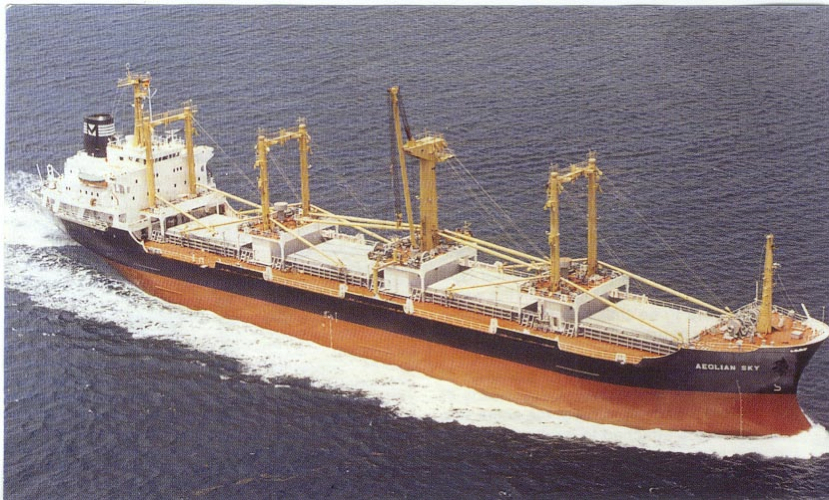 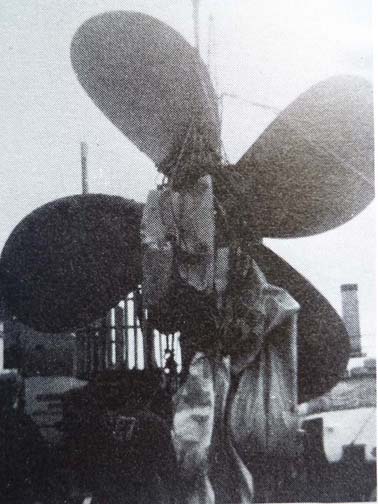 Propellor salvaged from the wreck 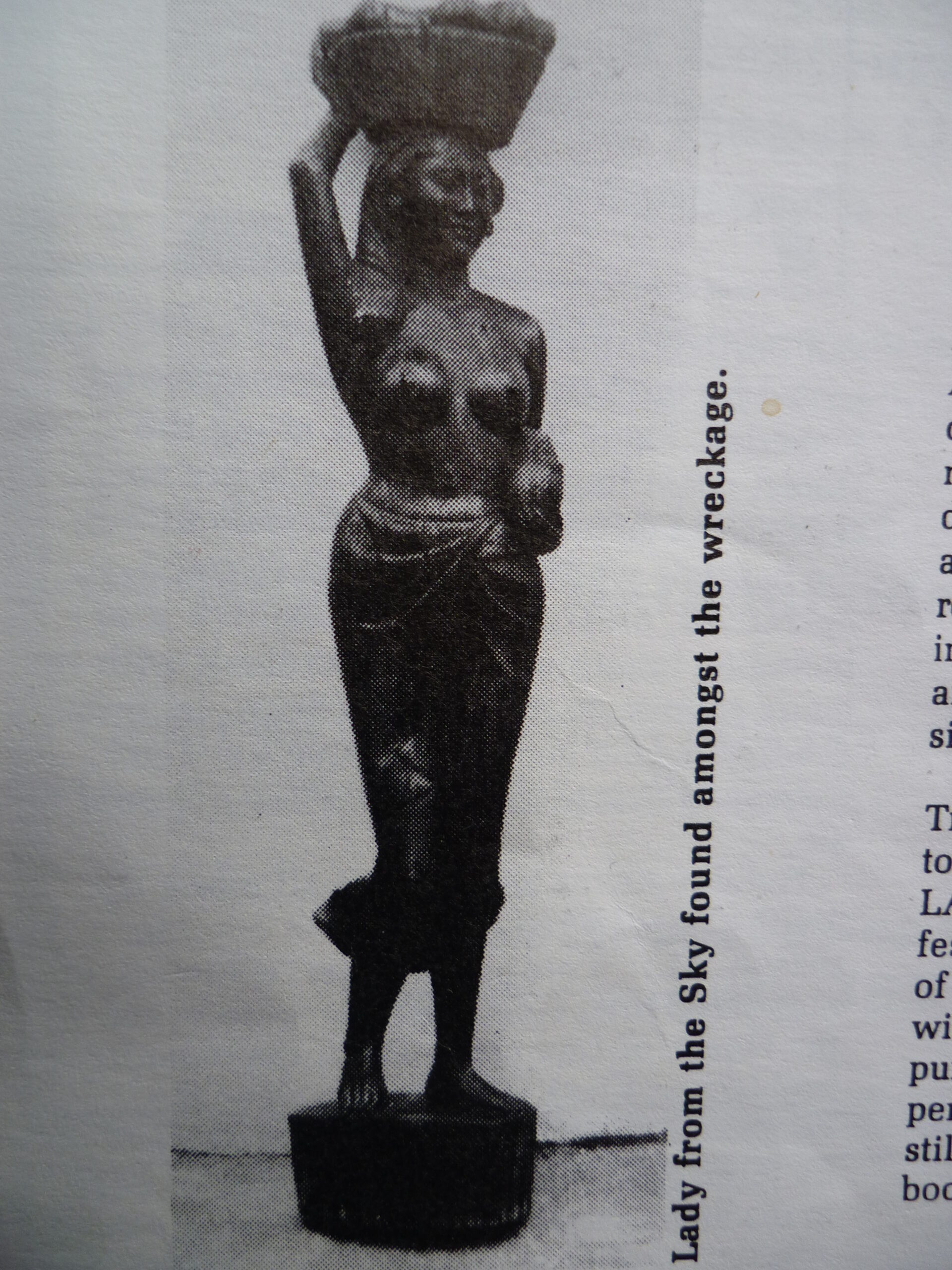 Bronze figure salvaged from the wreck

She was just a year old, and big with it. Her hull and machinery was valued at over £3 million. That figure didn’t include the cargo with which her holds were stuffed, or the many containers and dozens of Land Rovers on deck. That deck cargo made the 10,715 ton Greek motor vessel AEOLIAN SKY look even bigger, as she headed down the Channel from London for Dar-es-Salaam.
Despite foul weather, the 148m-long ship made good progress until, on 3 November, 1979, she collided with another motor vessel, the West German ANNA KNUPPEL.
The Greek came off worst, badly holed in No 1 hold and flooding so heavily that her bow was almost under water. Her crew were all taken off by helicopters, before a French tug got her in tow and headed for Portland Harbour. Early the next day, the Sky sank amid gale-force winds and huge seas 12 miles off Portland Bill.
Poisonous chemicals in drums were soon being washed ashore along the coast of the Isle of Wight, and a major danger alert was put into operation. The cargo was listed as hundreds of containers of such chemicals plus paint and thinners, liquid chlorine, butane aerosols, Bostik cleaner, ammonia, glass, barbed wire and, of course, Land Rovers.
She was also said to be carrying more than a million pounds in Seychelles rupee bank notes in her sickbay (for want of anywhere else to put them). Most of these are still missing 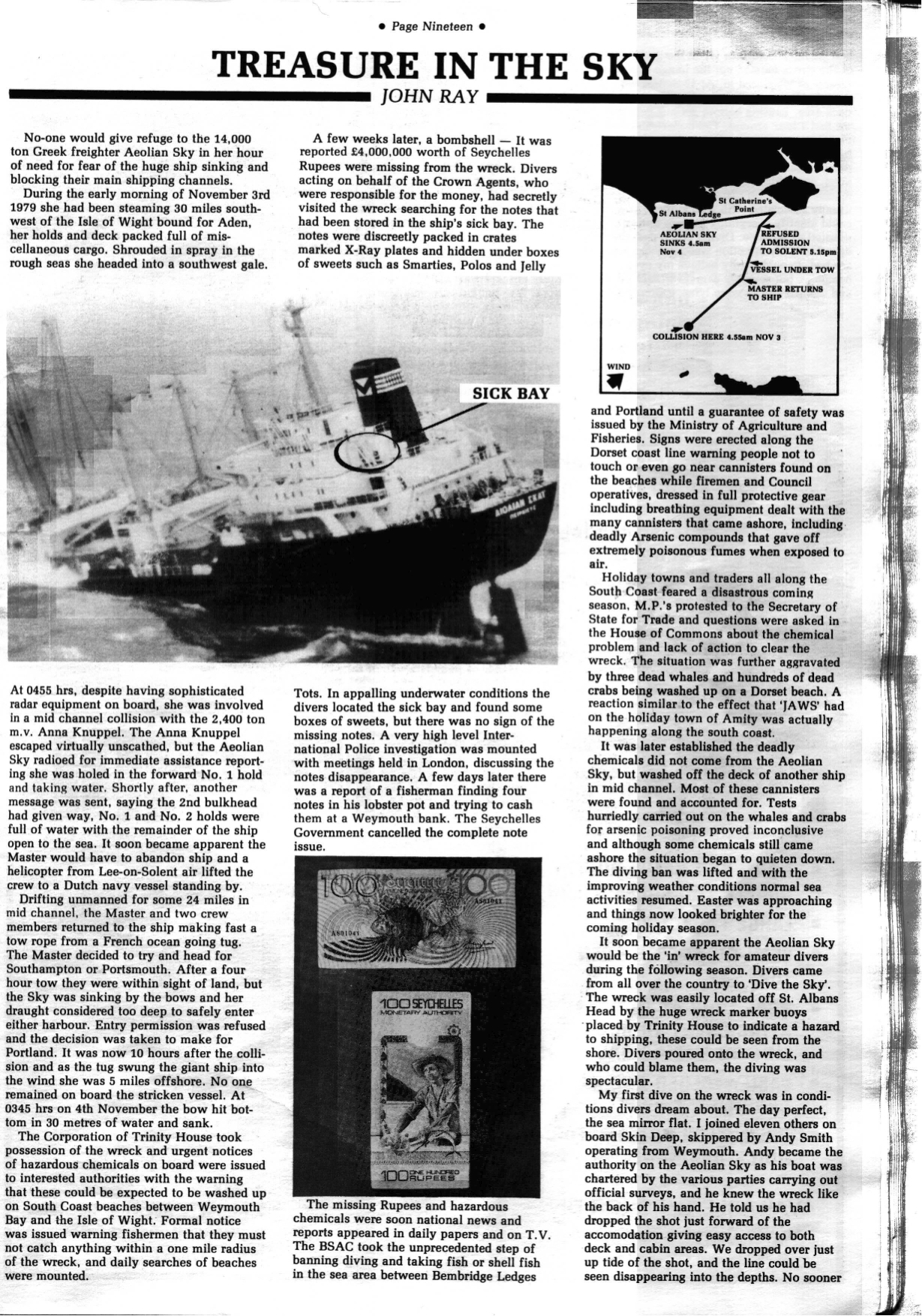 No-one would give refuge to the 14,00 ton Greek freighter Aeolian Sky in her hour of need for fear of the huge ship sinking and blocking their main shipping channels. During the early morning of November 3rd 1979 she had been steaming 30 miles south west of the Isle of Wight bound for Aden, her holds and deck packed full of miscellaneous cargo. Shrouded in spray in the rough seas she headed into a southwest gale.

At 0455 hrs, despite having sophisticated radar equipment on board, she was involved in a mid channel collision with the 2,400 ton m.v. Anna Knuppel. The Anna Knuppel escaped virtually unscathed, but the Aeolian Sky radioed for immediate assistance reporting she was holed in the forward No. 1 hold and taking water. Shortly after, another message was sent, saying the 2nd bulkhead had given way, No. 1 and No. 2 holds were full of water with the remainder of the ship open to the sea. It soon became apparent the Master would have to abandon ship and a helicopter from Lee-on-Solent air lifted the crew to a Dutch navy vessel standing by. Drifting unmanned for some 24 miles in mid channel, the Master and two crew members returned to the ship making fast a tow rope from a French ocean going tug. The Master decided to try and head for Southampton or Portsmouth. After a four hour tow they were within sight of land, but the Sky was sinking by the bows and her draught considered too deep to safely enter either harbour. Entry permission was refused and the decision was taken to make for Portland. It was now 10 hours after the collision and as the tug swung the giant ship into the wind she was S miles offshore. No one remained on board the stricken vessel. At 0345 hrs on 4th November the bow hit bot tom in 30 metres of water and sank. The Corporation of Trinity House took possession of the wreck and urgent notices of hazardous chemicals on board were issued to interested authorities with the warning that these could be expected to be washed up on South Coast beaches between Weymouth Bay and the Isle of Wight. Formal notice was issued warning fishermen that they must not catch anything within a one mile radius of the wreck, and daily searches of beaches were mounted.

A few weeks later, a bombshell. It was reported £4,000,000 worth of Seychelles Rupees were missing from the wreck. Divers acting on behalf of the Crown Agents, who were responsible for the money, had secretly visited the wreck searching for the notes that had been stored in the ship’s sick bay. The notes were discreetly packed in crates marked X-Ray plates and hidden under boxes of sweets such as Smarties, Polos and Jelly Tots. In appalling underwater conditions the divers located the sick bay and found some boxes of sweets, but there was no sign of the missing notes. A very high level International Police investigation was mounted with meetings held in London, discussing the notes disappearance. A few days later there was a report of a fisherman finding four notes in his lobster pot and trying to cash them at a Weymouth bank. The Seychelles Government cancelled the complete note issue. 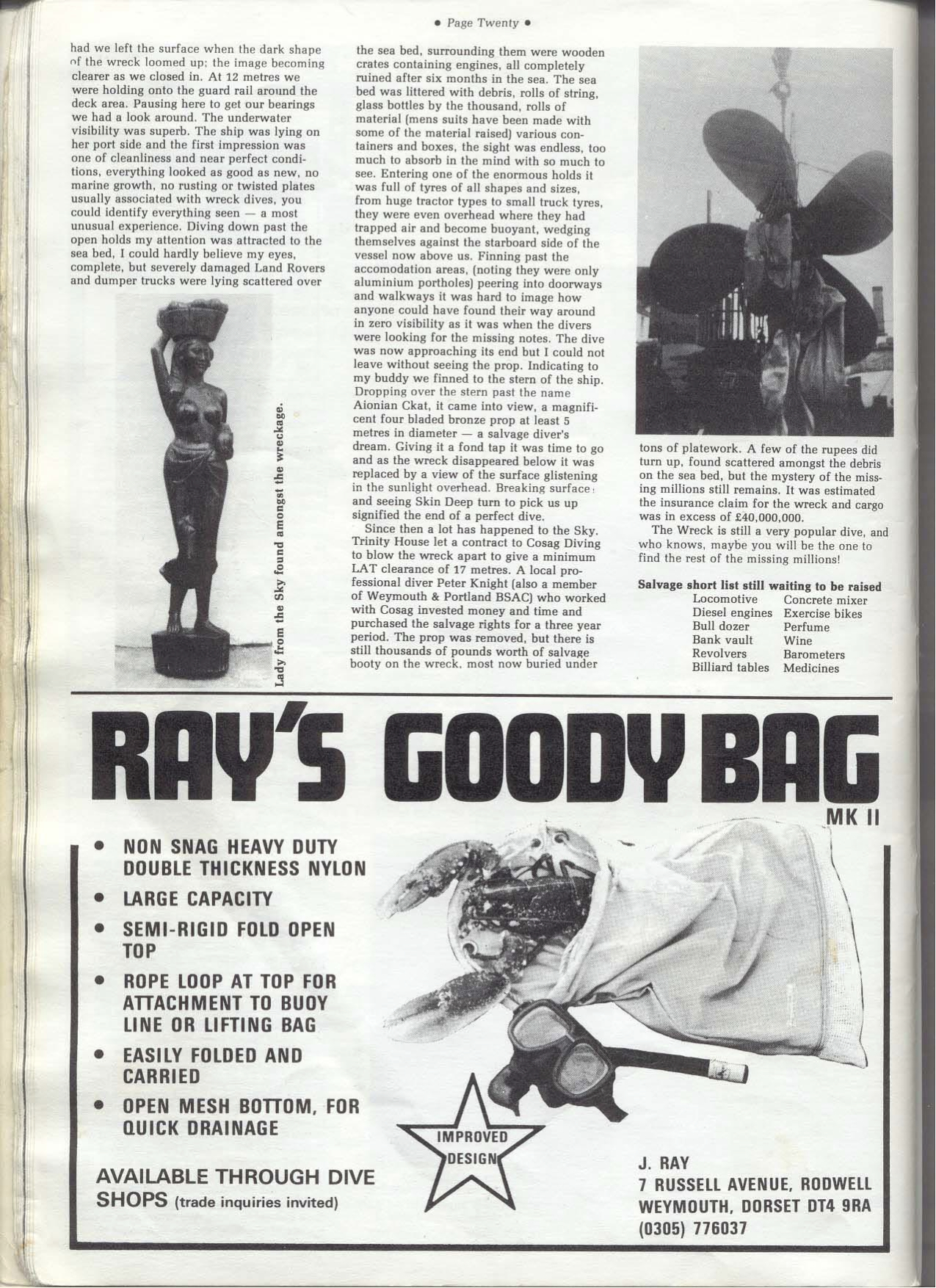