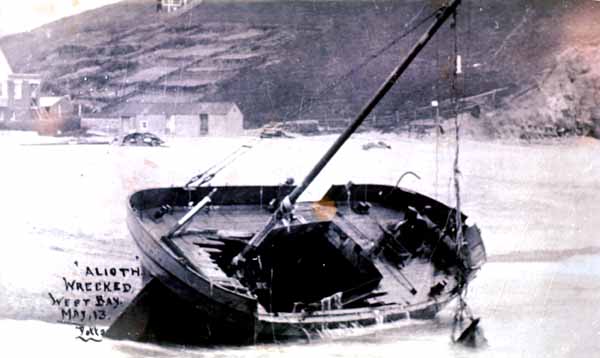 Very occasionally a wreck can even raise a smile. Such is the case of the Alioth at West bay. In May 1923 the German Ketch Alioth was preparing to leave Bridport harbour, a strong south west wind was blowing across the harbour entrance and the captain was advised to get a tow from the steam tug, and only set sail when he was well offshore. The tow would have cost 10 shillings. The captain refused and as soon as the Alioth left the harbour it was swept back on the beach and became a total wreck. No one was killed, but one wonders what the captain said to the ships owners!

Swedish Ketch, Gothenburg to Bridport.  Cargo, Wood.  (LARN) – Driven up on the East Beach at Bridport. She had set sail against advice of the local pilots.  The Rocket Apparatus was used in the rescue.  Weymouth Library Photo L910.4.AL.1.  (LePard: p140)  Farr: p28.