THE LOSS OF A VESSEL (Anemone) OFF PORTLAND.

The brigantine Anemone, of London, was sunk oft Portland on Wednesday night, by collision with the American barge Hannah Parr. The crew were saved, but the captain was injured. The mate and cook left the barque in a boat to search for the ship, but, losing the oars, they were picked up and landed at Weymouth. The Anemone appears to have been the vessel which was reported to hare sunk in consequence of an explosion on board. 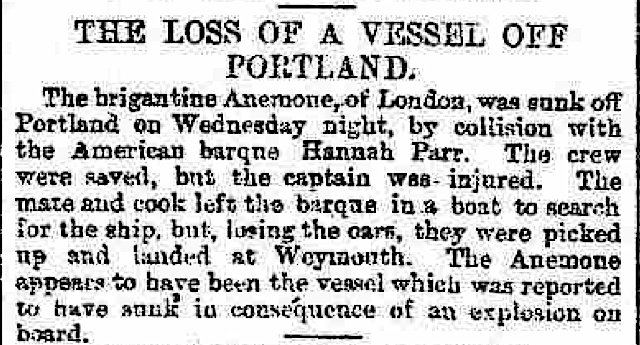 “There has arrived in Weymouth Sailors Home, mate John Tanner; the cook; David Boyne?, steward, of the brigantine ANEMONE. She was in collision at 7.30 p.m. on Wednesday with the Norwegian barque HANNAH PARR, of Christiana. The Norwegian vessel was heading up channel from Quebec with deals, when she stuck the other vessel amidships, bring down all the rigging. All of the crew attempted to reach the Norwegian ship but the master fell between the two vessels and was in the water for 30 minutes before rescue and was much exhausted. He requested the Norwegian captain to lay by the wreck all night but since she was making water this was not possible. The mate of the ANEMONE returned to the wreck in a boat to survey the damage, finding 3-4 feet of water over the ballast, and the sea pouring in on both sides, he and the cook who had volunteered to help, plugged the holes, whilst the Norwegian vessel continued on her way. The mate only was later picked up alive”

“By the arrival of the mate and cook of the brigantine Anemone, 141 tons register of London, Captain Thomas Watkins, we learn that their ship had been in collision at 7.30 pm on the evening of Wednesday, when about 14 miles S.S.W. of Portland, with a Norwegian bark , the Hannah Parr of Christiania, and is supposed to have foundered. She was on a voyage from London to one of the ports on the coast of Morocco in ballast. The Norwegian bark was from Quebec, with deals. She struck the schooner amidships, bringing everything overhead down by the run. The crew, seven in all, tried to scramble onboard the bark, but in doing so the master fell between the two ships, and nearly half an hour elapsed before he could be got out, when he was in a most exhausted condition, and gave the mate commands to do the best he could for the safety of his ship. The mate asked the captain of the bark to lay by until daylight, which he said he was unable to do as his ship was making water. The mate thereupon asked him to lend him a boat, so that he might ascertain the extent of the damage to his own ship, and on getting onboard he found two or three feet of water running over the ballast, coming in from a hole in her side. He thought he could succeed in plugging this, believing she would thus keep afloat until daylight, and asked his crew to come on board with him. This, however, they were afraid to do so, only the cook volunteering. They then got into one of the bark’s boats, for the purpose of proceeding to their ship, the bark herself going on her voyage. While in the boat a tremendous sea struck her, flinging the mate overboard and carrying away both oars, but, fortunately, the cook was able to save his companion. This happened about two hours after the collision, the boat being tossed about at the mercy of the sea and wind, and the poor fellows remained in this exposed state until 11’oclock on Thursday morning, when they were picked up by the smack Express of Colchester, off Portland, and landed there. They were conveyed to the sailors home at Weymouth in a very exhausted state. The men state that they saw nothing of their ship after losing their oars. There is every reason for supposing that the ship which exploded on Thursday off Portland Bill was the brigantine anemone. It is thought she must have floated for over 12 hours, instead of foundering soon after the collision, when, on becoming waterlogged, the pressure of air rent open her decks and thus caused the explosion which the Portland Coastguard reported, although it is strange no fragments of wreck have been seen.

Captain A H Kingman and his wife and the crew, 15 in number, of the American bark Robert Kelly, which vessel, together with the English bark Huddersfield, sank through a collision with each other on the morning of Tuesday off Weymouth, were landed at Portland in a totally destitute condition, and arrived at Southampton on Thursday. It appears that by recent proceedings in congress certain alterations and reductions have been made in the united states consular arrangements for this district, and among them the consular agent at Weymouth has been abolished. There was, therefore, no official to look after the wants of these shipwrecked people at Weymouth. They were taken care of in the sailors home, and subsequently forwarded on by the shipwrecked mariners society to Southampton. Mr William Thomson, the consular representative of the American government at that port, made arrangements for their temporary reception in the sailors home, and on Thursday evening, he having provided them with the necessary means, Captain and Mrs Kingman proceeded for Liverpool, and the crew were sent on to the United States Consular – General in London”