Barque – (LARN) – Broadhope Ledge, Portland. Good Local Story. The cargo is listed as Cargo COAL, however additional cargo is believed to be Cargo RAILROAD IRON and Cargo FIRE BRICKS. The hull was brought by a John Way. Eleven seamen were sent to their homes by Mr R. Damon of the Shipwrecked Mariners Society. Larn relates a story, possibly from DCC: 30/01/1868. “There is a story told on Portland in Weston or Southwell, regarding the expression still used; ‘stick to the pork, Archie’, which came as a result of this wreck. As the BANK started to break up, barrels of pickled pork, provided for use by the crew, started to float clear. Samuel Archie, a local inhabitant, plunged into the sea after them, whilst his wife Molly kept shouting at him from the cliff “stick to the pork Archie, never mind anything else, stick to the pork!” 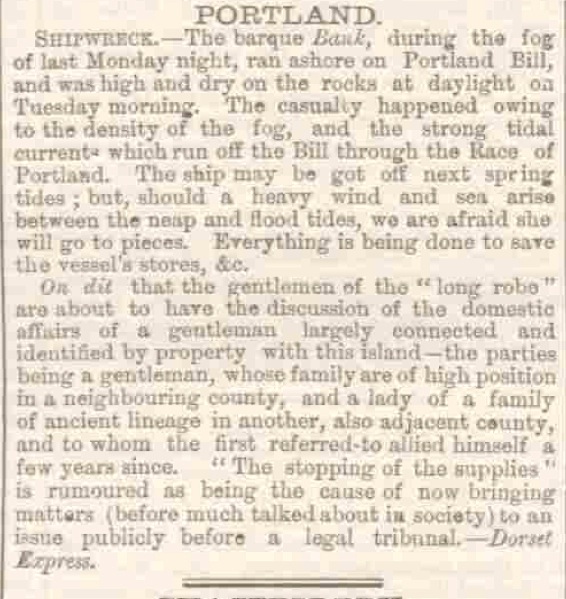 SHIPWRECK.-The barque Bank, during the fog of last Monday night, ran ashore on Portland Bill, and was high and dry on the rocks at daylight on Tuesday morning. The casualty happened owing to the density of the fog, and the strong tidal current which run off the Bill through the Race of Portland. The ship may be got off next spring tides; but, should a heavy wind and sea arise between the neap and flood tides, we are afraid she will go to pieces. Everything is being done to save the vessel’s stores.

On dit that the gentlemen of the “long robe” are about to have the discussion of the domestic affairs of a gentleman largely connected and identified by property with this island – the parties being a gentleman, whose family are of high position in a neighbouring county and a lady of a family of ancient lineage in another, also adjacent county, and to whom the first referred-to allied himself a few years since. “The stopping of the supplies” is rumoured as being the cause of now bringing matters (before much talked about in society) to an issue publicly before a legal tribunal.