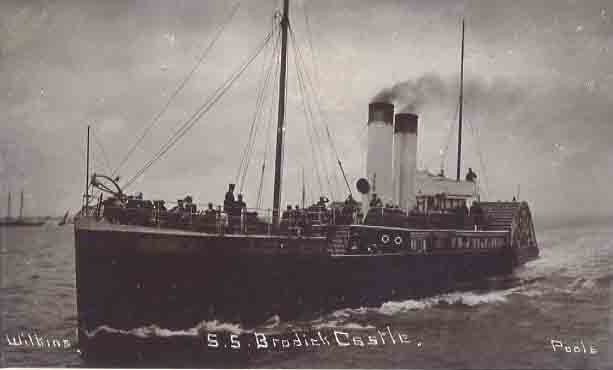 After the loss of the paddle steamer BOURNEMOUTH, her owners completed the season by chartering the PRINCESS HELENA and then the paddle steamer BRODICK CASTLE (2x2cyl. comp. 96 hp manufactured by W. King & Co. Glasgow). She went into service as a passenger vessel in 1887 and was the largest pleasure steamer on the South Coast at the time. Her engines were in fact second hand, having been taken out of the S.S. EAGLE, when it was found they were too large with heavy coal consumption, equal more to an Atlantic liner than a pleasure steamer.  Her owners sold theBRODICK CASTLE after the 1909 season to a South American company for service as a cattle boat.  She was stripped of her engines, boilers, funnels, accommodation renamed the PECA NOVA and turned into a huge barge, which left Weymouth under tow.  On passage, several huge waves broke over both barge and tug, breaking the tow, and the barge sank.

Spelling of BRODICK or BRODRICK or BRODERICK needs checking.  Ed. assumes this is the steamer that caused so much damage.  See saga starting with EDWARD & SARAH in 1897.

This record had her listed as PECA NOVA (See Larn Index) but Richard has PACA NOVA?

After a long period in the Bournemouth Company and Cosens fleets she was thoroughly worn out by the summer of 1910 and was used almost exclusively on the fleet contract out of Weymouth. Cosens then swapped her for a little steamer called HELPER, and she went off to Holland where she was stripped of her upper works , engines, boilers and accommodation and converted into a cattle barge for use on the River Plate. Her focusle was left intact and light cattle decks were constructed above the hull. She was renamed PACA NOVA.

She set off for South America in tow of the tug MARIA HENDRIKA on 25th October, and were somewhere between Portland Bill and Start Point on 31st when they were struck by a gale. The tug’s engine room began to flood , the tow parted and it was impossible to re-connect, so the passage crew jumped overboard wearing life jackets and were picked up by the tug. The tug stood by for some hours but lost sight of her in the early hours and assumed she had foundered. The tug put into Dartmouth to report that the PACA NOVA had been forced east by wind and tide and had foundered in a position of 50 degrees 30 min North, 02 degrees 20 mins west, which puts her in 21 m of water one mile due south of the East Shambles buoy.

NOTE:
If you can lay hands on Richard’s Book “Cosens of Weymouth 1848-1918”, you’ll find the ship’s full history and lots of photos