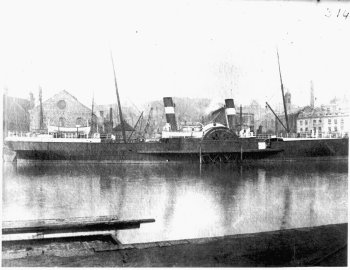 The Countess of Erne – Portland Harbour

“My diving career began in the relative calm of Portland Harbour where we were to dive on the wreck of an old coal hulk, known to all as the HIMALAYA, an ex-troopship in use during the Crimean War and sunk during a bombing raid in the last war.  The wreck is arguably the best novice dive on the South Coast, being well sheltered by the Breakwater, easy to locate, at a reasonable depth (40ft to the deck) and above all, actually looking like a ship, being perfectly upright with little sign of damage.  When built in 1853 she was the wonder ship of the time and by far the largest steamer afloat.

Coal hulks were old ships moored in ports and harbours that were used to store coal for bunkering coal fired ships.  They were frequently moored in anchorages and estuaries so that their customers could come alongside and replenish their bunkers.  The hulks were generally stripped of masts and fittings to provide maximum hold space for the coal.  They were generally sup0plied from costal colliers.  Transfer to bunkers would be carried out by whatever means were available, whether manual labour, derricks on the “host” ship or “Temperley” gear on the hulk (a Temperley Transporter was a form of belt conveyor introduced by Sir William ARROW of Glasgow in 1893 as a means of expediting coaling, mainly fitted in a limited number of coal hulks, though a few were carried by ships.  The largest installation was at Portsmouth).

The GREAT BRITAIN was used as a coal hulk at the Falkland Islands before being brought back to Bristol.  The practice continued with oil fired ships too, with hulks acting as storage/loading facilities.  HMS WARRIOR, now restored and berthed at Portsmouth, served many years as an “oiling” hulk for warships at Milford Haven.

The HIMALAYA, being a coal hulk, has practically nothing left in the way of superstructure, and as the bulkheads have for the most part collapsed, it is easy and quite safe to swim form the chain locker, where the anchor chain was stored in the bows of the ship, past the heads through the inner holds and into the stern where there remains but a skeleton of a deckhouse and single davit.  All the goodies have long gone.

I have dived on the wreck many times since, and when I became Projects Officer of Oxford British Sub-Aqua Club in 1974, I decided to go ahead with a plan that had been germinating for some time, to measure and prepare a drawing of the wreck.

During the survey weekend a group of us were chatting to some local people, and one of them mentioned seeing a sketch of the HIMALAYA in a boat yard at Ferrybridge.  The vessel depicted in the drawing was very different to the wreck we had dived on.  It was quite possible that during hulking the silhouette had changed, but in the drawing the HIMALAYA was powered by steam as well as sail, and on our wreck there was no sign of any stern shaft – the rudder was direct onto the keel as in a sailing ship.

Back at Oxford I went hunting through libraries and bookshops and came up with a picture of the HIMALAYA together with a brief history. She had been bombed at Portland by a Junkers 88 from 500 feet at 21.20 on 5th June 1940; but her length was 340feet and breath 46.2 feet, the survey gave estimated dimensions as length 340 feet and breadth 29feet – surely we could not have been so much out.

Becoming more and more intrigued, I wrote to the Imperial War Museum and the Hydrographic Dept at Taunton, their information was that the wreck we were surveying was the HIMALAYA.

I next wrote to the editor of the Dorset Evening Echo, the result was highly satisfactory, and the following week was one of the most fascinating I have ever spent, as every day brought at lease two letters.  These revealed that the HIMALAYA was at lease ¾ mile from the Breakwater when she sank.  They also revealed that on the 16th September 1835, in a strong blow, a coal hulk broke free of her moorings and drifted through the North Ship Channel before holing herself on the north east breakwater of Portland Harbour with her stump masts and Temperley gear just about in the water.  This gear was removed by a local firm Bass Turner, and she slid down the tipping and came to rest adjacent to the stones at the bottom of the breakwater.  The name of this vessel was COUNTESS OF ERNE.  This then had been the ship on which we had been diving for all those years thinking it was the HIMALAYA.

Traffic on the LNWR route from Holyhead to Dublin increased very fast in the 1860s, such that four new ships had to be built in quick succession; DUKE OF SUTHERLAND, DUCHESS OF SUTHERLAND, COUNTESS OF ERNE and EDITH.  The Earl of Erne, Chairman of the Irish North Western Railway, which was associated with the DN and GR project, the latter, of course being wholly owned by the LNWR.

The COUNTESS OF ERNE was an iron paddle steamer built by Walpole, Webb and Bewley of Dublin in 1868, and had a length of 241 feet 4 inches and breadth of 29 feet its displacement was 830 tons and she had a 14feet 3inches draft.  She had two oscillating cylinders of 64 inch diameter and 60 inch st?? were built by Fawcett Preston and Co of Liverpool, delivering a total of about 300 nominal horsepower, which was sufficient for 15 knots, and she was reportedly the fastest ship in the LNWR fleet at that time.  She was fitted out to carry approximately 700 passengers, more that 100 of them being First Class.  She was also able to carry 700 tons of cargo.  In 1873 she was transferred to the Greenore service.

During this time, she had the following Masters (Captains)

New twin screw steamers were built in 1888 and in 1889, and Countess of ERNE was then put up for auction in Liverpool, and purchased by the Bristol Steam navigation Company, which put her into service for two years, before she was sold for scrap.  In 1890 she was converted into a coal hulk and used at several ports before finally being moored in Portland Harbour.

The information is drawn largely from an article I wrote for Sub Aqua magazine in 1976, plus details of the ship from Railway and other Steamers by Duckworth and Langmuir (Stephenson 1948, second edition 1968), much of which is also in The Holyhead Steamers of the LNWR by Pearsall and Davies (LNWRS).

This was all a long time ago but recently the Nautical Archaeological Society has taken an interest in the wreck and I have sent the Society all the information I have.  It has brought back many happy memories of my diving days and I am please that other groups have also found an interest in the old paddle steamer.

WRECK ON THE INSIDE OF THE NORTH EAST BREAKWATER.

PLATE FOUND ON THE FORWARD WINCH