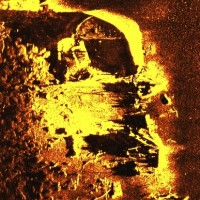 Sonar image of the Enecuri in Portland harbour

Fearful Gale – Loss of a Spanish Steamer. The closing days of the old year have been marked by a gale of terrific violence which has caused a great amount of damage both on sea and land. The gale set in from the west on Thursday night and increased in violence before daybreak on Friday. There was a lull for a short time between eight and ten, after which the gale increased in force, blowing down trees, partly un-roofing houses, and causing other damage. Walking in the streets was absolutely dangerous on account of the falling slates and tiles. The Backwater and harbour were in a very rough state, there being some large waves, the spray from which was scattered in all directions. On Thursday afternoon a Spanish steamer came into Portland roads, and being light the wind took her bows and she drifted within a short distance of the old breakwater but at last got into a place of safety for the time near HMS ALEXANDRA. On Friday morning with the increased gale the steamer again drove and went on the breakwater. Messrs Cosens and Co’s tugs went to render assistance if any could be available in such a terrible gale and the lifeboat was manned and taken in tow of one of them in order if possible to rescue the crew. The boat returned about noon not being able to get near the breakwater on account of the sea. The captain and crew were rescued by some of the Royal Artillery stationed at the Breakwater fort, and were given shelter and food there. As the tide was flowing on Friday night and the wind veered a little to the north, before the water had submerged the steamer the captain desired to go on board though grave doubts were entertained that the craft would during the night slip off the rocks. Although persuaded not to expose himself to such a risk he went on board and in company with the ship’s dog went to sleep in his bunk and nothing more was seen of him or the animal. About half-past seven on Saturday morning the steamer made a complete “turtle” over and went down with the captain and dog. As she went down she righted herself and her masts and funnels are to be seen The steamer proved to be a large one of 3,600 tons bound from Antwerp to Bilbao in ballast. In the course of the morning the remainder of the officers and crew were landed at Weymouth and soon after reshipped on a steamer bound for Bilbao.

The wreck of the Spanish Steamer. The divers of the salvage steamer ALERT whilst at work on the Spanish steamer ENECURI which went down on the Breakwater on Dec. 29th 1900 found on Thursday morning the remains of the captain of the ship and his dog. The diver of the ALERT told our representative on Thursday evening that when he went down to the ENECURI that morning he descended through a hole cut in the deck to the captain’s cabin. The door was open and the floor was covered with some inches of mud. In this latter he saw what he took to be a white basin and picked it up, returning to the deck of the ship for a closer inspection. When he got up nearer the surface and could see better he found. the object he held in his hand was a human skull. He then went down for the rest of the bones and brought them ashore later in the day. PC Osman who went for the remains obtained the permission of Staff Surgeon Corcoran to deposit the skeleton in the mortuary at the Naval Hospital pending the arrival of the Coroner’s orders for their interment. No inquest will be held.

NOTE:  The Spanish captain is recorded as being Jose Boman, 42 years old.  His death was entered in the sub district of Portland records on the 3rd October, 1903, having been found on the 1st October in the wreck.