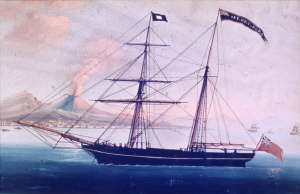 Schooner – DCC: 11/02/1869, “The brigantine HENRY & DORA, of Aberystwyth, John Thomas, master, struck on the rocks forming the base of the breakwater on Friday last during a fresh breeze from the S.S.E. The crew were taken off by some boats from the shore, and a steamer put out from Weymouth; but, owing to the vessel making so much water it was impossible to get her off. She was, however, stripped, and the masts taken out of her. During the south-westerly gale on Sunday she went to pieces. Captain John Thomas attributed her loss to having ‘missed stays’? in consequence of the light winds. The shipwrecked crew were sent to their homes in Llanelli by Mr Damon, agent of the Shipwrecked Mariner’s Society at Weymouth, (Detail also in LARN) – Portland Breakwater.

The brigantine ‘Henry and Dora’ was built in 1849 by the brothers John and Henry Harries. The following appeared in a contemporary newspaper of 1849: ‘The brigantine ‘Henry and Dora’ was launched in the presence of hundreds of spectators. A beautiful model, and appears a very fast sailer and is intended for the Mediterranean and Baltic trade. David Rees, commander’. David Rees (1822-1885) was the son of Jenkin Rees, master mariner of the Sailors Arms, Aberaeron. Source: ‘Aberayron 1971 Exhibition of Paintings of Sailing Ships and Ships Equipment by Gwilym M. Jones’