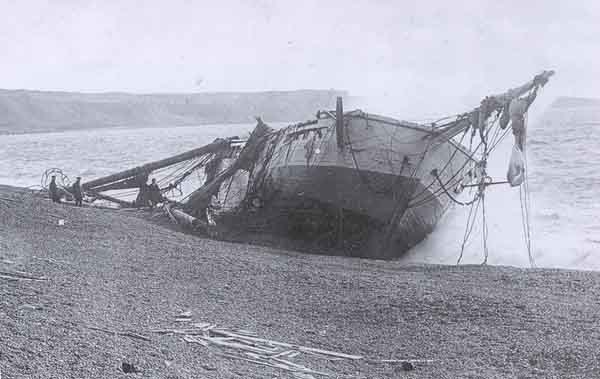 EMMA MARIA [25/10/1903] A Russian Schooner carrying a cargo of China Clay got into difficulties in West Bay. Two tugs were sent to the rescue and one, the PETREL managed to get a line on-board but it parted, damaging the tug which was forced to return to Weymouth. Anchors failed to hold the EMMA MARIA and by the evening she had drifted on to the Chesil Cove. The surf was horrendous, nobody dared to try and leave the ship. Luckily as the ship started to break up the mainmast fell towards the shingle bank forming the life saving bridge you can see in the photograph on the right. The entire crew were saved. Farr: p45. 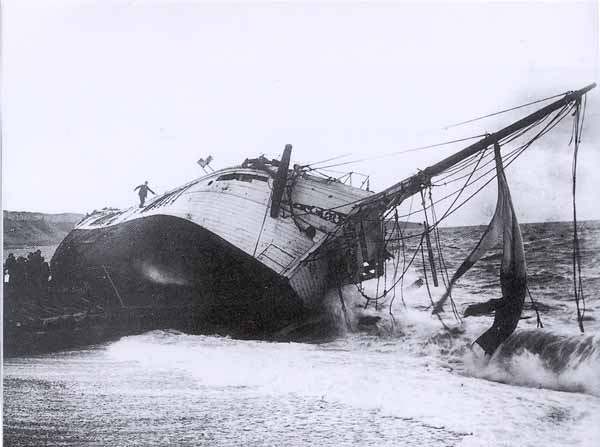 The next day [26/10/1903] the Norwegian Barque PATRIA was literally blown into Chesil Cove. There were already crowds of people in the Cove watching the plight of the Russian Schooner EMMA MARIA on the Chesil Beach when they noticed this second ship with tattered sails wallowing in the rough seas. PATRIA had a cargo of timber en-route from Friedrickstad to Durban. The Rocket Apparatus was set up and a line was secured aboard. After some confusion amongst the crew as to how the equipment was to be used the entire crew were successfully brought ashore, including two who despite advice from those on shore, jumped into the water. Photograph Left.

The Captain was a D Danielson, who it is said, told his crew that it was either the Chesil Bank or the greater danger of the Devon Coast. “Are there any objections, he asked”.

Following the rescue the second Mate had to have a leg amputated and the cook, who had been trapped in the wreck, went mad and had to be put in a straight jacket, “his mind having gone”.

Below: One minute a fine vessel the next matchwood scattered over the beach. Click to view. 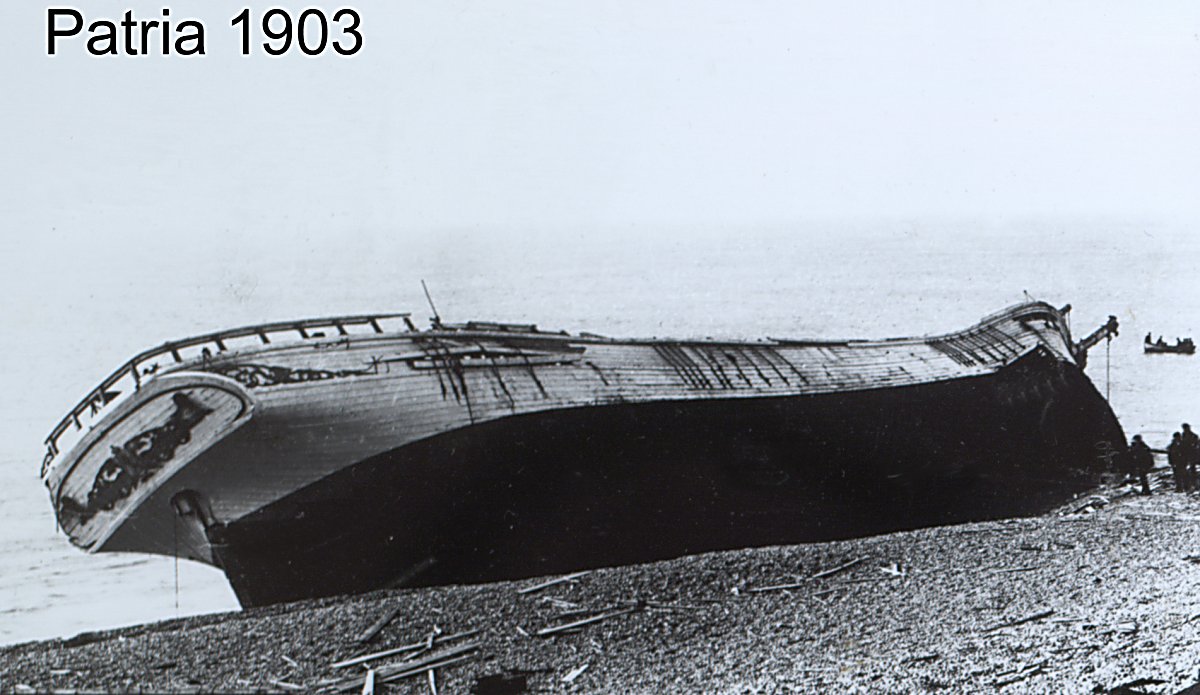 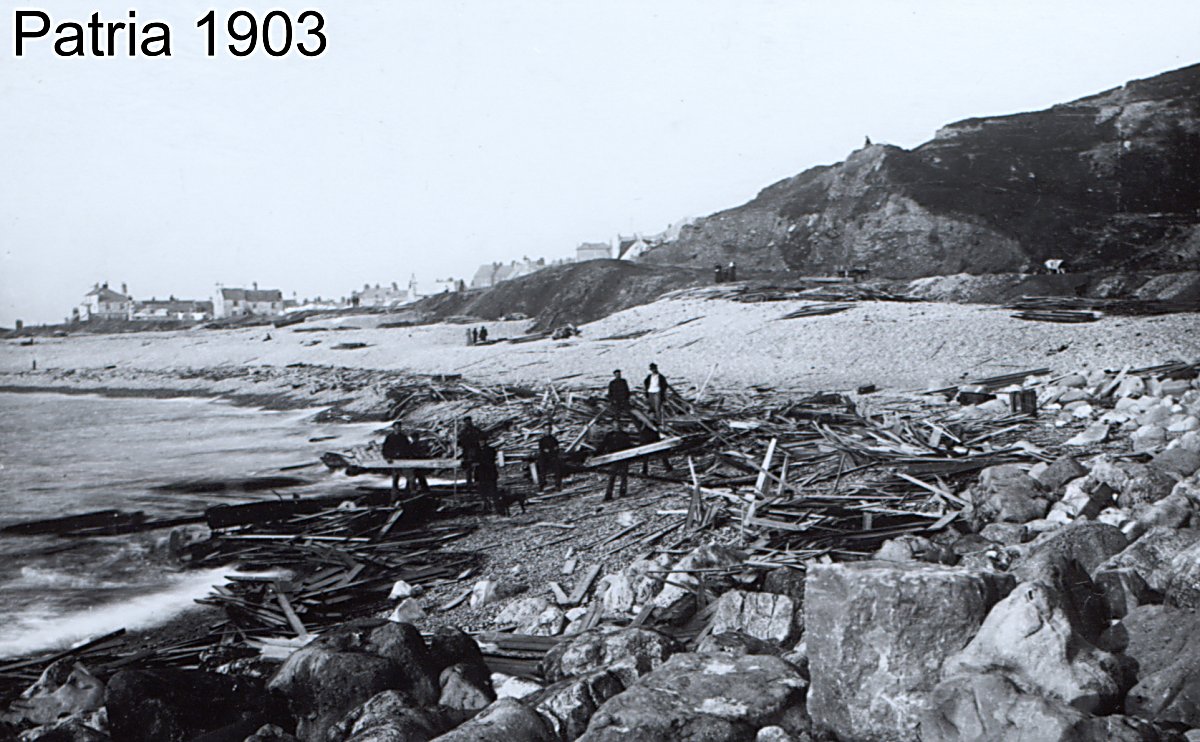 On Monday morning about noon a Norwegian barque, the PATRIA, from Christiania to Port Natal, with timber, was seen in the West Bay carrying full sail. A heavy squall came on, and nearly all the sail was swept away. The barque became unmanageable, and drove right on to the Chesil Beach. The coastguard used the rocket apparatus, and succeeded in getting a line on board, but the crew apparently did not understand its use. Two of the crew put on lifebelts, and leapt over the side. One of them was in imminent danger when Boatswain Norris, of the AGINCOURT, dashed in and at great risk rescued the man. The other man had nearly reached the shore when he was washed out again. Norris, and a coastguardsman named Aers, despite the heavy sea, ventured into the water and got the drowning man ashore. Then the remainder of the crew got the cradle of the apparatus to work, and all the 11 men on board were saved, the captain being the last to leave. One of the men broke his leg, and a boy fractured an arm through the fall of rigging. The PATRIA, which was 21 days out, had encountered terrible weather in the Channel and lost a man overboard. The crew were taken to Weymouth by the Norwegian Vice-Consul, and at the Sailors’ Home were fed and re-clothed. A small smack also went ashore, and it is feared that another vessel has gone down off Portland.

Charge of Theft from the Wrecked Barque. At the borough police court on Friday night Henry Pitman, general dealer and haulier of Highstreet Weymouth, was charged with stealing a quantity of metal sheeting and other articles belonging to the barque PATRIA, now stranded on the Chesil Beach, on Thursday. Detective-Sergeant Lakey deposed that at 10 o’clock that morning, accompanied by P. S. Loveless and P. C.’s Palmer and Moore, by virtue of a warrant, they searched prisoner’s premises in High-street, which consisted of a store adjoining his private house. The result was that they found in prisoner’s house two wire hawsers, a quantity of metal in bags, metal bolts, block, &c., and in the stores a quantity of new rope, four pieces in all. Prisoner said “It is stuff belonging to the ship now stranded on Portland Beach. I was employed by a man who is salving the ship to convey it to Weymouth in my waggon. On my arrival at Weymouth, Mr Vallance’s yard was locked, and I put the stuff into my store.” Mr. Butt, the Norwegian vice-consul, then arrived on the scene and identified the property as belonging to him. The accused was remanded until Saturday, his own recognisance of £50 being accepted.