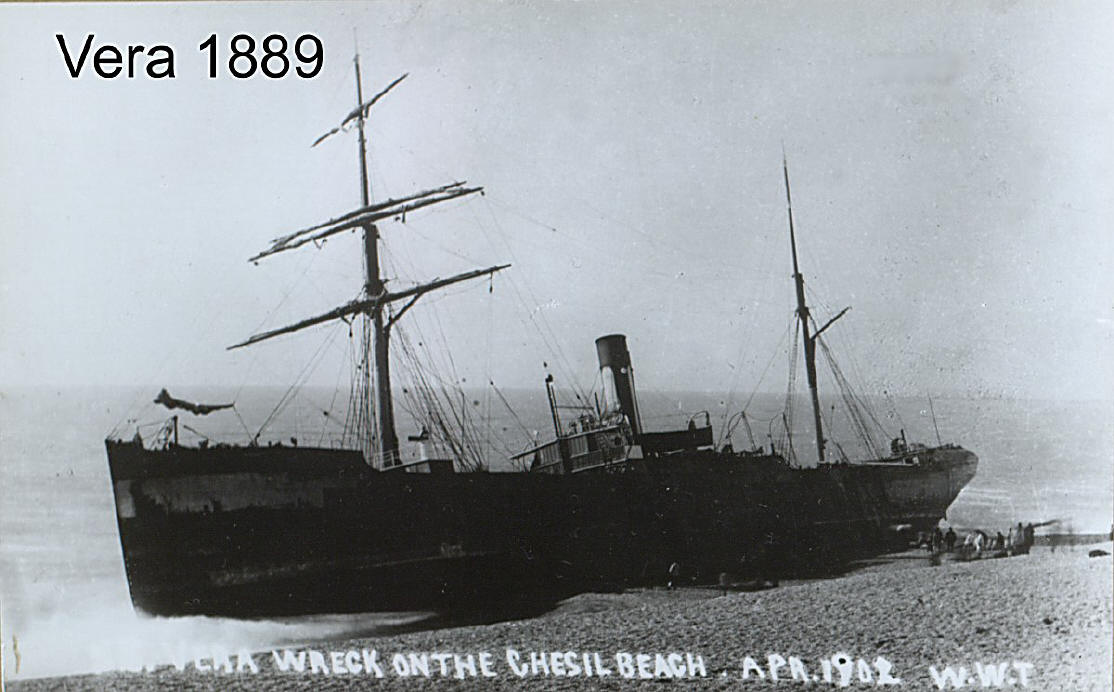 When the news of the disaster reached Weymouth early on Friday morning, Mr. William Butt, acting on behalf of Lloyds, at once proceeding to Langton coastguard station, in company with Mr. H. Fooke, the acting receiver of wreck, and Mr. S. J. Fowler, Messrs Cosens and Co’s manager. Prior to their leaving, under the direction of Lloyd’s agent, the tug QUEEN belonging to Messrs Cosens and Co., commanded by Captain Beale was sent out to see if she could be of any assistance in getting the unfortunate craft from her perilous position. On her arrival, however, it was found, owing to the heavy sea running, towing operations would be quite out of the question, in fact, there was far too much sea to permit of the QUEEN approaching anywhere near the stranded vessel with safety. This being the case, and as there was no necessity for the tug to remain in the locality, the manager, Mr. S. J. Fowler, who was on the beach, signalled to her captain to put about and return to Weymouth again which was done. When daylight had at length dawned, and it was considered there was no immediate danger of the vessel breaking up, although the wind was still blowing very fresh from the S.W., and the waves were breaking over the ship both fore and aft, some of the crew were put aboard the steamer again by means of the breeches buoy to secure the men’s clothing, ship’s papers, and other articles which could be easily conveyed to the shore. After this had bean accomplished the goods were stored in the building utilised for keeping the life saving apparatus. During the whole of Friday the steamer experienced a very rough time, and it was generally thought before night set in she would become a total wreck, but these expectations, however, were for once doomed to failure. On the day on which the VERA came ashore there was no attempt whatever made to save any of the cargo; in fact had such an attempt been undertaken the lives of a number of men would have been endangered and perhaps sacrificed, as seas were continually breaking over her, sweeping and regularly deluging her decks. There can be little doubt had the wind remained in the same quarter as it had been blowing during the previous night and following day, and especially with such a heavy sea running, very little of the hull of the VERA would have been seen on Saturday with the exception perhaps of a few of her spars floating about and the beach strewed with wreckage for miles around. Fortunately, however, during Friday night the wind veered round to the N.E., and the unfortunate vessel was once again in comparatively smooth water. On Saturday afternoon operations were commenced for unloading the VERA, Mr. W. Butt, Lloyd’s agent, having entered into a contract with Messrs Cosens and Co., to salve the vessel and cargo. Sometime after the steamer came ashore messages were despatched to London for two tugs to endeavour, if possible, to tow the vessel off from the beach. On Sunday 2 very powerful boats, belonging to Messrs Watkins and Company, of London, arrived in the bay; one of which was a paddle boat and the other a screw, for the purpose of attempting to tow off the VERA, but unfortunately just as they were making arrangements for doing so one of the tugs had the misfortune to loose her propeller, so that the attempt had therefore to be abandoned. The disabled craft was then taken in tow by the other tug and towed probably to London. It is stated the price agreed upon if the tugs were successful in floating the VERA was £2,000, and in the event of the attempt being fruitless they would receive no compensation whatever. There can be no doubt the owners of the tugs were not thoroughly acquainted with the locality in which the stranded steamer was lying, or of the arduous and dangerous task which they were called upon to perform, otherwise they would probably not have undertaken the study unless some different arrangement had been entered into between the respective parties. When it became generally known that an attempt was going to be made to get the vessel off the beach, a large number of people assembled, notwithstanding the unpropitious weather, to witness this novel sight, but much to their disappointment the experiment was not made, for the reason which we have already stated. In spite, however, of the damage which the steamer has sustained, the underwriters are somewhat confident of being able to float her, and for that purpose we are given to understand a very powerful tug is on her way to Portland to make the attempt; but whether her efforts will be crowned with success is a matter of speculation. The opinion of the majority of “old salts” is that she will never move from the position in which she is now lying, until she comes to pieces, which will probably be when the next good stiff southwest gale sets in. Even supposing the attempt to get the VERA off the Chesil Beach into deep water should be successful, then there is the probability of her going down, as there are several holes in her hull. Mr. R.B. Brown, of Dorchester, has furnished one of his monster tents, 200 ft by 60 ft, for the storage of the salvage, together with an office tent and other necessary requisites for looking after the wreckage.

The Wreck of the VERA – Since Tuesday no change has been made in regard to the position of this steamer, day by day the cargo being removed and carefully stored on the beach. We must not omit to state in connection with this vessel, that the crew, after leaving Langton, were conveyed to the Sailors’ Home, where they, received every attention and that the Shipwrecked Mariners’ Society, through their local agent, Mr. R. Damon, assisted the men to their respective homes.