REPORT OF AN INTERVIEW WITH CAPTATN NORMAN SHALTON

CAPTAIN OF THE S.S. DALLAS CITY

We were bound from Southend to Australia via Curacoa with a cargo of 7400 tons of Sulphur of Ammonia in bags. Our hull was black, and superstructure and funnel were buff. We were in convoy and were flying the ens1gn at the time of the attack. We had wireless on board and were armed with 4″ and 12 pdr. The confidential books were put into a weighted bag and thrown overboard. The number of the crew including myself was 37. There were two injured. The vessel was degaussed and the apparatus was in working order.

We left Southend in convoy on the 2nd July at 9 a.m. and proceeded without incident until we were passing Dover on the night of the 3rd. There was evidently an attack of some sort being made on the after end of the convoy as, although I was well in the fore part of the convoy, I could hear the Dover batteries firing and see the shells bursting. I didn’t see anyone hit although one of the Captains has said that one of the planes came down by him. I understand that a parachutist came down, but he escaped, or at least only the parachute was found.

During the morning of the 4th, right from earliest daylight, we saw single planes flying overhead at odd intervals, thought they were Germans as they were coming from the East, and I think they were just getting details of our position.

At about 1300 we were travelling at 8 knots and using No. 10 zig-zag.  We were about 20 or 30 miles S.E. of Portland when, without any warning whatever, there was an attack made by about 20 planes. The attack was not very severe; and although they dropped some bombs not one made a hit. They attacked more to the after end of the convoy, and I think a vessel on the port side of the DALLAS CITY made a hit. There was the BRIARWOOD, the JAPUR and the ELSTREE GREEN which had the Commodore on board. They were all close together and I couldn’t be quite certain which one registered the hit. However, the plane came down lower and lower with smoke streaming from it but I did not actually see it hit the sea. The enemy planes did not stay long – I think the volley of firing drove them off. 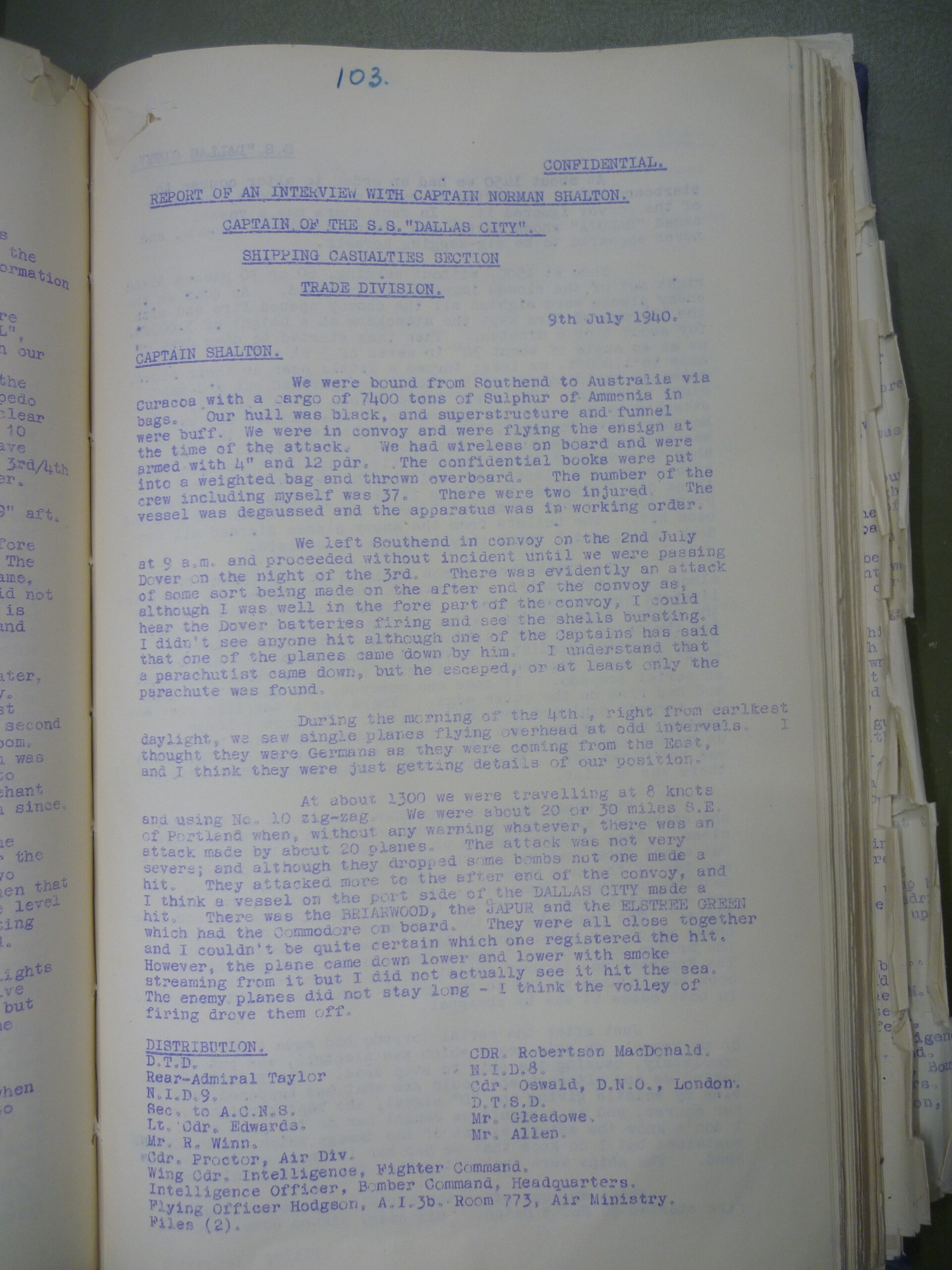 At about 1450 we had an order to alter course to starboard 40 degrees. I started to carry out the order, but some of the convoy ignored it. In fact there was a vessel named “SALUTA” whose master was giving orders at random, and never appeared to be zig-zagging herself.

Then att 1500, without warning, 60 or 7o planes dived right out of the clouds immediately overhead. As soon as the enemy planes were sighted all the convoy opened fire and with the barrage of fire kept the attackers at a height of 3000ft. for about 5 or 6 minutes. Then they started to dive down on us at an angle of about 30 degrees in waves of 3 at a time. They came to 1,000ft. or less; turned a little over on their sides, released their salvos of 3 bombs, straightened out and went right up again. The first three planes which directly attacked my ship machine gunned us. The Gunner who was a Merchant Navy Gunlayer, behaved marvellously. Although he was being machine gunned continuously he continued firing. When they were at their lowest altitude he let them have round after round and placed his shells right in front of them. I think his firing was so strong it drove them up. One enemy plane looked a bit shaky but I could not be certain that it had been hit. The bullets from the enemy planes pierced all the deck rails, and I think they were tracer bullets.

The first three bombs which stuck my vessel came almost simultaneously. One struck and demolished the starboard lifeboat and accommodation. The second one went down through the engine room skylight after having hit the wireless room, and the third one went right down the funnel and exploded. Fires started immediately after all those bombs had exploded. Then the enemy registered a hit with something which resembled an aerial torpedo. It came end onwards, was quite 3ft. long and had fins on the outer edge. There was a terrific roar and the torpedo exploded down No. 3 hatch. It tore a large section of deck away and also the bulwark, and this was blown up by the force of the explosion on to the bridge.  The hatch was not blown off. The ship lifted very badly after this but there was no list.

The enemy dropped many more bombs both on the port and starboard side, but all missed, although some were quite close. They machine gunned us throughout the bombing attacks, but apart from just holing the decks, they did no damage. I and ten of the crew were inside the concrete slabs during the machine gunning. None of us suffered any injury, and even the explosion from the aerial torpedo didn’t shake the concrete slabs. The remainder of the crew were down in the sal00n house which was under the bridge. There was no protection on the bridge but I haven’t heard that any bullets got through. The Engineer was injured whilst in the engine room, and the cook was injured whilst in the galley which was right amidships. In both cases it was by shrapnel.

Just after the aerial torpedo had made a direct hit on my vessel, my ship gear, which was electric, was put out completely, causing the ship to stop dead. The FLIMSTONE was behind me and although she could see what had happened, and blew my whistle giving the “D” signal, she kept straight on her course, and as a result we caught her on the port s1de. I don’t know the actual extent of the damage which the FLIMSTONE sustained but I do know that we had her lifeboat on our foc’sle head. The ships were locked together for about 15 minutes.

About an hour after the aerial torpedo had exploded fire started in No. 3 hatch. S1x enemy planes came back and flying ……… 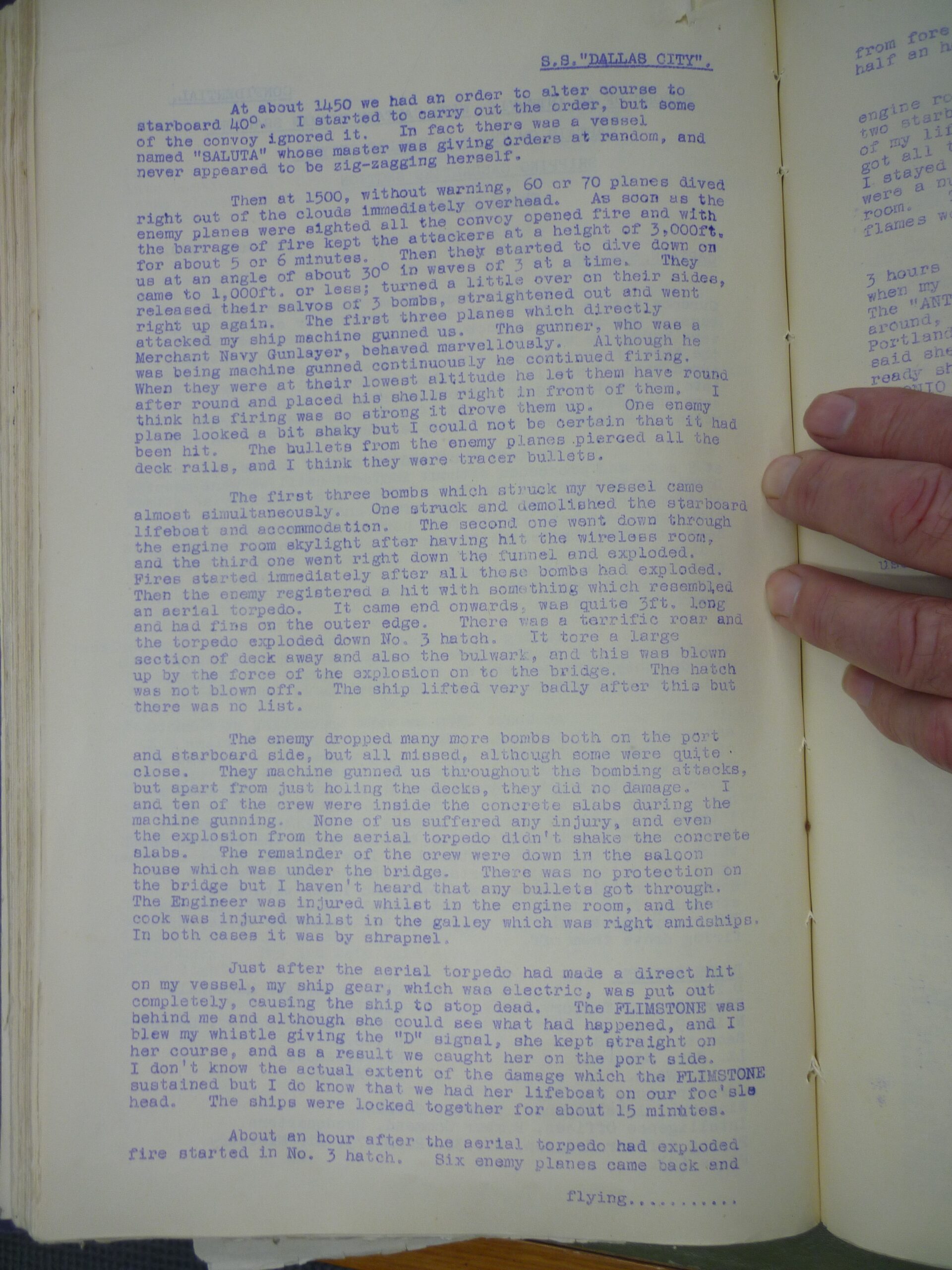 from fore to aft, they machine gunned our decks for at least half an hour.

By this time the fire was spreading rapidly, and the engine room was a mass of flames. Having already lost my two starboard boats I thought it best to get the remainder of my lifeboats into the water before they were burned. I got all the crew into the two port boats and got them away. I stayed on deck until about 1700. During that time there were a number of terrific explosions from the engine boiler room. The fumes from the cargo were getting very bad, and flames were starting t0 come through No. 3 hatch.

I eventually joined my crew and we waited for about 3 hours hoping that the convoy, which had gone on ahead of us when my ship had been disabled would return and pick us up. The “ANTONIO” who had also had been damaged was cruising around, and I shouted and asked her if she was going back to Portland. If so would she stand by to take off my crew. She said she would do so, and whilst she was waiting for us to get ready she picked up the crew of a Dutch Trawler. The ANTONIO then came back, picked us up, and we all returned to Weymouth.

All my crew fought like Britons, particularly the gunner. He took a great interest in his gun. His crew was made up from the deck crew.

The master wishes to bring to notice that when he was last at Middlesbrough and Newcastle certain civilians in the Customs 0ffice asked him about the Naval code that he would use, and both of them appeared to know the actual code in use. 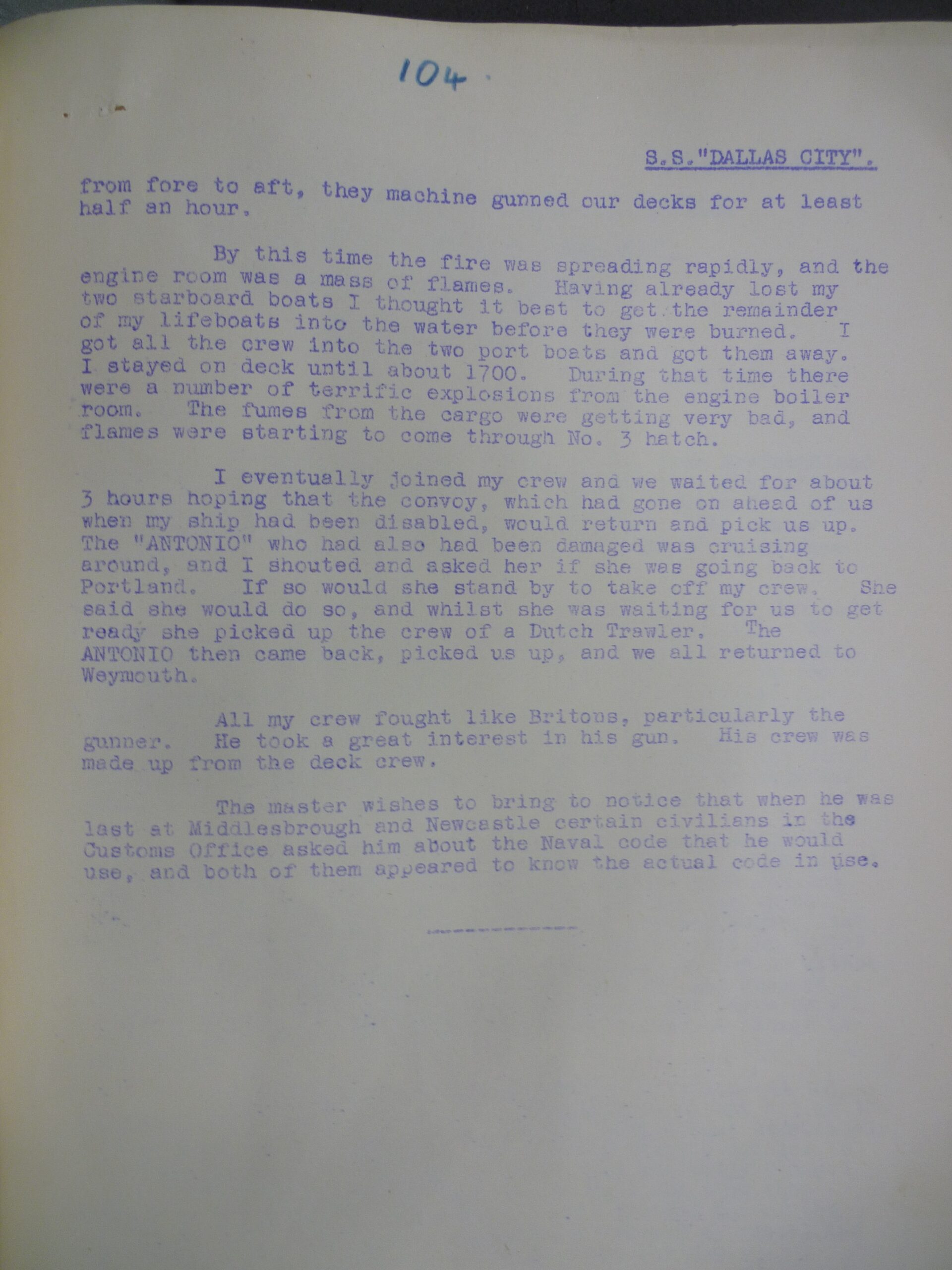