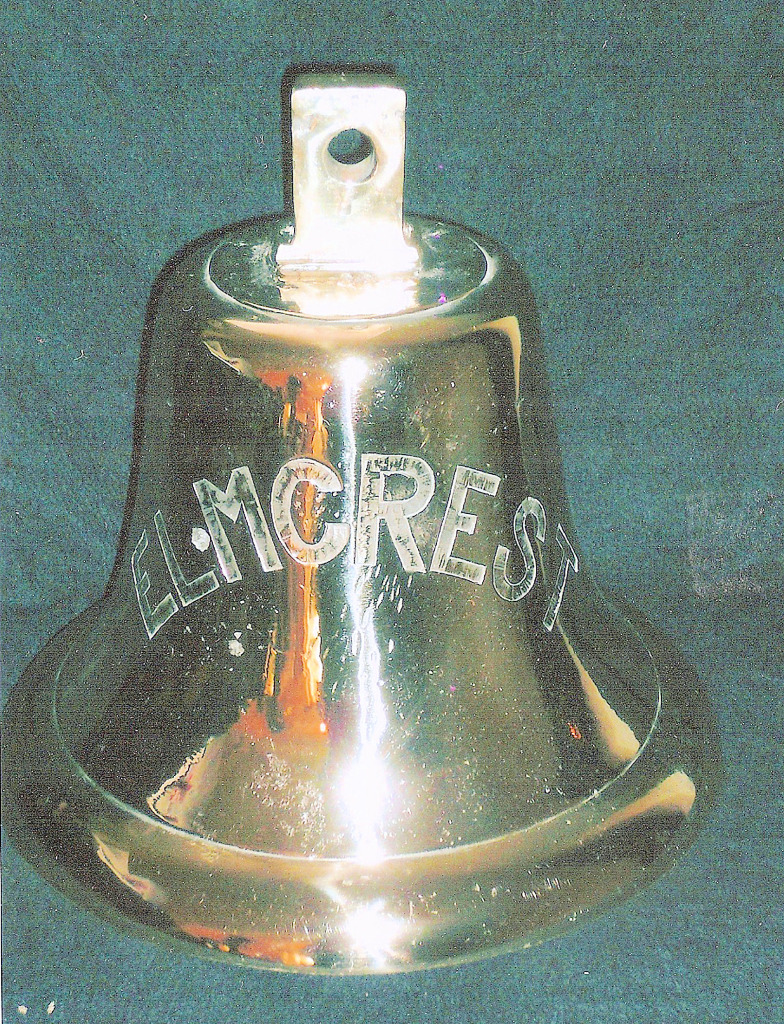 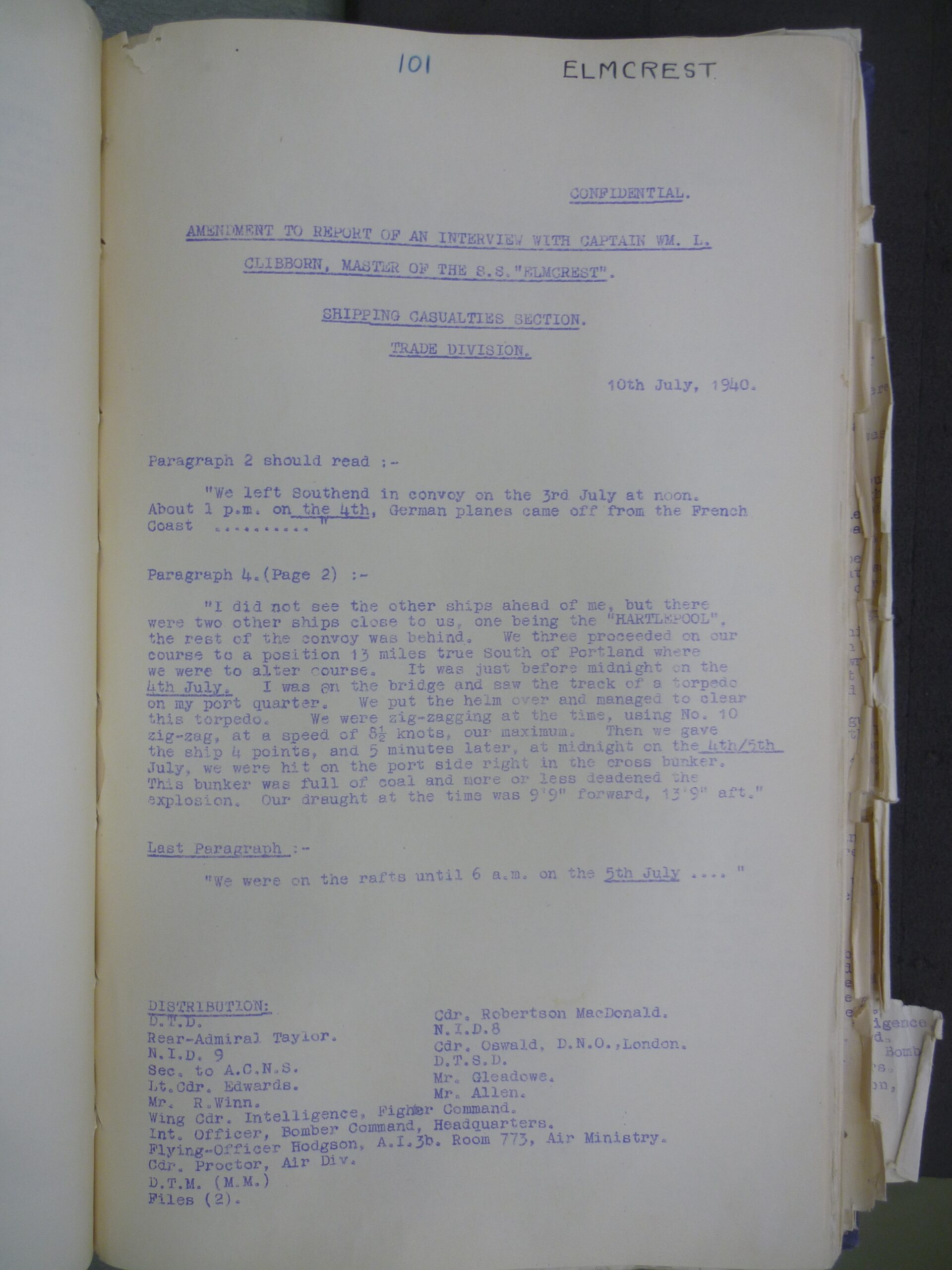 REPORT OF AN INTERVIEW WITH CAPTAIN WM. I, CLIBBORN
MASTER OF THE S.S. “ELMCREST”
SHIPPING CASUALTIES SECTION
TRADE DIVISION.

We were bound from Southend to Newfoundland in ballast. The col0ur of our hull was black, superstructure grey and funnel black. Wireless was fitted and we were armed with a 4″ gun and a Holman Projector. The ensign was fly1ng at the time of the attack. The crew, including myself, numbered 38 of whom 16 are missing and 4 in hospital. All the confidential books were in the weighted bag in the Chart Room and went down with the ship. We were degausscd and the apparatus was working.

We left Southend in convoy on the 3rd July at n0on. About 1 p.m. German planes came off from the French Coast and I saw them drop bombs on one of the ships in the convoy, hitting her bridge. Then the planes flew off. About 3 o’clock 16 German planes returned, attacking the rear end of the convoy which was composed of about 40 ships, 8 abreast, the length of the convoy at that time being about 2 miles. They did not attack the front of the convoy where we were, but a number of ships, including ourselves, opened fire with our guns. We used the 4″ gun; not all the ships in the convoy opened fire, not nearly as many as should have done so in my opinion. I did not see any of the enemy planes hit or brought down. The enemy were not dive-bombing as far as I could see, although they flew fairly low when dropping their bombs. We saw the “KING FREDERICK” and one other ship hit.

At 4 p.m. the Commodore of the convoy signalled with ensign that we were to proceed into Portland. We reached the examination anchorage off Portland at 8 p.m. and were waiting for the examination vessel, when our escort came along and said we should not be allowed to go into either Weymouth or Portland and must proceed on our voyage. We all put our helms over and nothing was said as to whether the convoy had ceased to exist or not. The Commodore went into Portland first and we took it that we were to proceed independently. We opened our secret envelopes and carried on with our route as instructed. By going into Portland we were 40 miles off our route, 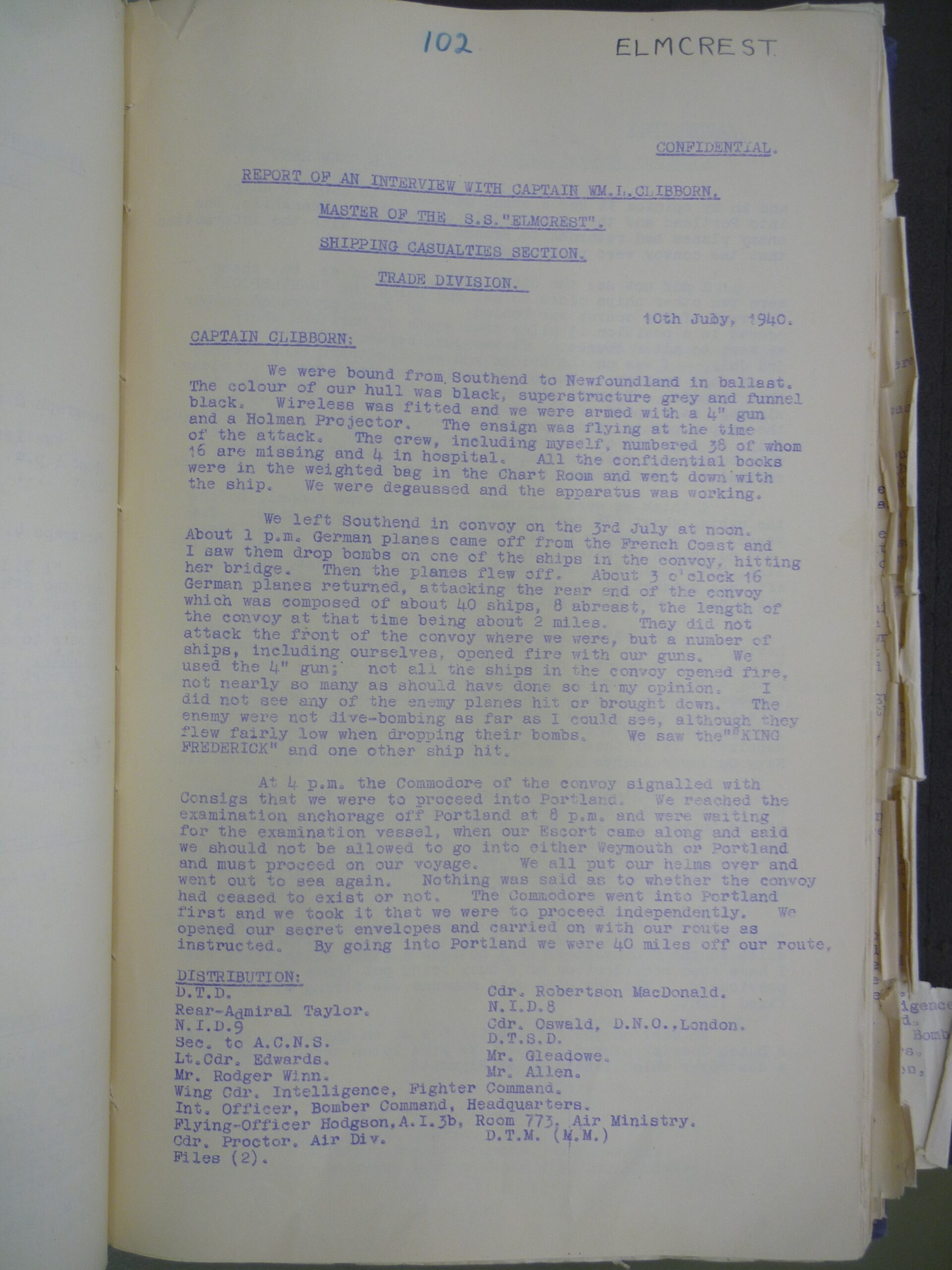 and in my opinion it was a wrong manoeuvre to send 40 ships 1nto Portland and then immediately out again. Meanwhile the enemy planes had returned to France, no doubt with the info hat the convoy were proceeding to Portland.

I did not see the other ships ahead of me, but there were two other ships close to us, one being the “HARTLEPOOL”, the rest of the convoy was behind. We three proceeded on our course to a position 13 miles true South of Portland where we were to alter course. It was just before midnight on the 3rd July. I was on the bridge and saw the track of a torpedo on my port quarter. We put the helm over and managed to clear this torpedo. We were zig-zagging at the time, using No. 10 zig-zag, at a speed of 8.5 knots, our maximum. Then we gave the ship 4 points, and 5 minutes later, at midnight on the 3rd/4th July, we were hit on the port side right in the cross bunker. This bunker was full of coal and more or leass deadened the explosion. Our draughts at the time was 9’9″ forward, 13’9″ aft.

I think we were hit just forward 0f the funnel, before the cabin, about 178 feet from the bow on the port side. The vessel did not appear to be lifted at all, there was no flame, and no splash or water, but showers of coal dust. She did not list, but remained on an even keel. The port boat, which is aft, was smashed by the explosion, but the starboard boat and the 4 rafts were all right.

We immediately lowered the boat and rafts to the water, having no trouble with the falls, and the crew all g0t away.  In less than a quarter of an hour from being hit, I was just going down on to one of the rafts on the port side, when a second torpedo hit the ship on the starboard side in the engine room. This torpedo had passed under the starboard lifeboat, which was just pulling away from the ship, and this caused the boat to capsize. 16 of these men were drowned, including the Merchant Navy Gunlayer Andrew B. Fotheringhan, who has not been seen since.

Both explosions were much the same but the first one was rather dead, the second one being much sharper. After the second torpedo had hit her the ship immediately broke in two and went down each end 1n a matter or seconds. It was then that the men on the starboard side were machine-gunned, from the level of the water, but no one was hit, the men on the rafts getting underneath them for cover.

About the time of the attack we noticed the searchlights from the shore. but they were a good way away. Four or five miles to the Southward of us I noticed a fixed white light but I have some recollection of a buoy being put there some time previously. The 3rd Mate said someone was firing at this fixed ligt.

We were on the rafts until 6 a.m. on the 4th July when a Dutch Coaster picked us up. We were later transferred to a destroyer which landed us at Plymouth. 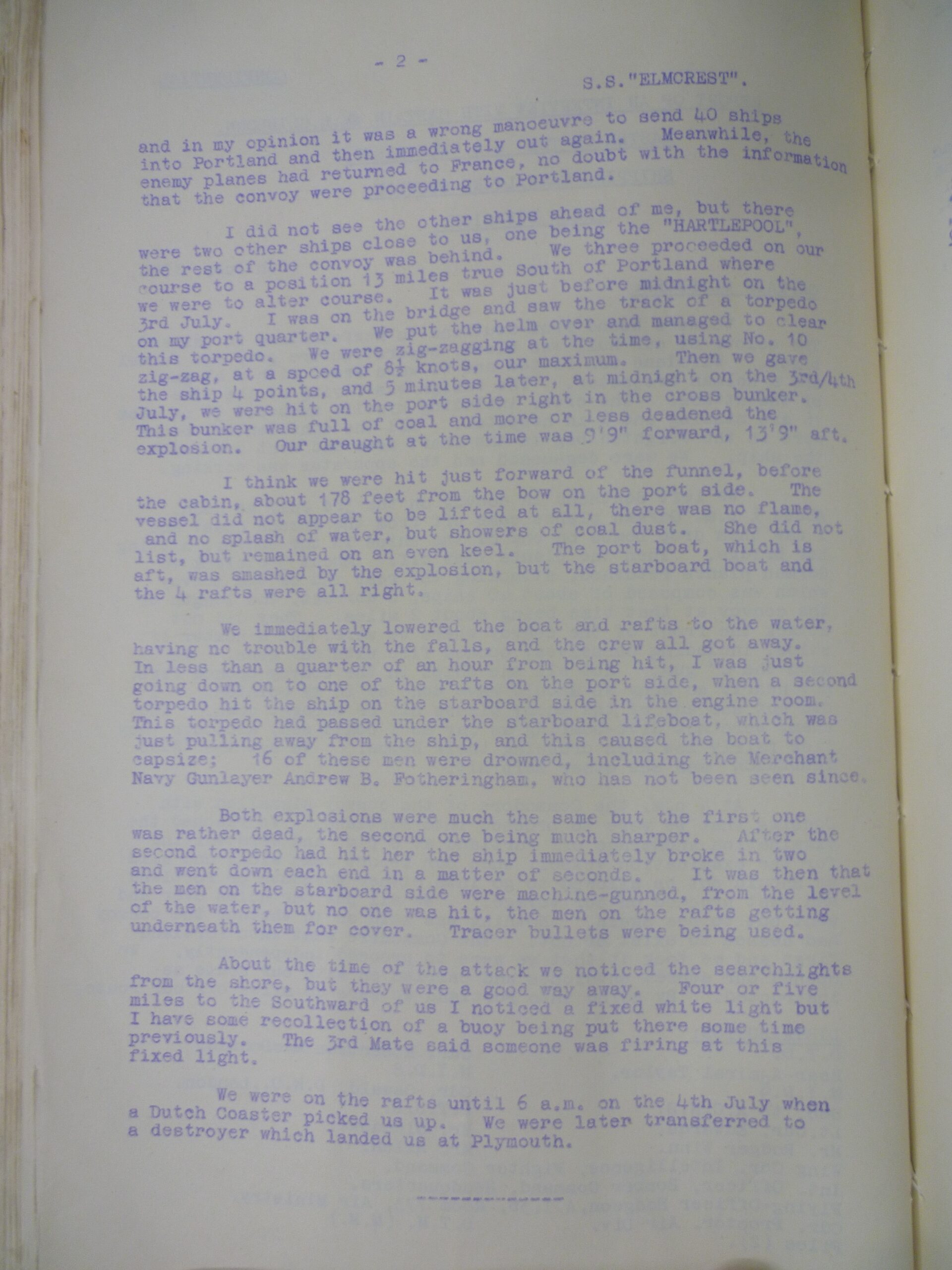