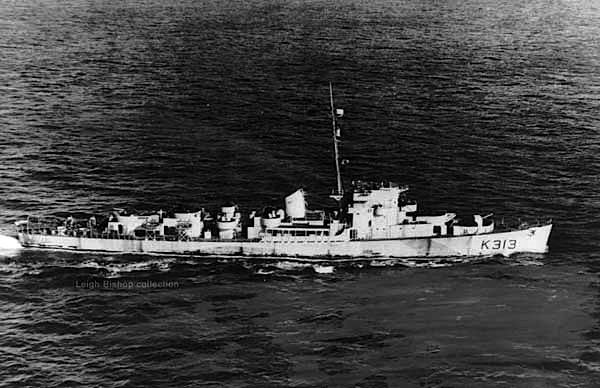 Two days later the frigate Blackwood Lt Cdr L T Sly RD RNR) was torpedoed and sunk by U 764. The Blackwood was part of the 3rd Escort Group. At 1911, when steaming at 12 knots, there was a violent explosion and a dense cloud of yellow smoke hid the ship from view. When the smoke cleared it could be seen that the whole of the forepart of the ship had been blown away, the mast had collapsed and the bridge structure had been flattened back. The Blackwood did not sink at once, but it was clear that she must be abandoned. Two Air Sea Rescue launches HSL 2696 and HSL 2697, manned by RAF personnel, saw the explosion and went to the rescue at full speed. They took survivors aboard, assisted by the frigate Essington. Temporary Surgeon Lieutenant MJ Brosnan RNVR aboard the Blackwood, described in vivid terms what occurred when the ship was hit.

At 1900 hours on the 15th June I was siting on the settee in the wardroom. One of the stewards was laying the table for supper. We were at Cruising Stations and So far as I know nothing out of the ordinary was going on. The sea was calm with a slight choppy wave but no swell and the ship was perfectly steady. About 1905 the phone buzzer rang. Lieutenant Johnson, the Navigating Officer, answered it and left the wardroom. He told me later that the Captain had sent for him.

About a minute later there was a blinding flash, a bang and the sound of tearing metal. On coming to, I was lying in the corner under a piece of the wardroom table The wardroom was full of wreckage and water was pouring over everything. I managed to crawl out and made for an open space thinking that the ship was going down. My senses had partly returned by this time and I saw that the water was coming down from above. I became conscious of a lot of white smoke and a strong smell of cordite. Everything was dead quiet except for the sound of running water. The engines appeared to have stopped. The forward end of the wardroom and all forward of this was blown away. The port side of the wardroom with the cabin leading off were also missing. The plates on the port side were all blown outwards and I climbed round them and got onto the deck further aft. Two bodies were hanging over these plates with blood pouring out of them and were obviously dead.

I then went aft. The deck was littered with debris and in this I saw a three inch projectile which I threw overboard., The binnacle of the gyro compass was lying just outside the galley. Two ratings were lying on the deck in the waist. I examined them but both were dead. Another rating was lying near the depth charge racks. He had multiple fractures of the arms and legs and was also dead.

I then met several stokers and ordered them to go forward and look for wounded people which they did. The Sick Berth Attendant then appeared. He gave me a first aid bag and a supply of morphia. We did not know then how long the ship would stay afloat or if we might not get torpedoed again: so the SBA and myself decided to have everything in readiness for abandoning ship as soon as possible or for transferring to another ship, which might come alongside. I did not carry any wounded below decks for these reasons. We agreed that as the SBA was uninjured and could climb, he should concentrate on getting all the wounded down from the bridge and upper decks and bring them at where I would attend to them. This he did with the help of some stretcher bearers. The more seriously wounded cases were laid down on blankets on the deck in the spaces on either side of the Bofors director housing. They had some protection from the cold evening wind, which had sprung up. It was found to be impracticable to carry stretchers into the after heads on account of the right angle bends. The less severely wounded and walking cases however, were able to shelter here. Most of the injuries were either head injuries or broken limbs. They, were all cold, shocked and soaking wet and thoroughly miserable. I gave morphia to all those without head injury and wrapped them well up in blankets which I had brought up from below. Extra splints, slings and bandages were brought up from the Sick Bay. The only lights below were too small portable hand lamps which came on automatically.

The First Lieutenant was carried aft quite early. He was injured in the back, head and arm and was semi-conscious. He had been found on the Boat Deck between the Oerlikon guns. I was informed that the Captain was lying seriously wounded on the bridge and that the SBA was attending to him. I saw Sub-Lieutenant Renny standing on the deck and asked him if he was all right. He did not reply but stared vacantly in front of him. His face and clothes were black and filthy. He did not appear to be bodily injured so I told a rating to put a blanket around him and take him out of the cold. I later saw him on one of the launches but he did not appear to recognise me or be capable of thinking.

I also saw Lieutenant Johnson twice. He was standing at the waist both times and appeared to be in a similar state to Sub Lieutenant Renny, but was able to say “I am all right Doc.” in a very weak voice. He refused to lie down and gave me the impression that he felt, that there was something which he should do but couldn’t remember what it was. I asked him had anything been done about the Confidential Books and told him to try and find these and also any valuable instruments. A short time after it struck me that perhaps he had not comprehended what I had said to him. So I told a rating to try and find them.

I asked an ERA if the engines could be restarted and the pumps got going but he said he did not think so. So I sent him to find the Chief ERA (I had already been told that the Chief Engineer and four other officers were missing – also the Chief Stoker). I did not see the Chief ERA at any time and as I was fully occupied with my medical duties Concluded that the engines could not be re-started and left it at that. I do know that the forward Engine Room was flooded and that the forward Motor Room must have been damaged as there was a large hump 1.5 to 2 feet high on the deck just above this room and the whole ship was raised at bow and stern. A search party was sent down into the- Seamen’s mess deck under the Wardroom. It was flooded and full of wreckage. Two injured ratings were got, out but the remainder were floating about and were either dead or drowned. One rating was trapped and after a lot of trouble he was released but unfortunately was also dead. The hatches leading down to the forward Motor Room were jammed shut and required crowbars to open them before the occupants could be got out. They were uninjured. At about 2000 hours two Air Sea Rescue launches made fast alongside the starboard side. The wounded were transferred to these as quickly as possible. The more serious cases were put into one of the launches. It was my intention to go ashore with these cases, while the SBA looked after the less serious cases on the other launch. While this was going on the uninjured ratings collected their kits and then got onto the launch with the less seriously wounded.

About this time I saw a Motor Boat from one of the other ships come up to the stern. I did not receive any instructions from them and they left again after a few minutes. I noticed a ship standing off about a quarter of a mile away.

Shortly before we left the ship the SBA managed to lower the Captain from the bridge onto the forward launch. This was a very difficult and lengthy job as the Captain is a very heavy man and was severely, wounded and in great pain; and also all ladders had been blown away. He also lowered the Asdic rating down on a piece of ladder after this. Unfortunately this rating died on the way in. (These two were the only persons left remaining on the bridge after the explosion.) I consider that the SBA did a very fine job and is deserving of full credit for it. He showed great initiative and devotion to duty under difficult circumstances. is

At about 2100 everybody was off the ship except for the SBA and two ratings whom I sent back on board to search for any injured or trapped still remaining who might have been overlooked. The dead had already been carried down to the mess deck and the hatches closed. I did not give any orders to abandon ship, but thought it advisable as I concluded that they were waiting until we were all off before putting salvage party on board and taking the ship in tow.

Shortly afterwards both launches left the ship. She then had a slight list to starboard and the deck forward was about 3’6″ from the water while aft the transom was out of the water with about half of he propellers …. from the Sick Bay, Doctor.”Twas standing on the bows of the launch at the time attending to an injured rating and replied “No, I am all right now thank you.” Something else was said but I did not hear what it was.

Three ratings died on the launch on the way in. They all had severe head and other injuries. There were no deaths on the other launch. Between the two launches there were about 100 survivors and of these about 35 were wounded.”

The Blackwood remained afloat throughout the night, but at 0410 16 June, as the Duck- worth and Domett, joined by the Braithwaite from Portland, closed the wrecked ship, radar contact was lost as she sank out of sight.

Towards the end of June, Major General Collins’ Seventh Corps in Normandy was approaching Cherbourg. The capture of the port was essential to the build up of Operation Overlord. A Task Force was assembled by Rear Admiral Deyo to bombard the German batteries defending the port. There were two bombardment groups:

A force of minesweepers would sweep a channel for the bombarding ships. The 9th and 159th Minesweeping Flotillas of the Royal Navy together with eight US Navy minesweepers made up this force. 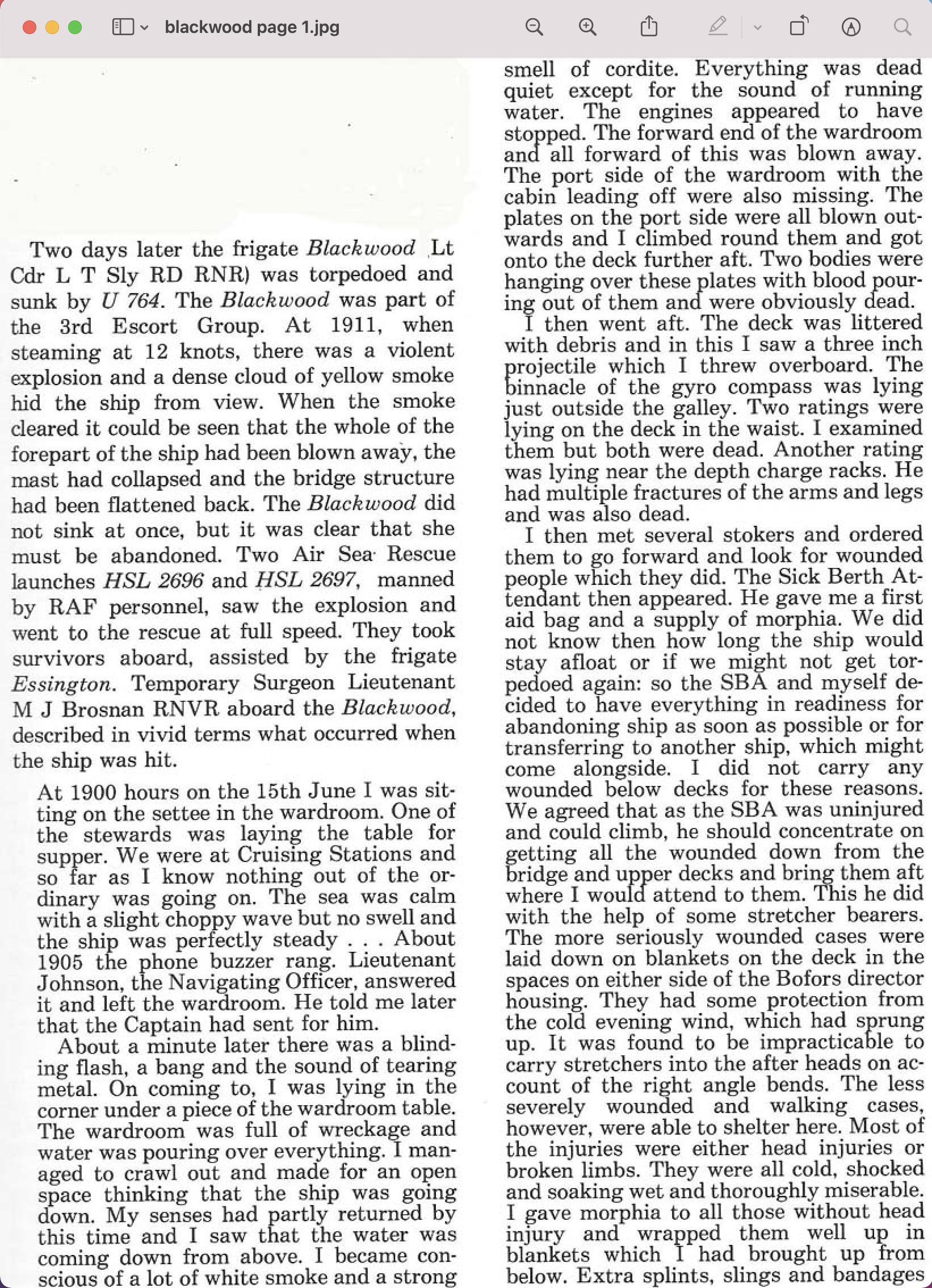 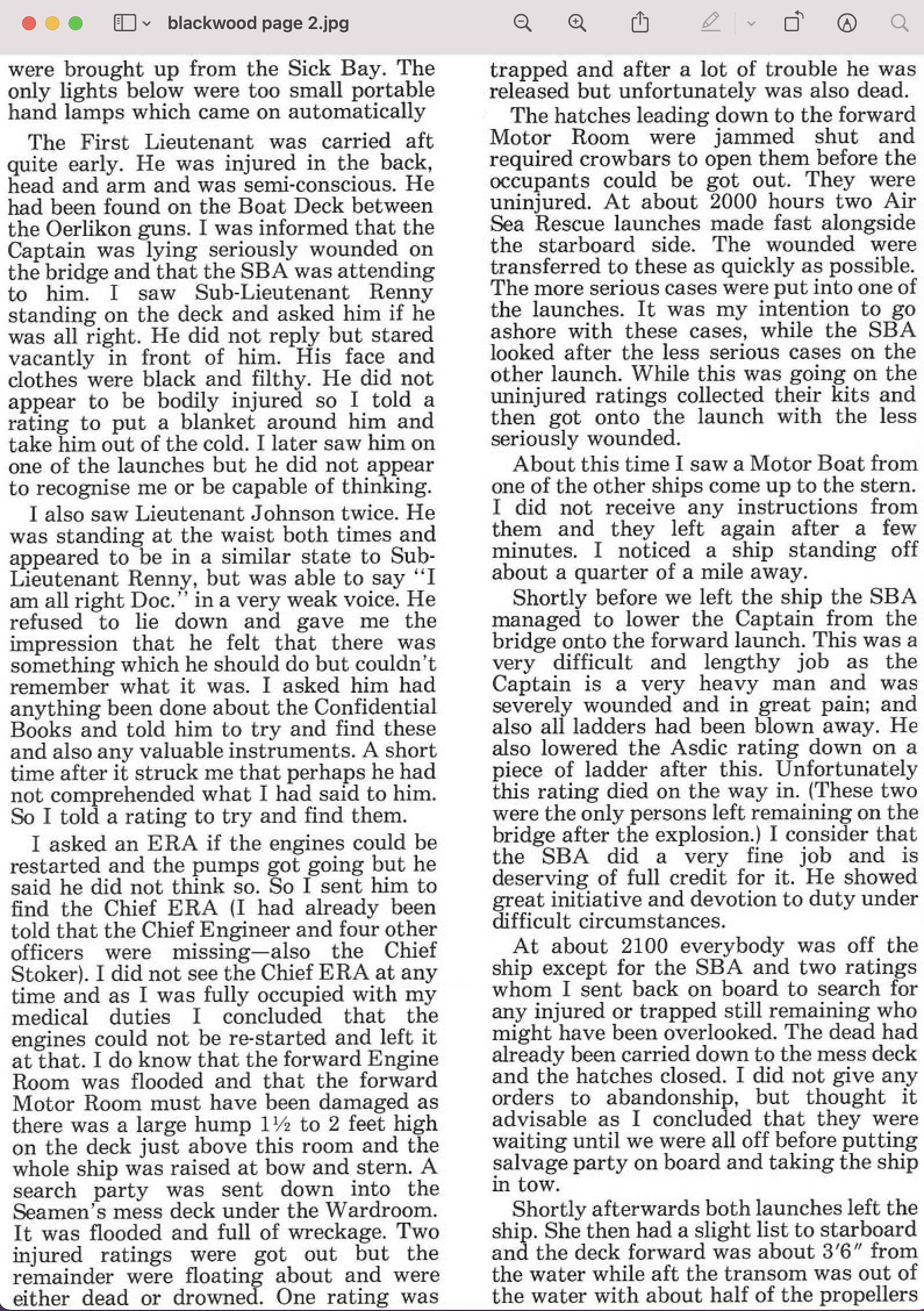 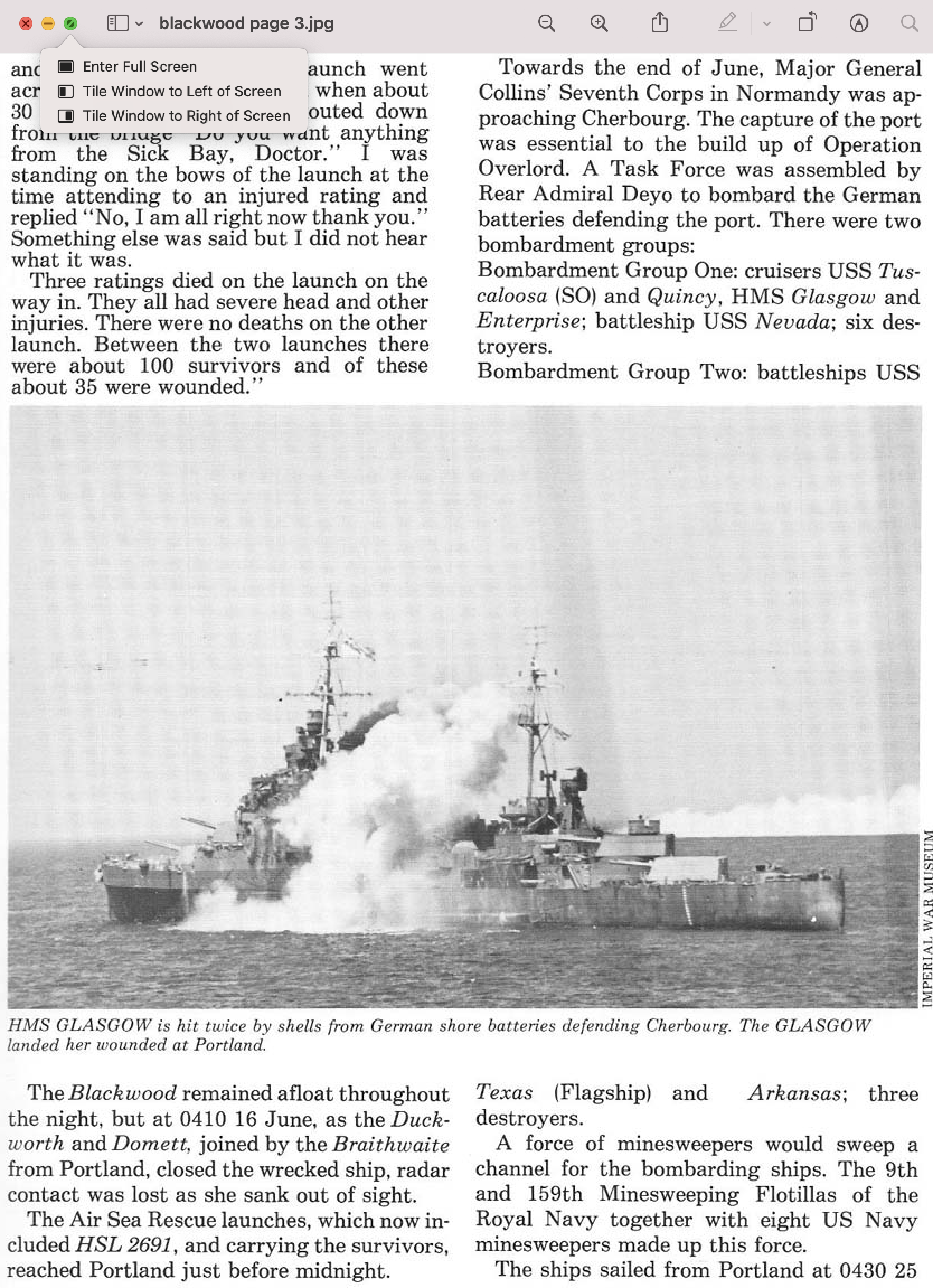