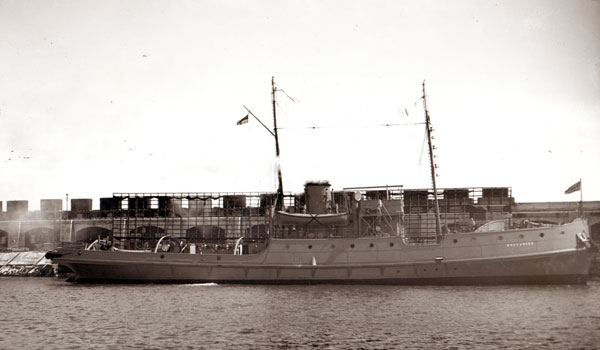 HMS Buccaneer, W 49, a Brigand-class tug of the Royal Navy. Accidentally sunk by HMS Saintes (D84) in 1947 during a gunnery exercise while towing the actual target. When HMS Saintes was first commissioned in 1946 she joined the 5th destroyer flotilla and was used to trial the new 4.5″ Mk 6 twin turret which became the standard destroyer main armament until well into the 1970’s. In 1947, during live-fire trials of the new armament.

Just who was responsible for the appallingly inaccurate shooting of HMS St James, a 2325 ton just- delivered Navy destroyer, during live-ammunition firing trials at a towed target in Lyme Bay?
No one wanted to know. But the captain of the armed Portland Naval Base tug Buccaneer, which was towing the target on that sunny morning of 26 August, 1946, never had any doubts, writes Kendall McDonald.
Soon after a 4.5in shell sank his tug from under him, those who picked him and his crew out of the water were treated to a high-explosive outburst of language of a sort rarely heard even in the Navy.
He pinpointed the four 4.5in guns among the destroyer’s armament as the culprit. The inquiry which followed proved that at least the Buccaneer skipper’s aim was accurate.
The 840 ton Buccaneer was built in 1937 by Fleming & Ferguson. She was 165ft long with a beam of 32ft, and driven by a single screw powered by a three-cylinder, triple-expansion engine.
At the outbreak of WW2 she was fitted with a 3in gun at her bow. It was never used in anger. For most of the war she was a resident tug at Portland Naval Base.