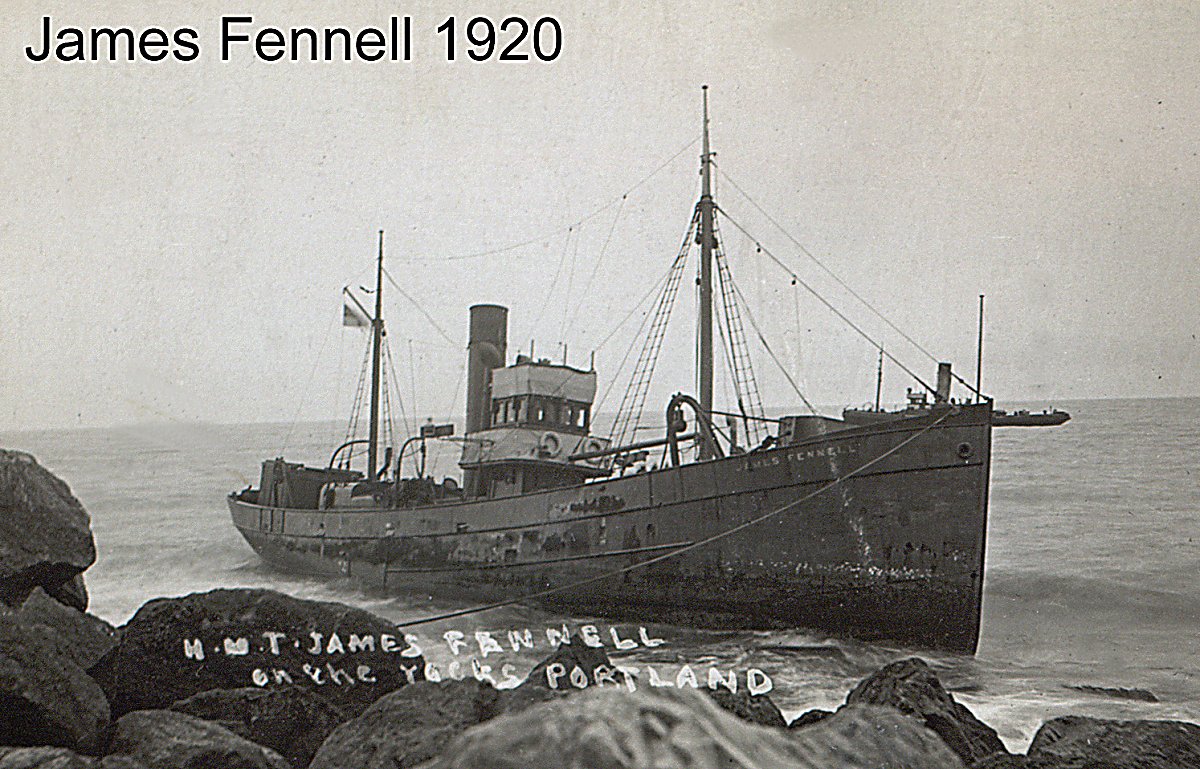 The steam driven admiralty trawler James Fennel was returning east up the English Channel in a thick fog when she ran into the rock below Blacknor. A local man ‘Sunny Sanders heard the shouts from the crew, he attempted to reach the ship but was cut off by the sea. Using another route he manage to get within thirty feet where he got them to throw a rope attached to a hawser. Saunders guided the naval ratings, successful getting all of them to safety. This did not include the Captain however who unfortunately fell into the sea. Saunders bravely jumped in and saved him.

Further attempts were made to salvage the JAMES FENNEL but she eventually slipped into deeper water where she remains to this day. Hincliffe (Dive Doerset) describes the site as follows: “The wreck lies in 15 metres of water and is a very popular dive site. Her stern is still complete and stands almost five metres high above a large propeller. Amidships is her engine and boiler. Her forward end is badly smashed with her bow section detached and twisted, but still in contact with the hull. She faces away from the shore to the west. The wreck lies in Halleluja Bay, between Tar Rocks and Blacknor Point

Note: The 215 ton James Fennel was built by Fullarton & Company at Paisley, Scotland. She was built as one of the Stath class of auxiliary patrol vessels. She was fitted with a triple-expansion engine and armed with a 12 pounder gun.

One man saves 16 from wreck.

Climbed cliff in dark and fog.

Sixteen Lives Saved [From Our Own Correspondent]

By splendid promptitude and courage, Albert (otherwise known as ‘Sunny’) Saunders, a Portland fisherman, succeeded in rescuing, practically unaided, the officers and crew of H M Trawler James Fennell, 16 in number, after their vessel had gone on the rocks near the Blackburn Fort, Portland, at night in a dense fog.

When alarm guns and signal rockets intimated to Portland people that there was another vessel ashore (this was the third wreck in these waters within a week) Saunders, who lived at 24, Well-bay Terrace, Chesil, Portland, set out with only a tiny electric torch, along the rugged coast to try and locate the wreck. He stumbled along over the rocks in almost impenetrable darkness until he reached the further end of Clay Hope when to his dismay he found that he could not go any further, as right in his track was the sea dashing against a perpendicular cliff.

He retraced his steps, and then attempted the hazardous and stupendous feat of getting up the slippery cliff, in black darkness and with a thick fog, with only his torch to guide him. Pieces of rock gave way under him, and he narrowly escaped being hurled to destruction by one falling boulder; but eventually he reached the top, and got down the other side. When within hailing distance of the trawler he shouted through the darkness, “What are you?” Above the roar of the sea came back the reply, “A trawler.”

“Is the ship making much water?” asked Saunders. When told that she was leaking, this intrepid fisherman shouted back, “I can get you off in ten minutes. Don’t get into a boat, but throw me a heaving line.”

The crew threw a line, and ‘Sunny’, wading waist high into the water, managed, after several attempts, to secure it. In this way he was able to pull ashore a stout hawser which he fastened to a rock and which was heaved up tight on a steam winch on board.

Along this line Saunders helped the whole of the officers and crew to safety. The last to come off was the officer in charge of the trawler, Lieut. White, RNR, who missed his hold on the hawser and fell into the sea with the ship’s papers and log. Saunders went in after him, and dragged him to safety, recovering also the log.

Not only Portland people but the Navy at Portland have honoured ‘Sunny’ Saunders for his great act of heroism. On board HMS Orion, flagship of Rear-Admiral Sir Douglas Nicholson, he was photographed with the crew whom he rescued. 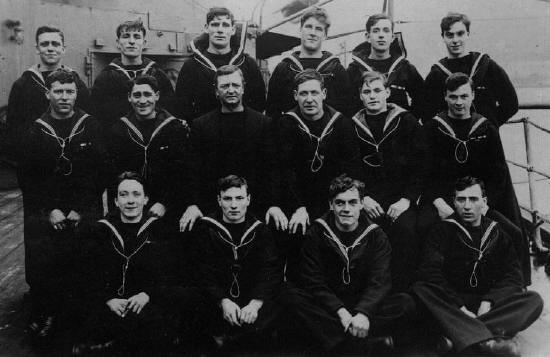 The James Fennel Crew with their rescuer Sonny Saunders. 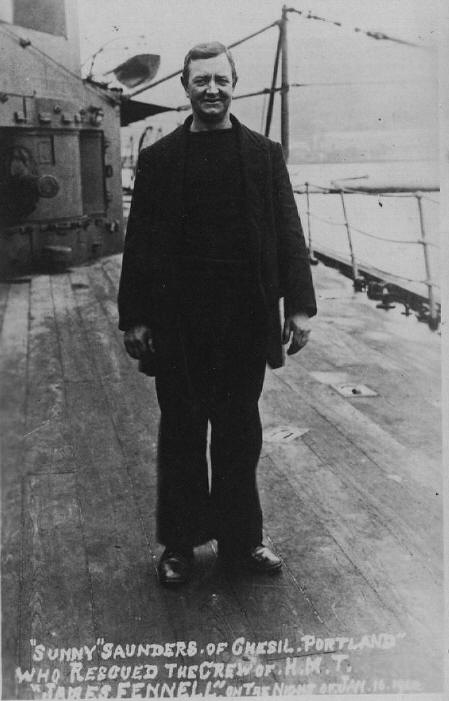