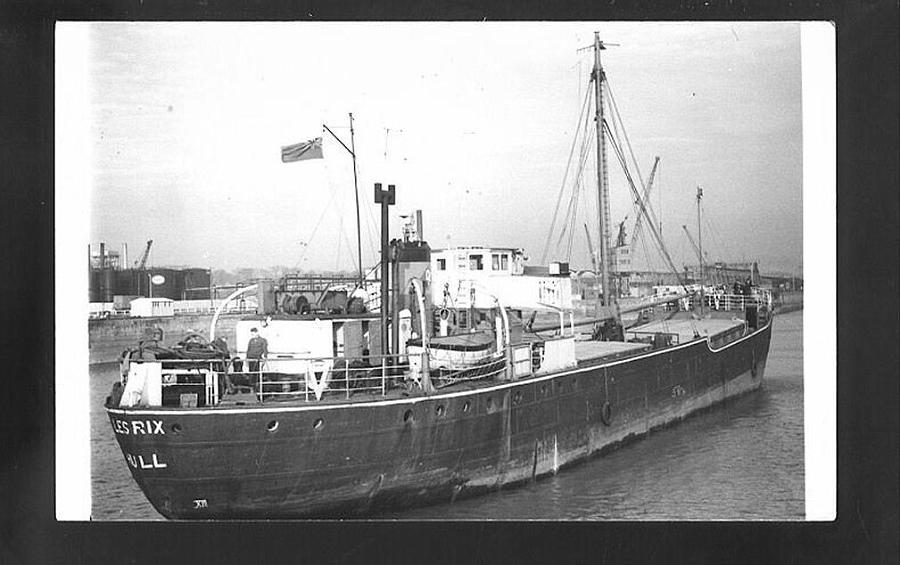 Motor vessel – Captain George Semison. Cargo COAL – Off Portland Bill. LARN ” The 63 year old master of this vessel was a survivor of 300 wartime convoys through the channel, known as ‘Bomb Alley’. During 250 of these his ship had been under attack, or fired at by German coastal guns or E-Boats. He was torpedoed and sunk in at least three vessels, all of which were small coasters. It is presumed that since she had been sighted on 31/10/1960, 15 miles W of St Catherine’s Point but never seen again, and hatch covers lifebelts etc. were washed up on Portland Bill, that she foundered in the storm with all hands. Interesting story, the only reference however, given by Larn is Lloyd’s Register: 1944-5 No. 79409(L)?

Deeper Dorset has learned the wreck of the Lesrix has been discovered in Lyme bay and we are waiting for further news. 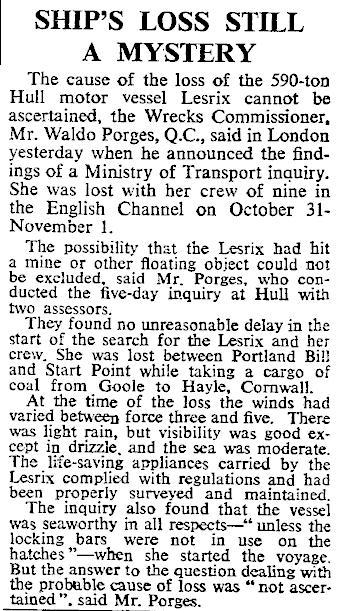 INQUEST CLOSED AFTER A YEAR

The Isle of Wight Coroner yesterday closed the inquest and returned an open verdict on six men who lost their lives almost a year ago.

They were members of the crew of the collier Lesrix (590 tons), which on October 31. 1960, disappeared in the English Channel. She was bound from Goole to Hayle, Cornwall, with a cargo of coal. No trace has ever been found of the skipper and one member of the crew.

The coroner, Mr. J. V. Bullin, said that he had taken the course he did in view of the findings of the Board of Trade inquiry, which had determined that although a number of possibilities, with a mine or other floating object, or collision, could not be excluded, the probable cause of the loss of the collier could never be ascertained.

The Lesrix was lost somewhere between Portland Bill and Start Point. It was stated at the Board of Trade inquiry that it might be assumed that no signals had been sent by the Lesrix because the calamity which had overtaken her had been too sudden.

The cause of the loss of the 590 ton Hull motor vessel Lesrix cannot be ascertained, the Wrecks Commissioner, Mr. Waldo Porges, Q.C., said in London yesterday when he announced the findings of a Ministry of Transport inquiry. She was lost with her crew of nine in the English Channel on October 31- November 1.

The possibility that the Lesrix had hit a mine or other floating object could not be excluded, said Mr. Porges who conducted the five-day inquiry at Hull with two assessors.

They found no unreasonable delay in the start of the search for the Lesrix and her crew. She was lost between Portland Bill and Start Point while taking a cargo of coal from Goole to Hayle. Cornwall.

At the time of the loss the winds had varied between force three and five. There was light rain, but, visibility was good except in drizzle, and the sea was moderate. The life-saving appliances carried by the Lesrix complied with regulations and had been properly surveyed and maintained.

The inquiry also found that the vessel was seaworthy in all respects – “unless the locking bars were not in use on the hatches” – when she started the voyage. But the answer to the question dealing with the probable cause of loss was “not ascertained”, said Mr. Porges.