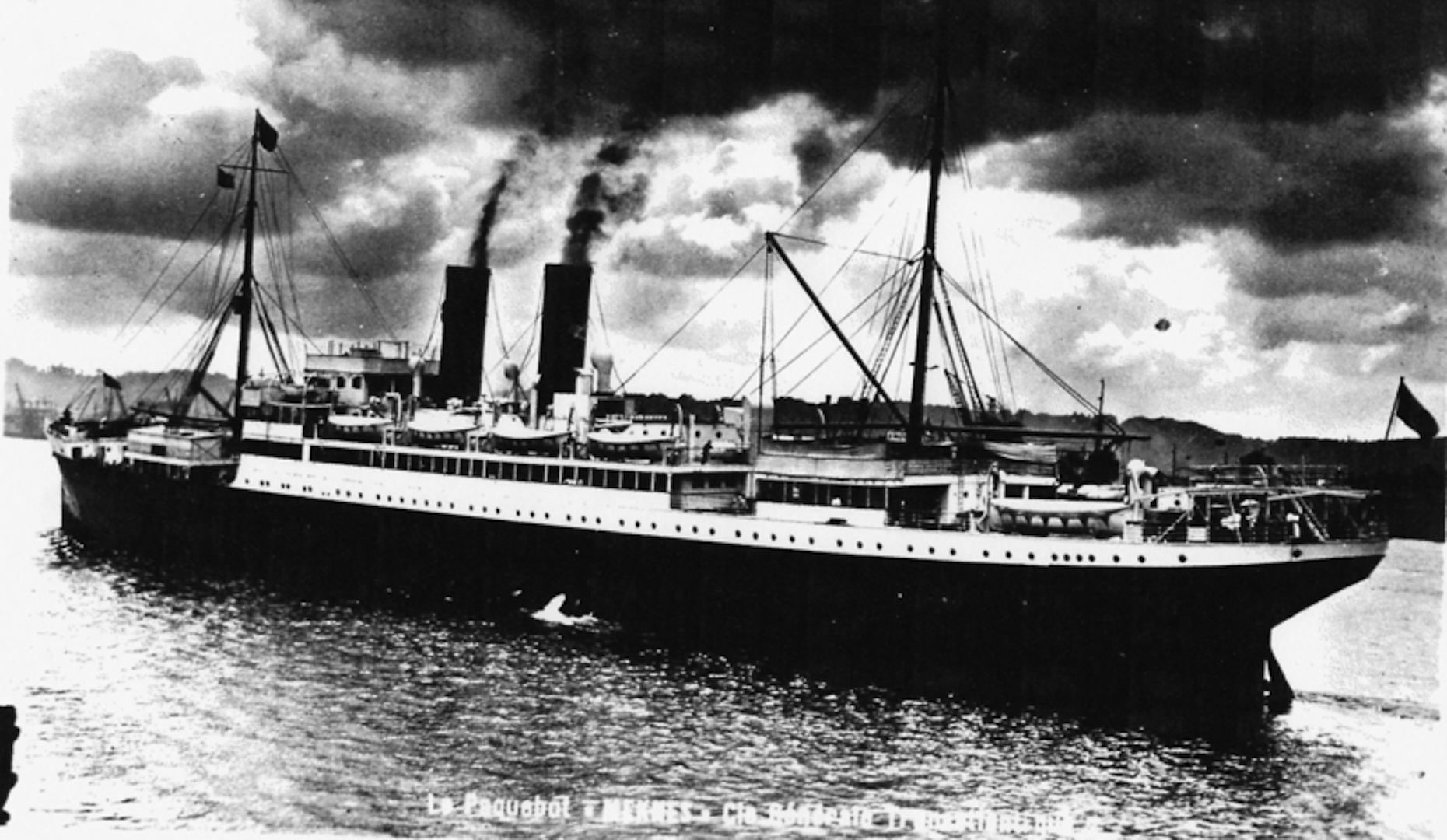 A quick look at the “eu wreck register” describes the wreck as follows: “The wreck is upright but in places well smashed. A debris field runs along the starboard side. The port side is more intact. The bow area is complete and leans 30 degrees to starboard. Much of the wooden decking is still in place. Amidships three boilers can easily be seen. Nobody has yet made mention of seeing any of the bridge structure which may be on the seabed. Depth to the seabed is 60m.” The site also has several images of the ship.  The question as to who was the captain of the E-boat that sank the Meknes is apparently answered in Rohwer and Hummelchen’s “Chronology of the War at Sea 1939-1945” which states that it was Lt Klug of the S27. Bernd Klug was born in Barmen on 12th December 1914. He fought in the Spanish Civil War and later commanded the 1st Torpedo Boat Flotilla (1 Schnellbootsflottille). At the beginning of WW2 he took part in operations against the British off Norway, and from July 1941 to June 1944 commanded the 5th Torpedo Boat Flotilla. He was then given a position on the Staff. Klug was responsible for the sinking of many Allied vessels, and was awarded the Knight’s Cross on 12th Mar 1941 whilst a Kapitanleutnant, for operations in the North Sea, Baltic Sea,and the English Channel. He received the Oakleaves to his Knight’s Cross on 1st January 1944 whilst a Korvettenkapitan, and after the war he returned to active duty and achieved the rank of Flotilla Admiral.

REPORT OF AN INTERVIEW WITH CAPTAIN D. DUBROC,

MASTER OF THE S.S, “MEKNES”

We were bound from Southampton to Marseilles repatriating French 0fficers and sailors. We were unarmed, all the guns and ammunition having been taken off at Southampton before leaving. The crew, including myself, numbered 104 of whom 33 are missing, and we had on board 1180 passengers of whom about 300 are missing. The ship was not de-gaussed.

We left Southampton bound for Marseilles on the 24th July, 1940 ab0ut 4.30 p.m. and proceeded without incident until 2255 when, in position 50 4′ 10″ N, 02 14′ 30″ W, we were surprised to hear a burst of machine-gun fire coming from fairly close on the port side; some of the bullets hit the ship, others passed overhead. They were tracer bullets of a red colour, and it was possible to see the point from which they were fired. I immediately stopped the ship, thinking it was a patrol boat, and indicated that I was stopping by two prolonged blasts on the whistle. At the same time we tried to make known our identity by signalling with the morse lamp, to the ‘patrol boat’. No notice was taken of the whistle except a fresh burst of machine-gun fire, several bullets hitting the bridge.

At 2305, that is ten minutes from the first firing, we were struck by a torpedo on the port side between Nos. 3 and 4 holds, about 276 feet from the bow. There was only one explosion, which was not very loud, no torpedo track was seen, there was no sound as it travelled through the water, and no flame when it struck;  only a little water was thrown up. All the light went out, the electric current having been damaged, but we were able to send out a distress signal by the auxiliary wireless.

I at once gave the order to launch the boats. The ship began to go down slightly by the stern, then sagged at the point where the torpedo struck, by the after accommodation, and the bow and stern rose slightly out of the water. Soon after this she broke in two and within 8 minutes of being hit the two ends sank and the vessel completely disappeared. I do not know if the side of the ship was holed or or split, as she sank so quickly. 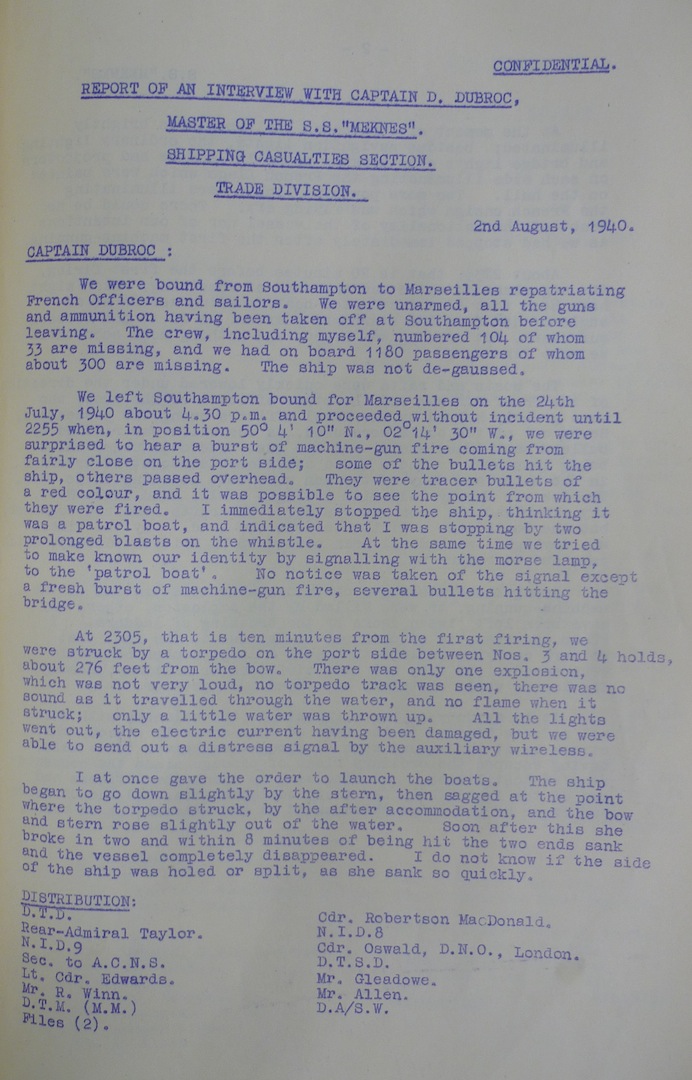 A the moment of torpedoing the vessel was brightly illuminated; besides navigation lights, the ordinary lighting and bridge lights were working normally, and we had projectors on each side illuminating the French flags which were painted on the hull.  Two more powerful lights were illuminating the French ensign which was flying aft. There could be no doubt of the nationality of the vessel nor of our intentions as we had stopped immediately after the first machine gunning.

About 2235, that is 20 minutes before the first firing, the signalman on watch saw the wake of something, which might have been that of a fast motor boat, passing astern at an angle of 45 from our starboard quarter, as if it had crossed our stern, but nothing was heard, and nothing was seen until we were fired at.

The boats and rafts were quickly lowered under the direction of the Chief Officer and the other officers of the crew, who were greatly helped by the Naval Officers among the passengers. Seven out of the ten boats were used as one which was riddled by bullets sank immediately, and two must have overturned whilst being launched. There was a considerable amount of wreckage in the water and many of the men were able to cling on to this. The sea was fairly calm with a slight swell, wind light N.W. sky clear and the moon was rising. The rafts remained together but the boats made a little towards the land. By the time it was daylight, we had all been picked up by British warships which came out to rescue us.

Among those missing a certain number were victims of the machine-gunning, or were killed by the explosion, others may have been left ‘tween decks by the breaking of ladders. I would add that, in my opinion, it was due to the fact that  we were carrying sailors that such a large number of people were saved; if they had been civilians or military passengers the losses would certainly have been much greater.

It is my duty to pay a tribute to the calmness with which all my crew behaved in the face of this cowardly attack, which struck us at the moment when we thought ourselves quite safe, having escaped the ordinary risks of passage since the commencement of hostilities. I also wish to thank the Officers and men of the French Navy for their collaboration, and the Officers and crews of the ships which saved us and welcomed us on board. 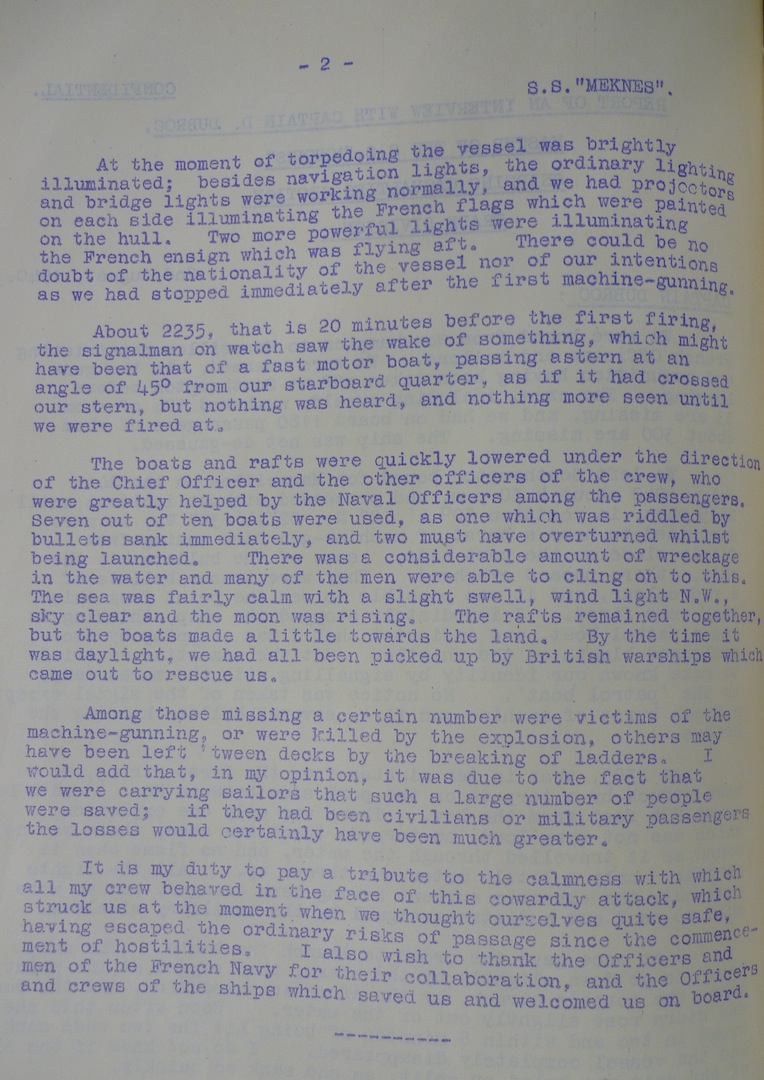