The eastbound coastal convoy WP-183, escorted by the destroyer Brocklesby was in Lyme Bay between Dartmouth and Portland when the 2nd S-Flottille with 7 E-boats attacked shortly after midnight on July 9-1942. Rosten, on a voyage from Barry (departed Barry Dock on July 7) to Shoreham with coal was torpedoed, port side, by S-109 (Cmdr. Dross) at Ol:45 and as she sank immediately, the people on board had to Jump overboard. A couple of hours later 9 were picked up by the destroyer and taken to Portsmouth, while the captain?”, the 2nd mate, the 1st engineer, the steward., and Stoker Torgersen were picked up by the British steamer Giripfast. The E-boats sank 5 merchant ships and an escort trawler (I’ve read that this was in fact a Norwegian whaler) before they withdrew, but at dawn the convoy was again attacked, this time by aircraft. Gripfast got two direct hits and sank, 2 of the previously rescued Norwegians were killed on board, namely the Ist engineer and the steward who had gone down below, while the other 3 who had remained on deck in the galley ended up in the sea again, 2 of whom were rescued by a Dutch steamer and taken ashore. Captain Tollisen was aided by another man who had a lifevest on, but as it took a while for help to arrive, Tollisen told the man to let go of him and save himself.

*The information that the captain was among the 5 rescued by the British steamer comes irom an article about him written by Søren Brandsnes (in the Norwegian magazine “Krigsseileren”). This article also includes the details about the captain being assisted by another one of Rosten’s men after ending up in the water when the British steamer was sunk. However, when including the captain among the casualties from Gripfast, the numbers don’t add up correctly, if 9 were picked up by the destroyer and only 2 survived from Gripfasť’s loss, we end up with ll survivors instead off 12 – perhaps 10 were picked up by the destroyer, or maybe a total of 7 died, as stated by “Nortraships tflte”? 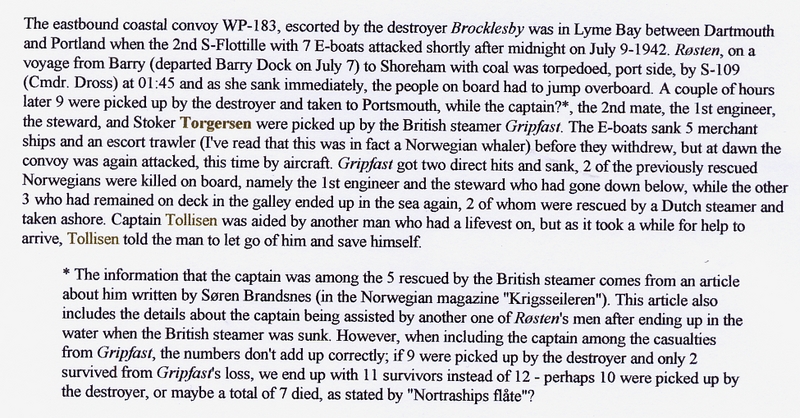