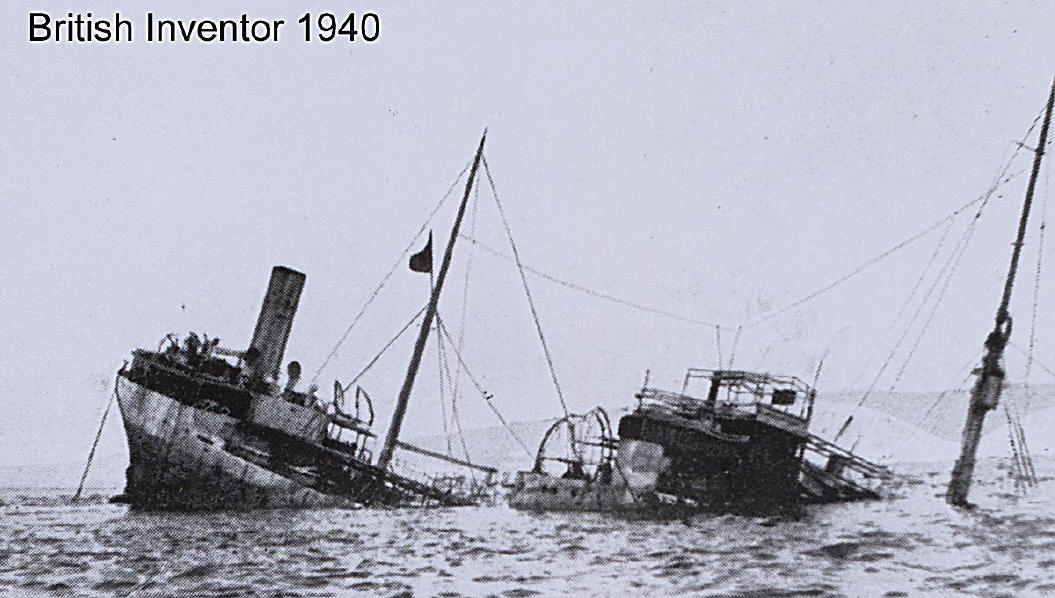 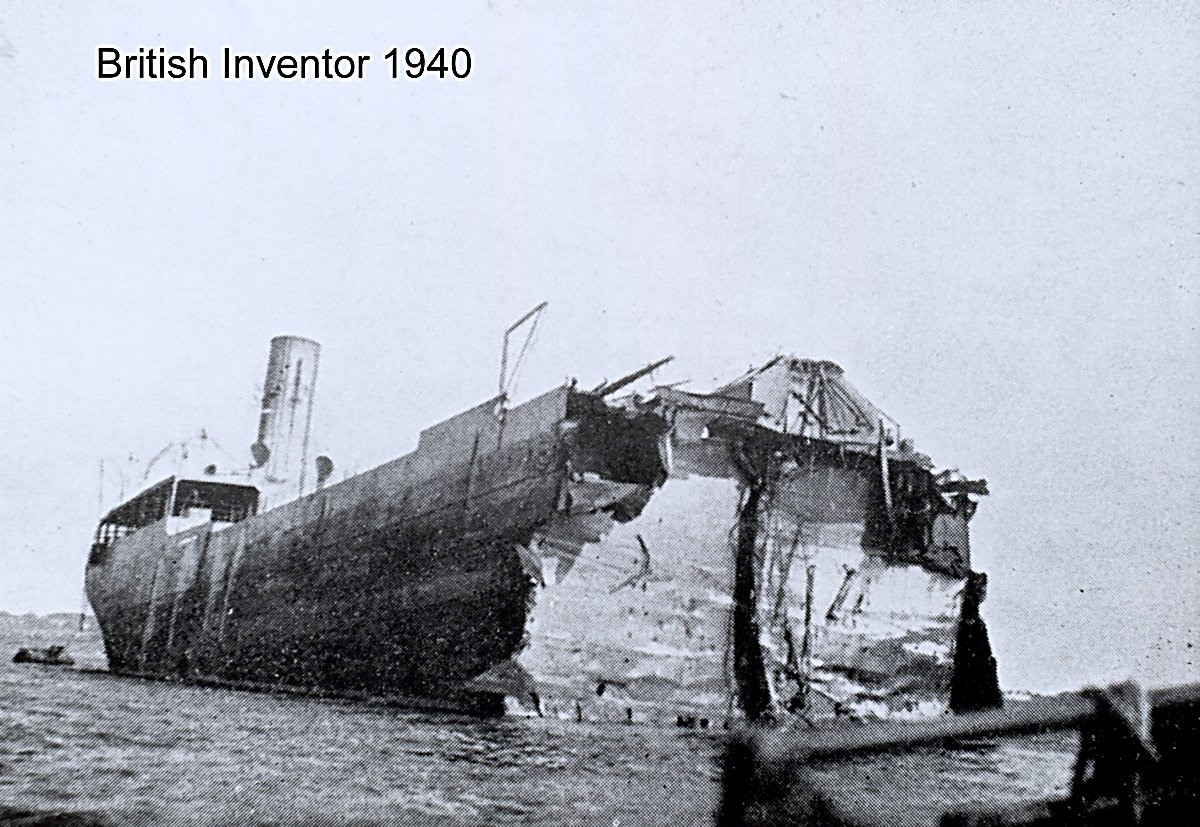 REPORT OF AN INTERVIEW WITH MR. W.P.BOOTH, CHIEF OFFICER OF THE S.S. BRITLSH INVENTOR

We were bound from Gibraltar to Southampton, via Portland, with a cargo of 5000 tons of gas oil. The colour of our hull was grey, superstructure and funnel buff; wireless was fitted and we were armed with a 4″ and a 12 pounder. The ensign was flying at the time of the explosion. The crew, including myself, numbered 44, 0r whom 10 were injured, the Captain being one of them. With regard to the confidential books, as far as I know these were thrown overboard in the weighted bag. The secret envelopes were taken ashore. We were not degaussed.

We left Gibraltar at 1900 on the 5th June bound for Land’s End, but during the passage we received orders to proceed to 8outhampton via Portland. 13th June. Nothing occurred until the came on watch, and at about 0700 B.S,T. We were slightly W. of the course we should have been on, steering N.N.E. THen we were hailed by a Patrol Vessel which came alongside and told us we must wait to go in with the Sweepers. He told us to wait 5 miles 155 from Chiswick Point. He steamed off, but I could not find Chiswick Point on the chart. We saw the position where we were originally routed so we steamed a little further, then the Patrol Vessel signalled with his Aldous lamp for us to stop. We therefore stopped the engines. I took a bearing and we were setting W., so I put the engines at half speed to come round on her starboard helm.

Ten minutes later, at approximately 0710 B.S, T., when in position 6 1/2 miles East of the Shambles, 5 miles from land, we were hit. I was in the port wing of the bridge at the time. At first I thought the wing of the bridge was under water by the amount which came down on the bridge. I was thrown to the deck by the explosion; I picked myself up as the Captain came round from the starboard side. We did not know whether it was a mine or a torpedo then. The ship had immediately listed about 10 to port, this list steadily grew worse.  I think we were struck 1n No. 3 or 4 tank, slightly on the port side, about 120 feet from the bow.  The lid of No. 3 tank on the port side was blown completely off. (All tanks were filled). The bulwarks on each side were bulged and she was awash amidships. The fore and aft gangways were buckled, the corrugation extending for about 20 feet. The deck was broken abaft the bridge.

There was no previous noise of any kind, and the explosion did not seem to me to be very loud. The water and oil that came down on deck was quite 3 feet deep, and I think this came up on the port side. There was no smoke, flame or 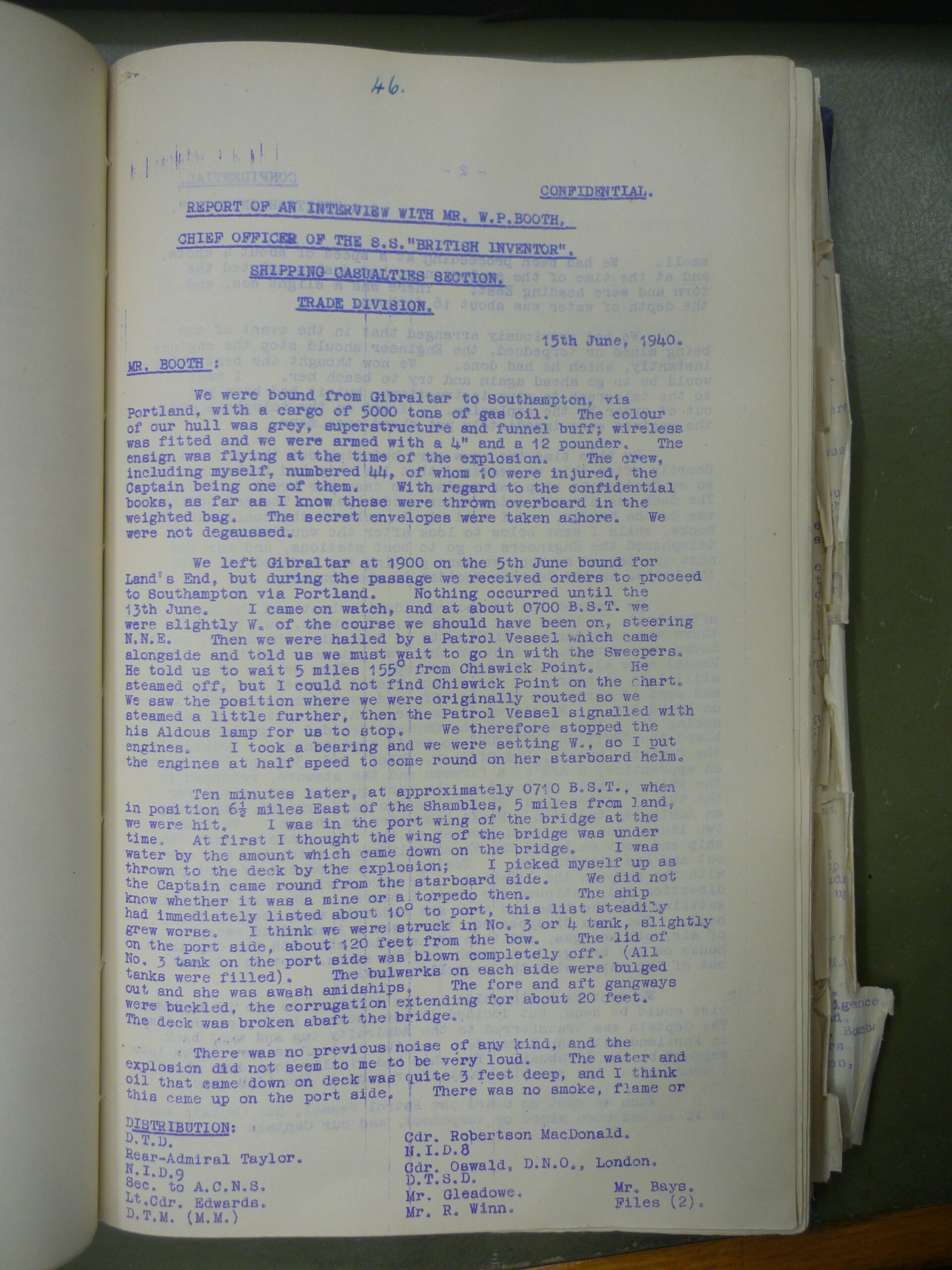 smell. We had been proceeding a a speed of about 4 knots and at the time of the explosion we had just completed the turn and were heading East. There was a slight sea, and the depth of water was about 18 fathoms.

We had previously arranged that in the event of our engines being mined or torpedoed, the Engineer should stop the engines instantly, which he had done. We now thought the best thing would be to go ahead again and try to beach her. I went to the telegraph to give instructions, but it had been put out of order by the explosion. I g0t on the telephone and the engines were immediately put ahead once more.

By this time the crew were bringing out the injured men. Shortly after this we realised that the ship had broken her back, so we decided to stop her engines in case she broke in two.  The deck was already under water amidships. The 3rd 0fficer was on the bridge, and I told him to collect the confidential books, while I went below to look after the wounded men. I telephoned the Engineers t0 go to boat stations, and for the next quarter of an hour we were getting the injured men into the boats, as the Captain decided to abandon ship.

We lowered the starboard midships boat and the port after boat; I was busy elsewhere, of course, but I believe there was considerable difficulty in launching the boats, as the hooks were caught. Most of the crew got away and then a Patrol Vessel lowered her motor boat and sent it across to take us off, and everyone was safely taken on board her. We stayed there for a while, sent out a message asking for a tug and then the Captain decided to go back on board the “BRITISH INVENTOR” to await assistance. Eventually he Captain, myself, 2nd officer, Chief, 2nd, 3rd and 5th Engineers, an apprentice, 2 A/B’s, a fireman end the steward, returned to the ship, climbed on board on the port quarter and waited for the tug. After about 20 minutes two tugs arrived, one being an Admiralty tug with a Naval Commander in charge. We fixed two lines, one from each quarter to the tugs, then we left the ship and went on board the Weymouth lifeboat which had now come out and was standing by.  Towing was started and we kept pace with the ship in the lifeboat. We were towing in an E.N.E direction and continued for about 2 hours. She was gradually settling all the time and then she suddenly went down by the head. The bows disappeared, there was a tremendous escape of air, oil and gas, and then she settled aft with the Captain’s house on the bridge just awash and the stern, from No. 8 tank out of the water with the propeller showing.

We went back alongside in the lifeboat to see if anything else could be done but decided it was useless to try at the time. The Captain was transferred to the Admiralty tug and went back to Portland with the Commander, and the rest of us were taken into Weymouth by the lifeboat. The ship had finally gone down about 5 hours after she was hit just after noon on the 13th June.

When we went on board the Patrol Vessel her Captain asked us if we had been mined or torpedoed, and our Captain said 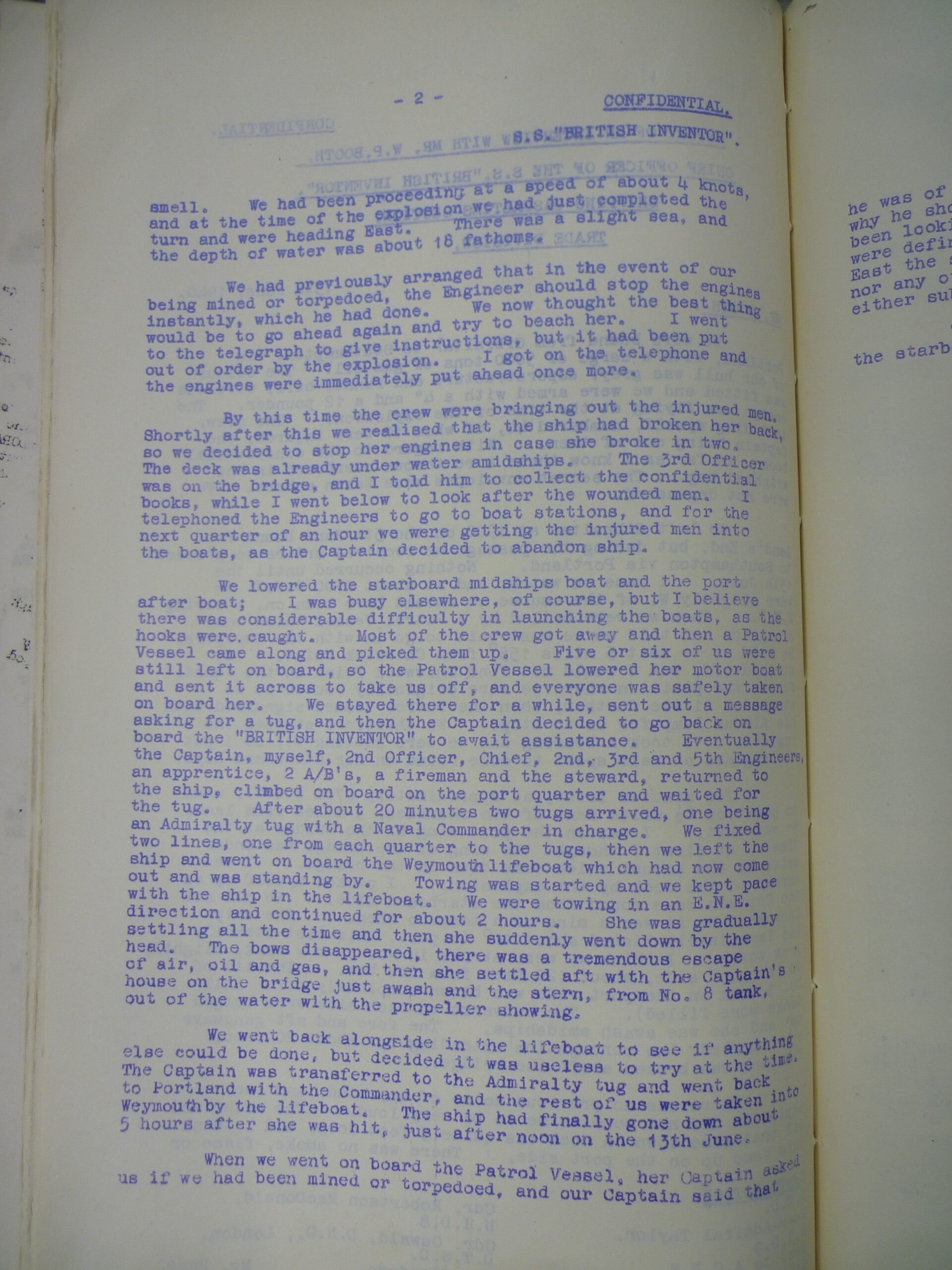 he was of the opinion that it was a torpedo; I do not know why he should have thought so. I was on the bridge and had been looking over to port with my glasses at the time.  We were definitely hit on the port side, and as we were heading East the submarine would have been inside us; Neither I, nor any other member of the crew, saw any sign or track of either submarine or torpedo.

The ammunition was kept in a small locker aft, on the starboard side. 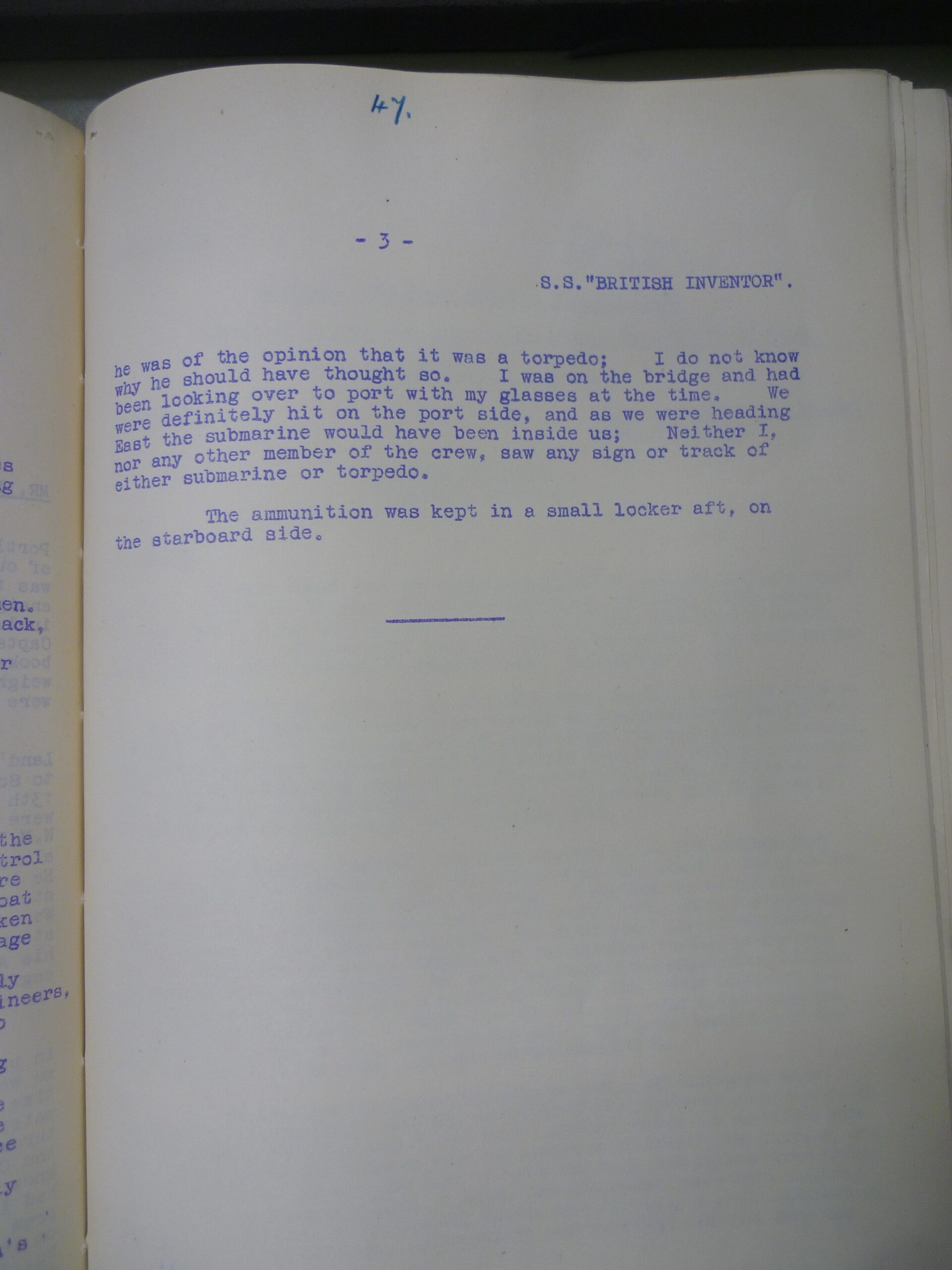