Skip to content
S.S. DAGMAR REPORT OF AN INTERVIEW WITH THE CHIEF OFFICER MR. WINSLOW

We were bound from Dartmouth to Poole with a cargo of 1,115 tons 0f coal. We were armed with 3 Lewis guns, 2 Hotchkiss 2 P.A.C rockets and a kite. The confidential books went down with the ship. The number of crew, including the Master and 4 Naval Gunners, was 21, of whom 4 were injured, two killed and one has since died in hospital.

We left Dartmouth on 9th June about 0630. We were in convoy until 1100 on the same day when we lagged behind  owing to engine trouble.

At 1130 on 9th June, when we had dropped about 5 – 6 miles astern of the convoy, four planes approached us from the starboard quarter, flying at a height of about 200ft. and when they were first sighted were about 2 miles off, flying in two pairs. We were steering E. by N. at the time there was a slight haze with low clouds, se sea was calm, with wind S.E. force 1 – 2. I was on the bridge at the time and the ‘planes, which proved to be enemy aircraft, (I think M.E. 110’s) commenced to machine gun us as they approached, and we immediately opened fire on them with all our guns, except the port Hotchkiss gun, which could not be brought to bear. One paid of ‘planes flew over the ship and dropped 4 bombs – 2 fell into the water on the starboard side and 2 on the port side. The two ‘planes then circled round, one went round the bow and one round the stern, the one which went round the bow came back and dropped a bomb which fell just astern of us. The other pair of ‘planes raked us with machine-gun fire.

Immediately after the attack a French Chaser came up and asked if we had suffered any damage. He said that he would stay beside us, but this was not possible as the Chaser was called back to the convoy.

At 1635 when in a position 029 degrees Anvil Point 5 miles, we were again attacked by a similar type of aircraft. The ‘planes appeared about 2 – 3 points on our starboard bow flying very close together about 20 feet from the water.  As they approached they machine gunned us, injuring 2 Gunners and we immediately replied. Four bombs were dropped, one went through the bunker hatch on the port side, blew up the boiler and broke the main steam pipes. Another bomb went through the boat deck and the two other bombe fell into the water on the port side. The ‘planes then circled round the ship, machine gunning us all 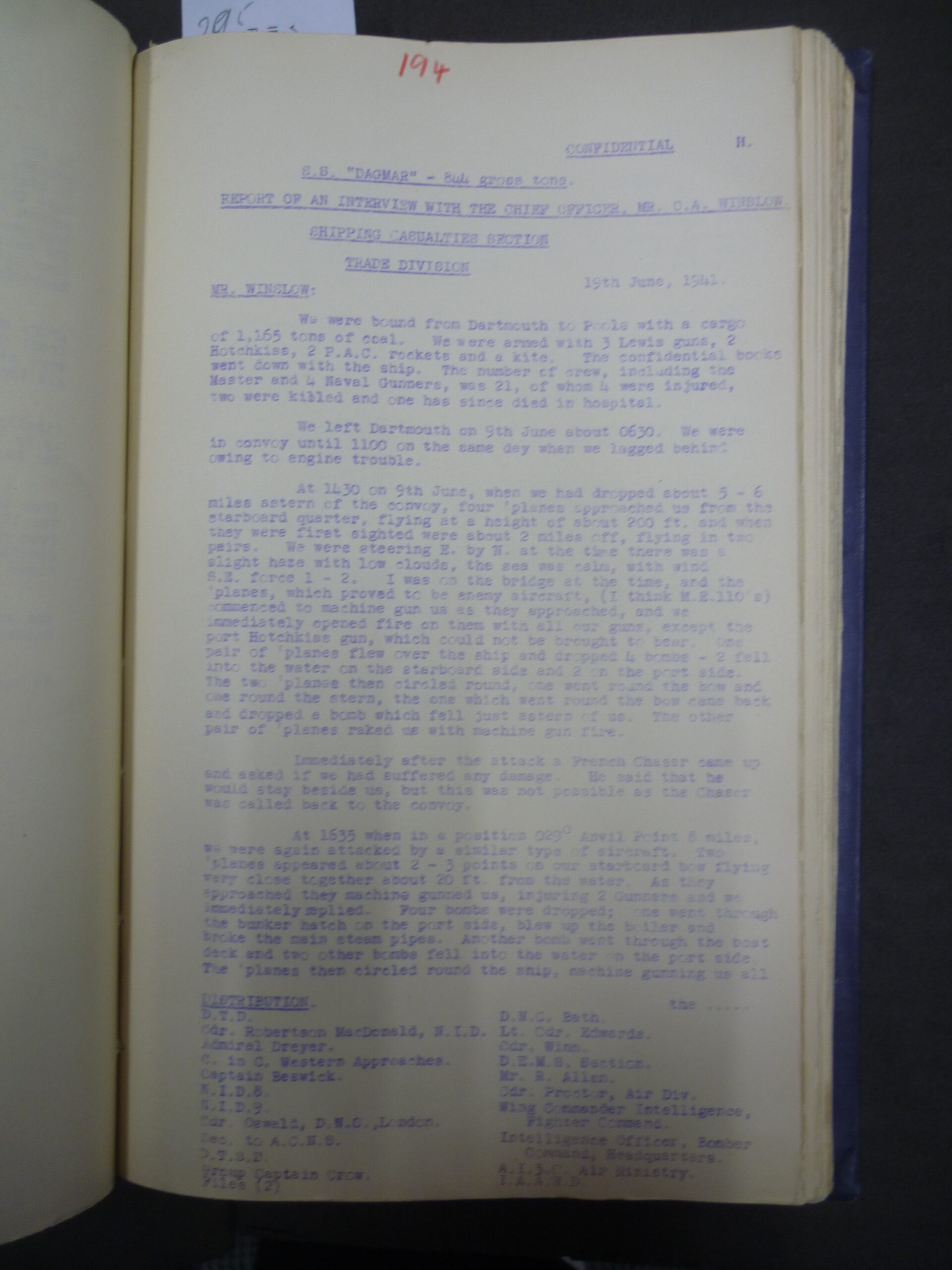 the time, splitting the bridge in two and injuring the Master, Captain W.H. Bentz. In spite of his injuries Captain Bentz continued to command and fight his ship throughout the action, showing exceptional organizing ability and leadership, and it was no doubt due to these qualities that the ship put up a very gallant fight.

The Chief Engineer was in the engine room at the time. He managed to get out, but we found him on the after deck with burns all over his body. He was very bad indeed and tried to jump over the side. The Second 0fficer, K.N. Vogn and myself managed to get through the debris in the accommodation and reached the chief Engineer and Second cook, both of whom were badly wounded, and carried them to the boat.

We lowered the starboard life boats into the water, but the port life boats had been smashed. We got all the men into the boats and pushed off taking with us 2 Lewis guns and some ammuniti0n.

After we had been in the boats about 50 minutes the French Chaser came back and picked us up. I told the Commander I would like to go back and try and tow the ship in and beach her. The 2nd Mate, 4 sailors and myself, transferred to another Chaser and returned to the ship but as we were doing so, she capsized and sank still burning furiously.

Two A.B’s Nielsen and Hulgaard assisted at the guns throughout b0th attacks and in spite of machine gun fire from the aircraft remained at their posts.