Report of an interview with the master of the S/S Elena R.

My vessel was painted with a black hull, white superstructure, and yellow funnel, and we were carrying a cargo of 6929 tons of wheat, and our draft was 24.3″ forward and 24 feet aft. Our speed was 9.5-10 knots.

At 10.35 p.m. we were abeam of Portland Bill distance 7 miles, course N.49.E. About 11.20 p.m. we were abeam of the Shambes. On making this position I ordered the wheel to port, and the steamer had just commenced to turn to port when we struck a mine. The explosion appeared to be just behind the bridge and at the bottom of the vessel. It was extremely powerful and I had the feeling that I was thrown up and struck my head on an awning bar. The dynamo was immediately put out of action, and the engine after racing for a few minutes stopped abruptly. The hatches of number 2 hold were blown off and the bridge was covered with water by the explosion. The steamer commenced plunging, and I immediately ordered the crew to take to the boats. I went round the vessel to examine the damage and I found the derrick at the crossbunker had been blown off at its base and lying on the deck. The davits of the service boats were blown away, and the boat smashed.

Water had entered the engine room and stokehold and the floors were blown up.

Having satisfied myself that we could not save the ship, and the wireless station being completely smashed I fired 2 distress rockets which were observed, and the Shambles light vessel replied to them.

I then decided to leave the vessel myself, and I got into the lifeboat. In launching the lifeboats the starboard lifeboat which shipped four men was caught by the swell, and was in danger of being smashed against the vessel. We therefore released her, and the remainder of the crew got into the port lifeboat which eventually I myself got into, and I was the last to leave my ship.

The wind was southerly and there was & strong breeze, visibility moderate.  As we left the vessel I 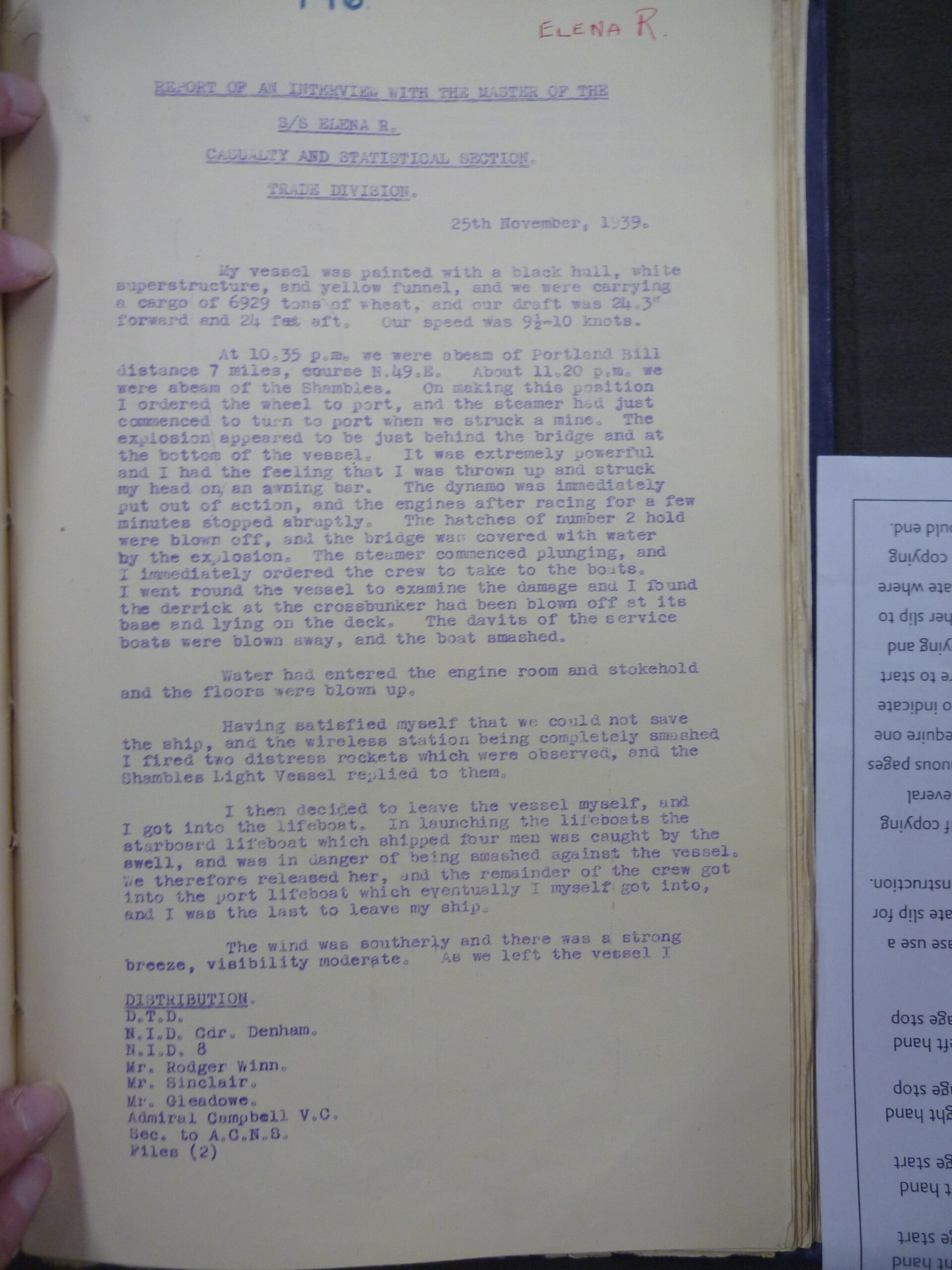 saw smoke coming from the engine room, and I expect this was caused by fire in the oil bunkers. We made for the Shambles Light vessel which we boarded together with the members of the crew in the other boat, and after about half an hour observed dense smoke coming from our vessel and saw her sink.

Two lifeboats had come out from Weymouth and we were taken ashore by them and landed at Weymouth about 1.30 a.m. on the 23rd November.

The crew were accommodated in the Sailors Home and Salvation Army, and the Officers at the Golden Lion hotel.

I was asked to give details 0f the loss by the Naval Control Officials, and I gave them full particulars. At 10 a.m. the Admiral at Portland sent a car, and I with the Chief Engineer, and Lookout man were interrogated by him. He gave my agents a letter for me to take to the Admiralty on my arrival in London. I als0 made a statement t0 the Receiver of Wrecks.

Three men were slightly 1njured in the boats and they were put into hospital. They are J. Lelakas, Carpenter. V Sitaras, Sailor, and A. Georgopulos, Deck Boy.

I received instructions to proceed with my crew to London, where I arrived at 9 p.m. on the 23rd November, 1939. 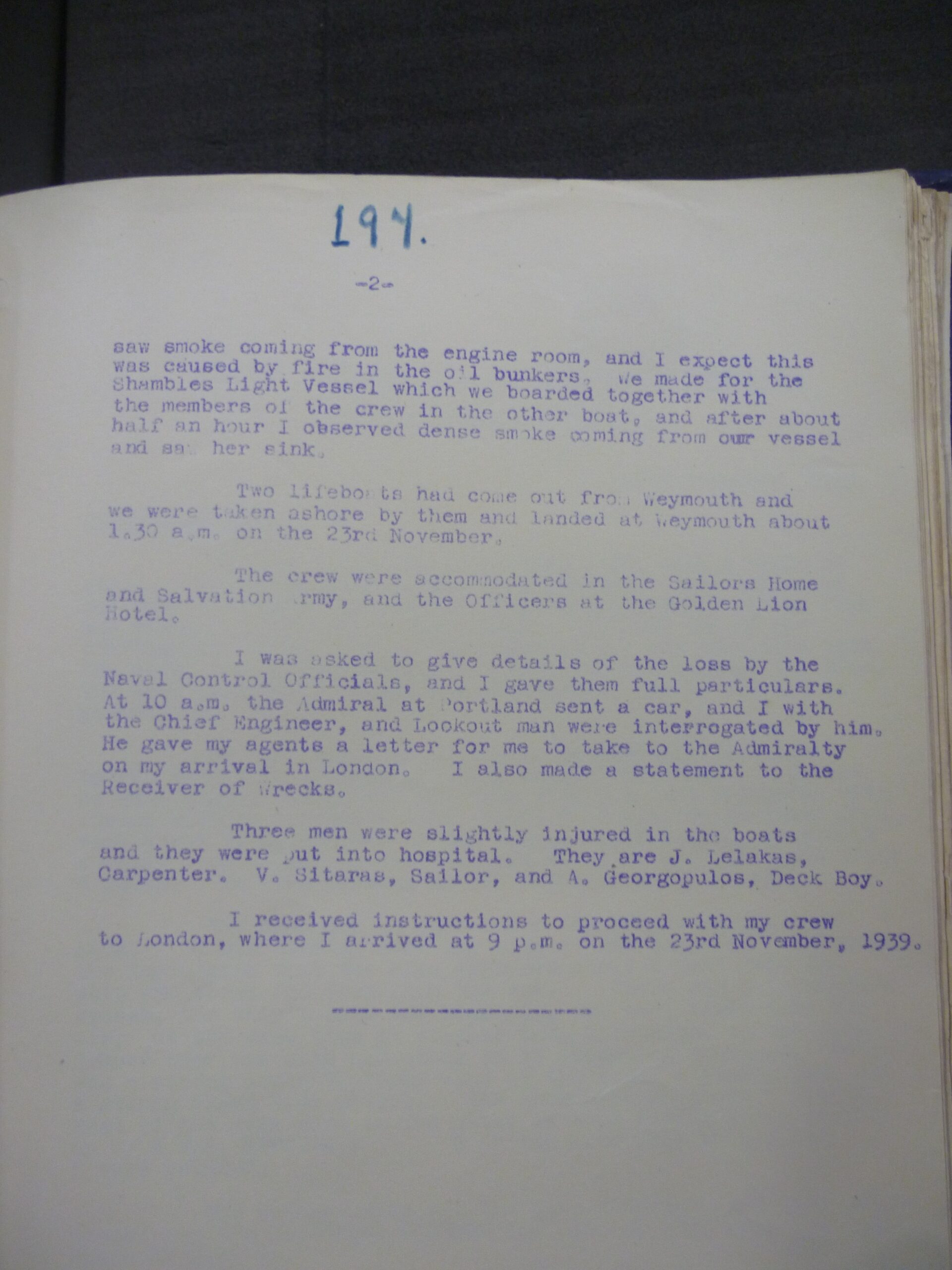 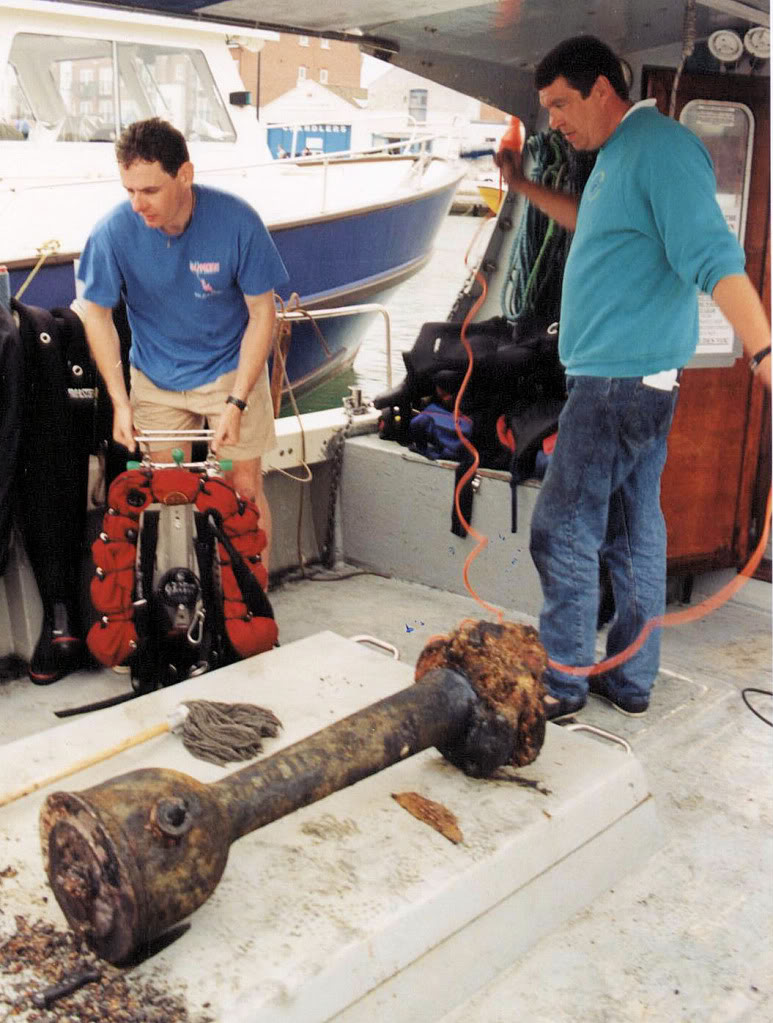