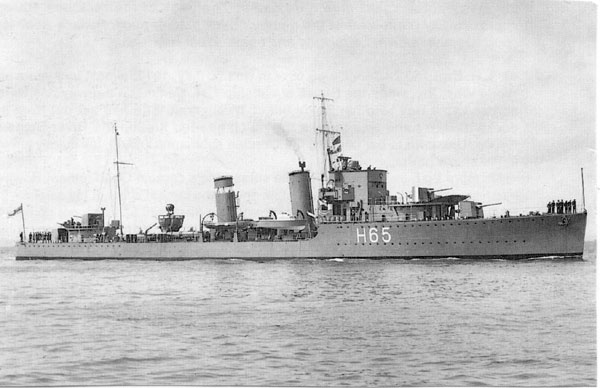 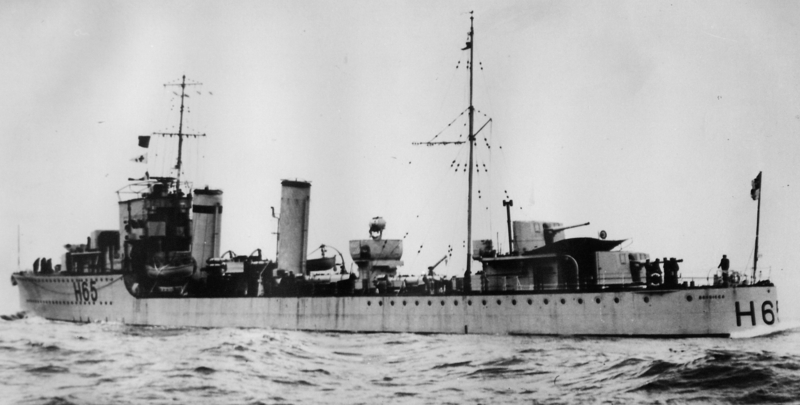 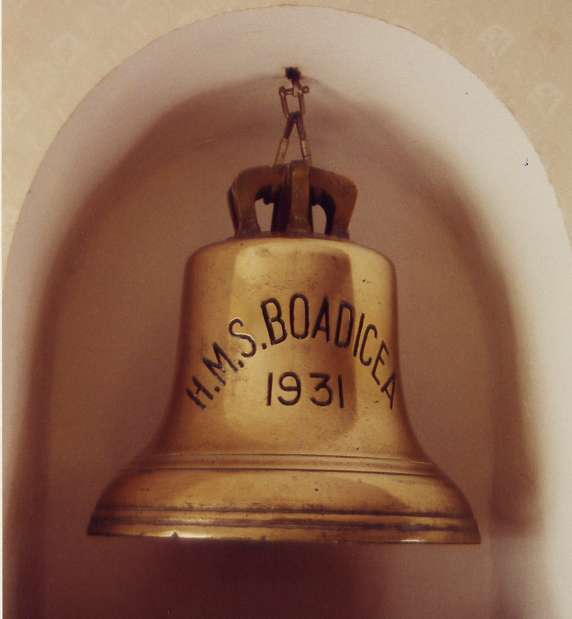 HMS Boadicea was a WW2 destroyer which had a very active career. She was completed & commissioned on the 2nd June, 1931 and immediately sent to the Mediterranean where she was involved in the evacuation of British Nationals at the start of the Spanish Civil War. Boadicea was not involved at Dunkirk because she was being refitted during this period. Her operational duties restarted c. 9th June, 1940 when she went to Le Harve to protect the evacuation of the 51st Highlander Division. During this operation just off the French coast between Fécamp and Dieppe, it is recorded that she was attacked by nine Junkers 87 dive bombers. The first attack missed by some 30 metres to starboard but during the second wave there were three hits. The first bomb penetrated her deck and entered the engine room and burst but did not explode. The second penetrated her aft engine room and exploded, killing all the engine room personnel except one. A third bomb entered the after boiler room and passed through the ship’s bottom without exploding. The third attack missed, the bombs falling to the portside. Apart from a skeleton crew which managed to stem the leak, the crew abandoned ship. The Navy were able to tow her to Dover and then on to Portsmouth for repair.

HMS Boadicea was fully operational again by the February, 1941. She was sent to Scapa Flow to join the search for the Scharnhorst & Gneisenau. In November, 1941 she engaged a French destroyer which hit her with a 5 inch shell causing minor damage. Within days she rescued 425 survivors when the troop ship Viceroy of India was torpedoed.

During during convoy duties to Russia she was badly damaged by ice. After yet more repairs, July, 1943 found her on further convoy duties in the South Atlantic where she rescued 220 survivors from MV Incomati. Next she was in another major action escorting the initial assault various craft for the Normandy landings.

It was the next action on the 13th June, 1944 that finally ended her heroic service. Escorting more craft across Lyme Bay, she was attacked by a German Aircraft which deployed a torpedo. It hit, and detonated ammunition in the forward magazine splitting the ship in half. She sank in minutes drowning 150 of the crew, only about twelve were saved.

Today HMS Boadicea, a war grave, lies upright on a sandy seabed at depths of between 47 to 62 metres, 16 miles SW of Portland Bill. Divers record that she stands about 6 metres from the seabed and lies on a small reef which causes her to slope slightly upwards towards her forward section. There is a large gun on the stern and other anti-aircraft guns can still be identified. The bow is missing.

Reference 1 – Dive Dorset page 52 to 53 which also has a photograph courtesy of Wright & Logan, Portsmouth.

HMS Boadicea (H65) was a B class destroyer of the Royal Navy that saw service during WWII.

Authorised in the 1928 ship building programme HMS Boadicea was laid down at the Hawthorn Leslie & Company Limited yard at Hebburn-on Tyne on the 11 July 1929 and was launched on the 23 September 1930 and completed on the 7 April 1931.

At the outbreak of the Second World war Boadicea was attached to the 19th Destroyer Flotilla based at Dover during which time her role was the escort of troopships. Her earliest major engagement of the war was in support of the evacuation of the 51st from Le Havre in June 1940. During this action she was extensively damaged and needed to return to Portsmouth for repair. During 1942 and 1943 she served on convoys to Russia and in support of Operation Torch; the invasion of North Africa..

Boadicea was sunk on the 13 June 1944 while escorting a convoy of merchant ships in convoy EBC-8 from Milford Haven in support of the Normandy invasion. She was possibly struck by an Henschel, Hs 293 which was a WWII German anti-ship guided missile ( a radio-controlled glide bomb with a rocket engine slung underneath it. It was designed by Herbert A. Wagner). It would have been launched by a German Dornier, Do 217 bomber.

Only 12 of her crew survived. However, official British reports attribute the sinking to a torpedo launched by a Ju 88 aircraft which disguised itself in a formation of RAF Beaufighters.

Her wreck lies 16 miles South West of Portland at 50:28:12N, 02:29:30W in 53 metres of water. The bows of the ship are blown off forward of the engine rooms. The stern section is upright and reasonably intact. The wrecksite is designated as a protected place under the Protection of Military Remains Act 1986.