The MINERVE was handed over to the British at the beginning of the Second World War. She was used on clandestine missions along the coast of Norway. Towards the end of the war she was, because of her different design, bombed by the Americans. There were fortunately no casualties. She was used as a training vessel till 1945 and was under tow to the breakers yard when the tow cable snapped West of Portland. 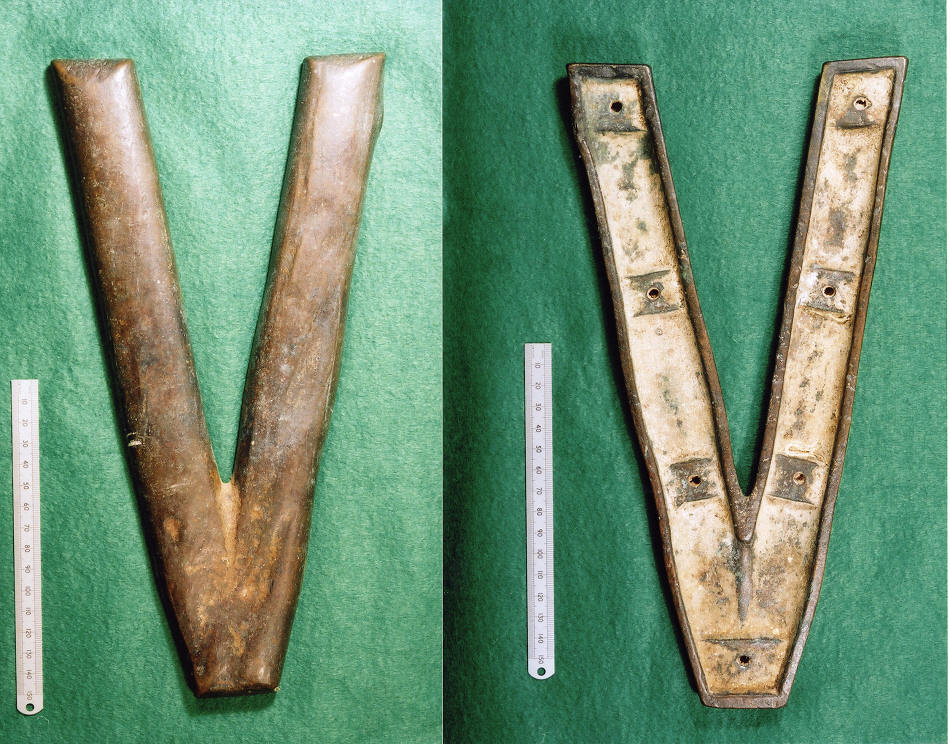 The the ‘V’ from this submarine recovered by diver Brian Dove in the late sixties. It has been a suggested that this ‘V’ was left on for ‘Victory’ but we can find no proof. The Cross of Lorraine, symbol of the Free French can be seen on the conning tower in the photograph above. The rare photograph below, courtesy of ‘Periscope Publishing’ clearly shows the ‘V’ in place prior to the war. 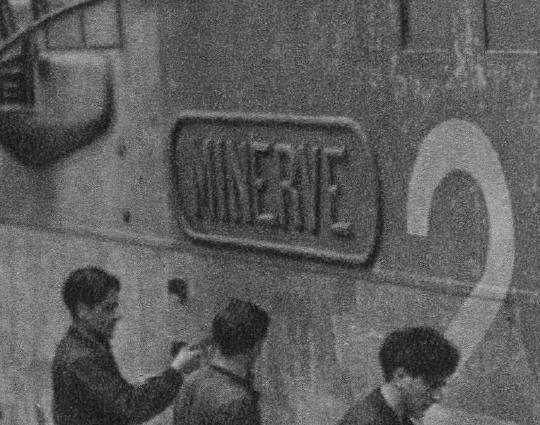 During the WW2, my grandfather (Yvon Rabanel) was with the Free French in England (de Gaulle’s forces) and he sailed on the Free Submarine MINERVE (9th flottille Dundee – HMS Ambrose) and next on Free French Submarine Curie (Alger, La Maddalena, Malta).  I am looking for information or address about the British sailors, who were on Minerve and Curie during the WW2.
So far on the MINERVE I have noted: Sub Lt. Brake, Sub Lt. Wilkinson, Sub Lt. Boex, & Telegraphists, Aldredge and Crick.

MINERVE was a French submarine, one of nine of the Daphné class.

Obituary of Jean Coron, a French war veteran, coal miner and engineer who was born on the 8th June, 1920, in Villebaudon, Normandy, France, and died: 19 January, 2010, Lochore, Fife, aged 89.  Served on MINERVE.

“JEAN Henri Leon Coron spent the war years as a torpedo man in a Free French submarine patrolling the North Sea and on the hazardous Murmansk run. He also served in the Med with a British-built sub, the Curie, and his war service earned him the highest French honour, the Legion d’Honneur.

Recruited to the French navy aged 17 in 1937, Jean was initially stationed at Cherbourg before the outbreak of hostilities, but after the invasion of Nazi troops and the fall of France in 1940, he was forced to leave his native country. He was waiting to embark on the submarine MINERVE, which was under repair, when German troops were spotted and he and his crewmates had to flee the invasion on board a trawler to Southampton.

On arrival in Britain, they were imprisoned, but Jean and others made it clear that they wanted to fight with the Allies and were sent to London. Once there, Jean joined up with General Charles de Gaulle’s Free French forces in the struggle to free occupied France.

By coincidence, he also met the captain of the MINERVE, which had limped across the Channel on one engine. Jean rejoined the crew of the newly repaired sub, which operated out of Dundee.

For the remainder of the war, he fought alongside men of six other nationalities at the HMS Ambrose submarine base in Dundee, from which the 2nd and 9th flotillas operated. He served on patrols in the North Sea, most escorting convoys in case they were intercepted by German battleships, and saw action around the Norwegian coast.

In April 1941, on a mission to sink a cargo ship in Norway’s fjords, Jean and his crewmates almost met with disaster. A 7,000-tonne tanker carrying aviation fuel appeared in front of the forward tubes. He fired on command, sending torpedoes smashing into its hull, sinking the vessel.

Unfortunately, the resulting explosion exposed the sub’s conning tower, which displayed the tri- colore. The tanker had an escort of three German gunboats and the submarine immediately came under heavy fire. Shells hit the hull, but they managed to dive again beneath the ship they had sent down. The MINERVE landed on the bottom and lay trapped on the seabed at 120ft for 22 hours, unable to resurface.

Conditions were terrible and the air in the submarine almost ran out, with even the rats in the bilge deserting their stations. Jean suggested connecting the compressed air from the torpedo tanks to the main tanks might be enough to raise them from the sea bed. It worked. This shot the submarine to the surface like a cork out of a bottle and by luck it was at night so they managed to limp home to Dundee on the remaining damaged engine.

After the war MINERVE ran aground while under tow on Chesil Beach, Portland Bill (off Weymouth in the English Channel) and sank in position 50°31’01N 02°27’06W and lies badly broken up in 10 meters of water.

She was wrecked on 19th September, 1945 after the towing hawser parted.

MINERVE was attacked by a Coastal Command Liberator, piloted by Mick Ensor (see Ensor’s Endeavour) on 10.10.43. The rocket attack  left two crew dead. I have notes from public records office and photocopied photographs. The attack took place about 300 miles west of Brest. MINERVE was on the surface repairing a diesel engine when attacked

“10 October was Mikes seventy-sixth operation, it had already lasted for over fifteen hours when he spotted a submarine on the surface about 300 miles west of Brest.  His Liberator was fitted with HVAR rockets [1] carried on mounts affixed to either side of the fuselage just below the cockpit.

The submarine was the MINERVE, off course and therefore not reported as being in the area.   He fired eight of the 25 lb solid head rockets hitting the submarine at least twice.  He then decided to depth charge his victim but reported later that fortunately he had observed large letter on the side of the conning tower which he thought read P 35 (in fact P26) which he had never seen on a U-boat.  The MINERVE had set off a recognition flare in the conning tower but the colour was not seen only the smoke and that was thought to be from the rocket damage.  See photograph.

Fortunately the attack was called off, but the two rockets had pieced the hull, one below the waterline.  Two French mechanics were killed.

Details from the Wensleydale Site:

“Around the 10th of October 1943 Wensleydale was ordered to first find and then escort the Free French Submarine MINERVE (P26) back to port.  Ken England remembers that the submarine was transmitting the morse code letter ‘A’ on a known frequency and by manning our MF D/F set we were able to get a fix on the sub’s position.  This submarine had been the victim of ‘friendly fire’ and was unable to dive.  A Liberator, piloted by Mick Ensor spotted a submarine about 300 miles west of Brest.  The submarine was attacked with eight 5 inch rockets.  One rocket entered the starboard side just below the external torpedo tubes.  Two men were killed.  One by the rocket head and another by a fragment of the pressure hull. The submarine was off course and not reported in the area.  Pilot Mick Ensor was cleared of any blame.  The damage to MINERVE proved very useful to navy intelligence.  Many photographs were taken of the damage, angle of entry etc.  The projectile was said to be virtually undamaged, but was unfortunately thrown overboard as it was considered likely to explode”

In the book written by Vincent Orange [2],  ‘Ensors Endeavour’ there is a very similar report and also images of the attack: 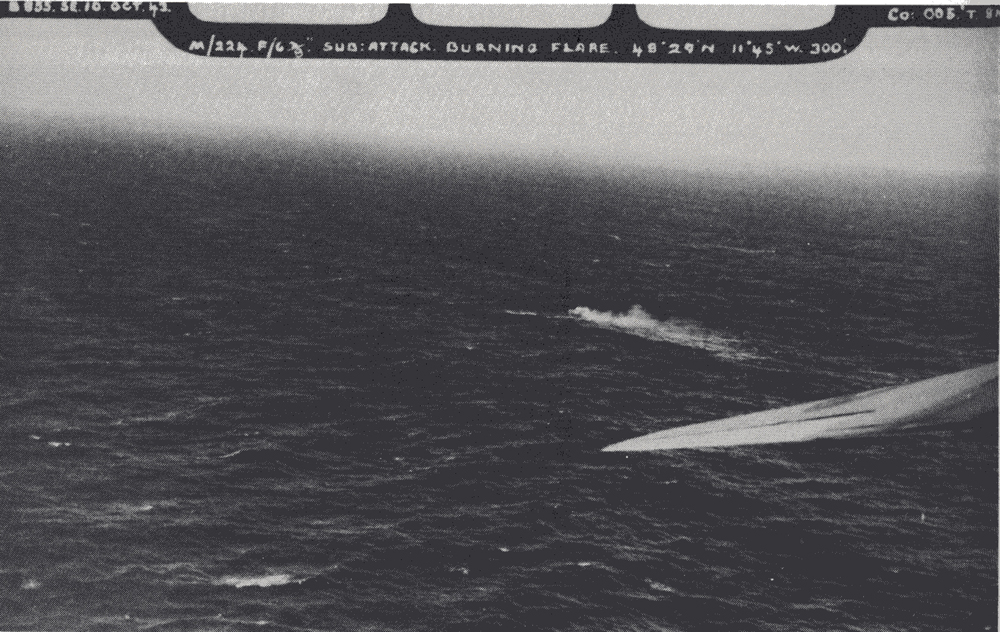 It would appear that Mick Ensor and his flight commander Arthur Clouston visited (sensibly in plain clothes) the MINERVE on her successful return to port. A comment apparently made by another pilot about this visit as being “very brave”. On arrival at the harbour, they were horrified to find that the dead French mechanics, killed by one of the rockets were still in the engine room rotting and in a putrid state! Mick did apologize to the crew but understandably they were said to have glared angrily at him causing him to leave fairly hastily.

[1] – The HVAR (High Velocity Aircraft Rocket) c. 1942 was developed for tactical ground attack and anti-shipping strikes. There were two types: one with a 60lb explosive head and one with a 25 lb solid head. The former was said to have the effectiveness as a six inch shell and the latter which had a higher velocity had great penetrating power. If the rocket motor was still burning on the 25 lb version when it entered the water it could maintain its effectiveness to 100 feet. It was this weapon which was fitted to the Liberator used by Mick Ensor when he attacked the MINERVE.